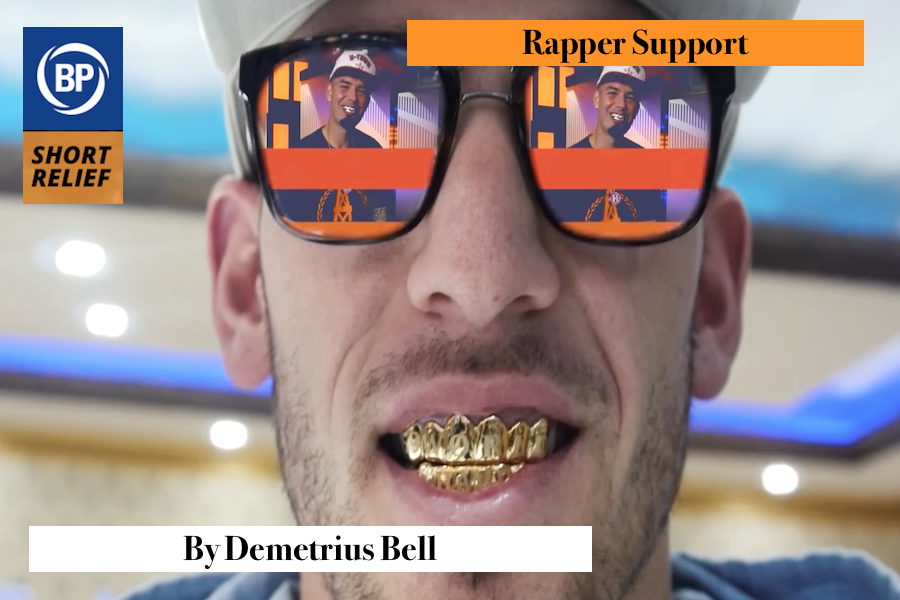 Game 1 of the World Series is today and I’m sure all angles of the World Series have already been covered not only on this website, but all the other baseball websites across the internet. If you’re coming to my particular corner of Short Relief for Serious Baseball Analysis, you’ve moseyed on into the wrong part of town there, partner. Instead, I’m going to give you some Totally Serious Baseball Analysis, and talk about the true X-factor that is going to tip the balance of what appears to be a very even matchup on paper.

The X-factor is Rapper Support, and if this is truly the deciding factor, then the Nationals are in trouble. If the rappers who rep D.C. are getting behind the Nats, then they’re being very quiet about it. You’ll be hard pressed to find any evidence of guys like Wale, Shy Glizzy, or even Logic showing up at the Nats game showing support for the home team. It’s honestly a miracle that the Nats have made it this far without them. You have to get the local wordsmiths behind you when it’s time to win, and it seems like the Nats haven’t made that connection yet.

That’s bad news for Washington, because Houston has connected with their local MCs and the connection is strong. Just last weekend, the Astros had Slim Thug make the ‘Play Ball’ call for Game 6 of the ALCS. Slim Thug shared a suite with the legendary Willie D of the Geto Boys and the inimitable Paul Wall. Speaking of Paul Wall, he remixed one of his hit songs into a fight song for the Astros — all the way back in the 2005 World Series! He realized that the 2005 song was a jinx so he waited until the Astros won it all in 2017 before he released “World Series Grillz!” Chamillionaire even got in on the civic spirit! With that type of power pulling for your team, it’s no wonder that the Astros were impossible to resist.

The support didn’t stop there. Travis Scott took a huge shine to the team when they made their run to the 2017 title, and surely the team will be ready to give him another trophy to hang out with. Then there’s Bun B, who’s one half of the powerful UGK duo (the other half being the late Pimp C) and also an active fan of the team (here’s “Crush City”) and has even worked with the Astros to design some fashioniable hats. Bun B is one of the titans of the Houston rap game, and it’s clear he and the rest of the legends from H-Town are down with them ‘Stros and them ‘Stros are down with them.

If any of y’all have proof of D.C. rappers showing similar support for the Nationals, please point it out. If not, then Washington may be in serious trouble because the Astros have the huge X-factor of Rapper Support. 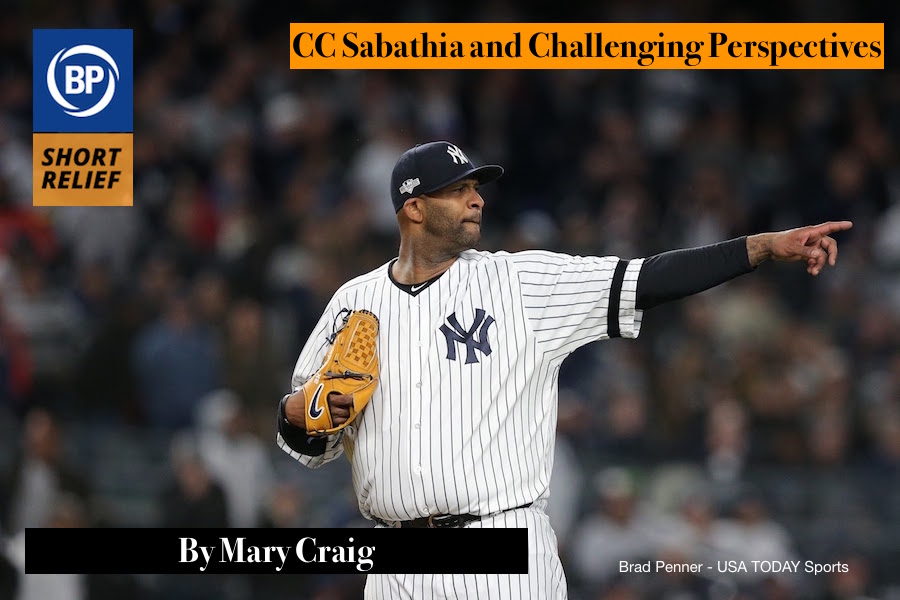 A large portion of my involvement with baseball rests on rooting for CC Sabathia to fail. I was 15 in 2007 when Cleveland played the Red Sox in the ALCS, and the entirety of my emotional state was dictated by the outcome of each game. Every opposing player was the enemy and every member of the Red Sox was categorically Good; I hated CC Sabathia and loved Josh Beckett simply because of the uniform they donned. Watching my team beat the likely Cy Young winner in both Games 1 and 5 filled me with far more glee than did the other two victories in the series.

In 2009, Sabathia signed with the Yankees, and my hatred for him was revived. Not only was he a pitcher who could beat my team any given day, he was now a member of my sworn enemy. In his 11 seasons with the Yankees, he made 44 starts against the Red Sox, collecting the win 18 times and the loss 15. He was, naturally, phenomenal against Boston in his first two seasons with the Yankees, but his third season revealed his fallibility. The Red Sox scored 15 runs off him in 25 innings, a miraculous feat and one in which I reveled for many months.

And then age came for both Sabathia and me; he struggled to pitch a full season, and I struggled to muster up my old hatred for him. Perhaps it was the fact that I had watched my team win three World Series in my short lifetime, or maybe I had just found new targets for my hatred, but whatever it was, I no longer viewed Sabathia as the enemy.

When he checked himself into rehab for alcoholism in 2015, I started seeing him first as a deeply injured yet resilient human being and then, in a distant second, as a pitcher. My vitriol became redirected toward the system that enabled his alcoholism and encouraged me to fervently root against him for so many years. For the first time, I became fully aware of what MLB allowed to happen to its players behind closed doors, and I wondered how many more were wandering down the same path only to find a very different destination.

In his 19 year career, CC Sabathia experienced it all, from the highs of victory to the lows of defeat, both public and private. There are perhaps few careers that better encapsulate what it means to be a professional baseball player. Eight years ago, I could never have imagined myself feeling like baseball had lost something in his retirement, but eight years is a long time, and life is a remarkable teacher if you allow it to challenge you. It certainly challenged Sabathia, and baseball is all the better for his constant ability to rise to the occasion. 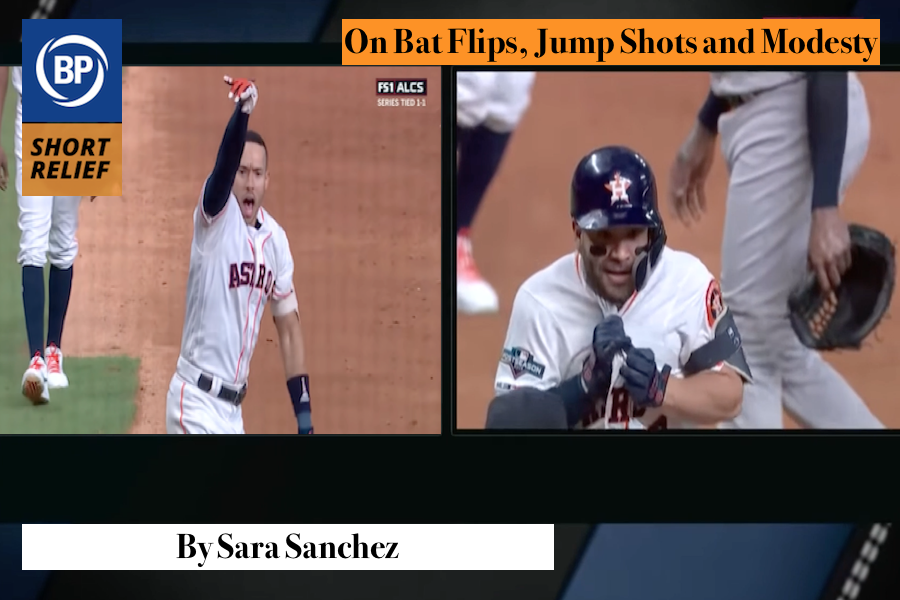 There are few things more exciting than a walk-off victory. It’s such an exquisite moment of release and instantaneous gratification (or heartbreak) in a game that isn’t really set up for instantaneous anything. It’s a perfect moment in sports. The only way to really amp it up is with context — say walking off a playoff game with a home run.

The Astros treated baseball fans to two different iterations of this magic in the last week, demonstrating not just the brilliance of the walk-off, but the way the walk-off magnifies both the moment and the player.

In Game Two, the Astros were staring down the very real possibility of dropping the first two games of the ALCS to the Yankees and completely squandering home field advantage. Carlos Correa would have none of it. He took the first pitch he saw in the bottom of the 11th to the opposite field for a no doubter. It was a huge moment, and Correa knew it. I’ve long hypothesized that not all bat flips are the same. Correa’s bat flip after he sent his 102.6 mph bomb towards right field was more of a bat drop (you know, like a mic drop, but with a bat). And he wasn’t done with the bat drop. He raised his hand to his ear as he headed towards first and then pulled up for a fake jump shot halfway between third and home. It was equal parts baseball and theater for a player who isn’t shy about playing with his heart on his sleeve.

In many ways it was the polar opposite of José Altuve’s walk-off in Game Six.

In a game situation that was every bit as big as Correa’s, José Altuve came to the plate with a runner on first and two outs in the bottom of the ninth inning. The Yankees had just tied Houston in the top half, stunning the crowd ready to party. He was facing flamethrower Aroldis Chapman. Chapman threw Altuve a slider in the upper part of the zone, and Altuve did not miss it. He drove a two-run bomb to left center field, stunning the Yankees closer and delighting thousands of Astros fans and Yankee haters.

Altuve is no stranger to the bat flip, but there were no dramatics with his bat on this particular home run. In fact, as he rounded third and headed home he wagged his finger at his teammates and appeared to clutch his jersey near the neck.

Ken Rosenthal asked him why he was gesturing for his teammates to leave his jersey alone. Altuve laughed when he said, “I don’t know. I’m too shy. Last time they did that, I got in trouble with my wife.”

It was a purely Altuve moment and not coincidentally also a beautiful moment for baseball. It was every bit as memorable as the Correa bat drop and jump shot. It was a reminder that baseball’s best celebrations celebrate the players and bat flips, modesty and all.