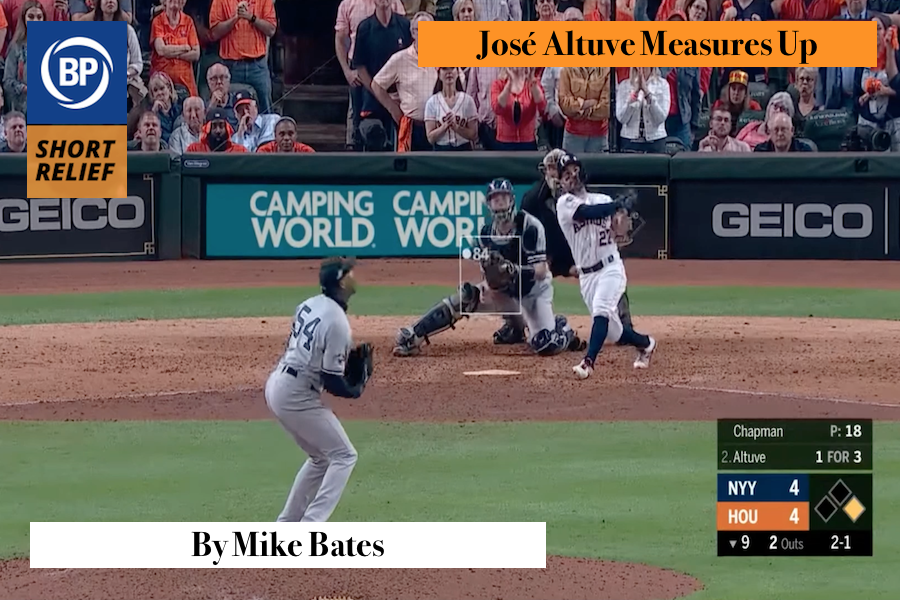 José Altuve had himself a pretty good weekend, sending the Astros to the World Series with a mighty wallop that reified his status as one of the best players in the game today. He’s a wonder.

Altuve is, by any objective assessment, a little guy. He is listed at 5’6”, but this is almost certainly an exaggeration. How do I know? Because I am listed at 5’7” and, friends, I am not 5’7”. I’m 5’6” and shrinking. We little guys exaggerate our height, especially when we’re occasionally forced to pal around with giants. 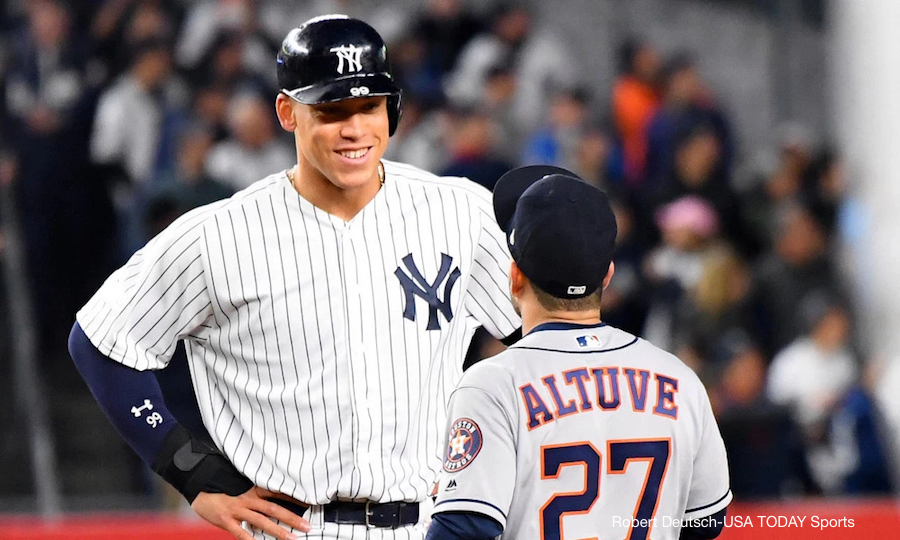 You see, Altuve’s constantly getting photographed with Aaron Judge, just like I’m always asked to stand next to the tallest guy around. Look at Judge in that photo above, lording it over the second baseman from on high. He clearly gets off on it.

He’s not alone. My friend Kevin loves to pose with me. He’s 6’6”. I was at the Upper Peninsula Sports Hall of Fame induction ceremony this summer, representing my late great-grandfather, and at the podium, I had to follow the 7’1” center who played for the University of Indiana. These tall guys think that it makes them look all the bigger when they dwarf us.

But, see, that’s part of our strategy. The only good thing about being constantly seen with and compared to tall people is that the specific difference in your heights doesn’t matter much. It’s easy to see if you’re 5’6” when you stand next to someone who’s 5’8”, but if you are standing next to a Goliath, all people can see is there’s just a massive difference. No one breaks out the yardstick and pencil and lines you up against a door jamb. Nobody makes you stand back-to-back. So it actually become pretty damn easy to fudge your height by an inch or two.

And, let me tell you: we all do it. It’s just instinctive. And so long as we’re not trying to get on roller coasters, it’s a valid strategy, and not one of you should begrudge us our extra inches.

Anyway, that’s why I love watching him play so much. I identify with the only player in baseball who has to ask me to reach something for him at a bookstore. I don’t know where his power comes from, but I marvel at it. Seeing him succeed makes me feel good.

He has sent Aaron Judge home for the winter, where he can console himself by being able to put up Christmas lights without a ladder. Life will continue to be easy for him. José Altuve had to work for this moment, and has come up big for us little guys again. 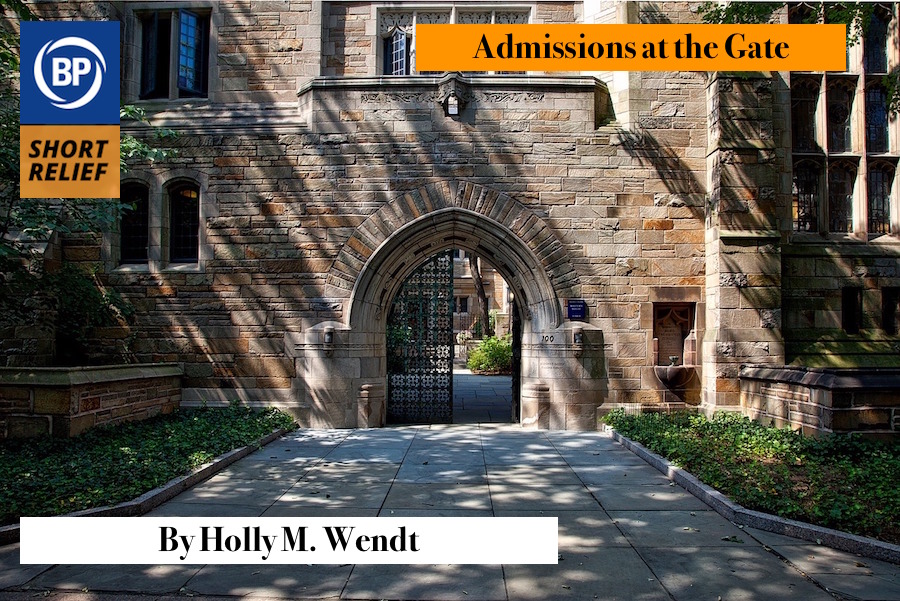 In addition to baseball playoffs, autumn in my life means admissions events at my small liberal arts college. They’re really a year-round endeavor — the July dates are already in the calendar — but I’ve got thirty years of conditioning that tells me the last Monday of August is actually the start of the new year, and so when the first of these dates land in October, it’s still a beginning. Despite my intense antipathy for autumn, it makes a perfect backdrop: the campus is dotted with maple trees caught at the most evocative part of their splendor, a green to scarlet ombre that says change. When high school students and their parents and occasionally a sibling or two sit with me in a classroom or the department lounge, we talk about change, we talk about becoming, about futures and hopes and paths for arriving.

A few hours later, the students go home with a new folder full of information and an invitation to visit again or to sit in on some classes and hopefully an inclination to spend their collegiate journey in these halls, under these trees. Next weekend, the same students might visit other colleges; surely they’re getting emails and mailers from any three dozen places that all cry out pick me. Choose this. Each institution and program lays out its red carpet, its virtues and strengths, says imagine yourself here. Imagine you amidst all these successes, imagine you being one, too.

Today, there are no more twists in the path of the MLB season, and we have only to see where the final stretch leads, but there are still choices left. Whom to root for is one choice, if your own favorite team is out of it. If you’re someone who hasn’t made such a declaration, you’ve got before you that heady freedom of picking a team for the first time.

During campus visits, some families don’t hide that what they really want is for their student to go to a big school, maybe the one that matches the logo on the sweatshirts they’re wearing, or maybe one that might lead to football tickets or an experience of college that looks like what college does on TV. Alumni bring their children to visit, to hope for another generation to follow in the same footsteps, to continue a tradition. Hopefully, the person who will actually be spending their four years on a campus is the arbiter of the decision, but it can be a contested circumstance. There’s a lot riding on picking a college, so many factors to consider. Choosing a team to cheer for matters so much less. Celebrate how little it matters. Enjoy that part.

In October, baseball makes its own red carpet, its glittering shows of prowess on the playoffs’ lit stage, the season’s most successful teams all collected in one place to display their wares. And, behind the curtains where you’re not supposed to look, each team with its broken windows, warped doors, all the shadow and damp, the money paid and the money owed. Every team has the same ugly parts because the league has the same, so pick for other reasons: the unlikely climb from Wild Card play-in or the budding dynastic dominance, that one player you like or the other, pitchers wielding bats or not, old grudges or favorite time zones. It doesn’t matter. Pick something different the next game, the next season.

Of course, too, there’s always simply rooting for baseball, for more of it, rather than less, which is where I invariably find myself, if for no other reason than the end of baseball means winter, means the end of one more thing, and I’m not ready. I’m never ready. 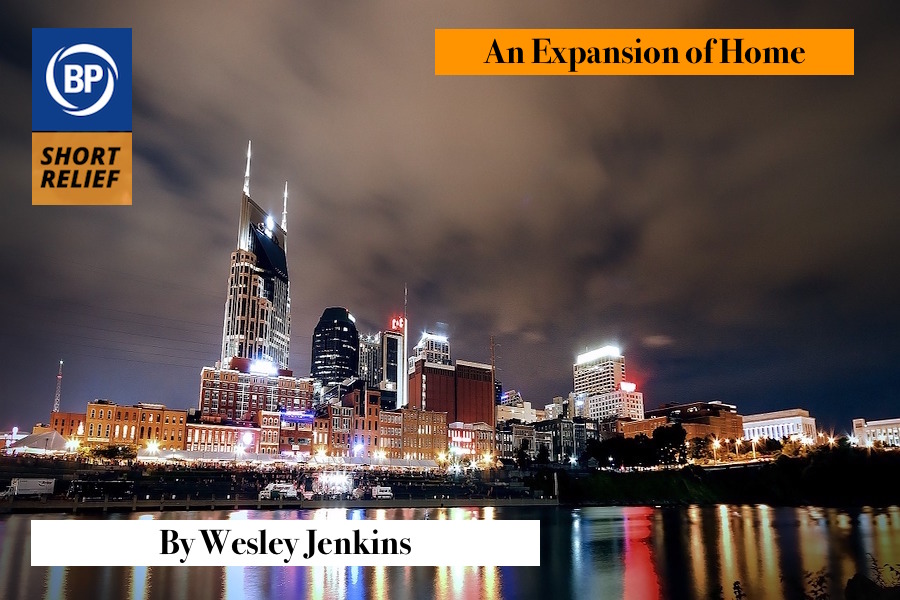 Growing up, most of my friends were Braves fans. It made sense. What kid wouldn’t love a team that made the playoffs every year and sported Chipper Jones as its face? This was Nashville after all, so Chipper Jones was about the epitome of athletic prowess.

I chose the Reds. Ken Griffey Jr. made more sense as a role model to me: he had that smile, and that swing, and that elegiac quality where everything he did came easily, but he didn’t hold that over his less-deserving peers. If Chipper Jones was a Toby Keith song, winkingly irreverent, Griffey was “Ode to Joy,” soulfully monumental. Or at least that’s how he felt to me.

In the years since I picked the Reds as my team, the role “The Kid” filled has never really sat vacant. Brandon Phillips soon emerged with a similar smile and ineffable grace. Joey Votto, too, carried himself with a carefree looseness, at least when the game wasn’t on. Jay Bruce, Adam Dunn, Johnny Cueto, Jonny Gomes for a bit: all players that kept the spirit of Griffey, if not every transcendental aspect of him.

In other words, I’ve never found it hard to like the Reds, despite their unrelenting mediocrity. Even when they did make the playoffs, it was never for long and often it ended in the most heartbreaking of ways. (See: Roy Halladay no-hitter or the Johnny Cueto dropped ball game.) Which is how I’ve always been able to keep one nagging question at bay: If Nashville gets an expansion team, which team do I cheer for?

Expansion is baseball’s funny uncle. It usually brings a smile in passing, but spend too much time with the thought and it gets exhausting. Nashville has always made sense for expansion, especially now that it’s population has exploded. Nashvillians love the Predators and reluctantly cheer for the Titans. Nashville houses the best college baseball team in the nation, which has developed local kids like Sonny Gray, David Price, and Justus Sheffield. The logic is there; the idea brings an excited smile.

But how do allegiances change when your home conflicts with your history? Do I cheer for both teams, up until the point of playing each other? Do I forego the team I’ve followed my whole life for newer, potentially greener pastures? Or is this just another disconnect from a home I haven’t lived in for years now?

I usually push those questions away, but with the mock-ups of a potential stadium and a name decided (Nashville Stars), they have started to feel all too real. When that team arrives, I don’t think I’m a Nashvillian anymore. Already, most of the places I loved growing up have closed or changed. I don’t live there, hardly visit there, and generally struggle to recommend anything to do there. I’m not sure I belong anymore. And weirdly enough, the sport I love the most might cause the final push of my exodus. But at least I’ll have an activity to recommend.