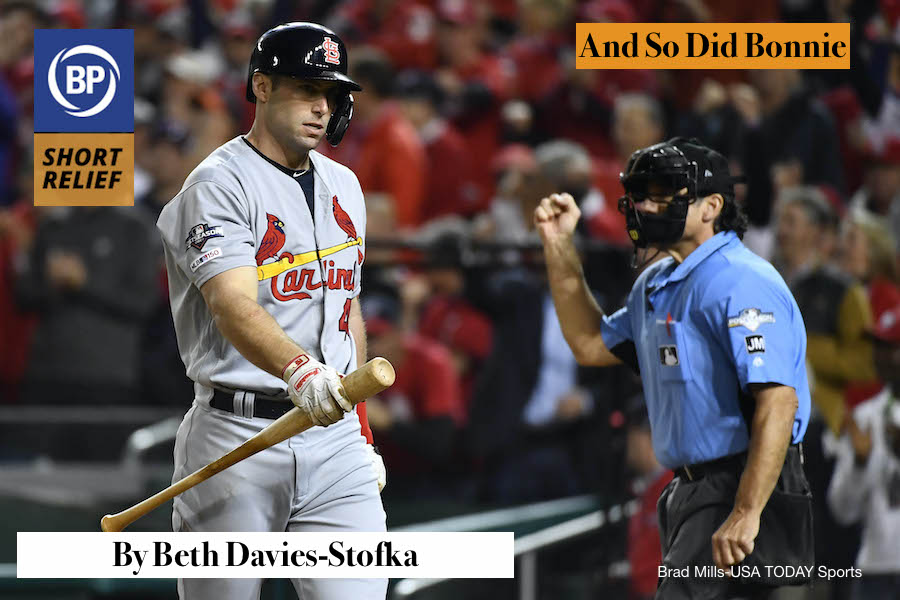 It was June, and the Cardinals were having a .500 sort of season; not good enough to generate much excitement, but not so bad that our hopes were crushed. Bonnie was holding her own. She ate and slept, and played with her usual precision, systematically destroying her toys. An asthmatic, she had some decent coughing fits. When her lungs started to flood, the vet put her on antibiotics. Through July and August, the Cardinals got a lot better, and so did she.

On the last day of the regular season, the Cardinals won the division. Bonnie, feeling the fall air, started sleeping on my lap. The day before the division series, she jumped and her paw came up lame. We splinted it. In Game 1, the Cardinals fell in the sixth, but they came back. So did Bonnie.

Atlanta bounced back in Game 2, and then rallied to win Game 3. Bonnie was an old cat. She was hobbled and full of fight, but If her paw didn’t heal, there were difficult conversations ahead. The Cardinals, down 2-1, had their backs to the wall. And so did Bonnie.

The Cardinals were shut out by the Nats in Game 1 of the championship series. Bonnie was struggling. She wobbled on her feet and lost interest in her surroundings. She started to fight for breath, and the Cardinals lost Game 2. In Game 3, the Cardinals got some offense. Hopes raised for another comeback. But despite seven hits, they left 13 on base. Down 3-0 in the series, they had one more chance. The vet gave Bonnie a massive dose of steroids, hoping to blast her windpipes open. It was her last chance too.

She never rallied. In Game 4, the Cardinals went down 5-0 in the first inning and it seemed all hope was lost. Then they came back with four runs to the Nationals’ seven. They went on fighting. They loaded the bases in the eighth, but Carpenter struck out. Swept in the series, the Cardinals’ season came to an end. And so did Bonnie’s. 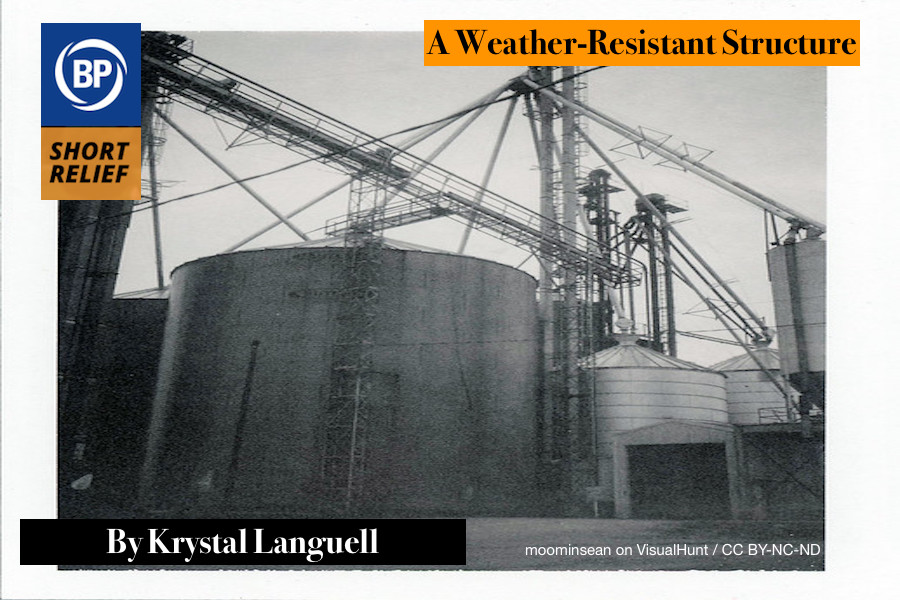 Do you want to know how it works?
I want to tell you what the machine does

Who knows the confusing structure
Who rolls out the dough, swings batter

Predict the trifecta, stand outside
There’s no trifectas in baseball 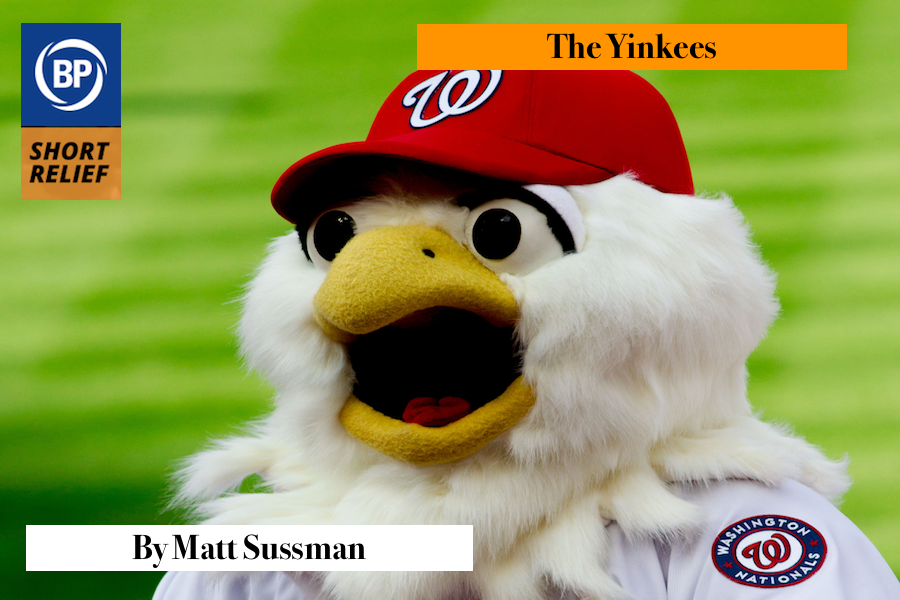 The modification of a sports franchise name is a noble process. You’re defining a brand for years. You can change it later but there are no takebacks. The Rays will always have been the Devil Rays. The Seattle Pilots were once a thing and therefore always will be. And over a century ago, they just went with “Sox.” Like, we all accept that quite freely.

When the Montreal Expos migrated south on a permanent basis, much thought went into their team name before they settled on the Nationals. They considered the Senators before realizing that it was a good name for a team that would relocate somewhere else. The Grays were a trendy pick, possibly not thinking ahead what their team colors would be, before the Nationals became the extremely agreeable and bland choice.

ESPN’s Pardon the Interruption, which has been shouting about sports for nearly 20 years, went name by name to, and I cannot air quote this enough, debate the merits of each. Then they got to the joke names. For whatever reason, Tony Kornheiser pushed long and hard the idea of the Yinkees as the new team name. The Washington Yinkees. Why the Yinkees? Who the heck knows! But I recall it would possibly annoy George Steinbrenner, and it was 2004 and that was all anybody in sports wanted to accomplish. And hindsight spoiler alert: he would not have cared.

Fifteen years later I still have the image of a small bearded sports scribe pounding the desk and yelling “THE YINKEES!” into a camera. We cared so much about trivial details back then and were more vocal about it. I’m not sure if video exists for public consumption, but perhaps Disney+ will give the people what they want and stream all the thousands of episodes. If it was 2019 the line “name them the Yinkees you cowards” definitely would have been uttered.

Instead, we have the Nationals, a name that joins the governmental likes of the Capitals and the DC United, paired with magical names like the Wizards and Mystics. (There is no football team in Washington DC, definitely not, nope.) Granted, they just went through a brand overhaul dumping the Bullets in 1997, and in that vein it may behoove them to distance themselves from the federal government, especially these days. They reached the World Series. They did it. The brand is at an all-time high, and there’s no better time to go out on top and change to something both satirical and supernatural, with a hint of online. That’s right. Coming next year: the Washington Cowards. 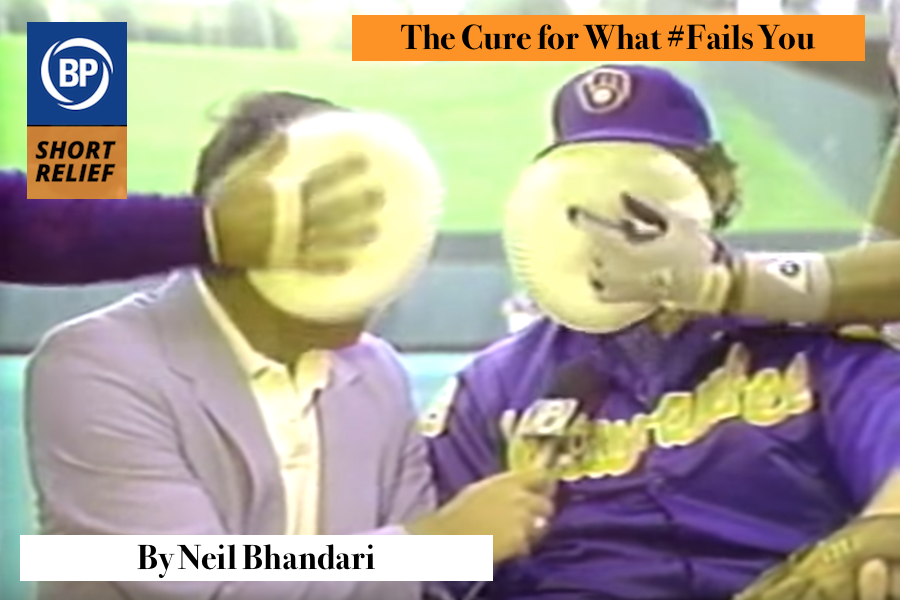 Is baseball boring? Not to me, but IDK — maybe?

Is it shedding fans at a dangerously precipitous rate? Probably not, but who am I to say? The powers that be certainly seem to think so.

In baseball, as in all things, the ~eye-test~ is no longer sufficient basis for the formation of opinions amongst the thoughtfully engaged. Our era of information saturation has rendered everyone an expert, and unmitigated, subjective joy is too often read as naivety. It’s nearly impossible to mention a good movie or a great slice of pizza in conversation or on social media without being told about a better one, or why the one you just enjoyed was, in fact, not very good at all. Now trust, dear reader, I’m no Luddite — information and technology and progress are all wonderful things – you’ll find no longing for some non-existent ‘good old days’ here- and yet…

We are still human; we crave simple, joyful things. Thus, with all of the hand-wringing and focus-grouping over pace of play, length of games and declining fandom amongst the youths, may I offer this simple, foolproof solution: Bloopers.

Sports bloopers remain one of the pure joys in this world. Who amongst us didn’t grow up laughing our dirty, crumb-laden faces off to blooper reels — as rain delay theater, during in-stadium commercial breaks and in the final segment of pioneering highlight shows like This Week In Baseball and George Michael’s Sports Machine?

When so many of our celebrities, politicians and public figures are needlessly and undeservedly self-serious, what a delight to see the most physically gifted humans on earth stumble, bumble, and tumble in the silliest of ways. Bearing witness to a flustered and flailing demigod brings an unrivaled joy, and baseball bloopers in particular have a unique way of highlighting just how bizarre and arbitrary this game truly is. Will this save baseball? I don’t know that baseball needs saving. But made readily available by MLB on social media, during in-game breaks and delays, and as signature segments on their nightly shows, surely the generations that have birthed and institutionalized memes, vines, TikTok and cringe videos will have the same — if not greater — appreciation for the hilarious, quick-hitting, on-the-field folly compilations that those of us who came before them did.