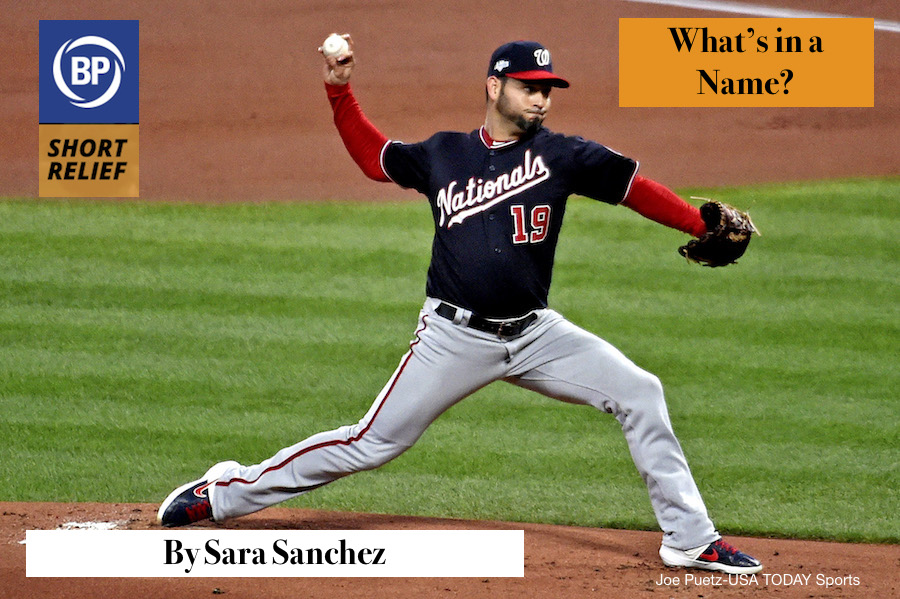 I taught high school for seven years, and the start of the year was always filled with a few key tasks to make sure we got off to a good start. You can probably guess a few of those priorities: arrange the room just so, lesson planning, and having clear class expectations available for students and parents. One element I took particular care with each year was learning my students’ names quickly and pronouncing them correctly. Learning the names of 120 new students in less than a week was one of the most challenging things I did each year. It was also one of the most important.

The research is unambiguous here: pronouncing students names correctly matters because taking the time to learn another’s name shows you value them and their identity. Names are often rooted in family history and culture — it’s critical that students see their teachers and peers affirming both. The research is also clear that mispronouncing student’s names can have lasting effects.

All of this came rushing back to me during Game 1 of the National League Championship Series as Nationals pitcher Aníbal Sánchez held the St. Louis Cardinals hitless for 7 ⅔ innings. It was riveting baseball watching the 35-year old veteran bewilder opposing hitters, it was also grating to hear my own name pronounced half a dozen different ways over the course of about two and a half hours.

I will be the first to admit that despite the best efforts of the announcers and the pronunciation guide MLB provides each year that this can be challenging. I introduce myself two different ways depending on the audience. If you listen to my podcast or just happen to meet me at some point, you’re likely to hear the anglicized version of my name, whereas if I’m in a room of predominantly Latinx people or at a family gathering you’ll detect a distinct accent. I’m sure it complicates matters for people who want to do a good job and respect the players.

But one thing I’m sure of is that it is not respectful to the players to slightly change the way a player’s name is pronounced every two minutes. As I was talking to a friend about this on Friday night, he introduced me to this absolutely on point Saturday Night Live skit highlighting the ridiculousness of the situation. I’m sure I wasn’t the only Sanchez listening who was both appreciative of the crew for trying, and a little bemused that a relatively common name in the United States was still so challenging to get right. 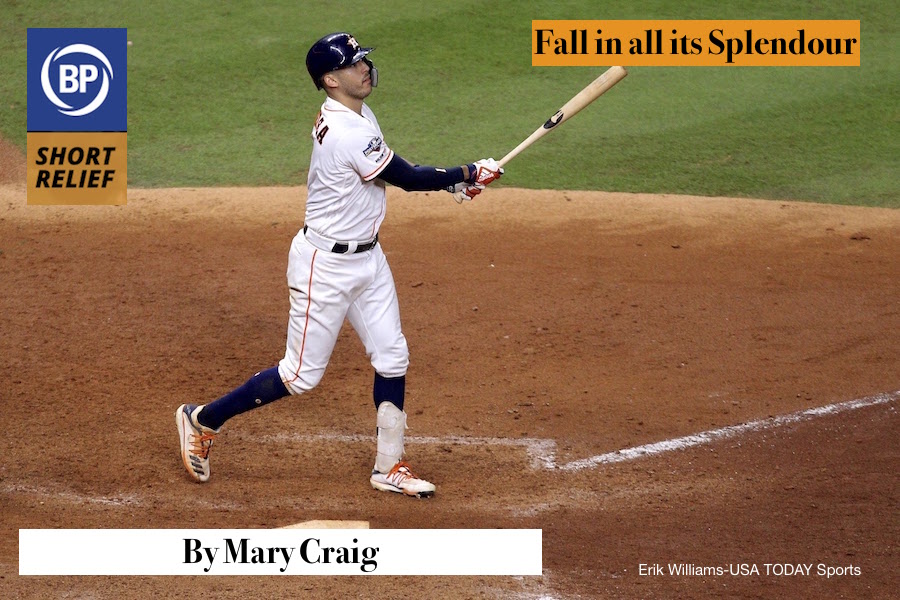 One of the biggest things I’ve missed since moving to Texas three years ago is a real fall. Here, the typical fall months are consumed by the dying embers of summer, forcing one to engage in typical fall practices while drenched in sweat. Rather than boast vibrant yellows, reds, and oranges, the foliage slips from green to brown overnight. The only indication that winter is approaching is the increasingly early sunsets, which create a new experience: that of going outside to find it dark at 5pm and yet still warm.

Not only is fall my favorite season because the weather is infinitely more agreeable than its preceding and succeeding seasons, it’s also integral to how I orient my life. Chilly mornings turned into bright, clear afternoons signifies the need to become studious in school, something I love so much I decided to make a career out of it. The dreary days on which handprints remain on window panes provide the perfect opportunity to curl up in a blanket and dive into a book. Each free weekend allows for meandering through an apple orchard and then returning home to bake every apple dessert known to humankind. Fall enhances all of my favorite things in every conceivable way.

Among these things is playoff baseball, of course. Although there is a certain charm to the spring and summer months of the sport, there’s absolutely nothing like baseball in October. It compresses the entire range of human emotion into roughly 31 days, deftly combining wonderment with devastation. It runs opposite in many ways to the preceding six months of the sport, but it also showcases the very best of baseball. It allows for some of the best in the game to enter into the territory of legends and provides the opportunity for fans to participate in myth building. It’s history and fiction and poetry woven together. It’s the final struggle for life before the emptiness of winter sets in. Its intensity in many ways is tied to the ever-shrinking window of true fall weather.

This past weekend, it felt like fall for the first time since I’ve been here. The air was cool, crisp, and had that distinct fall smell that I wish I could buy in bulk. Yesterday, in particular, was perfect: a rainy morning morphed into a gorgeous 60 degree afternoon. It’s like baseball knew about this miracle and rewarded Houston and beyond with the best game of the playoffs thus far, intense, skillful, and the perfect cap to the perfect fall day. 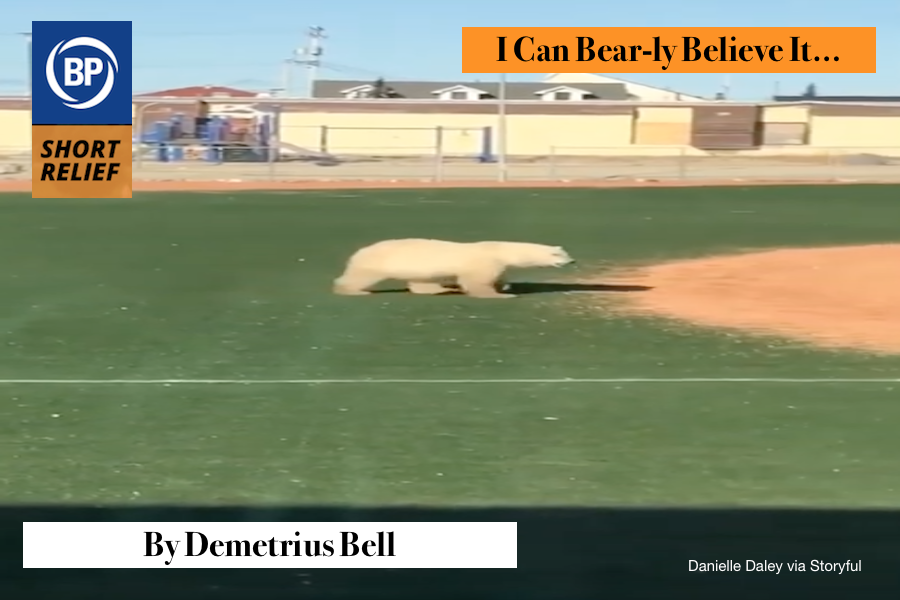 Seeing animals run across a baseball field (or any sports surface) is fun just for the sheer novelty of it. Isn’t it fun to see a bunch of adults halt the important business of Major League Baseball because a tiny little squirrel decided to invade the diamond? Cats may not be really popular when it comes to Chicago Cubs lore, but it’s always nice to see one of them running around and going crazy whenever they get the chance. They’re even letting dogs go retrieve the bats in some places across the minor leagues. It’s always fun to see the animals get involved and enjoy the fun that we seem to get from just being outdoors.

But I don’t think anybody could have anticipated that a polar bear would decide to claim a baseball field as her own.

Well, we have seen the likes of Pete Alonso and Evan Gattis roam across ballparks across North America, so maybe this Canadian polar bear was inspired by those two to give this baseball thing a try. There’s no word on whether or not the bear actually has a formidable swing like her two heroes, but she does have some defensive range and could be deployed in a utility role, displaying adaptability in multiple infield roles and the speed to play the outfield.

If the bear is going to continue on her baseball journey, it’ll likely come in a ballpark that is far from the human eye. As you’d expect, the locals in Churchill, Manitoba weren’t really all that enthused to see a polar bear trying to play a baseball game. CTV reported that the bear was eventually tranquilized and released back into her natural habitat. Maybe when she goes to the woods, she can work on her swing and figure out a way to hit for both power and contact. For now, she’ll just have to continue beefing up on her carnivorous diet and honing her craft before she returns to the bright lights of Manitoban baseball.

You need to be logged in to comment. Login or Subscribe
Llarry
I've been to Churchill, and walked right past that ballfield. The land belongs to the bears, the people are the ones from out of town.

Local rules (such as cars being left unlocked so anyone out can get in if a bear comes by) are designed to keep people safe, in order to keep the bears safe.
Reply to Llarry