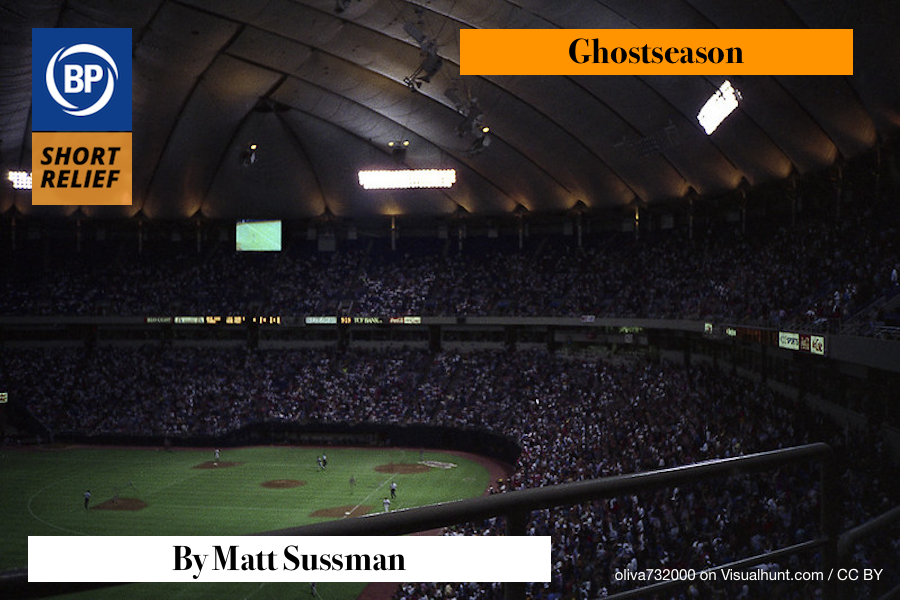 In 2017, the University of Central Florida football team went a perfect 12-0 but did not qualify for the NCAA playoff, then won their bowl game and claimed a national championship because exactly one computer algorithm rated them number one, while Alabama won an actual national championship.

You may have noticed this if you spent three seconds around Aaron Gleeman but the Minnesota Twins haven’t won a playoff game since 2004, a span which includes six postseason appearances and four division titles. They’ve lost their last 16 postseason games. Their last postseason win had Johan Santana pitch and Jacque Jones homer, and that’s some hefty Rememberin’.

Every time the Twins make the playoffs it’s a great story, and then they actually get into the playoffs and suddenly it’s fried ennui on a stick. This year, however, felt different. They weren’t plucky. In fact they were the standard-bearers of the dinger industrial complex by hitting a record 307 of them, winning 101 games and restoring hope and faith in a post-Mauer society. All that entitled them to was the honor of being the only divisional series team to not play a Game 5 or even a Game 4.

It’s possible the Twins will improve in 2020, even though a good chunk of their wins will come against the Royals, Tigers and White Sox, the sighumvirate of pro sports. Maybe they’ll crank even more home runs depending on which random number generator virus infects the baseball manufacturing machine. But there’s one way for them to further nullify the sour taste of having a dream season then facing the Yankees and getting predictably dismantled and repackaged back into IKEA boxes: pull a UCF and decline the postseason invitation. Can they do that? It might be in the rules, somewhere in the back. The AL Central is going on two years without a single postseason game win, dating back to the time the Cleveland baseballers were up 2-0 in the 2017 ALDS against, again, the Yankees.

I don’t know how to convey that winning over 100 games in a season is a super hard and cool thing to do in the major leagues, an accomplishment of distinguishment, and worth riding into the sunset. I recommend all future AL Central division winners do this, at least until the Tigers are projected to face the Yankees, for certain reasons. 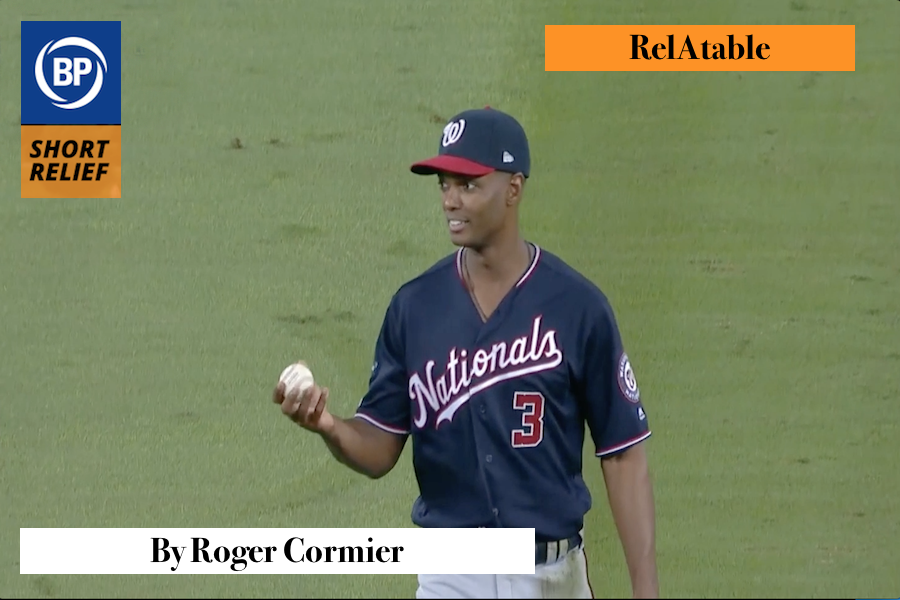 The Washington Nationals won a playoff series. In 1981. They lived in a different country and called themselves large exhibitions(?), but technically they did the thing.

Technically schmecally. The Nationals Have Never Won a Playoff Series narrative/meme/go-to mantra for the meditation retreat was bigger than you and me and everyone in between from 2012 until Wednesday evening at Chavez Ravine. The 2010s unofficially ended when Justin Turner’s shallow fly ball destined to meet some grass landed in a Washington player’s glove instead.

I did not know how I would feel when the Nationals would eventually win a series dressed like the Walgreens softball team. While I never participated in sarcastic cries of #Natitude, or exchanged favorite quotes from the infamous Jason Marquis could have gone anyyyyyywheree commercial, I didn’t exactly mute any tweets of such material neither. Death, taxes, and the Nationals not playing deep into October. It’s good to have stuff you could set your watch to! Keeps you grounded!

That’s total nonsense of course, as I discovered watching Michael A. Taylor’s reaction to catching the final out.

Taylor looked like Dustin Hoffman and Katharine Ross on the bus after they caught their breath. He looked like me mentally traveling to my Good Place on Thanksgiving when politics come up. He looked like I imagine any of us would if we were a baseball player who won a playoff series for the first time in the majors — if any lifelong dream of ours came true (aw). There would be five seconds of utter shock and disbelief, a smirk across the face when the brain remembers previous athletes looking happy in this very situation. It would be an inadvertent example of truly living in the moment for the first time in our waking existences.

And then it would hit us. 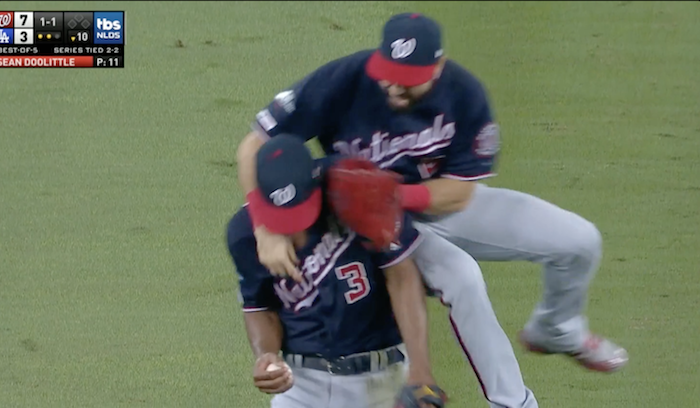 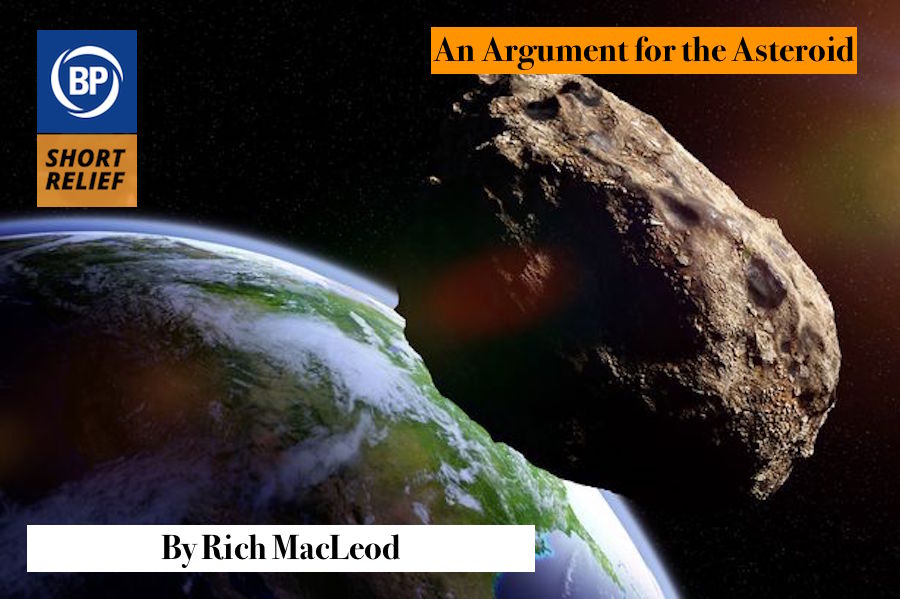 Right as we speak — as you sit there bundled up in your fall attire reading this on the subway, in your living room, or perhaps in bed with your phone hovering directly above your face — a cluster of four asteroids is soaring through the cosmos at speeds reaching over 30,000 miles per hour, and it’s headed towards Earth.

Now before you start to get those nervous sweats that you tend to get, NASA has already stated that none of these inanimate planet-killers from outer space are projected to hit the planet, thus creating grande worldwide devastation ending life as we know it.

But — and bear with me here — is that what we really want?

If you’re a fan of the Atlanta Braves, New York Mets, or perhaps one of those other two teams in the National League East, you may actually want to consider all possibilities here. And ultimately, there are truly only two choices: planetary annihilation, or a Nationals-Cardinals NLCS.

World-ending asteroid isn’t sounding so bad now, is it?

In the Cardinals case, they have knocked Atlanta, the Mets, and the Phillies out of the postseason within the last decade, and the Nationals are a division rival that nobody wants to see hoisting a National League pennant or, God forbid, a World Series trophy later this month. How is one supposed to pick a “lesser of the two evils” when both parties are equally malevolent? In cases like this, sports fans often say they’d rather “root for the asteroid.” This may actually be the first time in baseball history, though, where the asteroid is no longer metaphorical. There is not one but four near-Earth objects (NEOs) headed our way right now, the closest of which will zip within a projected 538,162 kilometres this weekend.

So would it really be so terrible if another rogue asteroid or Galactus or some other space entity just nudged one of these bad boys to a direct collision-course with Earth? And hey, at least you’d be able to say “I was there for the end of the world.”

Better that than the alternative, at least. I rest my case. 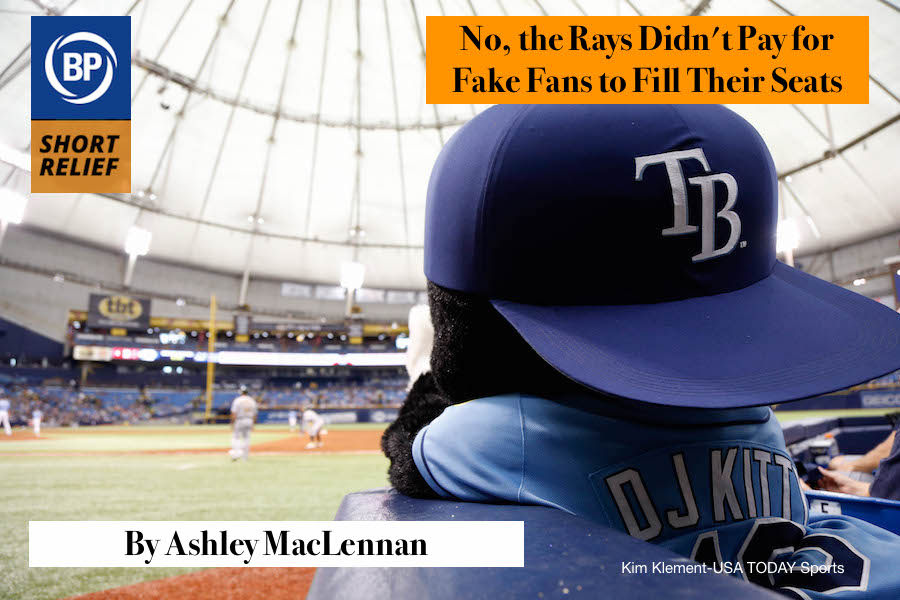 Who doesn’t love a good conspiracy theory? The ones that are completely absurd, but the more you think about it you just have to wonder “Is it so crazy that…it might be true?”
During Game Four of the ALDS series between the Tampa Bay Rays and the Houston Astros the other night, a few folks on Twitter took note of the large crowds in St. Petersburg, Fla. and wondered: “Do the Rays really have this many fans?”

The conspiracy continued to grow as former New York Mets GM Steve Phillips posted a now-deleted tweet that accused the Rays of this: 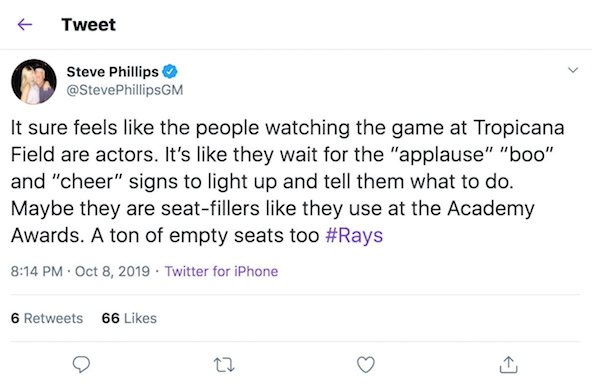 Baseball has had some interesting conspiracy theories in its past, most recently with a great debate over the ball being used in the postseason leading to fewer home runs. But without a doubt the greatest and most absurd I’ve ever heard is the idea that a professional baseball club, on the verge of advancing to the ALCS for the first time since 2008, would have to pay fake fans to fill the seats.

It’s worth noting, too, as the camera panned around Tropicana Field, there were plenty of non-Rays fans in attendance, not just there to support the Astros, but sporting Yankees and Red Sox gear as well. There are a lot of transplants in the Tampa Bay area, and Central Florida on the whole, which means in the regular season, fans of the Red Sox and Yankees show up in droves, drowning out local Tampa Bay supporters at games.

The Rays are also often the butt of attendance jokes all season long, as they rank 29th in attendance, just above the Miami Marlins, for regular season attendance numbers. Their television viewership however, is impressive, meaning there are plenty of fans watching, just not always at the stadium.

A lot of that has to do with the location of Tropicana Field in St. Petersburg, making it a long drive for those coming from actual Tampa Bay, and especially difficult for those limited to public transportation. But the things that hold fans back in the regular season don’t appear to be limiting them in the postseason, and the availability of tickets as low as $20 to see playoff ball can’t hurt either.

The Rays did not comment on Phillips’ tweet, but were more than happy to share the impressive number of fans that attended the games. They came out in droves to support their team, chanting a “Ji-Man Choi” chorus, and holding prescient “Houston, You Have a Problem” signs, and filling 64,429 seats happily over two days.

At their own expense.