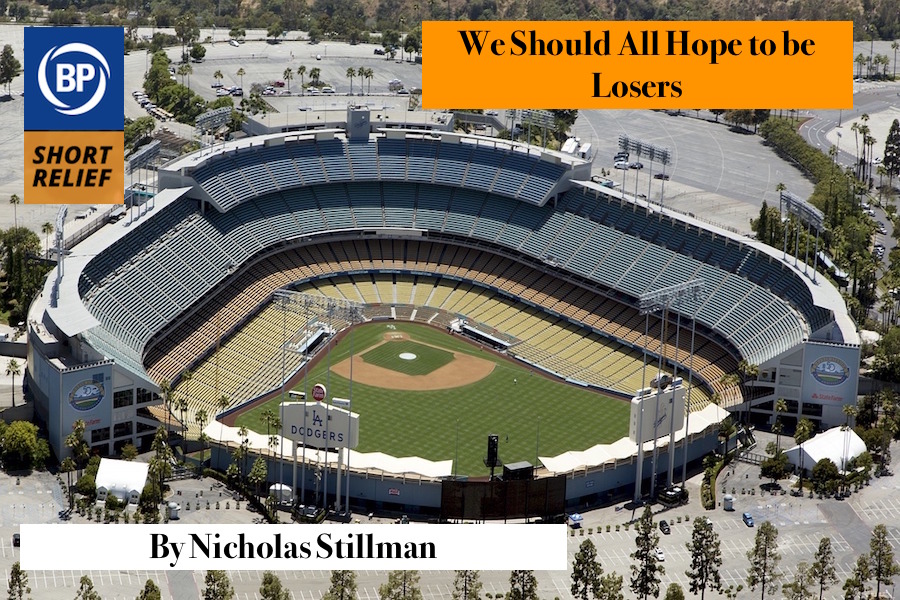 My friend is a Dodgers fan; I am a Mariners fan. Our October baseball experiences have been, shall we say, different. Recently, before the Dodgers’ first playoff game of the year, we sat down for dinner and talked about her team. The conversation was pleasant and predictable until I asked her if she had bought tickets yet for the divisional playoff series.

“Nah,” she shrugged between bites. “I’ll just buy them for the Championship Series. Or World Series, if I can afford it.”

“What?” I coughed, choking on a bit of shrimp. I sipped water while searching the emptying restaurant for someone who would share my incredulity. I mean, what if they don’t make it that far? You can’t just wait.”

She tilted her head, half smiling as I’d once seen my mother smile when she’d found me in the backyard, my head caught between the forking branches of our cherry tree. “I mean if they don’t at least make it to the Championship Series, then it doesn’t matter anyway.” Perhaps sensing she had crossed into dangerous territory, she added. “It’s just different. At this point I’ve already been to, what, 15 playoff games? Winning the World Series is all that matters.”

I nodded in thought. I laid my burrito into its basket, wiped my lips with a napkin, and excused myself. I ambled to the salsa bar where I consulted the placards. I selected the orange habanero salsa, which appeared to me the hottest. I opened my eyes as wide as I could and submerged the entirety of my face into the metal bucket. I held myself under the peppered liquid, eyes open, until the pain became intense enough I could no longer remember our conversation. It took some time.

On the drive home, having cooled, I revisited our oppositional baseball experiences. If my famously inept team where to make the playoffs, the lengths to which I would go to attend a game would likely result in my arrest or, at least, a public shaming. And yet here was a baseball fan, one every bit as dedicated and loony about her team as I, treating a playoff series with the same frustrated indifference one treats an unskippable Youtube ad.

Was this it? Was this what I was chasing? Is that where our wildest fantasies arrive: condescension over shrimp burritos? I wondered what that level of sustained success would do to my fandom. Winning would be easier to stomach, of course — but if they always won? If I expected, nay, required them to advance in the playoffs in order to feel? How much different is that, really, from the numbed excitement and shallow hope I experience every July after a four-game winning streak? Are the actual emotional experiences so different? And if not, what is this all for?

I write this on Tuesday the 8th, on the eve of the deciding Game 5 between the Dodgers and Nationals. I feel something I did not expect: pity. How hard it must be to live with the threshold of joy raised so high, the chasm of disappointment so vast and accessible. If they lose, my friend would experience devastation and disappointment. If they win? Relief and perhaps muted irritation for the proximity to elimination. How lucky to be in a position to consider reaching October 9th a failure. Yet how tragic, too. Maybe it’s best if they lose. To experience some failure and reset the scales. But I have no way of knowing.

Today I asked my friend today whether or not she had bought those tickets after all. I have yet to hear back. 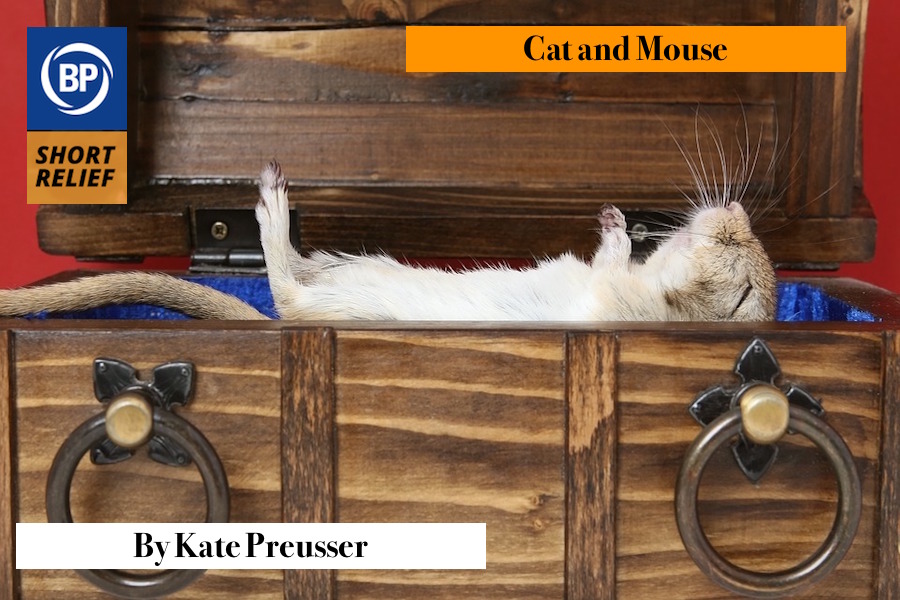 Taking out the garbage the other night, I swung open the front door to find a dead mouse, perfectly positioned in the middle of the mat, gray as an October storm, small body a fortune-cookie crescent — an offering from my cat, who insists on leaving such tokens despite being granted no positive reinforcement for this behavior other than continued food and shelter. Nor can I discipline him for this action, the natural course of things: the cat mouses, the mouse is catted. On the TV just inside the Yankees stood poised to bounce the Twins from the playoffs for the sixth time in recent memory, a different version of cat-and-mouse.

Usually the phrase “cat and mouse” is meant to evoke an image of a game of strategy, one chasing, one evading; the sheriff and the bandit, the jewel thief and the detective, the government agent and the spy. There’s often a power imbalance, but the lawman’s resources are counterbalanced by the outlaw’s cunning, recklessness, savagery, their ability to play the game outside the rules. The game is afoot, exclaims Sherlock Holmes, and it is a game between Holmes’s bloodless logic parrying Moriarty’s dramatic flair, Eve’s steely-eyed resolve vs. Villanelle’s unhinged obsession, the goofy naivete of the Duke brothers vs. power-hungry politico and likely Yankees season ticket holder Boss Hogg. The dramatic universe provides enough engineered counterweights to make it seem like at any time either side could win, even if the audience knows who the eventual victor will be.

Baseball attempts to do the same, with a playoff system meant to reward the best teams, but also allowing for the plucky underdogs with smaller payrolls or smaller markets or a franchise less steeped in history. Aside from the high-stakes drama of the Wild Card play-in game, the five-game series of the divisional series also somewhat evens the playing field for the less-favored team; baseball is weird, and in smaller sample sizes weird things can happen. Unfortunately, when the weird isn’t happening, what that can look like is what played out in the ALDS, leading to the Yankees revving up their Bronxcopters and salting Target Field for a sweep of the long-suffering Twins. The Twins were outscored 23-7 in the series.

As a lifelong cat owner including some world-champion mousers, I can tell you that real life cat and mouse games are less glamour, more Hobbes: nasty, brutish, short. The cat acquires its target, waits, pounces, and captures. If it’s a game, it’s a blitzkrieg chess opening; it’s the Yankees running roughshod over the Twins. It’s not exciting. Sometimes you’re the windshield, sometimes you’re the bug, but somehow the Yankees are always the cat. 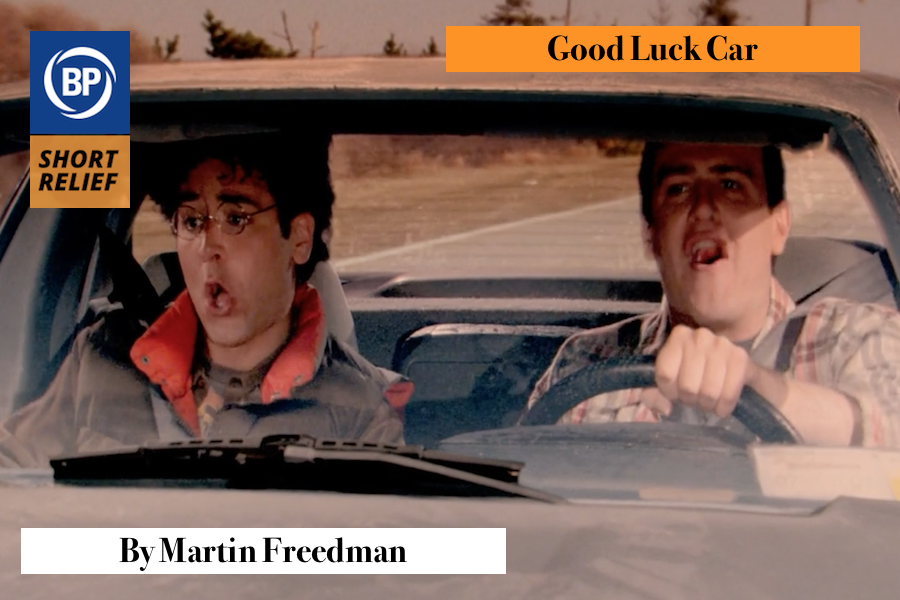 Our memories have a funny way of linking things together. Two events happened in my personal universe on June 30, 2000. The Mets scored ten runs in the bottom of the eighth inning to erase an 8-1 deficit and stun Atlanta, and my parents bought a new car, which has since been passed on to me. That same car, now old enough to vote, almost broke down for good a few weeks ago, which would have been a shame. I like associating it with that night.

What I remember most about the ten-run inning is that my parents were outside talking to our neighbors, possibly about the new car, while I was inside watching the game. I don’t know what my parents and neighbors were talking about, but I got the understandable “let me know if anything big happens” response every time I told them about the barrage of walks that brought the Mets to within two runs.

Then Edgardo Alfonzo singled to tie it, and that announcement got Dad’s attention. He put the conversation on hold to come inside, but while he was doing that Mike Piazza had hit the laser to end all lasers. By the time my father got in sight of the screen, Piazza was rounding the bases, the Mets were on their way to victory, and I imagine I was screaming my head off.

When the mechanics told me what needed to be fixed in my car (thankfully it wasn’t anything expensive), I thought about that game again. I’ll get to keep doing that as long as that little red Camry holds together. Maybe after it finally goes down for good I’ll seek out a full video of the game to immerse myself in some nostalgia.

I wonder if someone in Atlanta bought a car on that night and their child experienced the opposite swing of emotions as their parents talked to some neighbors. Statistically speaking, it’s not impossible, right? I think I’d like there to be a Bizarro Me somewhere in Georgia, driving a dented blue Honda around and occasionally grumbling about Kerry Lightenberg and Terry Mulholland. “Just throw a strike, Kerry,” they’d say as the mechanics replaced the brake pads. “Throw a strike.”