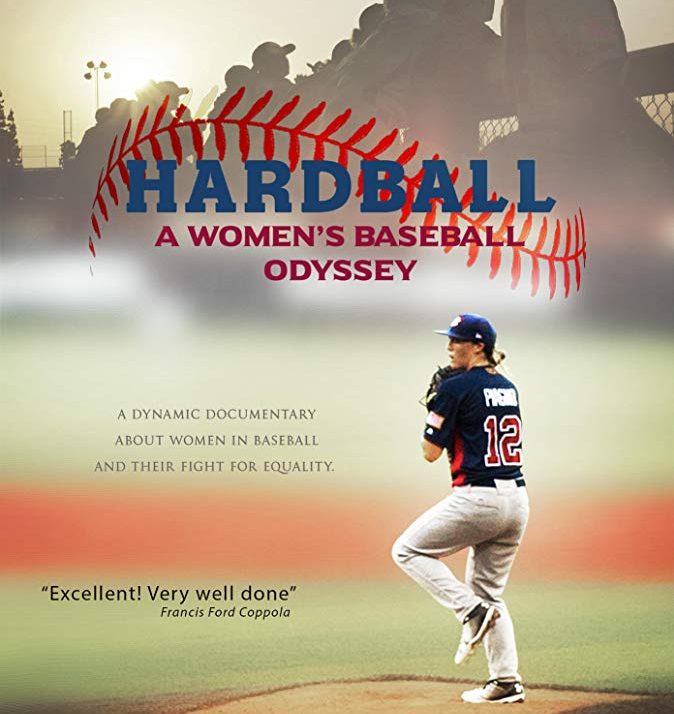 “Hardball: The Girls of Summer” is a love letter to women’s baseball. It’s also an educational and compelling look at the state of the game in the late 2010s. For those who follow women’s baseball closely, there is enough original material for the film to remain engaging even as it traces familiar paths; for those new to the game, the film provides sufficient background, explanation, and history to make it clear that this is a fully realized world that deserves just as much respect and interest as the men’s version of the sport.

The documentary, directed by Matthew Temple and produced by Jewel Greenberg, was released online September 24th and premiered at the Women Sports Film Festival in San Francisco on September 27th. With Jessica Mendoza’s expert narration, the film introduces its main players: four of the players on the 2016 US Women’s National Team as they journey to the Women’s Baseball World Cup in South Korea. They are 1B Malaika Underwood, OF Tamara Holmes, RHP Stacy Piagno, and RHP/OF Kelsie Whitmore. Though other players are interviewed as well, the filmmakers make the strong choice to focus on these four, who have had different paths to the sport but have all represented Team USA multiple times.

We hear plenty from them about their backgrounds, including Underwood’s oft-repeated story about how she wrote to all the different high school coaches in her region, choosing where she would attend based on which of them would give her a fair chance even at a tryout. Whitmore and her father joke about how she only wanted to play ball if she didn’t have to put her hair up. (She pitches with her hair loose to this day, with flow that would put Noah Syndergaard to shame.) There are less amusing stories as well, as all of them mention how they were at times targeted by other boys, coaches, and families for being girls. Underwood’s mother recalls not being able to stomach attending her high school games after a particularly nasty incident where she was kneed in the head while making a play at second base. Various male coaches are interviewed as well, most of whom show genuine respect for the women as players, though with a recurring theme: joking comments about how they wish their male players had the work ethic that the women have. It’s the kind of bittersweet compliment women in baseball are surely used to: they have to work this much harder for exponentially fewer opportunities.

Other figures in and around the game appear in the film to provide cultural and historical context, including trailblazers like Ila Borders (the first female pitcher to start a men’s professional game in the post-racial integration era), coach-organizers like Dr. Justine Siegal (founder of Baseball for All and the first woman to coach for an MLB organization), and Dr. Jennifer Ring (women’s baseball historian). They discuss the decades’ worth of women’s baseball in the US, including Jackie Mitchell striking out Babe Ruth, the All-American Girls’ Professional Baseball League, the Maria Pepe lawsuit against Little League, and barnstorming women’s teams like the Silver Bullets. It’s a fascinating history, but with one notable omission: though a photo of Toni Stone appears in a visual timeline onscreen, none of them explicitly mention Stone or either of her compatriots, Mamie “Peanut” Johnson or Connie Morgan, who were the three women to play professionally in the Negro Leagues. In a documentary that includes appearances by Sharon Robinson, who compares the women’s struggles to those of her father, the glossing over of the Negro Leagues’ female players is a surprising snub.

Regardless, their point is clear: girls and women have been playing baseball for as long as the game has existed. They have been playing it well. And yet, the American public remains convinced that women’s baseball doesn’t exist. Even some of the players themselves recall not knowing that there was a US women’s national baseball team until they were already well-established in the sport in other ways. And every time a female player succeeds, the media treats her as an anomaly, a gimmick, a diamond in the rough. There are thousands of girls playing baseball across the US, but as Underwood puts it, “Every time we play in the World Cup, it’s like, oh, women play baseball? And then two years later, people forget that somebody already wrote that article.”

As the World Cup approaches, the film starts to look more like any other sports documentary: there are training montages, dramatic music plays, ponytails whip around in the wind. But spliced in with the footage from the field is a behind-the-scenes look at the team and how they truly seem to mesh with one another. It’s the kind of footage we frequently get in men’s baseball these days, the kind of footage that fans love but is rarely emphasized in women’s sports, where the drive to be taken seriously must reign supreme. The players sing karaoke in the locker room. They dance on the concourse. They make faces at each other on the plane. They play hacky sack. They flex their biceps and make fun of each other’s windups. Whitmore says in one interview how much less pressure she feels when she gets to play baseball with other women, rather than always having to prove her right to be there at all. That feeling comes through on camera: the joy emanating through the team as they prepare for the tournament is palpable. This sequence, of clubhouse shenanigans combined with shots of smooth plays on the field, was the part of the film I found the most fun to watch.

Unfortunately, the 2016 World Cup did not go as planned for the US, and the mood shifts accordingly. In the meantime, the event provides the filmmakers the opportunity to sit down with a variety of international figures in women’s baseball. Highlights include interviews with Okura Koichi, manager of the Japanese team, whose goal is to establish girls’ baseball in every high school in Japan, and Marriam Shafiq, RHP and team captain for Pakistan, who talks about the obstacles that she and her teammates face with simple independence in their home country. Coaches and players from India, Venezuela, Australia, and Canada are interviewed as well, though, frustratingly, not all of their names appear on-screen as they speak to the camera. But it’s Syed Shah, manager for Team Pakistan, who breaks down the toughest facts to hear: if baseball is America’s national pastime, but the US women’s team is facing other countries and losing, “you should work on that.”

In spite of the outcome of the tournament, one of the most touching moments of the film comes after the medals have been handed out. Tamara Holmes, who is retiring from the sport, receives a congratulatory card from Team Japan, and after they exchange mutual words of respect, the Japanese players lift her up on their shoulders and cheer for her. Though the US team would give their eyeteeth to beat Japan, and the Japanese players joke about their relief in not having to face Holmes on the field any more, these women clearly recognize the way the game connects them across borders and even bitter rivalries.

The filmmakers set out to make a documentary about Team USA in the World Cup, and the team’s loss prevented them from getting the photo finish they must have been hoping for. Instead, the end of the film focuses on the inaugural Trailblazer Series, a national girls’ tournament sponsored by MLB. Many of the national team players came back together as coaches for that tournament, which has since become an annual event. It’s a fitting note to end on, and an uplifting one. The inaugural tournament’s players were honored on the field at Dodger Stadium as part of Jackie Robinson Day. But although the faces of the players and coaches shown on-screen were as racially diverse as could be, I was left wondering what these girls’ baseball trailblazers are doing to ensure that the girls’ game, as it becomes more competitive across the US, doesn’t follow suit with the boys’ version in becoming less and less accessible to low-income and African-American kids. Two other girls’ tournaments, co-sponsored by MLB and USA Baseball, have joined the Trailblazer Series in the past several years, and MLB’s RBI (Reviving Baseball in Inner Cities) program has incorporated its first girls’ team, the San Francisco Bay Sox. The game is growing. But access to baseball for girls needs to mean access for all girls, or it’s only a shift from one type of exclusion to another.

Without the hoped-for World Cup win, what is the ultimate goal of “Hardball”? To depict a moment, a tournament, a point in time in women’s baseball? To educate more people about the women’s game? To give us all more opportunities to watch women ballplayers hit dingers? (Yes, please.) These are lofty goals in just 74 minutes, and though the film flows well and ends neatly, it left me with the feeling that it was over too soon. But maybe that is the goal: to show just enough of the glory that is women’s baseball to make you want to get up, find it, play it, watch it, demand that it be broadcast nationally, organize it for your children. We all know that baseball is the greatest game in the world. The girls of summer deserve to be able to play with all the respect and opportunity afforded to the boys. It’s way past time.

“Hardball: The Girls of Summer” is available on iTunes, Amazon, Google Play, and other digital platforms. For more information, visit hardballfilm.com.