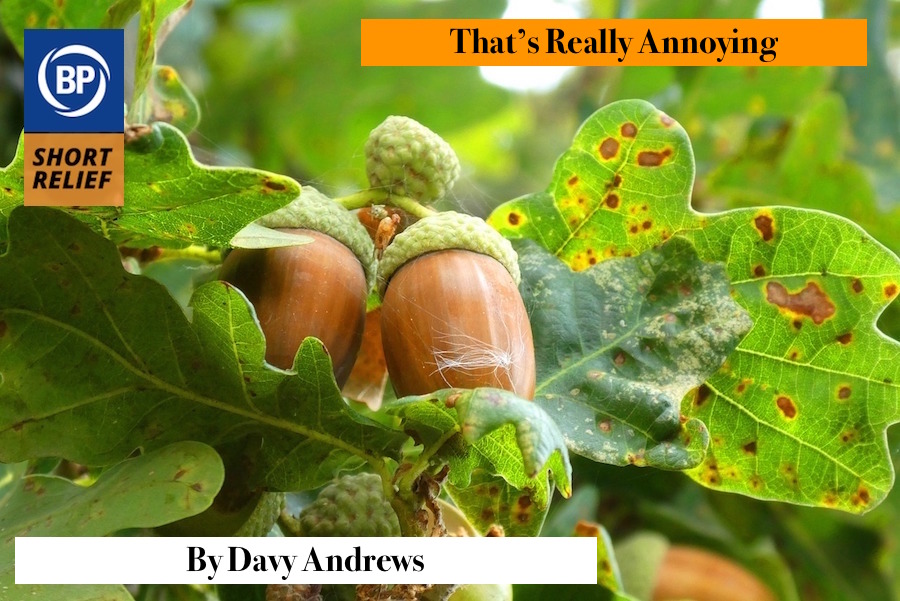 So I’m hanging out with my niece, Anna. She’s two years old and fun and cherubic, and she is struggling with something, I can’t remember what. She’s getting frustrated as she fumbles with it and all of a sudden, her eyes still narrowed and her tiny hands still working, she says with perfect diction in this extremely grown-up, detached voice, “That’s really annoying.” It was kind of like watching a squirrel struggling with a particularly tough acorn only to stop, smack its paw against its forehead, and pull a hammer out of its pocket to smash it.

Like many parents, my sister avoided using certain words around her kids, especially the word hate. She was in no rush to introduce the concept of hatred to her children. It would find them, as it finds all of us, soon enough. “That’s really annoying,” became her circumlocution of choice, so naturally her kids learned to say that one sentence, with her exact tone and facial expression, long before they discovered the wide world of non-disposable underwear.

“Love is slow and accumulating,” Wendell Berry wrote. “But hate comes off in slices, clear and whole—self-explanatory, you might say.” That’s certainly true for baseball fans. New hatreds come off all too easily: division rivals, teams that eliminated yours in Octobers past, the team that torpedoed your season by injuring your MVP, teams that treat domestic abuse as a market inefficiency, the team whose hat that one jerky guy in high school wore every single day.

(Ok, let’s get specific on that last one: It’s the Red Sox. I’m pretty sure no matter where you grew up that jerky guy in high school was wearing a Red Sox hat. If there is life under the icy crust of Enceladus, the bullies there are probably swimming around with Red Sox hats on all six of their jerky alien heads.)

My hatred for the Dodgers came off, clear and whole, during game five of the NLDS in 2016. I was, believe it or not, struggling with acorns at the time. Acorns contain bitter tannins in quantities that make humans sick, but you can bake with them if you leach the tannins out in boiling water. I like to bake and it seemed like a fun challenge. At this point I should probably mention that I am not a lunatic. This is actually a thing. I read once about tribes warring over territories with especially fruitful oak trees. Swear to God.

I gathered some acorns, as you do, and during warmups I shelled them (read: smashed them with a hammer) and set two pots on the stove. When the water turns brown, you strain the acorns, switch to the pot of fresh water, and repeat. Once the water stops turning brown, they are ready to be dried and roasted or ground into flour. No longer bitter, they apparently taste rich and nutty. I’m not insane.

Game Five was the longest nine-inning game in playoff history, and I boiled those goddamned acorns the entire time. Max Scherzer held the Dodgers scoreless through six. I boiled and switched. The Nationals bullpen — you won’t believe this — did not pitch very well. I boiled and switched. The windows in my tiny apartment fogged up from the steam. It was the least sexy reason for fogged up windows in human history. Clayton Kershaw jogged in to induce a Daniel Murphy pop fly for the second out in the ninth, and Wilmer Difo’s fatal, flailing strikeout was a formality. The water never stopped turning brown.

It was nearly one in the morning and finally I tasted one of the acorns. Still bitter. 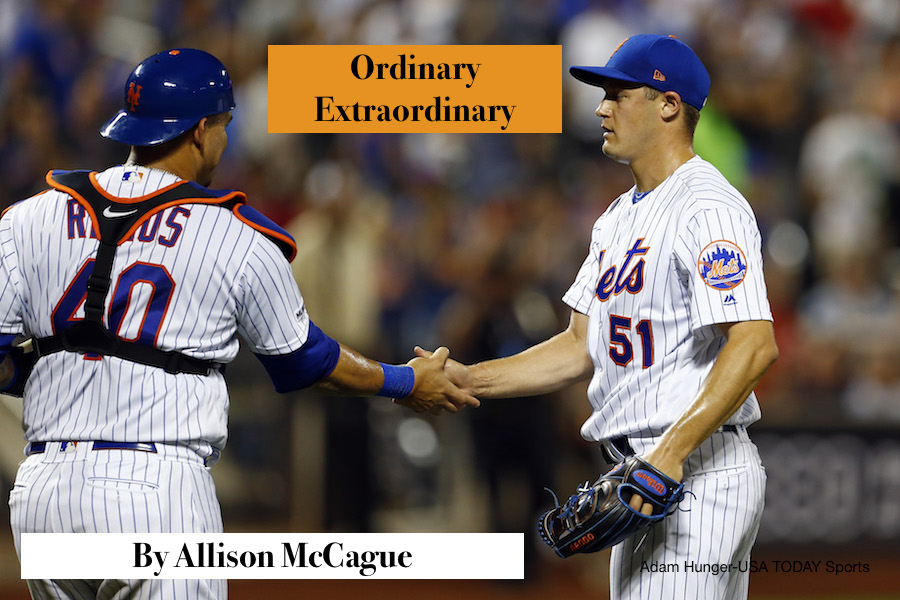 The last week of baseball season brought a flurry of storylines to follow — playoff hopes realized and dashed, final farewells, and quests for individual awards and record-breaking achievements. The dominant storyline for the Mets was Pete Alonso snapping the rookie home run record. Jacob deGrom finishing off his likely second consecutive Cy Young season was another notable one.

But something else happened during the Mets’ final week that went virtually unnoticed. Paul Sewald earned his first major league win. “Who is Paul Sewald?” you may ask. And I wouldn’t blame you for asking. If you looked up “Quadruple-A reliever” in the baseball dictionary, you would probably find Paul Sewald’s picture there. His story is much the same as many players like him. He’s spent the past few seasons shuttled back and forth between Triple-A and the majors, posting pedestrian numbers along the way.

Of course, deGrom himself has done a lot to demonstrate the uselessness of the pitcher win as an actual barometer of performance. And so much has been written about deGrom’s inability to buy a win, no matter how elite his performance, due to a witch’s brew of lack of run support, poor defense behind him, and sheer bad luck. This misfortune has stolen all the headlines from Sewald, who I can only imagine sitting on the sidelines saying to himself, “You think you’re unlucky?” It’s kind of like watching the valedictorian of your class lament their rejection from Harvard as you fight to get accepted at any school at all.

When one really considers Sewald’s infamous streak for a moment, it is truly incredible. Because accumulating such a streak requires the perfect storm, the truest essence of what a Quadruple-A reliever is. It requires the pitcher to be unheralded enough to not be given high leverage innings often, to perform poorly enough to not win any games, but also to be good enough to keep getting chances at the major league level.

Through being completely and utterly ordinary, Paul Sewald achieved something extraordinary. And for that, I raise my glass to him today. Because for every Jacob deGrom and Pete Alonso, there are also many Paul Sewalds, quietly producing statistical oddities like this that tickle my fancy as a baseball fan. Congratulations for getting that monkey off your back, Paul. I’m happy for you. 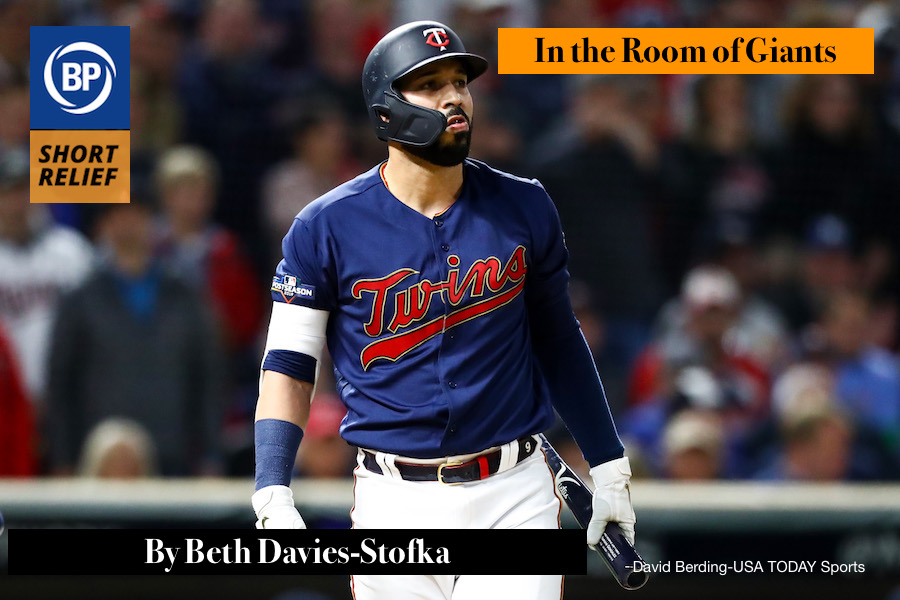 The following is a re-examination of a dream on the eve of summer.

This past offseason, I had a dream about Marwin González. I was an adopted member of his family. I was extremely close to his mother and aunt, who treated me like a third sister. We walked arm-in-arm while Marwin and his wife tended to the children with great sensitivity and tenderness. We were a family of very tiny people, only a few inches tall, and we were on a long and dangerous trek across the floor of a dining room — the dining room of giants. Marwin’s father led the way, holding before him a radiant pendant at the end of a short chain. When we saw an answering light from the other side, we crossed under the table to safety.

During the season, I needed an American League team to attach myself to, so I picked the Twins. It was a great choice. My dream left me feeling euphoric, and the Twins did the same. Not only that, but for awhile, González was hitting pretty well. I still feel good about him, as if I have residual, albeit completely imaginary, family pride.

In 2007, I dreamed that I fell down an elevator shaft. I would have died except that Manny Ramirez dove in and saved me. That year I rooted for the Red Sox, and it was a very happy season indeed. Boston cruised through the World Series to an easy and predictable win. So as the 2019 season started, I indulged a silly question. Can I dream a team to a World Series victory?

I don’t know. How do I, a sensible and modern woman, rule it out? I don’t even know why I dream to begin with. The brain does its own thing, haunting me without my permission. So…what if? What if, just like the Red Sox in 2007, the Twins had gone all the way? Would it have been because I dreamed of Marwin González, and our pack of tiny, intrepid travelers?

It was such a sweet dream that the Twins were my AL team of choice in 2019. It brought me six months of happiness, and that’s what I’ll remember. Not even Didi Gregorius can rob me of that.