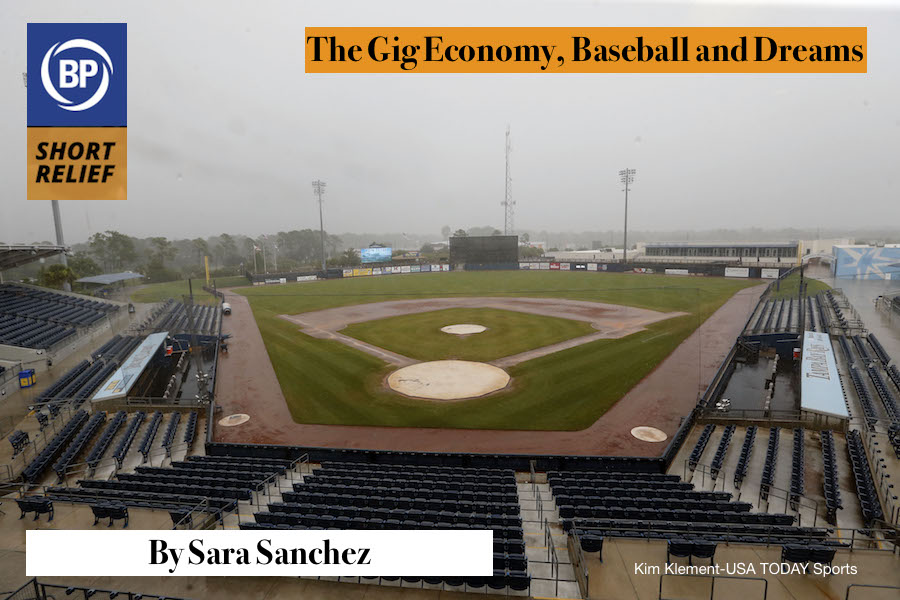 When I was a kid we called them side jobs. I remember heading out with my mom and my brother to bring my dad a sandwich and a Big Gulp of Dr. Pepper at one of his various side jobs: a masonry project in town. It was a way for him to bring in some extra money when the mines were struggling.

As an adult my side job is quite different than the masonry projects my dad did for years. I work a regular nine to five as the national program manager for an education nonprofit, but almost every day I devote some time to writing or podcasting about baseball. I’m lucky that somewhere along the line a couple of editors liked those words enough to give them a platform, allowing me to chase a lifelong dream of writing with some compensation for that time.

The gig economy is fueled by hopes and dreams.

The stories trickle out every season from every corner of baseball. Players who can’t make rent on the salaries they are paid in the minor leagues, teams soliciting local families for players to room with during the season, spring training gear drives for minor league players who are just trying to make it for one more year in the hopes that this year they will get their shot at a major league team. When major league players rehab in the minors it’s common for them to spring for a nice meal for their teammates – because odds are they’ve been persisting on peanut butter and jelly sandwiches. The vast majority of minor league players you see didn’t get the large signing bonuses that are reserved for early round draft picks — they make almost nothing and struggle to get by on it. They work multiple jobs in the offseason to fund their dream for one more year, many of them showing up at Spring Training for no compensation on the off chance this might be their break.

Math is unforgiving, so the vast majority of players never get their break. Randy Dobnak is the exception to that rule, which is why it was particularly cruel to hear the fans at Yankee stadium mock him by chanting “Uber” as the Twins rookie made his playoff debut in the Bronx. Dobnak seemed to take it in stride, but as a person with dreams tied up in the gig economy I found myself left wondering. I wondered how many of those fans got to the stadium in an Uber or Lyft, and what dreams they helped fund with that ride. I wondered how many worked some sort of similar job in the gig economy in order to help pay for their tickets that night, or fund some other dream of their own. 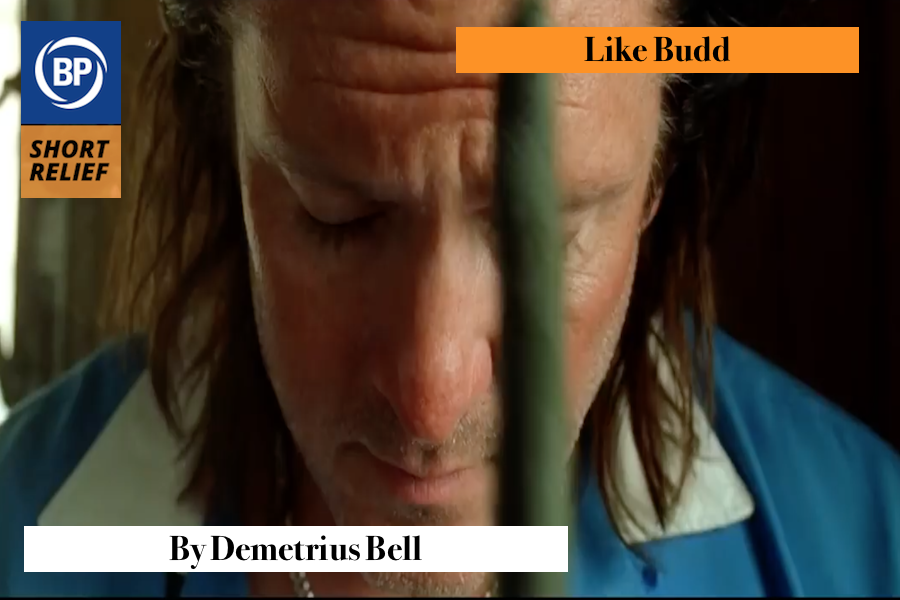 There’s a scene in Kill Bill Vol. 2 that sums up how I feel about the playoffs at this particular point in time. The titular Bill shows up to his brother Budd’s trailer home and warns his brother that the Bride is coming for her revenge after being left for dead following the betrayal of her former assassin gang. As it turns out, Budd already knows that she’s coming, and the battle-weary assassin himself welcomes whatever fate holds for him in the future.

Budd’s actually kind of chill about the whole thing. He’s accepted that he’s done wrong in the past and that whatever happens to him, he’s probably got it coming. He tells Bill as much, saying “That woman deserves her revenge, and we deserve to die.” He also mentions that she deserves to die as well, hinting that he’s not going to go down without a fight. He ends this with a “we’ll just see” regarding what happens, once all of their reckoning eventually comes about.

This scene is how I feel about what’s going to go down on Wednesday in the National League playoffs. It’s particularly how I feel about the Atlanta Braves and the Washington Nationals. The Nats have never won a playoff series. They have advanced in the postseason (which they did last week), and that’s the only technicality that keeps them from completely getting off the mark when it comes to the playoffs. If you somehow didn’t know this before, then you would have been reminded by countless other baseball fans — particularly fans of the Braves.

This is despite the fact that the Braves have not won a playoff series of their own since 2001. I was rushing home from middle school to watch Dragon Ball Z the last time the Braves made it past the first round. I can at least remember seeing my favorite team celebrate a playoff series win, but the memory is becoming murkier and murkier with each passing day. Yet here we are, making fun of the Nationals for not doing something that has tormented the Braves since Total Request Live was in its prime.

Both teams have their day of reckoning coming on Wednesday. The Nationals and Braves are both one win away from ending their droughts, and yet I’m sitting here preparing for the  worst. I feel like Budd. I feel bad for the Nats fans who’ve had to deal with that from Braves fans when we’re the ones leaning onto past glory. The Nats are the Bride, and they deserve their revenge. They also deserve to go down too, since I still want to see the Braves advance and maybe even take them out in the NLCS if that’s what it comes down to. If the Braves don’t make it and the Nats do, I’m going to my nearest pawn shop and selling them a priceless Hattori Hanzō sword. 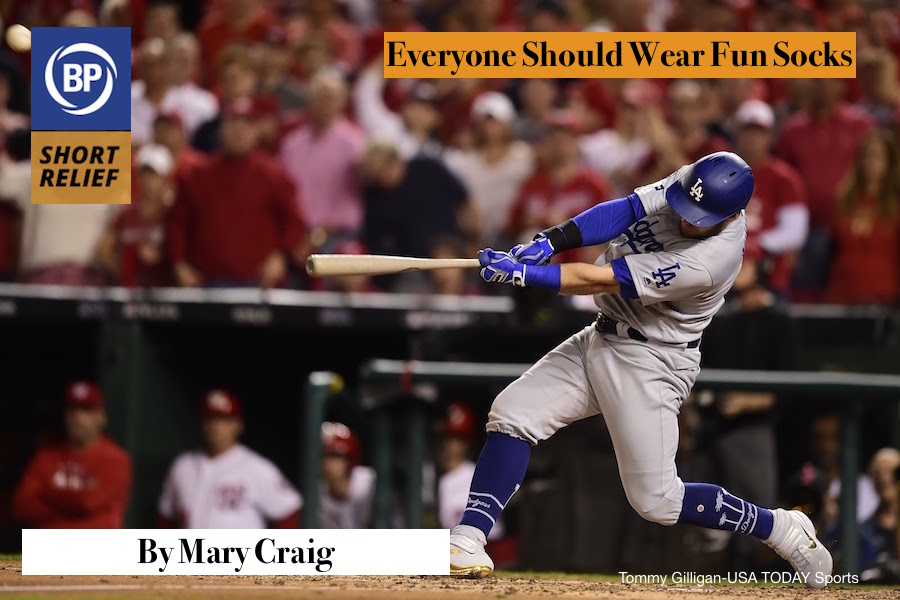 It’s a common adage that adults love receiving socks for gifts, particularly Christmas gifts. The reasoning behind this is it saves one from the hassle of traipsing back to the mall to purchase them after forgetting to do so for three consecutive trips. Sometimes these gifted socks are display a cheeky message or inside joke, but more frequently they’re a bulk package of standard black or gray, practical and entirely unremarkable, perfect for those who view purchasing socks as a burden. I, however, see the task as an opportunity.

There was a period in my life when the best present you could get me was a pair of colorfully-designed knee socks. I owned dozens of pairs ranging from the classic rainbow stripes to ones with monkeys on them; the more unique they were, the better. I’ve since moved on to the ankle sock (due, in part, because of my lack of height meant knee socks were actually mid-thigh socks), but my affinity for colors and patterns remains a constant.

For me, fun socks are an additional way to express my personality. They turn just one of a series of mundane daily tasks in the drudgery that is life into a brief moment of excitement. They allow me to match my socks to my outfit, which is generally saturated with color. And, most importantly, they turn the ugliest body part into something beautiful.

I could not have been more delighted to see Max Muncy sporting blue and white palm tree socks during Sunday’s Game 3. Though not as wonderfully outlandish as some of the Players’ Weekend choices, these socks nonetheless represented a lovely break from the everyday plain blue. Their appearance on the national stage was so refreshing that I’m willing to overlook the fact that it’s probably a marketing ploy to sell more of the socks, which are available through the Dodgers’ MLB Shop page (don’t purchase them; learn how to knit your own).

My hope is that MLB will eventually reach a stage in which a multitude of players are allowed to regularly display their personality through their socks. Not only will it cultivate creativity and give players on perpetually losing teams a little bit more excitement. it will also lead to more players wearing high socks, and we’re all winners when that’s the case.