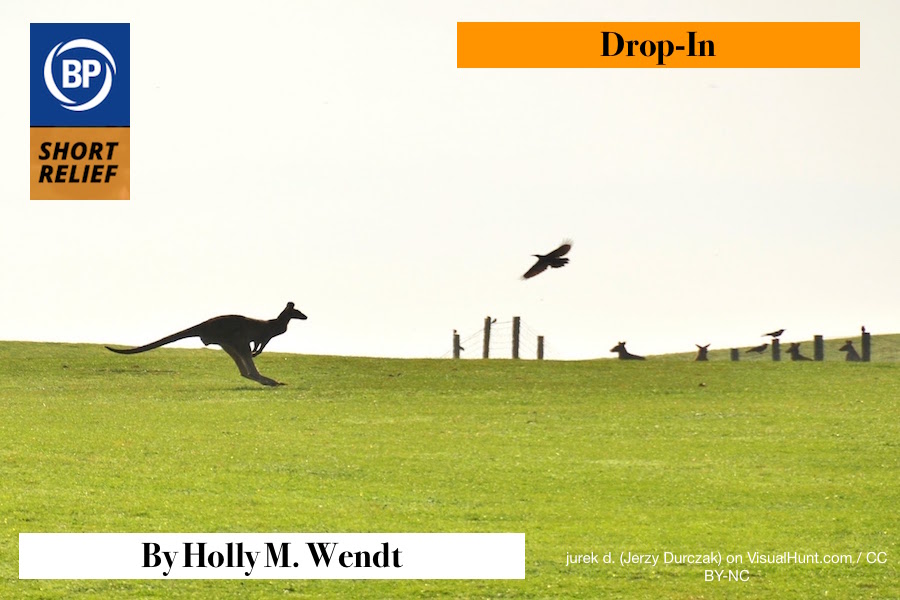 As some readers may be aware, the NHL season began on October 2, the second day of the MLB playoffs. I appreciate the annual overlap, the way hockey steps in to ease the sting of losing baseball, other games crowding in to fill the slowly contracting baseball schedule, and I appreciate the desperate festivity of both a season beginning and a season ending at once. Both leagues heave their best (or at least most recent and fervent) marketing efforts into the ether. The pre-game promos, the special guests, the commemorations — there’s a lot.

On Wednesday night, the Las Vegas Golden Knights began their season with what they called the puck drop from the greatest altitude, as though they needed more hype from the recent success and bad blood between themselves and the San Jose Sharks. But this apparently happened: the Golden Knights sent a hockey puck more than ninety-four thousand feet up, by virtue of a weather balloon. When the balloon popped, the puck and its vessel fell — into Death Valley, coincidentally — where it was retrieved by a trio of Nevada State Troopers. The puck was then brought into the arena on foot, where one of the officers dropped it from the very customary waist-height between the Las Vegas and San Jose captains.

Why tell you about this? Because if the Las Vegas Golden Knights can claim all of these various steps as a single action — the whole process, which involved a weather balloon, a tracking device, three parties of searchers, ground transportation, and a walk into the arena — the possibilities for ceremonial pitches crack wide open.

Some possibilities to imagine, if you will:

• On the outskirts of Brisbane, Queensland, Australia, an inquisitive joey picks up a baseball and leaps into her mother’s pouch. The kangaroo duo make a spirited and determined course south to Sydney, where some helpful parties (perhaps in the guise of a traditional Qantas aircrew, or perhaps a team of dedicated albatrosses, or perhaps a pod of thoughtful dolphins) offer transoceanic assistance. After landing in LAX or bounding up the beach, our marsupial maestros take the mound.

• A trio of enterprising youths stand in a parking lot in Houston and assemble their PVC-pipe treasure: a potato cannon. With the aid of several cans of Aqua Net, they launch a baseball over the bank lights in left-center. When it lands and rolls into the infield, only slightly scorched, the relevant local celebrity picks it up and loops a pitch, high and outside, to a waiting George Springer.

• Somewhere in Mercia, a swallow — or rather two swallows — discover a baseball. How this baseball arrived, the swallows do not know (being birds and not great fans of baseball), but we can surmise the ball to have been one of those ejected from London Stadium this past spring. The swallows, overcome with sudden migratory compulsion, suspend the baseball between them on a line and fly not south, but due west, determined to return it to the batter whence it came. An hour before game time in Yankee Stadium, two exhausted birds find a tall and sturdy perch. Aaron Judge feels a curious weight on his hat and a baseball lands on his foot. It feels special. It must be for the opening ceremonies. 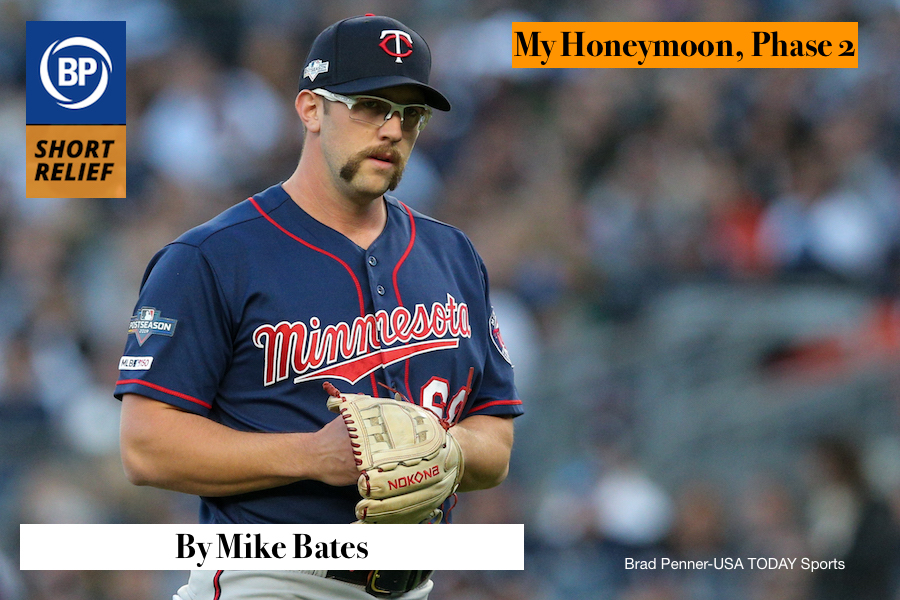 After leaving Chicago on Sunday morning, my wife and I drove north to Marquette, Michigan to begin a trip across the Lake Superior region, taking in several local museums and historical centers along the way, and stopping at every single roadside historical marker we saw.

We learned a lot. We learned about how Scandinavians, Italians, Scots, and Welsh were recruited to work in the iron ore mines across the Upper Peninsula, northern Wisconsin, and Minnesota. We read through both critical and uncritical takes on the owners and operators of the companies employing them, their use of company scrip when cash was “unavailable” and how “sacrifices,” due to carelessness and lax oversight, of men making less than a dollar per day were memorialized.

Today, they are lionized as the people who helped build this country. But they died all the same. In Ishpeming, Michigan, for instance, 51 of them drowned in a muddy sludge that flooded their mine when someone’s misplaced dynamite blew a hole through the bottom of a marsh. One man climbing six hundred feet of ladder, neither able to see where he was going most of the time nor get a sure purchase on the muddy rungs, was the only one who escaped. The only sign of their existence is in Ishpeming, far from the sealed mine entrance, that lists their names.

Randy Dobnak started Game 2 of the ALDS for the Twins against the Yankees while I was gone, giving up four runs in two-plus innings of work. You might have heard (if you have ears) that during the offseason Dobnak drove for Uber to make enough extra cash that he could survive during the baseball year.

Dobnak was undrafted out of Alderson-Broaddus College in 2017. He was signed as a free agent by the Twins and assigned to their rookie league team in Elizabethton. He was promoted to Cedar Rapids before the season ended. He spent all of 2018 in Cedar Rapids, making $1,100 per month, before leaving for the relative cash bonanza that is Uber’s $12 per hour average take-home pay, according to the Economic Policy Institute.

I don’t feel bad for Randy Dobnak now. He’s a major leaguer and he looks poised to last at least a few years on baseball’s biggest stage. But I’m angry for all the other Randy Dobnaks who won’t make the majors and subsist on peanut butter and jelly sandwiches from tiny pregame spreads, and are forced to supplement their in-season income in a $10 billion industry by chauffeuring us around when September rolls around. A swamp is not likely to fall on their heads, but as the cost of living rises and their incomes stay relatively flat, they are increasingly under water, and exploited by all sides. 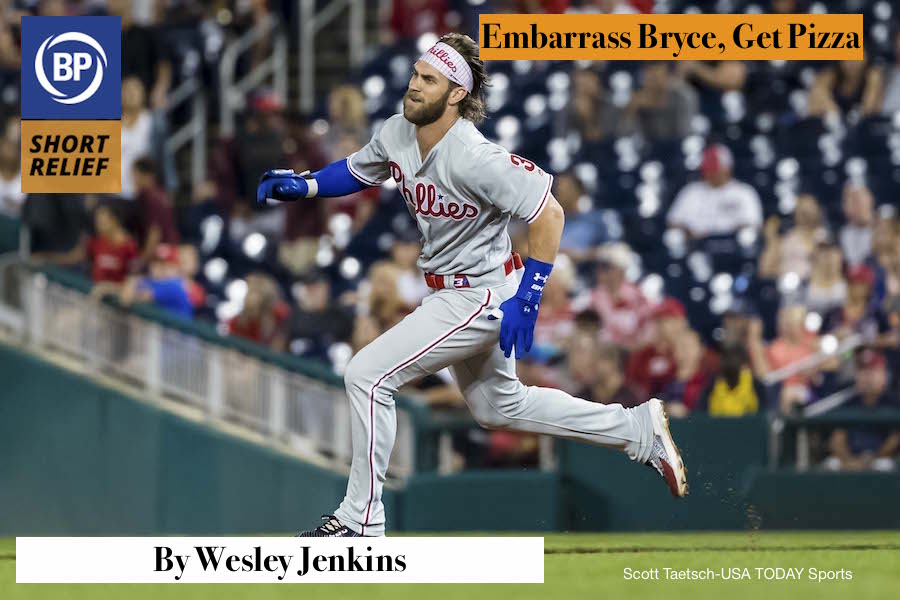 Some ballparks have deals to give away someone else’s food. If the Reds strikeout 11, everyone in the stadium gets LaRosa’s pizza. If the Diamondbacks score five, head down to Taco Bell for three free tacos after purchasing a large drink.

A few weeks ago, in honor of Bryce Harper’s final return to D.C., &pizza offered a $3 pizza to fans any time Harper struckout. All you had to do was text #UROUT within three minutes. And with the Nationals seeking to clinch a playoff spot (they did) and the Phillies seeking to salvage their dignity (they did not), the stakes couldn’t have been higher for such a deliciously petty promo.

I found out about the deal on Monday well after the game’s end. Bryce had struck out twice. Tuesday, I bounced from work to an alumni event to a pizza parlor for dinner. Bryce did not strike out on Tuesday, but the Nationals did clinch the Wild Card. My pizza cost $20.

Wednesday, I went to the game. I had the four easy steps to earn my $3 pizza saved on my phone. Somehow, I botched all four.

I didn’t actually need to watch the game. Casually checking the box score to see when Bryce was batting would have done the trick. Could have saved the ticket price that way too. A $3 pizza at the cost of a $20 ticket looks a lot like a $23 pizza when it’s all said and done. Or so I told myself after I got on the wrong train and missed Harper’s first at-bat.

It happened in the sixth at 8:33 p.m. Harper’s third at-bat lasted three pitches, all three strikes, putting three minutes on the clock. Harper began his walk back to the dugout, and I had my text in by 8:34. Why leave anything to chance?

3. You’ll receive a code that you can use to purchase a $3 pie online or through the &pizza app

The code never came. I turned to Twitter, the modern-day customer service desk, and found @andpizza repeating one message over and over: “Hey we’re looking into this now as we’re aware there was a app/site crash – if you texted us for the code within the appropriate time frame we’ll follow up with you via text.” Comforting, if only mildly.

4. You can schedule your order for up to a week out

When Harper jogged to the dugout in the bottom of the eighth, finally free from the fans’ torment, no reply had come. The Nationals won, and I boarded the (correct) train home without a $3 pizza. 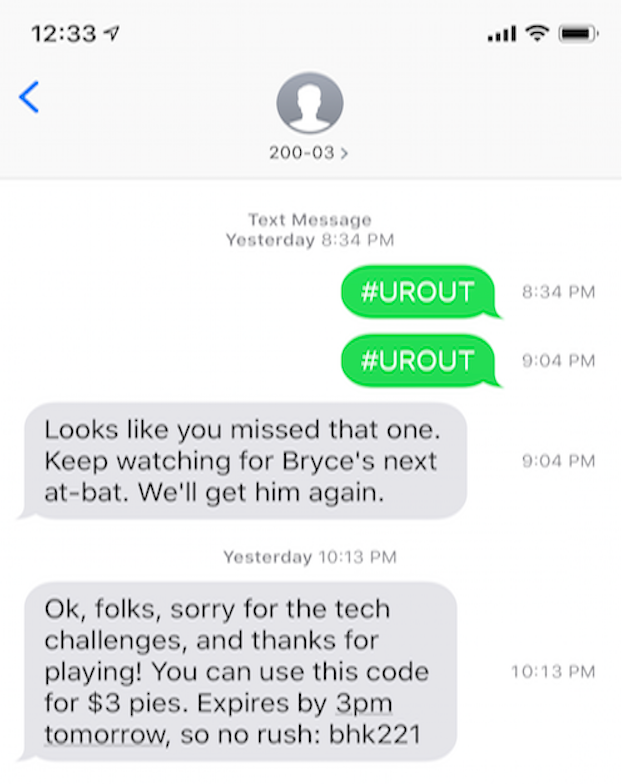 Except, the website didn’t recognize the code. Hitting “Apply” only refreshed the page, revealing the same price as before: $11.28. Bryce Harper may inspire pettiness, but pettiness is no match for technical difficulties.