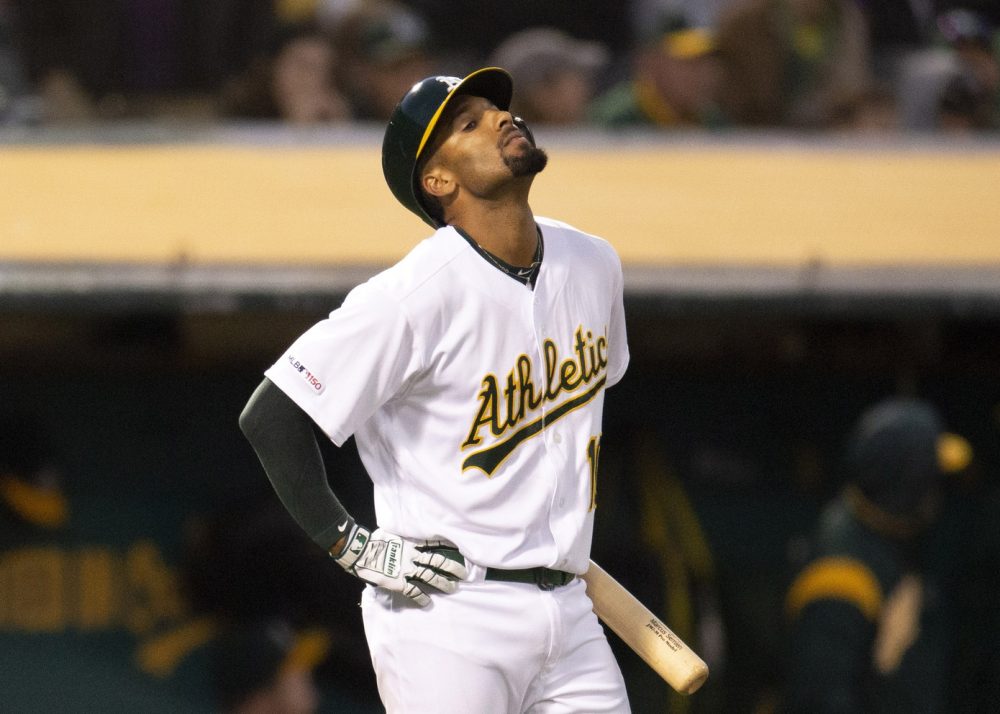 As the 2019 season’s conclusion draws near, it’s never too early to start looking ahead to 2020. For some teams, sooner than others. As each team’s playoff hopes officially end, we will be looking back at what went right and wrong for them this season as well as what to expect heading into next season. To read every entry in the series, click here.

The A’s had what can only be described as a Very Oakland Year, which, to be clear, is a positive thing. It was almost a carbon-copy season from the year before where they went on a tear beginning in mid-June. On June 16, the A’s held a 37-36 record and were in third place in the AL West. From that point on they surged to a 60-29 record and another 97-win season. Who can argue against 97 wins, a run differential of +165, and a spot in the Wild Card Game? Final result be damned.

The offense was powered primarily through players Oakland obtained in the draft or via trade (basically: they ain’t signing free agents). And powered it was. The A’s hit 257 dingers, the most in franchise history. It was the eighth-highest single-season total in major-league history, yet only good enough to rank fifth in this just-completed season. A franchise record seven players hit 20 or more home runs.

The offense averaged 5.2 runs per game and was led by shortstop Marcus Semien, who enjoyed an absolutely transformative, breakout season. With a 7.5 WARP, he concluded a career-best. It was the third-best season in the AL behind a couple of guys named Trout and Bregman. He tied the Oakland franchise record for runs (132 with Reggie Jackson) and finished third on the club single-season lists with 83 extra base hits, 187 hits, and with 343 total bases. It was an offensive tour de force and an all-out assault on the Oakland record books.

And then there’s his defense. When he arrived in the East Bay, his defensive reputation was odiferous. That year he ranked 53 out of 58 shortstops on our FRAA leaderboard at -4.4. This season, his turnaround was complete. He finished with a 4.2 FRAA, the 11th-best out of 59 shortstops. He won’t win the MVP but will definitely finish top five with a top-three finish a strong possibility.

Speaking of well-rounded play, Matt Chapman did it all once again for Oakland. Now in his third season in the majors, he is the top third baseman in the league according to FRAA (12.9) and finished with a 120 DRC+. He hit a career-high 36 home runs. Also with a career-high 36 dingers was Matt Olson, despite missing 34 games to the IL after suffering an injury in the season opening series in Japan. He didn’t miss a beat when he came back, playing second fiddle on the team with an average exit velocity of 91.9 mph to Chapman’s 92.6 mph.

Mark Canha and Ramon Laureano were both members of the aforementioned 20 home run club. If Canha got the ball in the air, lookout. He finished with a 21 percent HR/FB rate. Laureano hit in the lower third of the order for the first two months of the season. Once he moved up in the lineup in mid-June, he hit 331/.390/.663 the rest of the way with 14 of his 24 home runs, despite missing 32 games to the IL.

Given that all of the above players were either signed or acquired via trade, the lethal Oakland offense can only be described as a scouting and developmental success.

On the pitching side, Executive VP of Baseball Operations Billy Beane and General Manager David Forst splashed some cash on the free agent market in the offseason.

Mike Fiers, acquired during the now-departed waiver trading period in August of 2018 was retained at a cost of two years and $14.1 million. He rewarded the A’s with 33 starts, a 3.90 ERA and 5.06 DRA. Oft-injured Brett Anderson was brought back with moderate expectations at $1.5 million, yet tied a career high with 31 starts and 176 innings. A bit of a throwback with a 4.6 SO/9, he nevertheless finished with a 3.89 ERA and a 5.65 DRA. The advanced metrics on the A’s top starting pitching duo isn’t impressive at all, yet the team won 42 of their combined 64 starts, a .656 winning percentage.

Chris Bassitt hit career highs in starts and innings pitched on his way to a 8.8 SO/9 and 2.9 BB/9. He finished with a 3.81 ERA and 4.45 DRA, good for a 2.0 WARP. He ran out of steam toward the end of the season before the A’s shifted him to the bullpen. They also got a healthy Sean Manaea back at the end of the season and, paired with Jesus Luzardo and A.J. Puk, gave the A’s a look at what potential top of the rotation arms look like. Health permitting, next year looks like a good one for the rotation.

I am contractually obligated to drop at least one Moneyball reference in any Oakland A’s season recap so here goes… In the book, Beane famously said, “My shit doesn’t work in the playoffs. My job is to get us to the playoffs. What happens after that is fucking luck.” We need to append this quote from playoffs to simply the Wild Card. Since the league went to a one game, win-or-go-home Wild Card matchup to advance to the Divisional Series in 2014, the Yankees and A’s both have appeared in this game three times to lead baseball. The Yankees have won two of those games. With their defeat to Tampa on Wednesday, the A’s are now 0-3 in the Wild Card Game. In fact, their losing streak in deciding postseason games has now stretched to nine, the worst mark in MLB history.

Oakland’s October record this millennium is the stuff of nightmares.

This is also the appropriate place to mention how Khris Davis let everyone down this year. The world is quite literally on fire. We crave the familiar, the comfortable. Davis and his .247 batting average is the baseball version of chicken pot pie. It’s not exactly the best thing going, but who cares? It’s fun, reliable and tasty. After finishing at .247 for four consecutive years, Davis could only muster .220 in what was his worst offensive season since he arrived in the bigs in 2013. His DRC+ of 91, .293 OBP, and .387 slugging percentages were the worst marks of his career. The dip in power was especially troubling considering he’s on the wrong side of 30. He managed just 34 extra-base hits and saw his ISO drop to .166, nearly 90 points below his career mark. The silver arbitrary endpoint was that on May 21 Davis was hitting .247 when he hit the IL with a left hip contusion. He wasn’t the same after the injury and hit .207 the rest of the way once he returned. Nothing lasts forever…

Frankie Montas was in the midst of a breakout season in the rotation before he was dinged with an 80-game suspension for testing positive for Ostarin, a performance-enhancing drug. He returned for one final start in September but was ineligible for the postseason. Montas finished with a 3.16 DRA and 2.7 WARP and the odor of regret.

It’s a long season, and the A’s started it in Japan, so you are forgiven if you don’t recall the Kendrys Morales Era. When Olson went on the IL after undergoing a hamate excision procedure after that season-opening series, Oakland, desperate for a 1B/DH type, surfed the waiver wire and came upon Morales who had just been designated by Toronto. At least the A’s only covered around $2 million of the $12 million owed to the aging slugger. Olson recovered enough to play in 127 games, meanwhile Morales bombed out, hitting just a single home run while seeing his ISO crater to .056 in the East Bay, nearly 140 points below his career average. He was released in May.

The A’s always seem to be stealth players in the market and once again, they will need to find some innings. With Anderson, Tanner Roark, and Homer Bailey eligible for free agency, one of the oldest rotations in the league figures to get younger with a full season of Manaea and Montas along with top prospects Luzardo and Puk. Health is always an issue in any rotation and the A’s seem to understand the importance of depth better than most clubs. All four of the A’s young arms missed considerable time due to injury or suspension this year. It’s conceivable they retain either Anderson or Roark, but with the offense in its collective prime it would behoove Beane and company to be aggressive while looking for pitching depth. Adding Zack Wheeler as a swing-and-miss guy would anchor in the rotation. Or how about convincing Madison Bumgarner to move across the Bay? If you can’t get a victory in a winner-take-all game, why not go for the guy who has literally made a career out of postseason dominance? That gives the front of the rotation some veteran heft that could buy time for the Luzardo/Puk to recover some of their lost development time.

It’s a lovely time to be alive in this organization, at least on non-win-or-go-home game days, anyway. Oakland’s young are on the wax right now, with a stout system shadowing a very good young core at the big-league level. The green- and gold-studded crown jewel glinted intensely under his first October light yesterday, and it sure looks like a forever kind of love. Second fiddle didn’t get a chance, but he’s not quite as ready for primetime off Tommy John as his fellow southpaw bolt-thrower. A.J. Puk‘s as good a bet to contribute dominant major-league innings next year, though, and the two represent the most electric ready-for-The-Show tandem of arms in baseball.

We got a fine accounting of the duo’s batterymate for the next several years down the stretch as well, and in limited sample Sean Murphy pretty much did what he can and probably will do. They’ve even got one of the funner and wilder wild cards around in Jorge Mateo, a burner who really isn’t all that great at stealing bases and whose outburst this year following several of diminishing prospect returns is perhaps the ultimate Triple-A ball shruggy guy emoji.

Perhaps most excitingly of all, there are some very A’s pitching prospects bubbling up into likely relevance for next season in the hot quarter of Daulton Jefferies, Parker Dunshee, James Kaprielian, and Grant Holmes. The formers are stuff-limited out-getters in fine Oakland form, while the latter are “maybe!” stuff- and injury-havers. There will be options, and depth, and it will be cheap, and Billy Beane will get some sleep eventually. —Wilson Karman

2020 will be the Year of the Athletics

Enough of this Wild Card heartbreak. The A’s are setting their sights on Houston and the top of the AL West in 2020. With the solid nucleus of young bats, quality defense, and the free agent acquisition of a top starter to solidify the rotation, Oakland puts everything together in 2020 to win the division for the first time since 2013.

You need to be logged in to comment. Login or Subscribe
Michael Gravinese
Regarding your 2020 lineup, no Khris Davis at DH. Really?
Reply to Michael
Collin Whitchurch
This was an oversight and the lineup has been amended. Thanks, Michael!
Reply to Collin
Randall Wong
Semien scored 123 runs, not 132.

Is Piscotty presumed to be unhealthy for next year?
Reply to Randall
4min33
A little odd not to mention the dumpster fire that was the TnT non-dynamite duo, Treinen and Trivino, or the bullpen at all for that matter.
Reply to 4min33