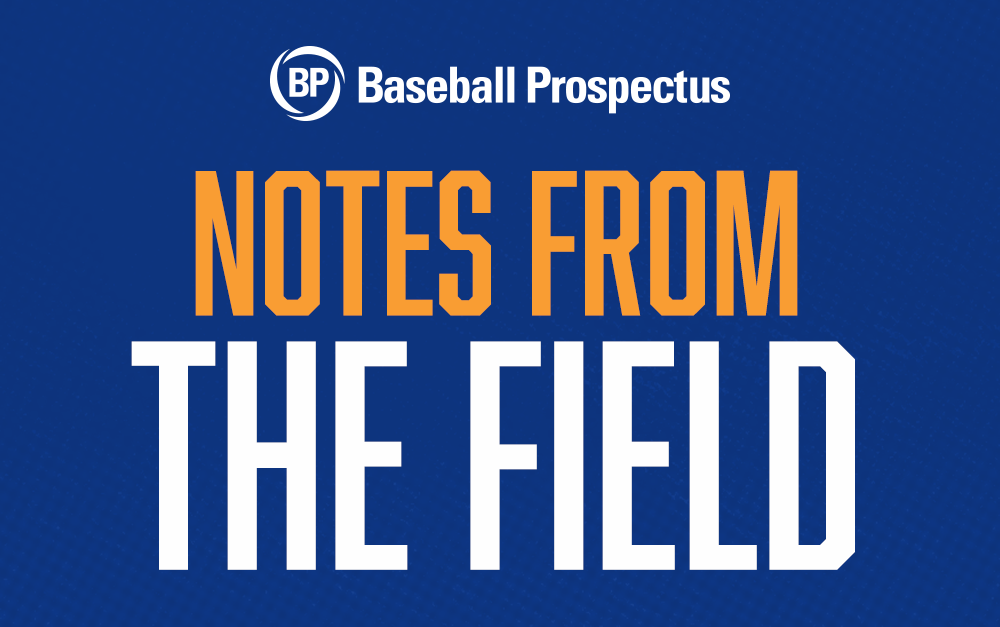 Kevin Carter has eyes on a novel development program the Rangers are running this fall. Part One of this series can be found here.

I knew by his listed height and weight that Sherten Apostel was a large human, but seeing him in person is something different. His 6-foot-4 list height probably undersells him a bit and he’s 230 pounds of muscle with a massive frame that could support even more weight comfortably. He has a longer torso with broad shoulders and a strong base. Apostel is a good athlete for his size and manages to make short explosive movements that you wouldn’t expect from someone this big. He’s coordinated and moves with an athlete’s confidence.

The right-hander makes a small leg kick before torquing his core and bat behind his head, initiating hip rotation with his back leg and exploding towards the ball. He decelerates the front half well and transitions the power generated with the lower half to the ball on contact. The swing has some length to it given his height, but he still generates plus bat speed. Apostel gets on plane early, is comfortable adjusting to ball location, and can use all fields with power, all three of which can help mitigate the longer swing path. Adding to his strengths, Apostel has one of the best feels for the zone I’ve seen in a minor leaguer and is quick to adjust to spin. While he’s currently “too patient” on balls in zone, his approach and plate discipline are true weapons for him. Apostel will likely see his fair share of strikeouts, but his contact quality and on-base skills will go a long way towards overcoming the loss in value there.

Apostel’s strength is tremendous and he produces plus plus raw power, most of which his swing allows him to fully access. Apostel is capable of long, hard fly balls and line drives to all fields which leads to both doubles and home runs. His strikeouts and walk totals may limit the counting stats, but Apostel should maintain a high ISO in any league.

Defensively there are some issues, but not unsolvable ones. Apostel has good instincts and a quick first reaction, but he is heavy on his feet and his footwork is raw. If he’s able to clean up his play on balls not hit directly to him he has the tools to be average (for at least a couple of years) at the hot corner once factoring in the double-plus arm. If the improvements at third don’t come, Apostel is already working on the skills that could see him transition comfortably to first, where his bat will still likely play. I’d avoid putting him in the outfield despite the big arm due to poor foot speed.

Apostel profiles as a major league regular at an infield corner long term driven by walks and his power bat. If he can improve the defense to be an average defender at third and improve his tendency to be too patient on balls in the zone, he could be a plus regular at the major league level.

Huff is something of a helium guy as he absolutely torched Low-A this year before being promoted to High-A Down East. Huff is also a large-bodied 6-foot-4, 235-pounder who has completely filled out a strong frame that would look right at home in a “Murderer’s Row” type middle of the order. Huff is also a good athlete with impressive body control and some quick twitch movements that look a bit out of place with his build.

Before discussing any issues here, there’s a lot to like. When Huff is sitting fastball, but recognizes breaking ball/off-speed he does an excellent job adjusting by slowing down the chain of events his hip fire/hip deceleration starts. Huff also generates significant barrel velocity, accelerates his barrel well, and is coordinated. He has massive double-plus raw power and the swing taps into it all so contact will be the main limit for him there.

That said, he doesn’t recognize spin at a high level yet and it leads to a lot of swings and misses. That’s compounded by the fact that he’s an aggressive swinger on anything near the zone. He likely won’t be a high average/OBP hitter in the majors unless he makes significant strides in pitch recognition.

Defensively Huff is better than you’d expect for a 6-foot-4 catcher. He has good hands and strong wrists, so while some of his framing movements can be a bit jerky (especially low in the zone), he sticks the landings. His blocking isn’t ever likely going to be a strength, but he flashed the ability to get down quickly enough on a ball thrown in the dirt in front of him and picked one arm-side. He has a plus plus arm and a solid transition, which can help with his value behind the plate a bit.

Huff’s defensive profile, significant raw power, and good physical hit tool markers should carry him to a tandem catcher role in the majors. There’s both tremendous upside and significant burnout risk given that he’s both a catcher and a hitter with loud tools and approach/pitch recognition issues. If everything clicks, he could be one of the premier offense-oriented catchers in the league.

Another right-handed, big-bodied hitter in the Rangers system, Reed is a true 1B/DH type. He carries a bit of extra weight on a densely muscled package and a lower half that broadcasts his deadlifting capabilities. Terry’s shortened his swing quite a bit and it’s paying off as he’s getting better barrel acceleration without sacrificing too much of his double-plus raw power. Terry has quality feel for barrel and recognizes above-average spin well. He has the makings of both an average hit tool and a plus power tool if he can be more selective with the pitches he attacks early in counts. He will need to hit as he’s a 20 runner and a true first baseman, but Terry has absolutely smashed his past two seasons and could boost his stock by adjusting well to Double-A pitchers.

Stop me if you’ve heard this before: large bodied right-handed hitter with big time raw power, good coordination, etc. Reed is another piece in the same vein as Curtis Terry with a bit less explosiveness, but better pitch selection. He has a longer swing that generates significant power and loft, but that also means he has more natural holes than guys like Terry, Huff, for Apostel. Reed’s issues there will likely keep him from providing value on a major league team down the line despite his advanced approach unless he is able to make a physical change or tweak that allows him to generate more explosiveness in his swing.

This guy has the tools you want to see in your Low-A position players. He’s an instinctual and aggressive athlete with good explosive movement traits and plus body control. He has the demeanor of a 10-year veteran that will be off-putting to your grandpa, but fun to watch for the rest of us. He already shows advanced instincts at second base and excellent feel for the position and he should provide plus defensive value there. Offensively he flashes good hands and feel for hitting, but he’ll need to make some mechanical tweaks in addition to progressional improvements in pitch recognition. He currently pulls off the ball at times, which gives him both a pull-happy approach and a tendency to roll over on pitches near the outside corner. He has quick, whippy power and can generate pull-side home run power and there’s room for additional strength on his frame despite an already strong lower half. This is someone to keep a close eye on.

Kevin, did you manage to get a look at my Main Man Blaine Crim? I know he's about as long-shot as long-shot, short-right-handed-first-basemen-senior-signs get, but he's the guy my lizard brain picked to follow out of the '19 draft.
Reply to Maxwell
Kevin Carter
Yes, I have gotten some looks at Crim, and he'll be more fleshed out in my next round of notes next week.

Teaser, he does some important things pretty well, but he doesn't have a loud skill-set on the whole.
Reply to Kevin
Maxwell Hill
<333
Reply to Maxwell