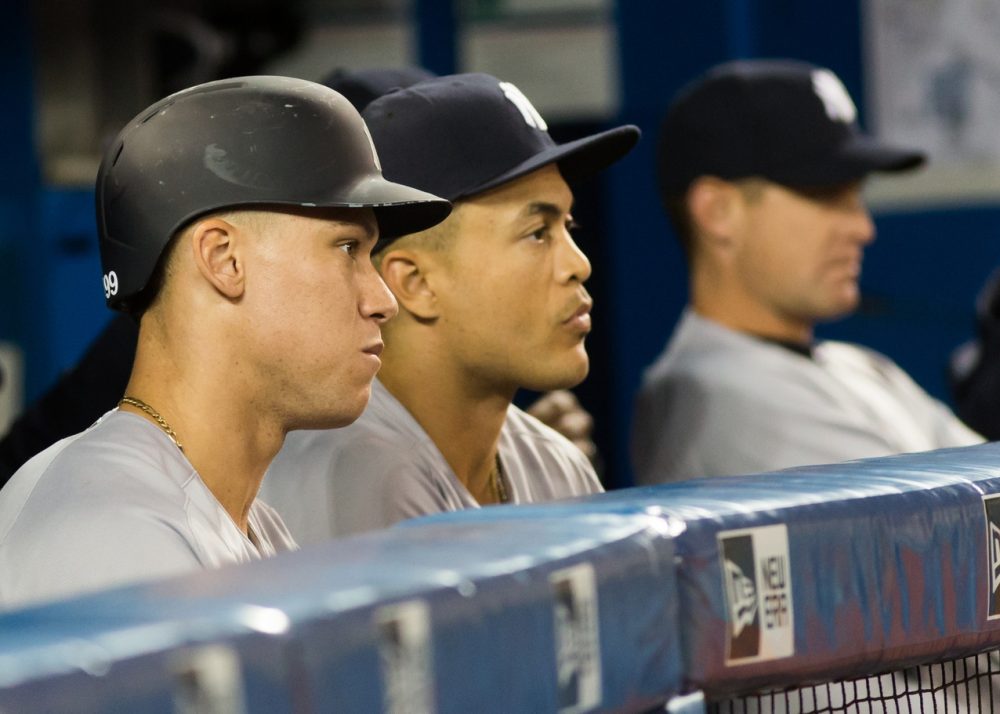 As the Yankees take the field in the Bronx against the Minnesota Twins tomorrow night, they’ll be looking to continue their most successful campaign in a decade into October. The team’s 103 wins this season — their most since 2009 — gives them the third-best record in baseball behind the Astros and the Dodgers and the No. 2 seed in the American League. The Yankees’ success in itself isn’t in any way a surprise: prior to this season, Baseball Prospectus’s PECOTA system projected the team to handily win the AL East, pegging them with 97 victories. This after a 100-win finish last year as the Wild Card team, and a 91-71 showing in 2017, a season in which some of their underlying numbers suggested they were among the best teams in baseball. With the same core of young, in-their-prime players intact, it made sense that they would build on their previous success.

But as on fire as the Yankees were in the win column, they couldn’t stop dropping (and rolling) to the Injured List. While they did lose their ace starting pitcher — Luis Severino — and a key member of their setup corps — Dellin Betances — for all but four combined games this season, they were arguably hit the hardest on the offensive side of things. Middle infielder Gleyber Torres was the only member of the Yankees’ starting lineup on Opening Day to avoid the injured list entirely, and even he had a handful of close calls where he was considered day-to-day with leg and abdominal maladies. All in all, a total of 30 Yankees spent time on the injured list this year, the highest mark in the majors.

Of course, the injuries didn’t keep the team from winning all those games. Gio Urshela came out of nowhere to post one of the best batting averages in the majors (let alone his penchant for highlight-reel defensive plays). Mike Tauchman also surprised many with his offensive and defensive prowess, especially in the middle of the season. Mike Ford finally got a shot coming up from Triple-A and slugged over .500 with good plate discipline. There’s been no shortage of surprise contributors on this Yankees team — a testament both to New York’s front office in identifying talent, and also perhaps to, well, some good fortune.

But today, rather than focus on these “Next Men Up” in particular, I wanted to take a look backwards and see if there’s a way to put this Yankees team into context. What they’ve been able to accomplish this year despite their injury woes certainly *feels* unusual, but is it? I went looking for instances where teams possessed some of the seemingly-unique characteristics of this Yankees to try to find some precedent for these Bronx Bombers.

As mentioned above, the Yankees’ 30 players over the course of the season was a 2019 major-league high. Using transaction data from MLB, I was able to look back to 2009 to see which teams over the past decade-plus had similar injury tendencies. For this time period, the Yankees are on their own at the top:

In 2016, the Dodgers set the record with 28 injured players, and matched it again the next season; the woeful Pirates also had 28 players on the injured list this year. But the Yankees have them all beat. The shortening of the stint from 15 to 10 days in 2017 has made teams more willing to place players on the injured list, so it’s unsurprising to see so many teams from the past three seasons at the top of this list. Of course, many of these players went on more than once, so what if we expand this to look total stints on the injured list?

Note: each placement on the 10-day (or 15-day, for prior seasons) or 60-day IL is treated separately, so a transfer from the 10-day IL to the 60-day IL is marked as a distinct stint in the table above.

This year’s Yankees also have the most injured-list stints of any team since 2009. While some of these were short stays to manage nagging injuries, like CC Sabathia’s four trips to the IL to rest his degenerative knee, they also saw 16 trips to the 60-day IL. Those 16 long-term stints are tied for the most of any team since 2009, alongside this year’s Padres, the aforementioned 2016 Dodgers, and the 2013 Yankees. Even in an era of increased IL placements, the Yankees stand alone both terms of players and instances.

I mentioned that every player besides Gleyber Torres in the Yankees’ starting lineup was on the injured list at some point of the year. For those who don’t remember, this was the Yankees’ team supporting starter Masahiro Tanaka on Opening Day this year:

Bird and Andujar were out for the season with injuries. Tulowitzki got hurt after six games and retired from playing baseball. Stanton played only 18 regular season games this year, and only now does he look healthy. And yes, DJ LeMahieu, whose 4.8 WARP led the team this year, did not play on Opening Day and was viewed as a bench or “super-utility” player coming into the season. This collection of players got me thinking: how much of a team’s batting WARP comes from the players in their Opening Day starting lineup? And are this year’s Yankees out of the ordinary? I was able to get Opening Day lineups for major league teams going back to the 1962 expansion and adaptation of the 162 schedule, and from there, I compared the seasonal sum of their batting WARP to the team’s overall batting WARP. Clearly, this takes into account many factors besides injuries, but it does illustrate teams that undergo similar transformation. The chart below shows WARP from a team’s Opening Day lineup hitters versus that of the entirety of the team.

This year’s Yankees have the fifth-greatest difference in team batting WARP to Opening Day lineup WARP since 1962.  The top five:

We immediately see two interesting comparable at the top of the list in the 2010 Giants, who won the World Series, and the 2017 Dodgers, who came within one game of doing so as well. The Dodgers’ extreme reliance on depth during the Andrew Friedman era is no secret, as evidenced also by their injured-list maneuvering seen previously. The first of the “Even Year Magic” Giants seasons is of note for some star performers that took on prominent roles with the team as the year went on:

This year, the Yankees got all-star level performances from LeMahieu and Urshela, and the partial seasons of Tauchman, Maybin, and Ford combined for 4.4 WARP between the three of them.

This leads nicely into a third tenet of these New York Yankees: quite simply, they have a ton of quality hitters. Setting a minimum of 100 plate appearances, these Yankees had 12 hitters* with a DRC+ of at least 100 (if we’re really getting technical here, 99.5 since we’re rounding). Going back to 1921, the first season for which we have DRC+, that mark has been bested by only ONE team: the 1983 Yankees, a 91-win team that missed the playoffs due to eventual-world-champion Baltimore Orioles. To put this into graphical context, the chart below shows all teams since 1921 and the number of 100 PA/100 DRC+ hitters they had.

Clearly, it’s quite unusual to have this number of above-average hitters in a full or part-time capacity over the course of a season. Not only does it take a lot of talent, but it also requires there to be a lot of playing time needing to be spread around, which the Yankees’ injuries this year have allowed for.

The Yankees’ success despite being hit with a record number of injuries is undoubtedly an impressive feat. The recent iterations of the Andrew Friedman-led Dodgers, as well as the 2010 Giants, serve as reasonable precedents, but I think it’s safe to say that we haven’t seen anything quite like this before.