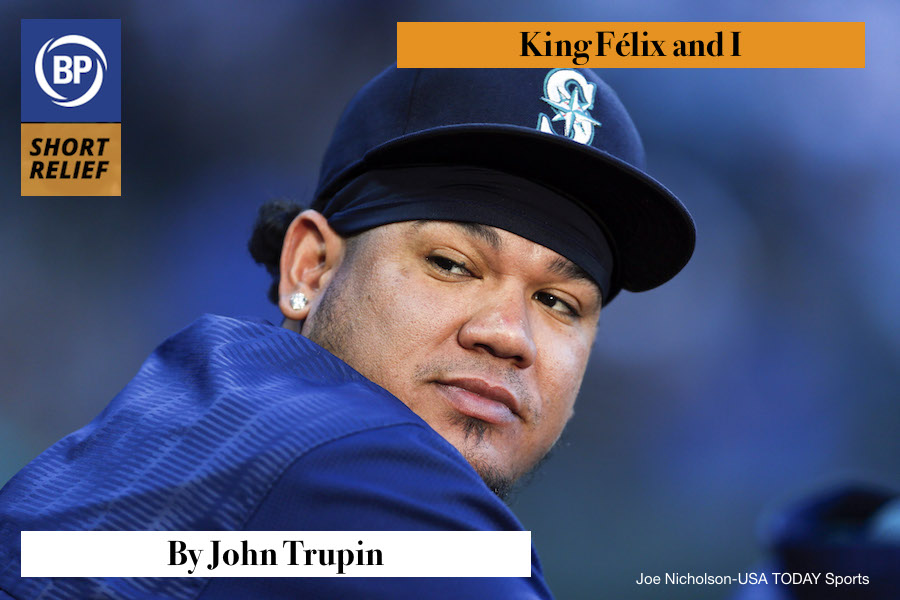 In between the white lines, or standing in line at the grocery store, I imitated The King. To the chagrin of my parents, friends, and significant others, any time I was upright was an opportunity to mimic my hero. As an athletic kid from Seattle with big league dreams, there was no better muse than Félix Hernández. Throughout middle school and high school, King Félix was not yet a paragon of loyalty, nor a tragic figure, nor any of the narratives he has shouldered these 15 years. He was a treasure map, with clues and secrets to be unlocked if followed correctly. His starts were appointment viewing, of course, but also opportunities to learn and later emulate whenever I toed the rubber myself.

The iconic twist at the top of his leg lift became a mainstay of my own motion. To come set, I too began to flutter my glove as I exhaled, composing myself as I adjusted my grip. My fist pumps came more freely as I watched Hernández win his Cy Young. I leapt with delight for my birthday that year as I tore through teal wrapping paper to find a Phiten titanium necklace. If something was right for The King, I owed it to myself to try it, including balancing my previously chaotic electrons.

My MLB aspirations topped out in Division III baseball. By then I was acutely aware that I would never take the field as a professional, but the game still nourished me, and I still trusted my King. Through high school, my fastball-curveball combo flummoxed hitters, but to be a starter a third pitch was necessary. All summer I looked to Félix once again as I attempted to ape his greatest weapon — the changeup that extended his reign. I googled his grip, watched videos of him talking about the pitch, and focused on each of his starts with a purpose. When I pronated my wrist at release I felt the ball roll off my fingers more consistently. What began as a flat, mediocre changeup became my premier out pitch, diving away from lefties and under the bats of righties. Never once did I fool myself into imagining my facsimile approached the original, but it was good enough for me.

At the end of that summer, Félix rode his cambio to perfection, one week before I left for college. I watched every out, weeping with joy as the final changeup froze Sean Rodriguez and he pointed to the heavens in ebullience. He was well and truly flawless, in a way few before and none since have been. His struggles over the past few years have been heartbreaking, but they do not blemish his memory, nor do they instill regret for attempting to emulate him.

Many of us will never encounter the type of peak experiences Félix achieved that day, or many other times throughout his dominant career. I will never throw a pitch that matters as much as the ones he will throw on behalf of the long-eliminated Mariners today, in his final appearance with the only club he’s known. But on a few precious days, when everything aligned, I fluttered my glove, twisted my hips, whipped my arm forward and felt like The King as the ball rolled off my fingertips, diving late below a helpless bat for strike three. 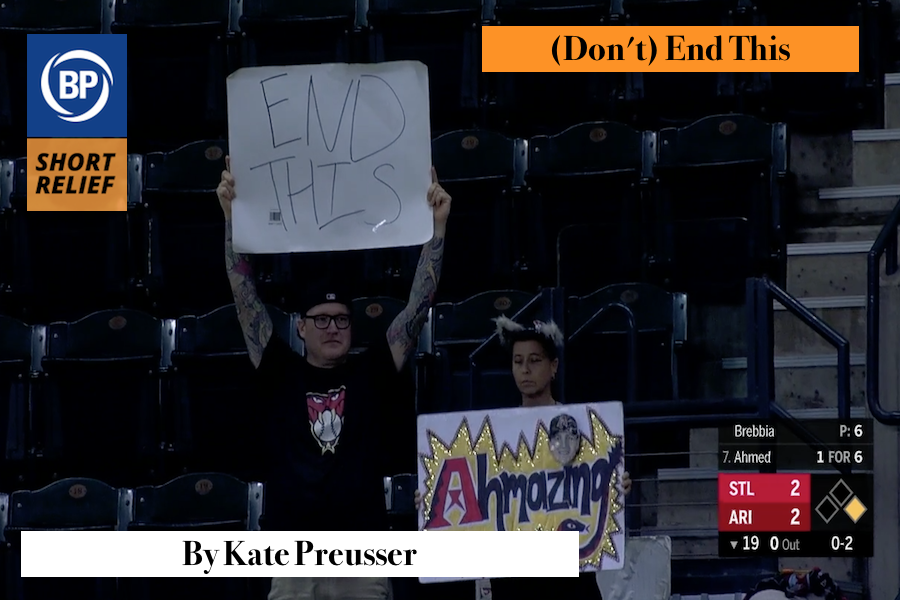 MLB insists on sending me no-hitter alerts and I could not care less. The Harlem Globetrotters are shutting out the Washington Generals? Well let me grab my fainting couch. What I do wish MLB alerted me to was extra inning games, with a louder and more persistent alarm the deeper the game goes. The other night there were not one but two of these blessed events, with the Giants/Rockies tapping out at inning 16 while the intrepid Cardinals and Diamondbacks came dangerously close to breaking the 20-inning mark. Some people (Rob Manfred) will tell you extra inning games are bad, and will even try to devise schemes to limit extra innings (smashcut to Rob Manfred physically dragging in the fences at Oracle Park). Other people (wimps) will insist on checking out of games before their conclusion just because “I have to work tomorrow” and “I just fell asleep in my popcorn” and “a seagull is nesting in my hair.” These people are categorically wrong! Extra innings are one of the things that make baseball beautiful, and we must clutch them protectively to our chests before falling asleep and drooling on them a little.

Baseball is, famously, the only major sport played without a clock (although that soon will change as Rob Manfred loads up his Krampus-sled with pitch clocks and flies around to all 30 MLB stadiums this offseason), which means a baseball game is over when it damn well feels like it, you hear, and if you sass it it’s not afraid to turn this game around and make it a doubleheader. Baseball lives on baseball time and sometimes that means you get a two-hour scrapper full of double plays and lights-out pitching performances and sometimes you get a Cheesecake Factory menu of a game, stuffed to the gills with dueling homers and double switches and Cory Gearrin standing on the mound peering into the sky like he’s waiting for whomever bodyswapped him and is the one who knows how to pitch to come back home. It’s a RICH TAPESTRY.

And sometimes a baseball game gets itself confused with an endurance event, like one of those things where participants have to keep their hands on the car the longest in order to win it, or these people who voluntarily shut themselves into coffins for 30 hours to win season passes to Six Flags, or marathons, and I’m not sure who I identify with less, the marathoners or the coffin folks. That’s what happened on Tuesday. Congratulations on the season passes to Typhoon Falls, Diamondbacks.

If you haven’t ever attended an extra-innings contest (my personal record is fifteen), the general progression is this: 10th and 11th innings are marked by some general grumbling, but mostly people are game. By the 12th there is a palpable stirring of anxiety; this is generally the first iteration of “I don’t care who wins, let’s just go home,” starting jokingly and becoming more plaintive as the innings wear on. Like any journey, there’s a point at which civilization deteriorates, and this is generally the 14th inning, when people begin to size up their neighbors for food. And yet, after a general clearing-out after the 11th inning, those who stay will remain. What do they hope to gain from this? Is it a sunk cost fallacy? “I’m already here, might as well see this through.” A desire for completism, the same kind of people who insist on frog-marching all the way to the end of a series that’s long since lost its luster?

For me, it’s all about the payoff when a team walks it off (I always root for the team walking it off), the celebration which is sweeter the longer the game lasts. There’s nothing I love more than this moment of madness: 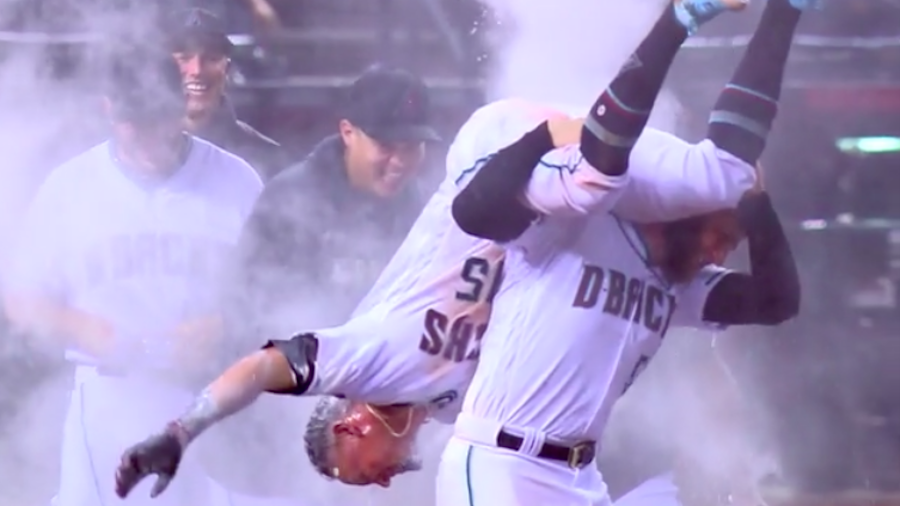 You keep your hands off my moments of transcendence, Robby M. For those of us who are fans of teams that don’t make the playoffs, this is as close as we get to euphoria. 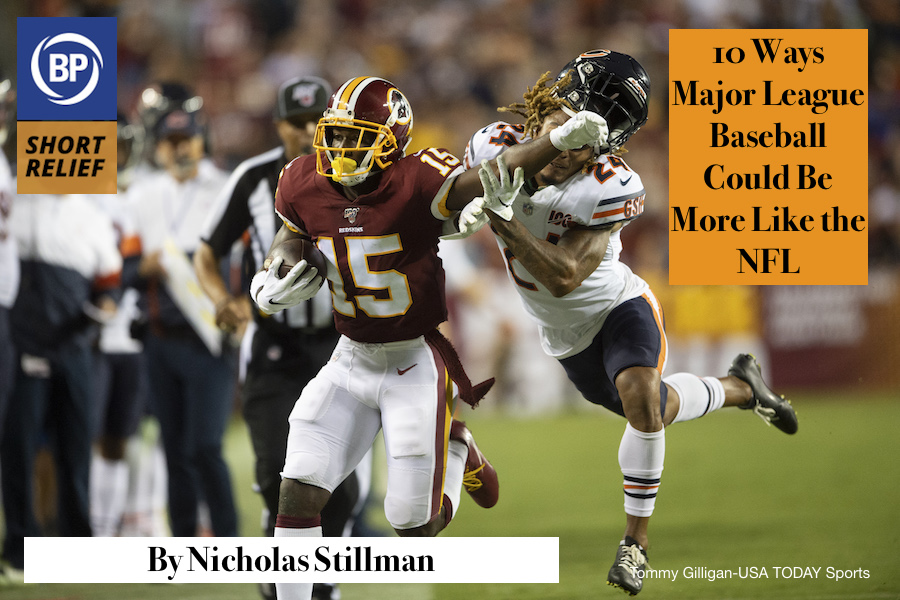 Football season has arrived and with it the inevitable muddying of fan loyalties. My friends have clicked their televisions over to the gridiron (the sport, not the 1850s steamboat landing in Sonora that supplied wood fuel to boats traveling the Colorado River) and their fantasy gridirons (again, the American Sport, nothing to do with steamboats). Their social media has been scrubbed of any memories of America’s Pastime, leaving me stranded in the rapidly declining amusement park of Baseball Land. The gates are open, the rides are still running, the people are gone.

In order to appeal to those Fans We Have Lost, I have come up with 10 ways the MLB could mimic the excitement, pageantry, and staying power of the NFL.

Despite refusing to institute a salary cap, MLB still ranks behind the NFL both in parity and, in a twist, average team payroll. MLB is an unregulated wasteland with neither cap nor floor. A financial back-alley guarded by a trenchcoated man, his jacket lined with juiced baseballs, selling them for whatever you’re willing to stomach. Let’s install a streetlight on his corner.

Players would be forgiven for shouting “here!” like they were in Mrs. Kline’s algebra class during the MLB Draft. Where’s the flavor? The fanfare? The dudes screaming? Where, I implore you, are MLB’s screaming dudes? The dudes scream because they feel. Let’s bring dudes who feel to the draft and let them scream those feelings at other dudes.

Feet? Really? Which sounds sexier: a) the bases are 60 feet apart, or b) only 20 yards to go, Big Boy? A “yard” is simple, strong, and three times as powerful. As the Liber Horn states: “And be it remembered that the iron yard of our Lord the King containeth 3 feet and no more.” The iron yard. Be it remembered.

4.Switch to a Base Ten counting system

Football is violent. The most common and loud complaint about football is that it is becoming less violent. People love violence (ever heard of a little thing called WWII?). The issue with baseball is that it’s soft. Tossing a little ball around with friends? New rule: all batters have to charge the mound after strikeouts. Loser takes a seat on the bench. Altuve v. Thor. There’s your ratings.

Fire the mascot. Get women to dance. Don’t pay them. Fire them if they wear sweatpants. Test their jigglines to ensure they jiggle the proper amount This, my friends, is how you get the dudes to scream.

7. Hit with your helmet

No bats. Hit the fastball with your head. That’s the point of the helmet. Concussions happen. Go cry about it. Brains are for nerds and math dorks. You a math dork?

Have them blow them every other pitch or so, wait three minutes, and then announce that nothing is wrong. This is what the people want.

Every player should be required to sing the National Anthem at full volume three times per game while standing on his tip-toes. Show respect. Put some America back in America’s Pastime.

Games need drama, weight, stakes. You need to make the sample small enough that the results are nearly completely random. In twenty games anything could happen. The Mariners went 13-7 in their first twenty games. There’s your drama.

Extra Innings? More like No Thank You I Have Had Enough of These Innings, I Don’t Need Extra. Flip a coin to decide who hits and who sits. Games are better when the outcome is decided by a coin.

You need to be logged in to comment. Login or Subscribe
Gary Gary
If little Robby Manfred wants to hurry through what he believes are his boring Major League baseball games, here is a simple and easy plan. Cut all games to five innings. Extra innings can last no longer than the ninth inning. If the game is still tied after nine the home plate umpire flips a special two-sided coin with Robby's face and rear end on it. Home team manager calls heads or tails. Game over. Then we all can go home and prep for an "exciting" day of work tomorrow.
Reply to Gary