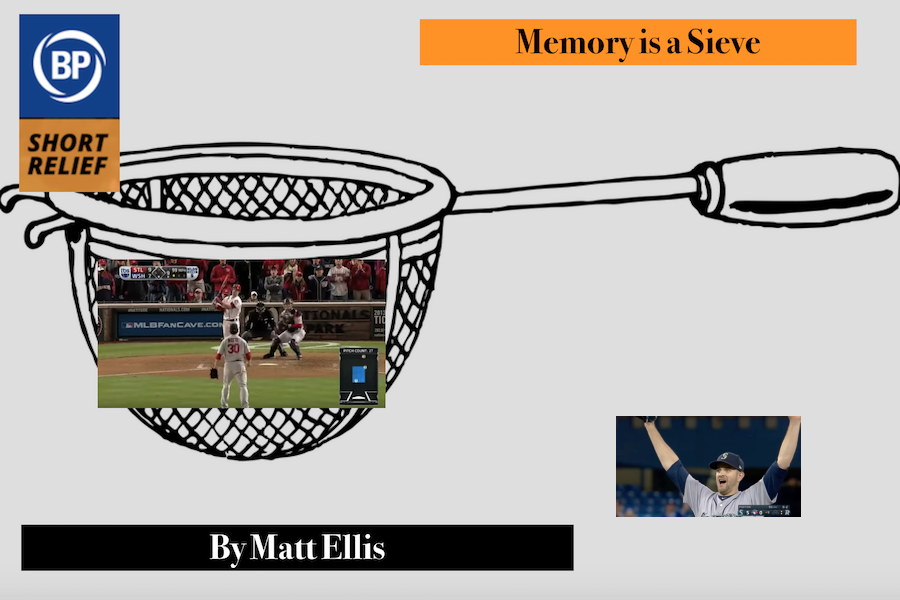 The Phillies have been officially eliminated from playoff contention today at Nats Park. pic.twitter.com/uRrw4MkDke

For some reason, I remember exactly where I was when the Washington Nationals were eliminated from the postseason in their first-ever trip under that moniker. I couldn’t tell you why I remember this — I’m a fan of the Seattle Mariners — but I do, vividly. I was drinking a whiskey and coke in the bar area of the Cinetopia living-room-style movie theater at the Vancouver, Washington Mall off 205, near Highway 500. I remember the room had a faint pink-ish, purple hue, which was probably the result of corny industrial grade “mood” lighting intentionally designed for a suburban area set ten miles out from a major city, and I remember that the entire wall facing me was lined with large television screens, one of which was depicting the evening’s events in Washington, DC.

I remember my roommate at the time, Andrew, was with us — I remember this because he met us at the theater despite the fact we were both going home to the same apartment complex once the night was to be over. The movie we were seeing was Sinister, a schlocky, over-ambitious horror film starring Ethan Hawke that would have looked a lot different in our post A24 “elevated horror” environment of Get Outs and Midsommars. While we were waiting for the movie to start, Andrew ordered a vegan flatbread pizza, which I remember for some reason (he wasn’t vegan), and as he was finishing it, I remember watching Mike Morse hit a two-run blast to put the Nats up by six in what surely punched their ticket to the NLCS.

Then I remember waiting for another drink as the Cardinals started to crawl back in the fourth inning. I remember this because I was still kind of surprised that I could order a drink at the bar and they would let me pick it up and carry it out of the seated dining area and into the hallway and in through a door leading to a darkened room where I could nurse it slowly through an entire movie, ostensibly near teenagers sitting within arms-reach; I do this without thought during the Avengers movies now. As the drink came I remember a shot of a young Bryce Harper without his hat or helmet in the dugout, that forcefully gritted jaw chewing on the invisibility of inevitability, facing defeat. I remember pangs of sympathy, less for DC-area fans and more for the justice of the whole thing: a fun postseason story given way to another one of those ones. I remember the movie wasn’t great, and that it had this stupid scene where a film projector stopped on a frame without its film catching fire and I said pshhhhh out loud like a jerk.

Six years later I watched as my team’s youngest ace threw his first no-hitter in his native country of Canada. I witnessed every pitch on television and I was happy for him, and I remember the odd look on his face once he clinched it, the ball making contact with the first baseman’s glove for the final out of the game. He had this strange look in his eye like he simultaneously saw the face of God while staring into oncoming headlights, and his mouth was kind of open but not open all the way. That is all I remember about that night — not where I watched it nor how he achieved 26 of his 27 outs on the evening — and I could not tell you why that is. 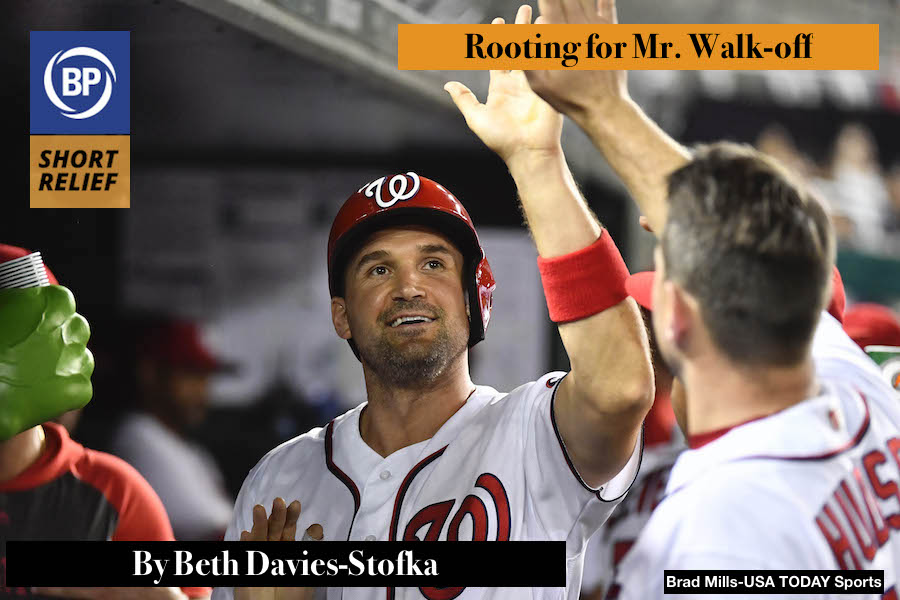 If you’re looking for something to root for as the regular season winds down, why not root for Ryan Zimmerman to hit a walk-off home run? He hasn’t hit one since August 22 last year when he hit his eleventh, and it would be very cool if “Mr. Walk-off” could hit one more this week. If he does, his twelfth will tie Ruth, Mantle, Foxx, Musial, and Robinson. Of course this won’t rock the world, but it would be a nice thing for the Nationals, their fans, and the Zimmerman family. And it would be a nice thing for me.

I followed Zimmerman closely when he played third base, until 2012. I made a point of it because he was so much fun to watch. The one time in six seasons that he made a bad throw, my husband, knowledgeable but indifferent to baseball, was walking through the living room and saw it. He paused the long-departed TiVo and went through the throw frame-by-frame, dissecting everything Zimmerman did wrong while executing the play. I protested this detailed postmortem. Zimmerman’s very good, I insisted. A few days later, Zimmerman went on the DL with shoulder inflammation.

Shoulder issues changed Zimmerman’s career, even if 2017 was pretty good, but it’s still been wonderful having him around. There’s nothing over-the-top about Ryan Zimmerman. I’ve seen him called stoical, but he’s not. He’s happy when things go well, and he’s optimistic when they don’t. He says he’ll take it a game at a time, and he does. He is a calm person who does things in a calm way, and we’ve had fifteen seasons to enjoy it.

I am not a calm person. I do everything in a completely freaked out way. I’m freaked out when things go well, and anxious when they don’t. I can’t take life a day at a time because I’m so fixated on what comes next. I spin out over spinning out. My whole life is oh-my-gosh and uh-oh. Ryan Zimmerman has a lovely calm demeanor, and I like the contrast.

I saw him hit that walk-off home run last August. The Nats were playing the Phillies, the pitcher was Seranthony Dominguez, and the count was 2-1. It was 10:49 PM when Zimmerman homered to right and sent everyone home. Now I’m watching tonight’s game. Again, it’s Phillies and Nats. Zimmerman is on the bench, and I am getting ready to submit my copy. Maybe, in a couple of hours, he’ll hit his twelfth walk-off homer. I hope so. I won’t take it calmly, but sometimes, that’s okay. 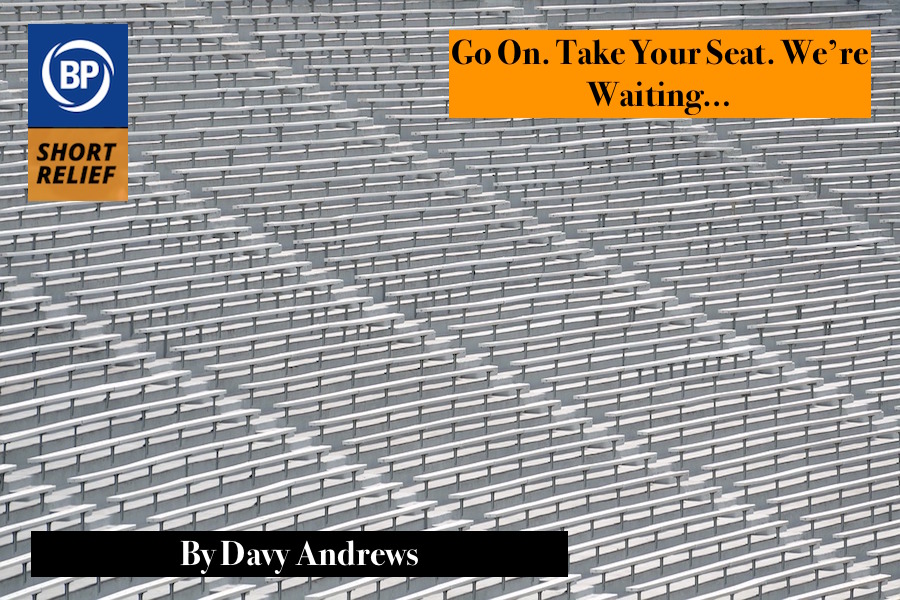 I have a new favorite thing. I was at Citi Field, and for a little while my favorite thing was the utter insanity of building a ballpark directly underneath an endless stream of airplanes straining for altitude at full throttle, but then a new thing came along.

I arrived early. I bought a turkey sandwich with both kinds of peppers. I took the escalators to the 500 level and followed a sign that said 504 and 505. I climbed the short staircase, gazing out at the field. I stepped onto the landing and turned around to locate my seat: SECTION 505, ROW 5, SEAT 4. Then I completely panicked.

There are: So. Many. Seats. Which is section 504 and which is 505? Do the seat numbers go from left to right or right to left? Why aren’t there any signs anywhere?

The panic soon subsided. All those questions, though not intuitive, are solvable with some logic. I found my seat. I ate my sandwich. I admired the underbellies of the departing airplanes. I brainstormed solutions: section signs on the staircase; row numbers on each step; bigger seat numbers. Done. Why had no one solved this problem before?

Then other people started arriving, and I got to see their faces as they completely panicked. I was so glad no one had solved this problem before.

As each new person climbed the steps, I luxuriated in my new favorite thing: the facial expression of someone who is instantly overwhelmed. It was if they had walked into Baskin Robbins, ordered a cup of mint chocolate chip, and then the server pushed them down into a school desk and said they could only get their ice cream after they passed the MCAT.

The whole thing is unfair. Walking up the steps provides your first good view of the field. A baseball field is a thing of beauty. It’s perfectly lit, brightly colored and symmetrical. It takes your breath away. Then you turn around, still enraptured, and suddenly you’re in a claustrophobic nightmare of brutalist architecture. A cellblock of concrete and plastic looms over you indecipherable. You look down at your ticket for your row and seat numbers, look back up, and find exactly zero indicators as to which is which. On top of that, there are hundreds of people watching. Mortified, you realize you better figure this out quickly or they’ll start yelling at you for blocking their view of the game. And these are Mets fans; yelling at people is like half the reason they’re at the game in the first place.

All of this registers on your face. Your eyes get big and your mouth goes round. After processing the enormity of the situation, your eyes narrow, hunting for a detail to work with. Your friend is already here and she’s wearing a Mets hat. That should help. There are only a couple thousand Mets hats in your field of view. Then there’s a huge roar and you look up with a start. Oh, no big deal. It was just the twin engines of an airplane flying directly over your head. Eventually, delectably, you give up and just start trudging, hoping for a signpost somewhere along the way.

That is my new favorite thing: momentary, low stakes terror. Citi Field turns briefly into a haunted house, and, refreshingly, it has nothing to do with the play of the Mets. Once you find your seat you can watch the next person take their turn, or maybe bend your gaze skyward as another plane heaves itself into the night.