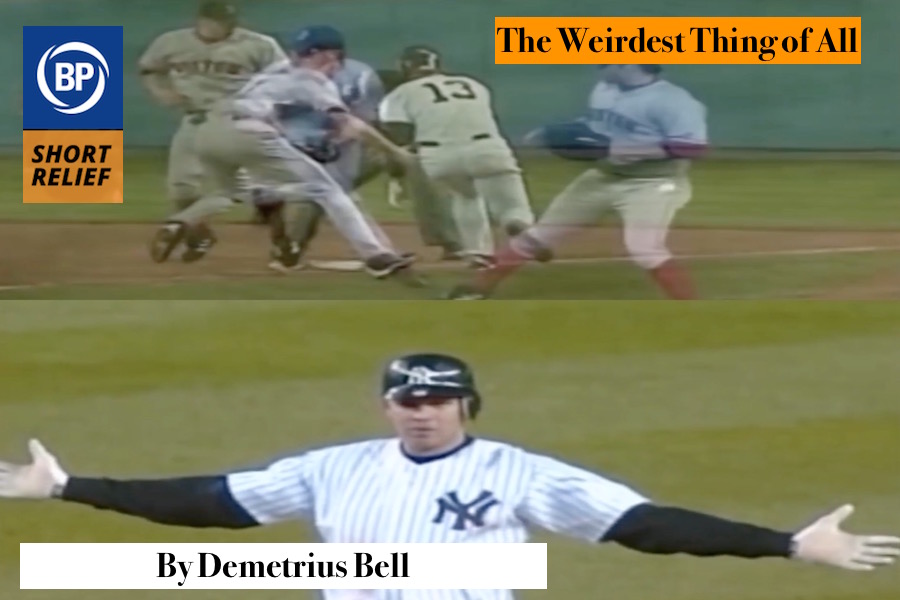 The postseason is only a cool fall breeze away from getting underway, and things are feeling a little nostalgic for me. The Braves have won their division again, the Cubs took a late-season back-breaking string of defeats to hurt themselves, the A’s are playing good baseball but not good enough to get over the top dog in their division, and the Yankees are going into the playoffs as the favorites in the American League. It’s just like old times! It almost makes me want to pull out my Nintendo 64 and play some Goldeneye again.

The part about the Yankees is what’s especially nostalgic. Even if I’m salty about them snatching two titles from the Braves during my formative years as a baseball fan in the 1990s, I had to admit that it always feels right to see the Yankees doing well and being a threat to win the World Series. I’ve never particularly liked it, but I also have to admit that it’s always weird whenever the Yankees aren’t a legitimate challenger for the title. I’m not talking about simply making the playoffs or having a winning season. I’m talking about them being in a position like they’re in right now, where they’ve won 100 or more games and are squaring up to make a deep run in the postseason.

The weirdest thing of all is that I have absolutely no feeling of ill will towards the Yankees. I used to be the fan who rooted for my favorite team first and anybody who was playing against the Bronx Bombers second. It only felt right, since they as a franchise had fully leaned in to the Evil Empire moniker and I as a fan had bought into them actually being evil. I took great joy in watching them blow that 3-0 lead to the Red Sox in 2004 and that moment when Alex Rodriguez slapped Bronson Arroyo’s glove in a fit of desperation was enough schadenfreude to last me through winter.

However, things have changed in recent times. I haven’t had any sort of animosity towards the Yankees in these past few seasons, and I’ve even found myself admiring them a bit. This season is especially the case, as they’ve fought off all sorts of injury problems to win the division and set themselves up as a formidable challenger to take the golden crown of baseball in October. Maybe it’s because I’m growing up, or maybe it’s because the new-age regionalism of baseball is making it so that our divisional rivals have taken the place of an Evil Empire in the eyes of many fans and I’m including myself in that. The point is that while I’m not going to be rooting for the Yankees to win it all once again, I wouldn’t really hate it. The 28th World Series championship for the Yanks wouldn’t be the end of the world, even if it would crush the kid version of me. 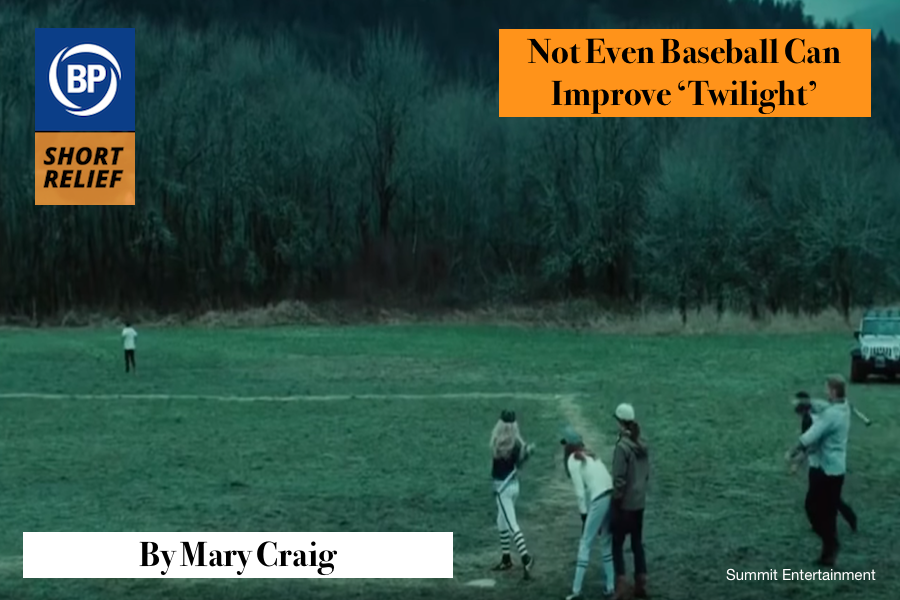 The absurdity of the Twilight films has been well-documented, perhaps by none better than Robert Pattinson himself. However, there is one scene in particular that warrants further analysis:

The absurdity of this scene increases tenfold with the knowledge that the actors had baseball training sessions in order to make it as accurate as possible. This means that the filmmakers looked at a scene in which a family of sparkly vampires play baseball solely during thunderstorms because they hit the ball so hard they need the sound of thunder to mask the sound of bat hitting ball and thought “we need to make this believable.” The problem, you see, is that Robert Pattinson is English and therefore had no prior experience with baseball. In this scene, R-Pattz chases through a forest after a ball, poorly mimes throwing throwing the ball home, and collides with Kellan Lutz in the air while attempting to field a ball. At no point did he display any actual need for training. He didn’t pitch or hit or *actually* field anything. So, I repeat, “training?????”

Furthermore, this training revelation also means that *multiple people* believed that this windup both looked cool and added realism to the scene: 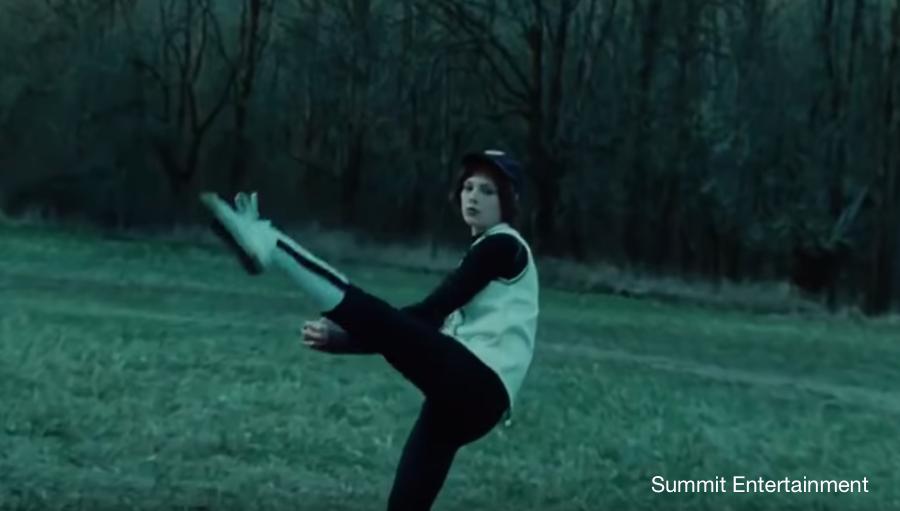 Look, whenever a story features the supernatural, it demands a certain suspension of disbelief from its audience. The ability to suspend disbelief, though, is greatly aided by one thing that Twilight lacks: internal consistency. The story has to adhere to certain principles and limitations placed on it by the universe in which it inhabits; in essence, it must make sense given the premises it establishes. In addition to being completely ridiculous by itself, this baseball scene doesn’t make sense in the world of Twilight. There’s no reason why these vampires would play baseball. There’s no reason why Alice is so much worse at pitching than literally everyone else is at hitting. If their vampire strength allows them to hit the ball a literal mile, why doesn’t hers allow her to throw it past them at 200 mph? The game is supposed to be a semi-regular occurrence, yet Bella has to be umpire because nobody else is impartial enough to do the job, leading one to ask, “How did they manage before she awkwardly mumbled her way onto the scene?”

It’s like the author thought about what might make these characters relatable and decided that dressing them in a hodgepodge of old-timey uniforms and sticking them in a field was a far easier means of achieving relatability than building things like character arcs and themes.

This scene as a whole, then, exhibits the failures of Twilight: it’s disjointed, unearned, and does nothing to progress plot or characterization. We’re supposed to be marvelling at the supernatural ability of these vampires in making an extremely difficult sport seem easy, but we’re instead gawking at the unintentional hilarity of it all. 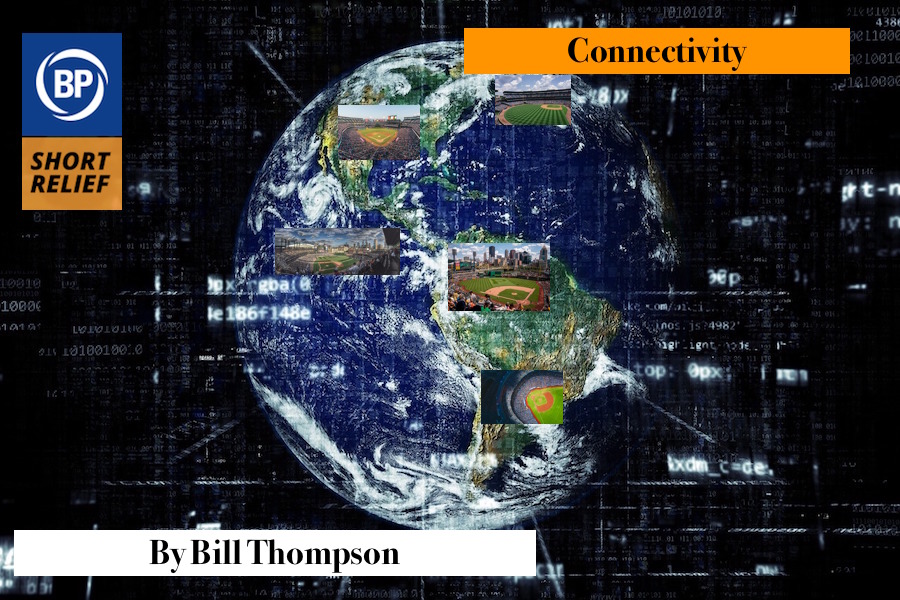 Those who are reading this article are probably Major League Baseball fans. You open your phone and right at your fingertips you find various resources for following the biggest league in the land. It may seem to you like the entire baseball world is at your fingertips, and it truly is, only you’ve decided to use your pinky finger and let the rest rot away. There is so much more baseball out there for you to consume, thanks in large part to the connectivity that the online world affords a baseball fan in the year 2019.

I never truly understood that level of connectivity until recently. My girlfriend and I were attending a Milwaukee Milkmen game, our local American Association team. At some point during the game, I found myself getting an update from MLB At Bat about the score of the Chicago Cubs game. At the same exact time, I was uploading a photo to my Twitter feed of my significant other wearing her brand new Utica Unicorns hat, a team from another unaffiliated league, the United Shore Professional Baseball League. I turned to tell her something and I noticed she was on Facebook messaging with a representative of Tigres del Chinandega. They are from Liga Nicaragüense de Beisbol Profesional. She was messaging them to see if they had any hats available for her to purchase. She had watched the Tigres lose in the finals of the 2018-2019 LBPN season, streaming live on YouTube.

I love Major League Baseball, no matter what my issues are with the league. Still, realizing that MLB isn’t all there is to the professional baseball landscape has been a godsend to my baseball fandom. That my fandom is as strong as it is today is thanks in large part to the connectivity that the online platform has brought to baseball this decade. A moment like the one my partner and I experienced seems like it should be a rarity, but I don’t think that’s true. Whether your medium of choice is Facebook, Twitter, Reddit or something else, the entire baseball world is but a click away. In the past few minutes alone I was talking to two people from opposite ends of the country about the unaffiliated Pecos League while surfing various stores looking for Liga Mexicana de Béisbol hats.

We live in a golden age for discussing and discovering baseball. If MLB is all that interests you, that’s great – just be welcoming to all the various MLB fans from faraway places who’d love to have a chat with you about your favorite team. If you only feel like spreading your wings to Minor League Baseball and college ball, there are fans and websites galore for you to explore and support that sort of growth. However, if you want the whole shebang, then the world’s your oyster. I’ve lost count of the number of amazing people I have met from countries I will never be able to visit, simply because we both love baseball. I can watch a game from Taiwan while wearing my Homestead Grays hat, my phone goes off with updates about the Cubs, and my girlfriend asks me when the next Bonn Capitals game is. Baseball is the great connector in my life, and if you’ve read this far, I’d wager the same is true for you.