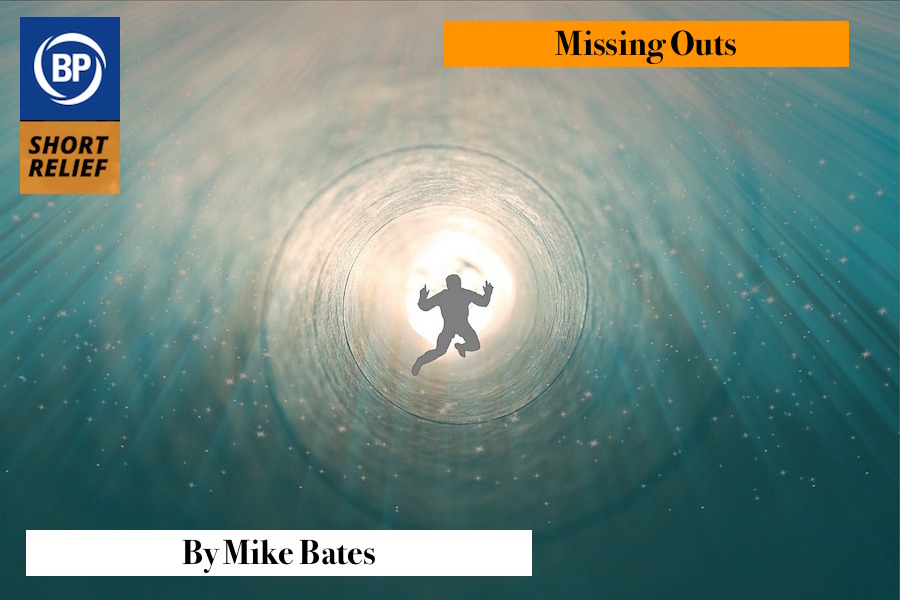 On Wednesday night, Zeus himself decreed that I would go without baseball this weekend, sending a mighty bolt down from Olympus to fry my modem, and those of several of my neighbors. The replacement arrives on Tuesday. I’m baseball-less until then, having long ago cut the cord binding me to cable television. This weekend aside, the decision has been totally worth it.

Baseball, I gather, has soldiered on without me. I’ve heard about it in whispers and rumors. The Twins won two from the Royals, while Cleveland lost one against Philadelphia. The Brewers have continued to win without their fallen MVP to claim a commanding lead in the NL Wild Card race. The Yankees, Astros, and Braves have all clinched their respective divisions. At home, keeping my kids from murdering each other, I have missed experiencing all of it.

It occurs to me that this is what death is. Major League Baseball is a perpetual motion machine that has operated since the 19th century and will keep operating until the great cataclysm, whatever it may be, drives our species to the brink. It has weathered the demises of millions of fans as more have risen to take their place.

I find that truly terrifying. The game has gone on. There are grandmothers buried in Brooklyn who have no idea that their beloved Dodgers have abandoned them. There are fathers sprinkled over a cliff into the Pacific who never learned that Hank Aaron caught the Babe. There are siblings lost too soon who never saw Ichiro take batting practice. This is awful.

It probably doesn’t matter much to them, their missing out on all of this. But it matters to me, as someone left behind and contemplating just how much I’m going to miss someday. I’ve seen Marvel’s Endgame. I’m likely going to live to see the end of the Star Wars. There will be many other things that will come and go in the, hopefully, decades I have left to trod this Earth whose finality I will experience, process, and internalize. But the thing I love best, beyond my actual loved ones, cannot be bargained with. It cannot be reasoned with. It doesn’t feel pity, or remorse, or fear. And it absolutely will not stop, ever, even after I’m dead. It is the unTerminator, in that it will not kill me (though the Twins bullpen does seem to be trying), but also in that I don’t matter much to it.

It just is. And, some day, I will not. I’d like to find that comforting. But mostly I am annoyed I won’t find out how good Mike Trout’s granddaughter will be in 2070. 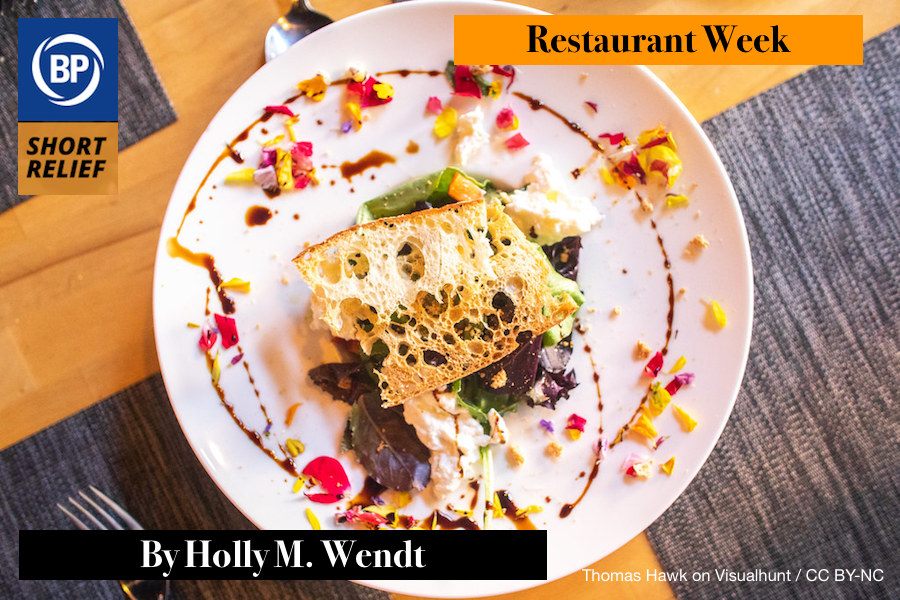 Restaurant Week is a magical chunk of days during which participating venues craft prix fixe menus to entice new diners through their doors, and the city of Harrisburg, Pennsylvania hosted one recently. The most common approach (at least in my area and experience) is a three-course event — appetizer, main, and dessert — for which there are two or three options to choose for each course. Some — especially for lunch events — stick to two courses, and some go as far as five, and it’s a delightful way to experience the kitchen’s range and the chef’s approach — philosophically, seasonally.

Or at least I think so. I love good food as much as I love baseball, and Friday night, I was particularly happy to be experiencing a delicious appetizer involving peaches and burrata while the Phillies were giving up runs in Cleveland on the television hanging over the bar. Starter Drew Smyly only lasted two innings against the opposition, and the Phillies used six pitchers across their eight-inning loss.

It’s September. A lot of games are like this, rife with pitching changes, substitutions. There are myriad reasons for it. For the teams assured of their playoff spots, it’s an effective way to save the best arms (and legs and backs and all the other appendages and muscle groups that hurt after a six-month season) for the postseason. For the ones who won’t have anywhere to be on October 1st, it’s part of the planning for next year. And for the teams who are still scrabbling, in hope and perhaps delusion, across the final days of the season, it’s more like desperation: will this work? Will this? Please work. Please hit. Throw strikes. Keep us alive.

I should enjoy this line-up dabbling, this inning-here, at bat-there smorgasboard of Triple-A players and waiver-wire pick-ups. I really should, shouldn’t I? There is nothing I like more than small tastes of things: beer flights, tapas, tasting menus. If I could only muster the right magical thinking, could I not find a way to think of the late innings thus? Consider this two-thirds of an inning or this pinch-hit a treat, an offering, an unexpected change from the regular menu, rather than a resignation. Perhaps I might be surprised. 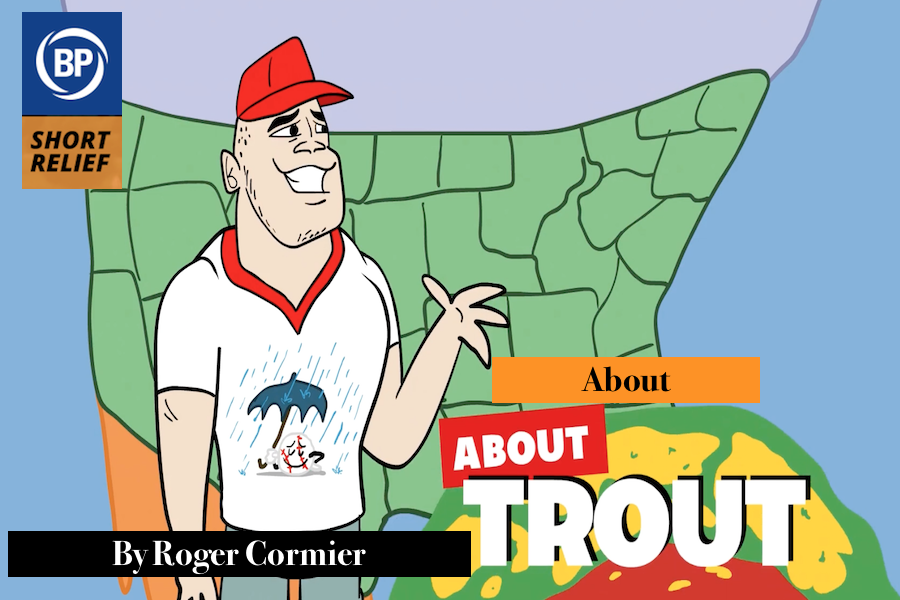 Mike Trout stars in his own cartoon. This is news to possibly all of you. Am I privy to its existence because I am some sort of bigshot? No, I was awake at 1:30 in the morning when one of my MLB.TV screens abruptly displayed the 29th most famous New Jersey native as an uncharacteristically animated (sorry) version of himself.

The advertisement caught my attention, and apparently nobody else’s. The four episodes on Fox Sports West’s YouTube channel average a view count of about 515. The first installment was uploaded on July 31st, and as of this writing has been seen 366 times, and I am responsible for probably 10 of those. How is that possible with a synopsis like this:

Mike Trout tells the story of his greatest fishing trip ever in – which ended with him catching a 500-lb goliath grouper!

Oh hey question answered. The next two episodes are about the time Mike Trout went to the Super Bowl and saw his beloved Eagles win it all and when he got some quality time with childhood hero Derek Jeter .The fourth is about Mike’s love of weather. Even fewer people have seen what might be the series finale than the mighty tale of the bigass fish. 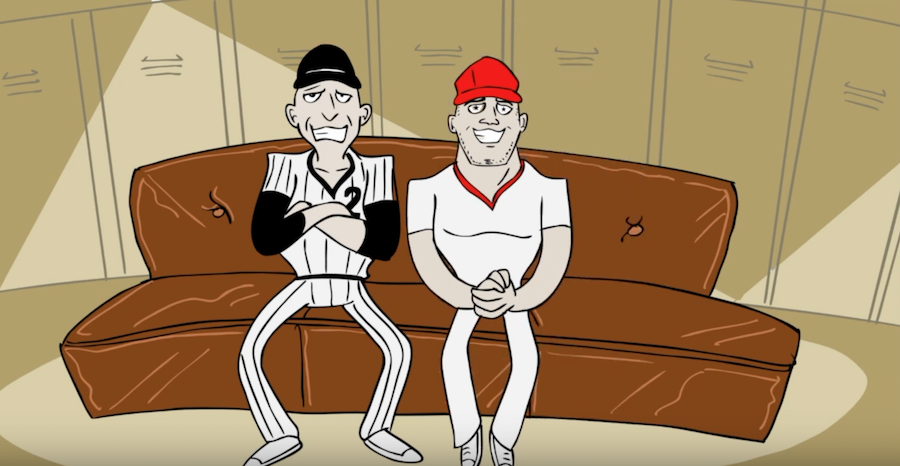 This was the depiction of the Trout family incorrectly guessing the weather. It’s cute. 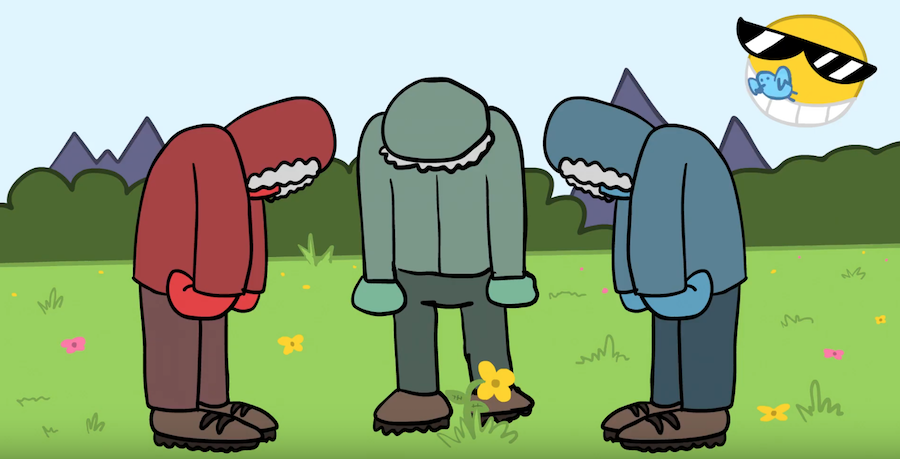 Also from the weather episode: this thing. It is a lot. All I’ll say is it’s telling Mike is the guest vocalist, not the lead, on his own show. 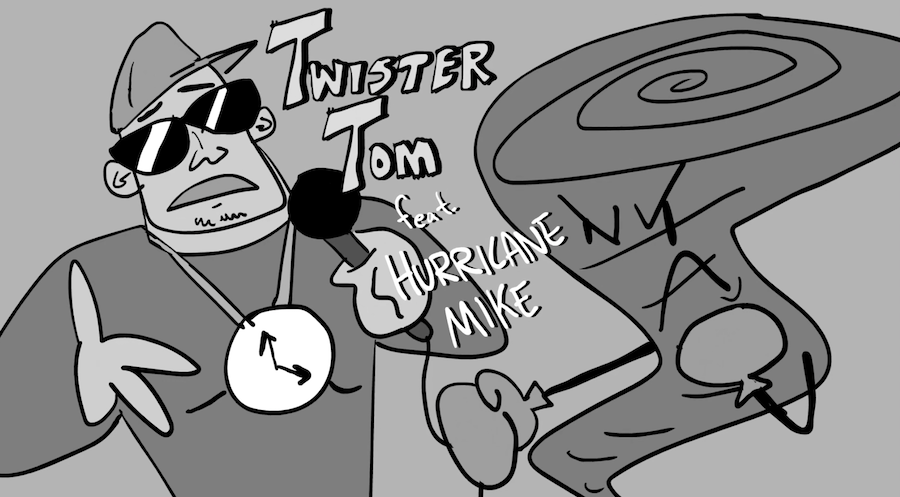 About Trout is easily fixable. Just make the stories up.

Mike Trout tells the story of the time he saved a New England town by defeating a killer great white shark using his knowledge of ocean currents and communicating with his brother, a rainbow trout with an irreverent in-your-face attitude poorly masking a heart of gold. Guest starringShohei Ohtani.

Mike Trout beats the New England Patriots all by himself to win the Super Bowl. Blindfolded. On two hours of sleep. The hotel coffee was subpar, at best.

Mike Trout travels back in time to get himself drafted by the New York Yankees. After seven consecutive titles, the world’s population greatly decreases because of constant earthquakes caused by Trout messing with the space-time continuum (not like the book version of 11/22/63 at all). Mike returns to our present and destroys the machine, because he’s a good guy like that.

Mike Trout becomes a network meteorologist. His predictions are so accurate he is abducted by both the Russians and the North Koreans, who decided to work together on this one. Trout escapes their clutches and brokers world peace. He is then abducted by other weather reporters. He escapes, but his colleagues still hate his guts, each other, and themselves. Will they finally take Mike down someday? Stay tuned.