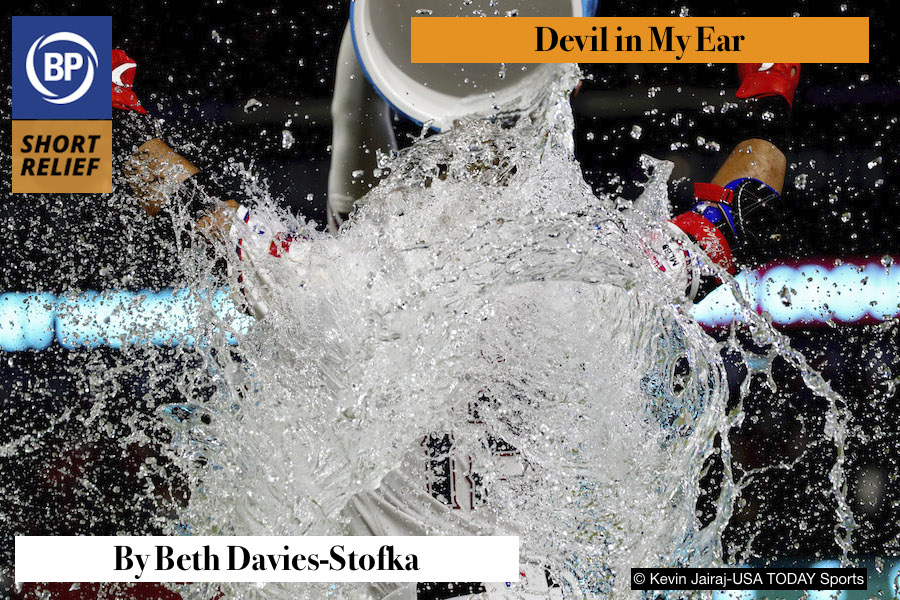 I’ve watched the tape.
Reviewed what I did.
Relived how I whiffed.
Lost the game, God forbid.

Next time it finds me, the game’s final out,
I adjust what I can, I smother my doubt.
I crouch way down low and I ready my bat,
The helmet slips and I push it back,
I’ve thought every part of this through in advance,
And I’m ready now.
For my second chance.

But Old Nick the razzer, he yells like a brat,

YOU’RE GOING TO NEED A MUCH BIGGER BAT.

That old prat.
That pestilent rat.

The poisonous heckler
Of the middle mezzanine
The enemy, the accuser, the whispering fiend.
He wants in my head but I can’t let him in,
I’m planning to give us a walk-off, and win.

I triple my focus, the devil can’t play.
Last time, I struck out, but not today.
I blew it before, I won’t do that again.
So I hit that ball hard. And got my revenge.

My career redefined,
The stars realigned.
My teammates are dancing,
The fans feeling fine.
“This round goes to me.”
Devil takes it in stride. 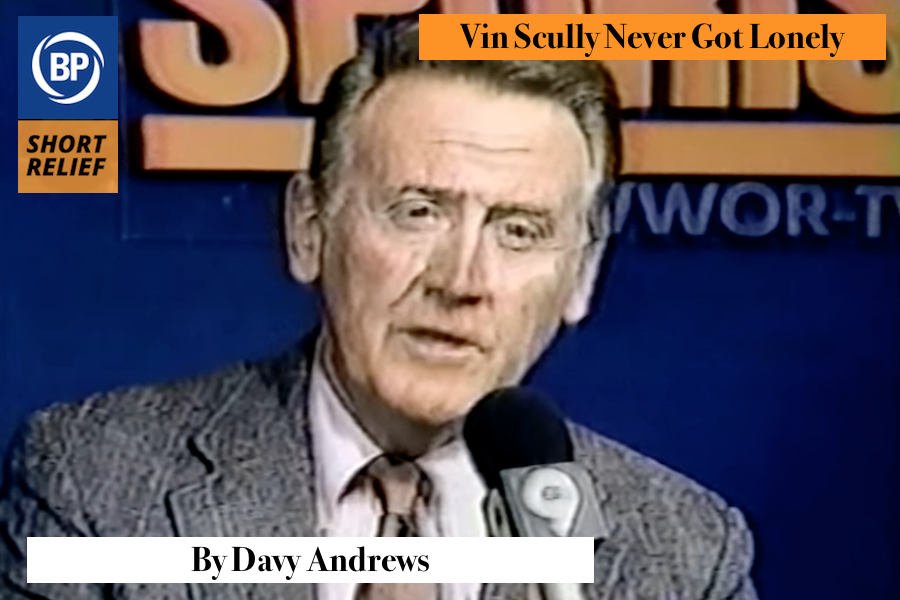 I used to wonder if Vin Scully ever got lonely, way up in a broadcast booth, talking about baseball with no one.

Dodger fans never shared my concern. To them, I imagine, having another person around would have been sacrilege. If you grew up accustomed to the dignified silences and occasional utterances of Vincent Edward Scully, the Mets’ three-man booth probably makes you cover your ears like a dad at a punk rock show.

Major League Baseball is the rare multibillion dollar monolith that comes across as provincial. We grow up listening to our local announcers, and in turn those local announcers teach us what baseball sounds like. And it sounds, well, local. Unpolished. Artisan. Partisan. The announcers wear ugly polo shirts and refer to players by first names and complain about how their scorebook is a mess on account of all these double switches.

Every football game is basically a national broadcast. Once a week you hear Joe Buck and Jim Nantz and Al Michaels. Guys in suits. Guys who own multiple suits. Then they pack those suits and head off for next week’s big game. Rarely will you hear a jingle for Esskay hot dogs or a mumbled commercial from the National Air Traffic Controllers Association.

Your local broadcast team is with you every night. You learn whether they prefer the phrase, “he winds and delivers,” or, “the kick and the pitch.” You notice Keith Hernandez’s alarmingly thorough knowledge of the music of Frank Zappa. You hear a solid half inning of Godfather quotes, like the one Tim McCarver unintentionally triggered while the Cardinals dismantled the Pirates this Saturday.

My sister used to tape Orioles games off WBAL so that she could still fall asleep to them during the winter. For us, what baseball sounds like is Jon Miller, voice down a full octave for a play at the plate, booming, “Safe!” When Peter Angelos let Miller go in 1996 the Baltimore Sun reported that Angelos had, “made summer into just another season.” I was distraught when Sunday Night Baseball replaced him and Joe Morgan in 2011, leaving no Jon Miller in my life whatsoever. That’s right, I enjoyed listening to a Joe Morgan broadcast. Come at me, internet.

Today you’re a click away from learning what baseball sounds like in Seattle, or Cincinnati, or in Los Angeles in Spanish. My sister and her husband, 18 miles from Angel Stadium, are in a life and death struggle over whether their kids grow up rooting for the Cubs or Nationals. It’s hard to blame them. They can turn on an Angels game or a Dodgers game any time, but they want to hear what baseball sounds like. 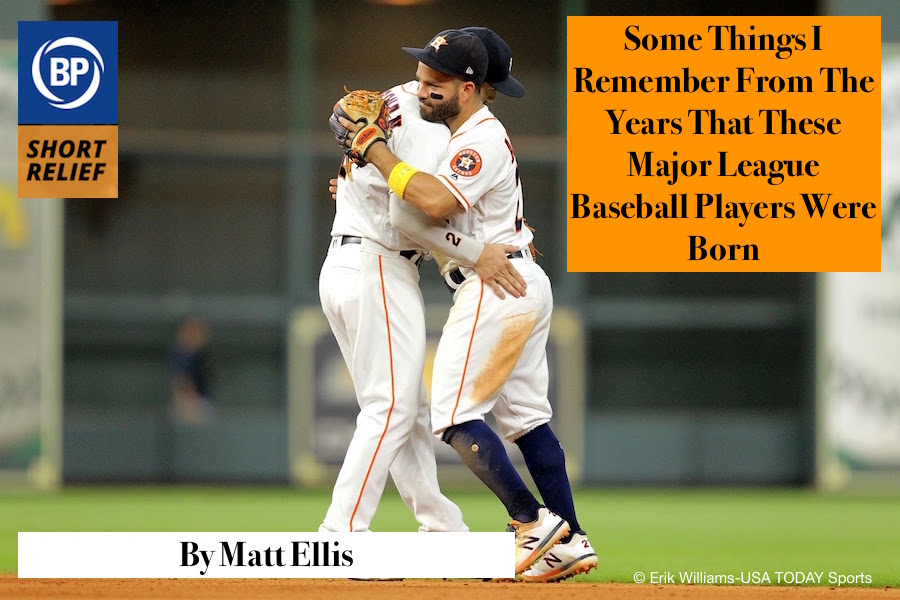 Last week was the beginning of the new semester, and if you’re like me — a thirty-something graduate student caught precisely in between the innocent young freshman wearing their acid wash denim and listening to “post-malones” and the tenured Gen-X prof who is your boss, it’s a bizarre and uncomfortable realization that you are both old and young; a nomad wandering in between each group and living out only the worst aspects of each: a bank account and credit score of a 19 year old, a 32-year old metabolism, a forty-something aversion to the snapchats and side-conversations you assume must be about you (you loser).

Then I realized that soon I’ll be of an age where there are like, maybe, six baseball players older than me. That was a Bad Thought. I looked up the birth years of some of these people — who have signed million-dollar bonuses and can deadlift six times my body weight while I hurt my knee plugging in my computer speaker yesterday — and decided to say to hell with it and look back on my years like an inverse Cassandra, warning all that the crisis isn’t up ahead but is that we were born in the first place. I not only am older than these people, I vividly remember things that happened before, and incidentally, at the moments of their birth.

Jackie Bradley Jr., April 19, 1990: I was sitting on the edge of my parents’ waterbed in their Rock Creek suburb outside Portland watching the NBA Finals between the Trail Blazers and the Detroit Pistons. I wasn’t old enough yet to tell the men in matching black jerseys apart, but I do remember hearing my mom told me we had to root for someone named “Clyde,” because the city had never had a hero like that before and as I would come to find out, it wouldn’t again until the early 2010s or so. I remember vaguely liking that the Pistons had the colors blue and red while the Blazers looked like an exploded pen, but later I took out $2000 in credit card debt to get season tickets to Damian Lillard’s rookie season, so I guess the whole thing left some mark on me one way or the other.

Alex Bregman, March 30, 1994: When I was in daycare there was this girl named Tiffany who used to wear her hair permed in a side-ponytail scrunchie who told me that when *I* was seven I’d be as smart as she was. I was seven in 1994 and I don’t remember what happened to Tiffany but I do remember my friend Nate taught me the word ‘sh*t’ and we all got in trouble later that day despite the fact that I didn’t say it with my own mouth. I think about that a lot sometimes, and think about my mom’s disappointment and wonder if Freud was right that there is actually a primal scene of some sort.

Ronald Acuña, Jr., Dec 18, 1997: I was new to my neighborhood across the river in Washington State and I remember there was this weird kid named Richard who used to like to catch grasshoppers and do messed up crap like tear their wings off and use magnifying glasses with the sun on them. I wonder what happened to that guy. I mean, don’t get me wrong: I had trouble paying all my bills last month and I really need to lose about ten pounds of beer weight but Richard, Richard probably did some incredibly insane things in the years since I last saw him. Anyway, Ronald Acuña, Jr. has 64 home runs to his and joined the major leagues last week.

Vladimir Guerrero, Jr., Mar 16, 1999: Jason Keene came over to my house for New Years and we watched the Sci Fi channel’s Twilight Zone marathon to kick in the new millennium. I remember wondering if my parents’ new milk-cow-print-adorned Gateway personal computer was going to explode at midnight because the news was always talking about this Y2K thing, but then nothing happened, and we ended up watching what is, I think, the greatest episode of the series, ever, The Obsolete Man: Rod Serling’s angry screed against totalitarianism and epistemological structures which limit what is thinkable in moments of crisis. I think about that episode when I watch the news these days, our world crumbling into pieces, and sometimes I think about that night in 1999, and my friend Jason, but I never think about the fact that Vladimir Guerrero, Jr. weighs almost two of me and in a healthy way, will end up making more money than my dad, and his dad, and his dad, and his dad, and his dad combined, and that it is actually just and right. I think it’s now time to go to bed.