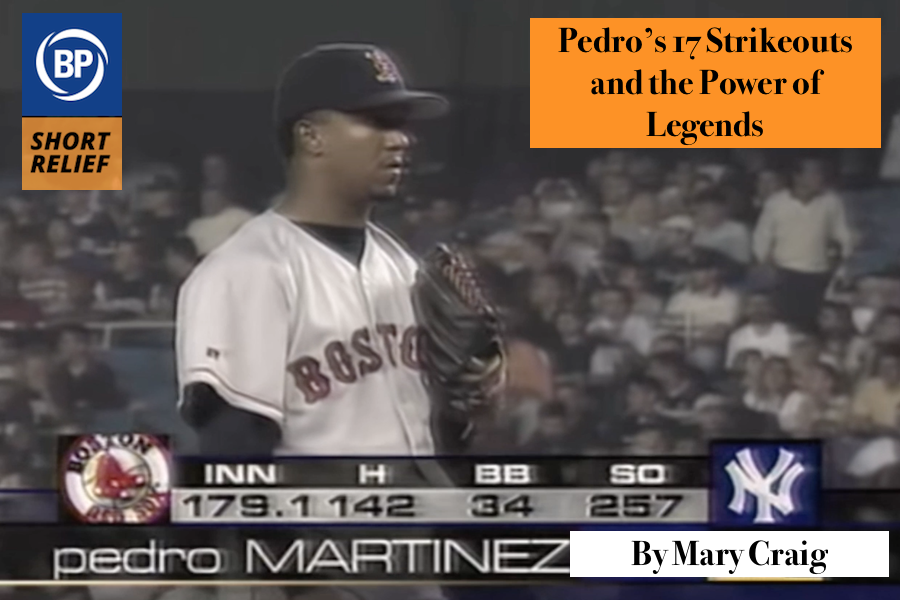 Today is the 20th anniversary of Pedro Martínez striking out 17 Yankees in a one-hitter in which he faced 28 batters. This performance was the crown jewel in one of the best seasons by a pitcher in baseball history. Pedro himself said of the game, “’This is as good as it gets, I won’t lie,” and he certainly wasn’t lying.

I was only 7 years old at the time of the game, and so my appreciation of it––and Pedro––came to me piecemeal over the years. At first, I only knew it through my dad’s reaction to the game, part-joyous and part-awestruck. It wasn’t hard to understand that something special had taken place, but the specifics were entirely out of reach for me.

As I grew older and became a more active baseball fan, I encountered Pedro’s performance in much the same way one encounters a legend. Although Pedro was very much still a member of the Red Sox, this game was spoken of as though it belonged to a different time, or perhaps a different world altogether. The events as they were told were true, but the storytellers always spoke as though this story was too grand, too operatic to actually exist. And for many years, I kept myself at arms length of it all, believing it best left in the realm of legend.

But then Pedro grew older and left the Red Sox and then professional baseball shortly after, and I grew older and started watching more baseball games. Within years, I had seen a number of strikeout compilation videos and knew enough about the game and Pedro to make sense of them. I knew I was watching a feat that had seldom been matched, performed by one of the greatest pitchers in the sport’s vast history.

The wondrousness of these highlights prompted me eventually to watch a full recording of the game, drawing toward me what I once was determined to keep at arm’s length. Contrary to my initial fear of destroying the mystique of the performance, it only grew. I now knew enough to appreciate it fully, to recognize the beauty reserved solely for the best artists’ best work.

Rather than bring an end to the legend, I was now in a position to contribute to it. In understanding the basis for the legend, I came to recognize the power truth possesses when it takes the form of a story. And the truth here is that Pedro’s performance is unparalleled. 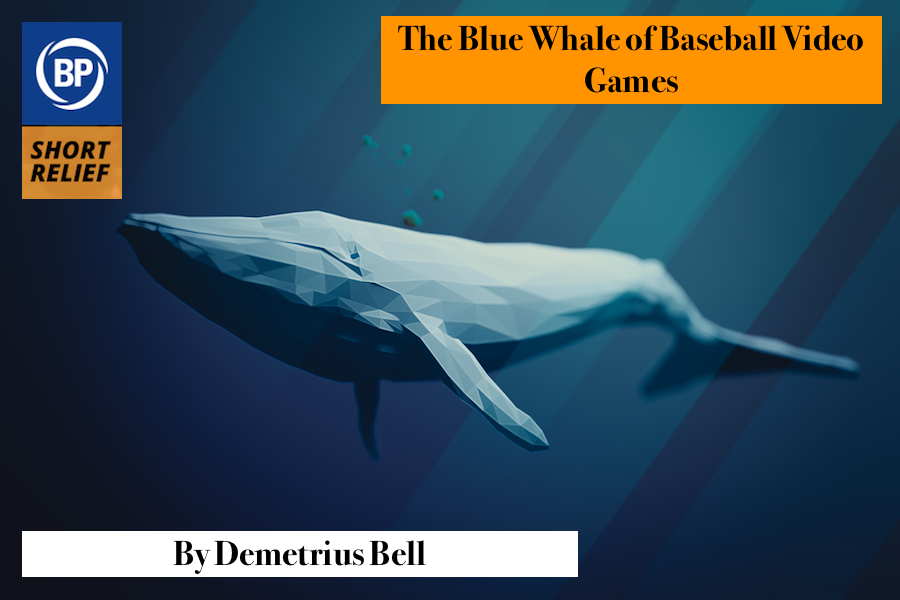 I want you to take a deep breath, close your eyes, relax, and imagine that you’re back in the year 2005. If you’re my age and played video games, then you just got home from school after a long day of doing arduous high school work and now you want to kill some time by playing some video games. If you’re a sports fan, you had the choice of popping in such games as MVP Baseball 2005 and the ‘06 line of Madden, FIFA, NHL and NBA Live from EA Sports. Even if you weren’t a fan of EA, you could see what the other publishers had to offer for that sport. So if you were blind and didn’t accept MVP Baseball into your heart, you could choose to play 2K Sports’ baseball offering or the Sony published MLB series.

Are you enjoying your time in the past? Unfortunately, I’m going to have to bring you with me here to the future. If you used your memories to aid yourself in your time travel journey, then you already know that the when you booted up any of the aforementioned sports games for the final time that year, you were closing the curtain on the peak of sports games. Fourteen years after what was arguably the golden age for sports games, we’re now in the dark ages. There’s only one football game to choose from and videos of glitches from each edition of Madden have become an annual tradition at this point. FIFA had a long run of good games but their ‘19 edition showed glaring signs of decline. NBA Live is barely relevant as a game, and while 2K can still put out a good basketball simulation, it’s clear that they’re trying to turn it into a casino simulator with a little bit of hoops here and there.

Where does this put baseball? Well, video game baseball is actually in a very good place. Sony is now publishing the MLB: The Show series and the game has truly hit its stride. It’s quite obviously the premier baseball video game out there, and you could make an argument that it’s up there with the old MVP Baseball series as being the best of all-time. However, did you notice that I said that Sony was the company publishing the game? That means that if you don’t own a Playstation 4 but you want to play baseball, you’re stuck with RBI Baseball. There is no comparison between them. MLB: The Show is a blue whale and RBI Baseball is krill.

I haven’t even gotten into NCAA Football being out of the picture, or the various pratfalls that have turned this corner of the gaming industry into a cash grab more than a haven for sports fans to live out their dreams. It’s a real shame, because I could have never imagined that a genre that was seemingly headed for such amazing heights could take such a precipitous fall from 2005 until now. 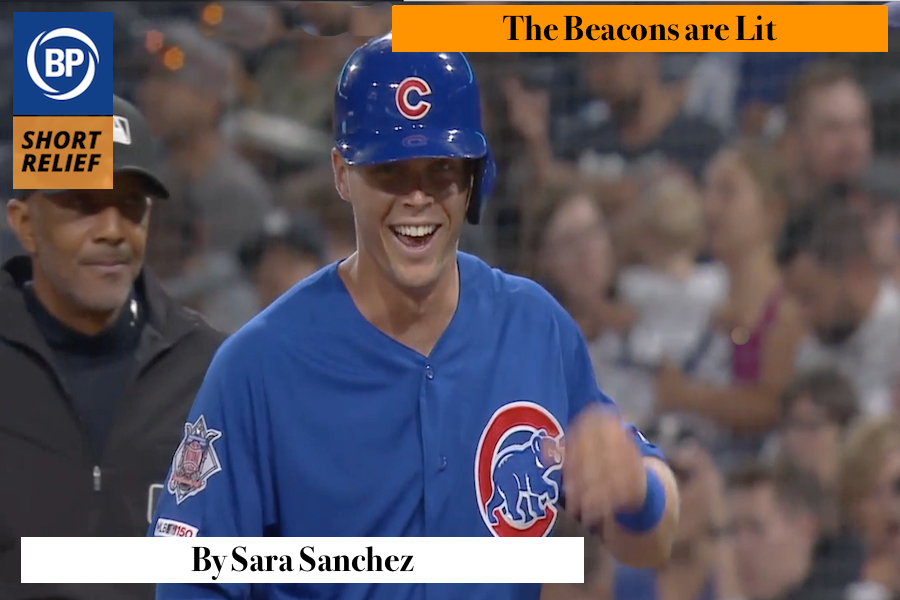 I had never been more excited for a movie than I was for the Lord of the Rings trilogy. The story of Frodo and the Ring of Power was one I read repeatedly growing up. Between the announcement of the movies and their premieres I read the books a few more times, you know, just in case I’d forgotten anything the first dozen or so passes. I was in line hours in advance for the midnight showings, like you had to be in the days before seat reservations and recliners at movie theatres.

My favorite scene from any of the three movies always chokes me up. It’s not a battle, a death scene, or a sad goodbye. It’s all about hope. Without fail, when the beacons are lit during The Return of the King there are tears in my eyes. There is something about the pyres being lit across Middle Earth that will never get old. It doesn’t matter how many times I watch the movies (and trust me, I’ve watched them at least as many times as I’ve read the books) the signal of a chance to fight back against impossible odds gets me every time.

It’s part of what keeps me coming back to sports. After all, my favorite baseball team is the Chicago Cubs. My American League team is the Boston Red Sox. I’ve been alive long enough to live through team after team built on hopes that shattered as they neared the final frame.

I certainly breathe easier now that the curses are both gone and it’s truly a golden age to love these two teams. Let’s be clear, 2019 was already shaping up as one of the years of shattered hopes long before the past week, but the past 72 hours alone the hits were fast and furious. The Yankees officially eliminated the Red Sox from the division race and unofficially ended their playoff hopes. Javy Báez was diagnosed with a hairline fractured thumb, and his replacement Addison Russell’s nose was fractured by a 94 mph fastball and placed under concussion protocol. It seemed like the Red Sox were done, the Cubs were close, and, oh yeah, as I sat up late on Sunday night Twitter informed me Dave Dombrowski had been fired.

And then, the Cubs lit the beacons. They called up their top prospect and 2018 first round draft pick, Nico Hoerner. Hoerner has 469 total plate appearances in the minors. In an age where service time, tanking and playing for next year seem to dominate the league, the Cubs decided they weren’t quite ready to give up just yet.

I have no idea what to expect from Hoerner as he makes his major league debut at shortstop batting sixth late last night in San Diego (3 for 5 with a triple and 4 RBI. Not bad I guess. – Ed.), but I love that when Jason McLeod called him to tell him he was heading to the show he didn’t freak out. He just replied “Let’s do this.”

Let’s do this, Nico. Hope is kindled.