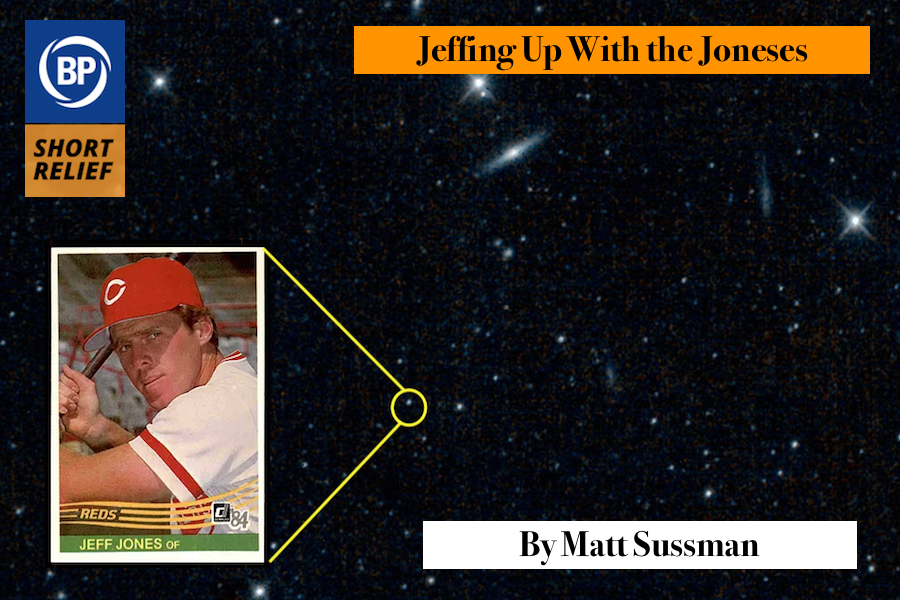 Everyone is giddy with anticipation for Aristides Aquino to catch Jeff Jones pic.twitter.com/dj5jzVEYd3

Sip this one lightly. In this moment, you can suddenly reminisce about Adam Dunn and how you’d wonder if he’s content with the current three true outcome panopticon he helped create. You think back to the Big Red Machine, with Bench and Foster hammering crooked numbers onto the scoreboard. You remember Greg Vaughn was briefly a thing.

Bizarrely great minor league seasons are baseball’s blind bags. They’re easy to find but good ones are happened upon, especially when they predate the NES. Jones’ 1982 season with the Single-A Cedar Rapids Kernels is definitely one of them: 42 home runs, 91 walks, a 1.088 OPS and 22 stolen bases thrown in for funsies. Context, of course, matters: he was 24 and playing in Single-A for the third year, basically mentoring 19-year-old Paul O’Neill and 20-year-old Eric Davis.

Cedar Rapids was a stone’s throw from where Jones played college at the University of Iowa, so this was very much a homecoming. As he told it later, he finally relaxed once he realized he probably was no longer a Reds prospect. Because of course this is how baseball goes, he ultimately became the Reds right fielder on Opening Day of 1983. His MLB career (unbeknownst to him) ended later that April in a demotion.

There are several takeaways here. Perhaps it’s that every minor league stat line has an interesting story behind it if you bother to look it up. Maybe it’s that you should be yourself. But I think the real takeaway here is that this Jeff Jones is different than the Jeff Jones that pitched for the Oakland A’s during the same early ‘80s and later became the Detroit Tigers pitching coach during their winning years. The real lesson here is that there are an infinite number of universes each with an infinite number of Jeff Jones and we’re never going to keep them all straight.

None of this has much to do with Aristides Aquino, who came out of nowhere to tie Jones’ mark tonight, and whose name is also alliterative. We’ll consider him part of the multiverse. 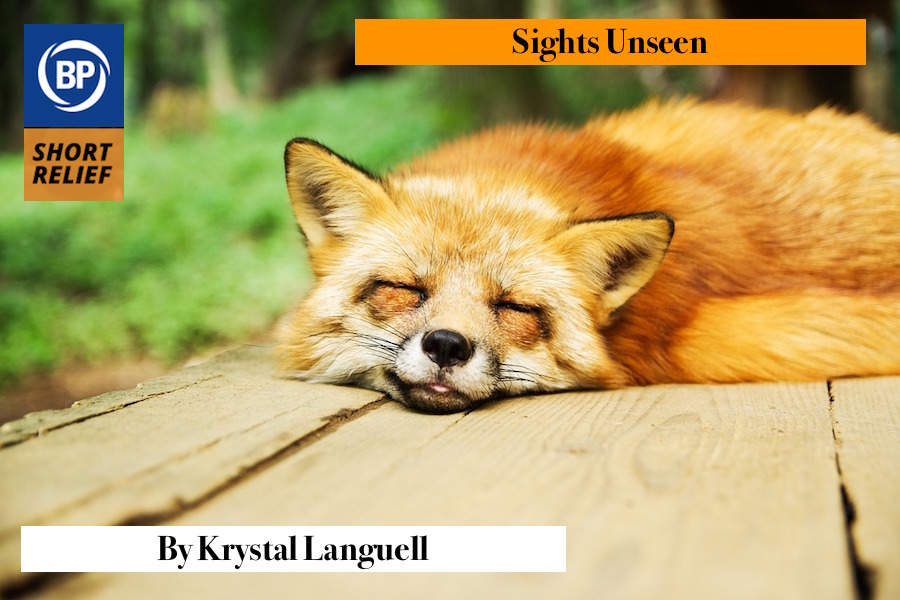 How about a game you can take a full-length nap
in the middle of and come back to find a reversal of fortunes
Romeo and Juliet caliber dramatic irony or horror movie
Kind of the opposite of that with only a bullpen offstage
Highly improbable, I didn’t want to believe it

The suspension necessary to have an imagination
makes your muscles stronger for the next time
Talking about practice is a pretty popular idea
You can’t believe that, though, or shouldn’t
What fresh con artist is this anyway?

Here comes the player of the game
taller than a tall man, he hits it a ton
It happens so fast online anymore
A little sleight of hand, a couple jokes
I’m just a spectator after all

Some nights the best part is the fact of an ending
That the game ends and we know officially how
Another fantastical notion, to know a thing
Oh ye of little faith, come and sit beside me
to compare sports cliches til we become expert 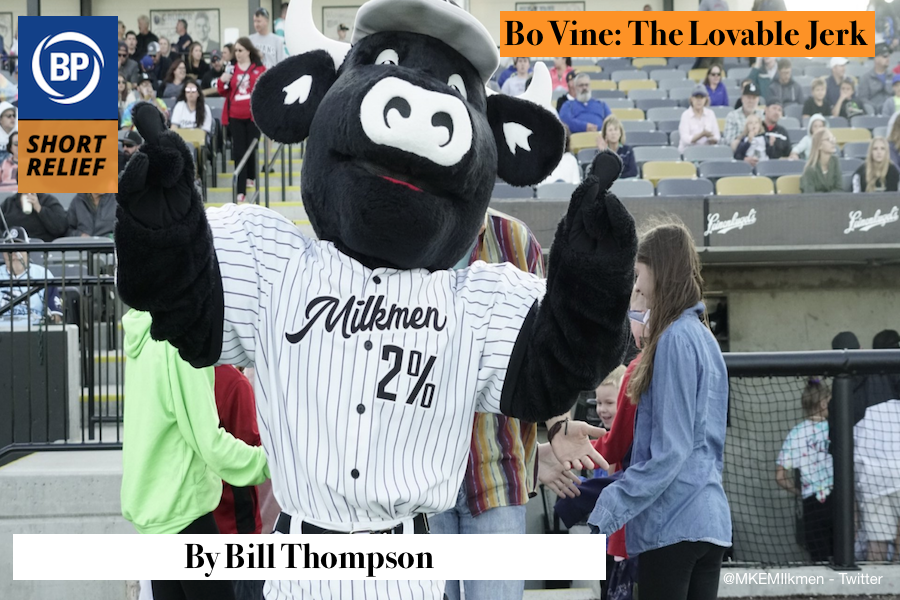 There are mascots in the world of sports that we all know and love. However, there are only a handful of mascots who fans love because of their willingness to occasionally be the bad guy. In baseball, we have Orbit and the Phillie Phanatic as the so-bad-they-are-awesome type. The National Hockey League and the Philadelphia Flyers can lay claim to Gritty all they want, but it’s clear as day that he belongs to everyone. In Milwaukee we have Bo Vine, a new addition to the mascot ranks, but a very welcome one.

I’m not here to tell you that the mascot of a first-year unaffiliated baseball team, the Milwaukee Milkmen, is on the same level as Gritty or the Phanatic. I am here to tell you that I don’t care about that argument because that is way too serious for the story I’m telling. Bo Vine may be new, he may only be a dairy-related tie-in, but he’s also a jerk of the highest order, and fans love him for that very reason.

The first time I experienced Bo Vine was at the Milkmen’s season opener. They have a race where it’s Bo Vine against two people in bubble-like cow costumes and two people wearing half-cow trousers. It seemed like the race was a typical between-innings filler until the announcer shouted go and the large galoot proceeded to shove one of the bubble cow people to the ground. He then sprinted full speed to catch up to a half-cow trouser wearing boy who looked no older than 16. When I tell you that Bo Vine extended his arm and clotheslined this kid in the back of the head so hard that he planted into the ground I am saying this with the utmost reverence. In the span of 30 seconds, Bo Vine had gone from a dopey mascot to an absolute killer who would win his signature race at any cost.

Subsequent trips to Routine Field have revealed a consistent pattern when it comes to how the bull wearing the 2% jersey interacts with the fans. He wanders the field, high fives everyone he sees, bangs his oversized head on numerous obstructions, and in general plays the role of jovial mascot. This takes place all game long save for that brief period when the bubble cow costume and the half-cow trousers make their appearance. A switch goes off in this half-cow half-man demon and he becomes all business. I have yet to see a race where he didn’t throw someone to the ground or clothesline an unexpecting participant. The last game I went to he grabbed a kid by the collar and flung him onto his back, leaving the kid in the dust. He then checked a woman in a bubble costume into the railing of the dugout. Needless to say, Bo Vine won the race handily.

(I should point out that none of Bo Vine’s victims seemed legitimately hurt, and took their losses in stride.)

Bo Vine always wins his race. He’s willing to roughhouse to do it, and when he simply leads from start to finish you can be sure he will turn around at some point and taunt the other racers as he runs through the finish line backward. Currently, Milkmen fans are the only people exposed to the transparent ruthlessness of their mascot, and we are proud that he is all ours. Bo Vine will shake your hand and kiss your baby, but you step foot on that field to race against him and Bo Vine knows you are merely an obstacle to victory.