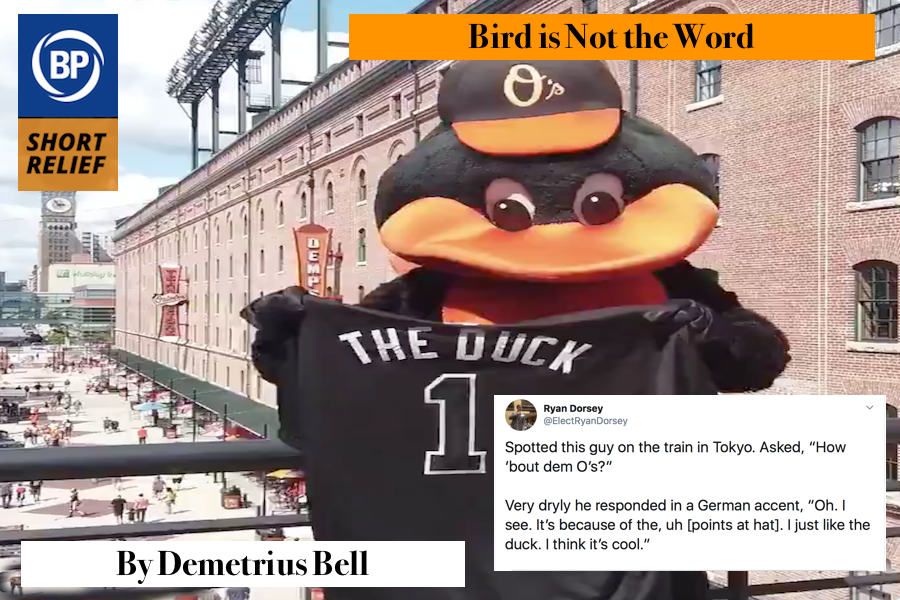 While the all-black and all-white uniforms for Players’ Weekend may have been a bit of a dud, they still had the cool element of the nicknames being on the back of the jersey. It was extremely difficult to make out the lettering and numbering on the white jerseys but on the flipside, it actually wasn’t too much of a problem on the black jerseys.

That ended up working out for the best, since the Orioles were in black and the most important nickname was being worn by The Oriole Bird mascot. If you’re blissfully unaware of what’s going on here, then you should just know that not everybody identifies the famed Cartoon Bird logo as an Oriole. In fact, if you ask someone overseas on public transportation what they think the bird is, chances are they will tell you that it’s a duck.

So, I decided to do some research of my own. I figured that if I was going to get a definitive identification of this orange-and-black bird, I was going to ask the smartest people I know: My two nephews. One is six and the other is four, and every time I’m with them they never fail to amaze me with whatever gem they bestow upon me on that particular day. If anybody could lay down the law and end the debate as to what the bird looks like, they would. So I made it plain and simple: Guess what this bird is.

There you have it. It’s either an eagle or a penguin. Definitely not an oriole. Just for fun, I decided to ask them about the other birds in baseball: the Blue Jays and the Cardinals.

It turns out that they treated this like a guessing game and wanted to know who “won” the game because although they’re young, they are the most competitive children I have ever encountered. I gave them each one point since you really can’t argue that a Blue Jay isn’t a blue bird and a Cardinal isn’t a red bird. I had to put my foot down and give them no points for the Oriole answer which meant that the game ended in a tie. However, I respected their opinion and they respected my judgment. This is how society should function.

With that being said, I now understand why the dude on the other side of the planet thought the Oriole was a duck. The experts thought it was either a penguin or even an eagle. The Cartoon Bird may be a legendary bird in the eyes of baseball fans but in the eyes of regular people like my nephews, it’s anything that you want it to be. 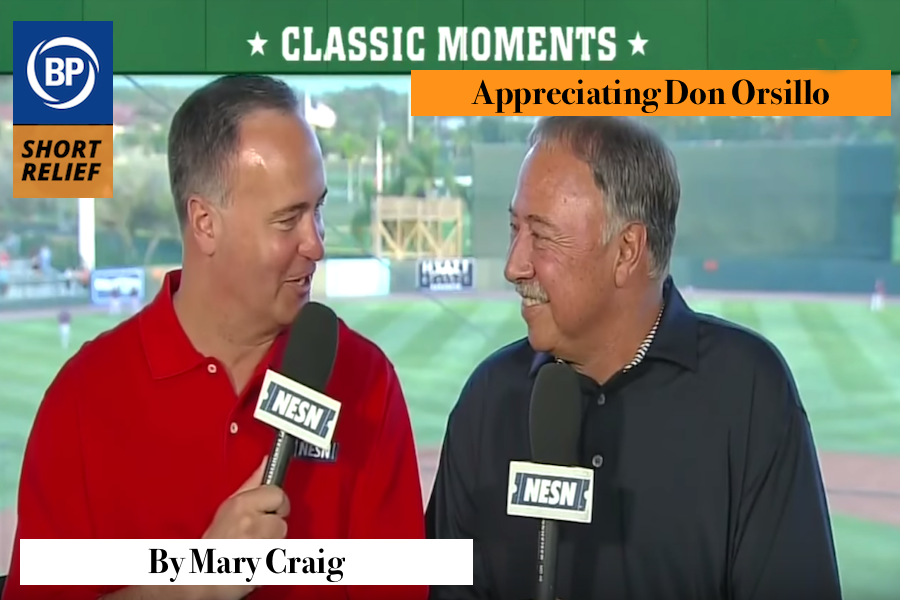 Announcing baseball games is incredibly difficult, made even more so by the fact that the game’s languid pace and reliance on narrative place great emphasis on announcers. It’s up to announcers to know when to fill silence and when to leave it be, when to abandon on-field events for storytelling and when to heighten in-game situations. Particularly grating announcers can lessen the excitement of nail biters, while the most skilled make miserable blowouts must-see events.

For many years, Red Sox fans had the best of the best in Don Orsillo. His knowledge and personality were enhanced by the joy of calling games for his favorite team, forming a triumvirate of sheer perfection. In his time with NESN, he became the heart and soul of the fanbase, navigating us through the miserable, turbulent Bobby Valentine era and celebrating alongside us the triumphs of the championship teams. Nothing complemented those late summer nights quite like the sound of his breathless giggle following a Jerry Remy mispronunciation. In his 14 years with the team, his voice became a source of comfort, his “Welcome to Red Sox Baseball” introduction the familiar greeting of an old friend.

His departure from NESN sparked a bitterness on behalf of the fans toward the network, one which becomes exacerbated every time the Red Sox play the Padres, as they did this past weekend. Nestled within this bitterness, though, is a sense of peace in knowing that our beloved Announcer Boy has found a new home with new fans who have come to love him. These series also afford us opportunities to reflect on his time with the Sox and remember all its many highlights.

For instance, there was the time when he admitted to not knowing how to operate his car’s windshield wipers:

And the time he finally got the desk lamp he had coveted since seeing them in the Rangers’ booth:

And, of course, there’s “this used to be a family show”:

Finally, who could ever forget the pizzer:

There remain plenty of reasons to be resentful toward NESN, but there are plenty more reasons to be thankful for the fact that we got to take this journey with him in the first place. 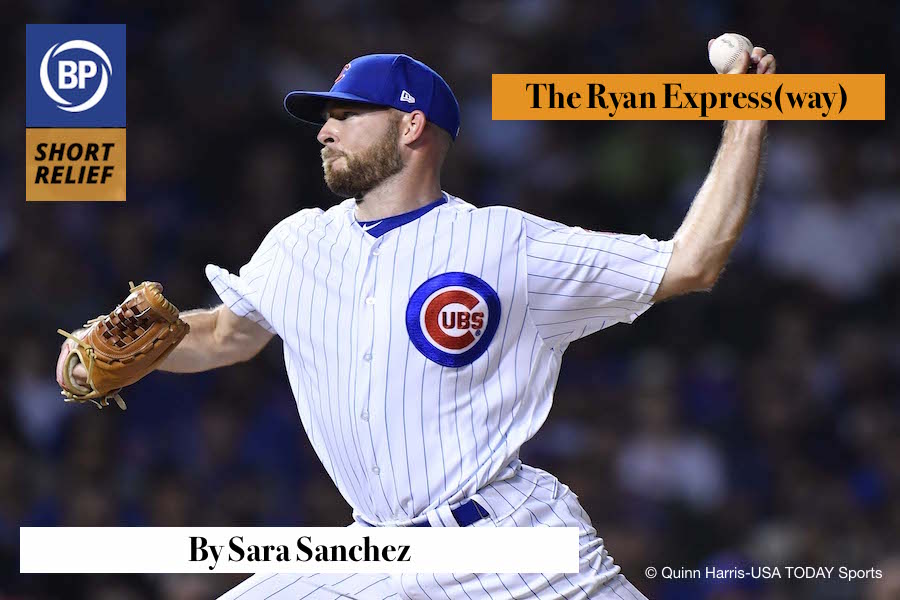 I was in the middle of Iowa but I was surrounded by trees and water, not corn. It was a work retreat at a camp about forty minutes away from Des Moines. I was also about forty minutes away from reliable internet. That internet quirk was by design, I’m sure. Unfortunately, instead of keeping me focused on the task at hand, it had me nervously wearing Cubs gear and trying to will winning energy in the general direction of Wrigley Field.

By Saturday I’d given up on getting Cubs updates and had sort of reconciled that this was going to be a baseball-free weekend when one of the other retreat participants tried to get my attention by yelling “Hey! Cubs!”

Aside: I’ve always wanted to be associated with the Cubs, so this really felt like a “mission accomplished” sort of moment.

We started talking, and I explained that I write about baseball in general and the Cubs in particular from time to time. Dan Ryan introduced himself and replied “No way! Kyle Ryan is my cousin.”

Now, for those of you who don’t obsessively follow the Cubs or the Tigers, you may be asking “Kyle, who?” Honestly, that would be forgivable. After all, Dan told me that the joke in their family was that he was the more famous Ryan, maybe on account of sharing a name with the famous Chicago expressway. Even my Cubs fan mother when I told her this story said “Who?” But I couldn’t help but smile at the thought of the Cubs reliever who has been one of the bright spots in a bullpen that has induced anxiety across the North Side of Chicago in 2019.
Kyle Ryan was on the verge of retiring before the Cubs reached out with a one-year deal and a plan to fix his mechanics. He’s now one of the linchpins of Chicago’s bullpen as they head into the final month of the season trailing St. Louis and clinging to their wild card spot. And here I was, 373 miles away from Wrigley Field talking to his cousin, Dan Ryan, about Kyle’s resurgence with his new team.

Dan Ryan may want to relish his last few moments as the famous Ryan.