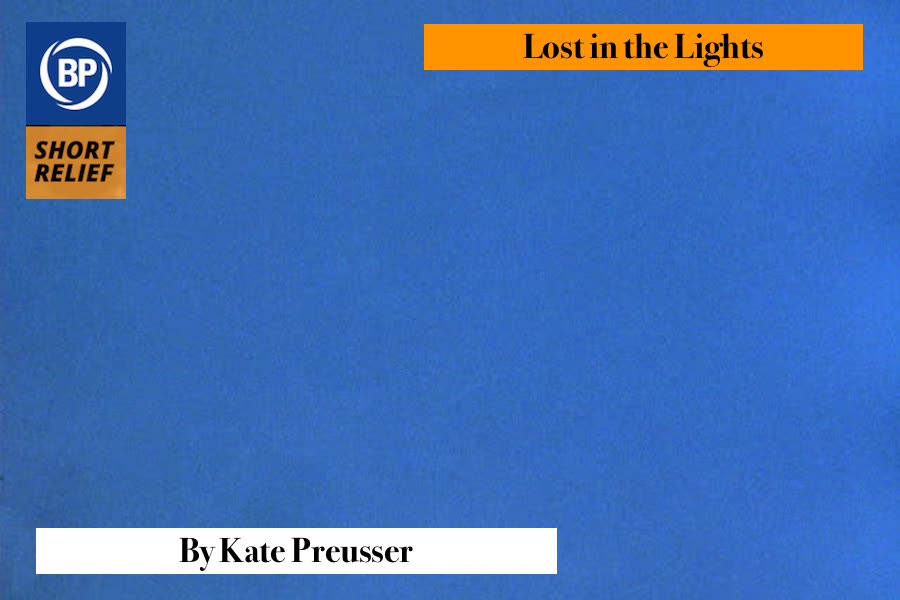 (There’s a baseball in here. Can you find it?)

Yesterday in the Texas League, Jordan Cowan of the Arkansas Travelers popped up a fly ball that should have been an easy out for either of the two Corpus Christi Hooks positioned on the left side of the infield.

Narrator: it was not an easy out.

Losing a ball in the lights must be the worst, most panic-inducing feeling. pic.twitter.com/ormd2Jq9x6

This is something one sees, a fair amount, in the minor leagues, where players are shuffled about often through a plethora of parks with their various minor-league idiosyncrasies. Unfamiliar shadows loom; stadium lights may be oddly angled, too bright or not bright enough. Some players are literally playing under the lights for the first time; there are no night games in the Dominican Summer League, and in high schools around the country, Friday Night Lights are for football, not baseball. The most challenging sky is probably in Arizona during Spring Training, often described as a “high sky”: a brilliant, cloudless, baseball-eating pale blue sky. Even seasoned major leaguers can struggle with the sky in Spring Training, and “sun doubles” are in plentiful supply. However, once the calendar turns to the regular season, the expectation is every routine ball will be caught; failure to do so may result in being posterized on the internet, showing up on “SC’s Not Top 10,” and a variety of fans of varying athletic abilities declaring they could make that catch.

How terrifying that moment must be, though, gazing up, expecting the ball to appear, and…it doesn’t, and it doesn’t, and it doesn’t. Frantically, your eyes rake the sky, knowing you have just seconds to make a play. Eyes cast aloft, you stumble blindly across foreign soil, hoping not to turn an ankle on a base or run into an oddly-located tarp. And somehow, at their worst moments, this is when baseball players are at their most relatable, to me. It’s the feeling of watching a beloved ring tumble towards a storm drain, the missing top stair, seeing the cat’s tail whipping towards your grandmother’s vase one second too late, all those daily, tiny, unanswered prayers to an indifferent universe.

At the same time the Hooks infield was trying to solve the Mystery of the Missing Baseball, Derek Dietrich, on a rehab assignment in Louisville, was having his own struggle trying to track down a routine foul pop-up from first base. Prayers, it seems, are going unanswered everywhere, and the bright lights and unforgiving sky don’t care how long you’ve been playing. 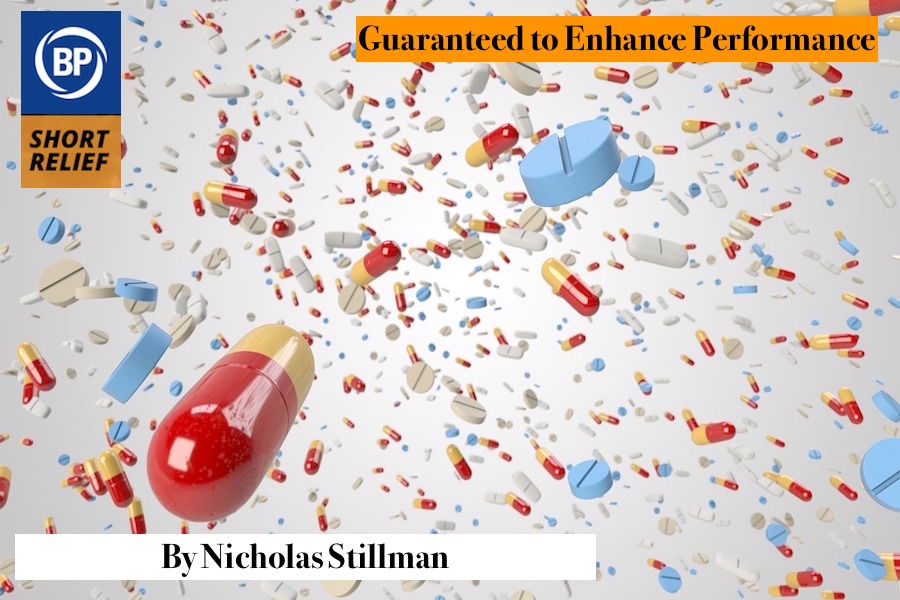 We’ve been talking about it for years and it’s finally happened: the MLB sent out a memo warning players against consuming truck stop sex pills. Wait, no, that can’t be the correct series of words.

“…we strongly urge players against taking any sexual or male enhancement product, from any source.”

That seems a little hypocritical from a league that refuses to admit they are juicing their balls.

*pauses for laughter to subside.*

Seriously though, Jeff Passan even noted that two players this year have claimed their positive PED tests came as a result of this sexified phenomenon. This means, to put on my gas-station-sex-pills-investigator hat, two of Tim Beckham, Frankie Montes or Steven Wright claimed their positive results came as a result of a high dose of Weekend Prince.

So what’s really going on here? Why are the baseball players hitting up the men’s room of bowling alleys to get their hands on some Rolling Thunder, some Angry Rhino, some Black Ant? Is it the stress of going 0-for-4 and/or blowing a save?

Despite the league’s warning about anabolic steroids, there exists another performance enhancing ingredient: PDE5 inhibitors. Ingredients that contain PDE5 inhibitors, such as sildenafil (the active ingredient in Viagra and some of these supplements), increase vasodilation during exercise. Increasing the blood flow would allow one to “get their maximum pump on”, as it were — though the FDA is not pleased.

This is incredible. Think about it: major and minor league baseball players have been walking into gas stations, bats over their shoulders, saying, “I’ll take two Excacy 5000s and, you know what, it’s leg day, better throw in a Genuine Triple Wicked.” For years. Years! The league knows about it, the players know about it, and now, thankfully, everyone knows about it.

This means that once the gas-station performance-pill companies realize their market has been thusly stimulated, they’ll no doubt change their marketing to meet this new demand.

What will that look like? How should they brand simultaneously to the players and The Players?

I have taken the liberty of mocking up some suggestions.

Finally, hall of fame performance without the BS.

Will get you called up for good.

Give your prospect the development it deserves.

Not so sure about this one.

For when it’s time to close

Lives On for One Great Year

Helps you out at the decision point

Slows down your Pace of Play 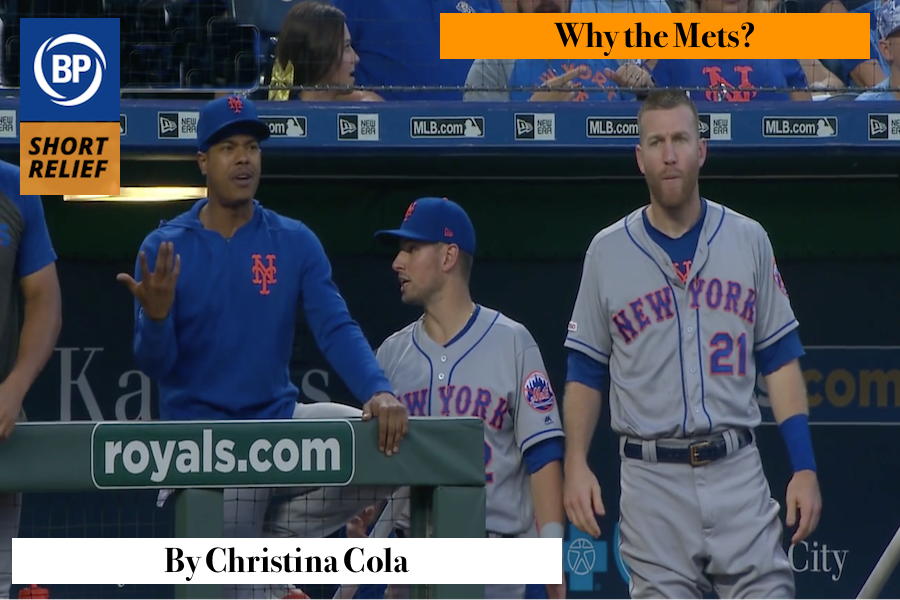 When Brad Brach met the New York media after signing with the Mets recently, he went beyond platitude. He claimed he is such a big Mets fan that he cheered for them during the 2015 World Series. In person. While he was gainfully employed by the Baltimore Orioles.

It’s usually more like the following: “I’m excited to be a New York Met and I can’t wait to get there and be a part of it.” That was what Marcus Stroman said when he found out he was going to the Mets a few days before the trade deadline. Stroman was heavily rumored to come to New York — in the Bronx. As a Mets fan, you can imagine my delight upon hearing that we had somehow snatched him away from our cross town rivals. But also as a Mets fan, I also thought: “Who on earth is excited to come play for the Mets?”

The Mets were 40-50 at the All-Star break, just slightly better than the Marlins, a trash fire by design. The last thing I, or anyone, expected was for the Mets pick up a pitcher like Stroman. You would assume coming from the rebuilding Blue Jays that he would want to go to a team all but guaranteed a postseason berth in 2019. I could even understand wanting to play for the Mets if they had, what I like to call, the “Dodgers Effect.” Every average or below average player the Dodgers have picked up in the last two or three years has instantly turned into an All-Star. Max Muncy was plucked out of Triple-A from the A’s system and went on to become Max Muncy. The Oakland Athletic the Mets decided to sign was Jed Lowrie. Whom or what is a “Jed Lowrie”? Exactly. I might have dreamed the signing after falling asleep to MLB Network one too many times.

The Mets’ crazy run that began a month ago was fairly unforeseeable. Do ball players just have a gut feeling about these things? Could they sense the team’s Amazin’ness flaring up? Do they choose to remember how fun it must have looked and felt in 2015 and forgot the many, many, many times they shot themselves in the foot before or since? Do they remember the crowning of King Yoenis Céspedes, and not the fractured his ankle stepping on a hole at his ranch part? Do they do any research at all on their history of misdiagnosing injuries? I get that Stroman is from Long Island, and maybe he is just being nice, but just maybe he really grow up loving this team through all the heartache, and as a major league player, he wants the chance to play for their hometown crowd? I think nowadays that’s easy to forget when we look at where these players ultimately want to end up.

I’ve grown so accustomed to players chasing the team who will give the biggest contract that sometimes it’s just about wanting to come home. Being the guy with the hometown glory can be an amazing feeling all its own. Since the break, Stroman already got to experience that once. Citi Field going wild, his mom cheering, jumping up and down in the stands. It reminded me of when I was a kid and my dad would pitch to me in the backyard. Smashing baseballs into the sky, my aunt sitting nearby watching this all unfold, and in her broken English-Italian accent she shouted, “Ey! You gonna play for the Mets?” As a kid it seems like a no brainer. “Yeah! I’m gonna play for the Mets!”