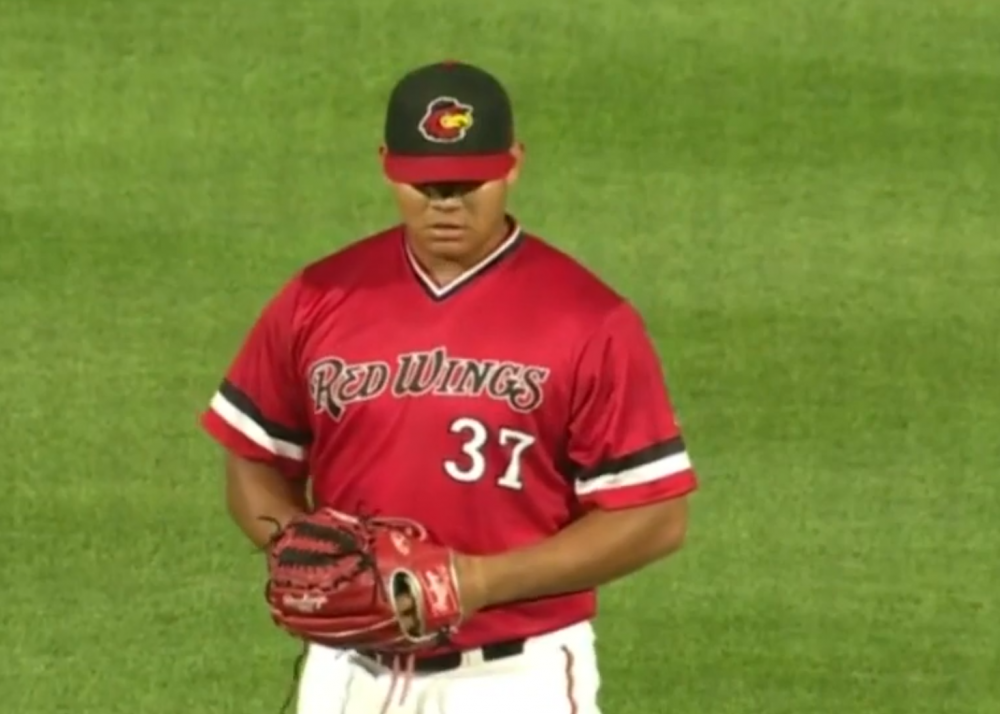 As the first-place Twins try to hold off the Indians in the AL Central, there’s growing speculation that Minnesota will call up 20-year-old* right-hander Brusdar Graterol for some September (and perhaps October) bullpen help. Graterol is a consensus top-50 global prospect with some of the highest-octane raw stuff in baseball, regularly hitting triple-digits with his fastball and topping out as high as 103.8 mph last week.

He was aggressively assigned to Double-A to begin this season, where the youngest pitcher in the Southern League went 5-0 with a 1.89 ERA in nine starts before being shut down with a shoulder injury. Two months of rest and rehab followed, and when Graterol returned to a Double-A mound on August 8 it was as a reliever. Two weeks and three relief appearances later he was promoted to Triple-A. You can see why the speculation is swirling.

Graterol celebrated his 21st birthday yesterday, so even if a 2019 call-up is coming he won’t be added to the list of pitchers to reach the majors before turning 21. However, simply pondering a Graterol promotion is a big change for the Twins, who rarely moved pitching prospects aggressively under the previous front office regime and haven’t had a pitcher debut for them prior to turning 21 since 1990.

This weekend at the Baseball Prospectus Night at Target Field event, I asked Twins general manager Thad Levine specifically about Graterol, but beyond that about the process involved in deciding when a young pitcher is ready for the majors. Levine’s answer was a long one — and he also mentioned 24-year-old Jorge Alcala, who joined Graterol in recently being shifted to the bullpen and promoted from Double-A to Triple-A — so here’s the full quote:

Both of these guys have started for the lion’s share of their careers. We’ve put them in the ‘pen, and make no bones about it, one of the reasons we put them in the ‘pen was because we thought maybe that was the fastest track for them to impact us this year. This isn’t something we’re committed to, this is just something we’re open-minded to. We feel as if there was nobody we were going to acquire at the trade deadline who had the abilities that these two young men have, and rather than trade them away for a short-term fix, maybe we should look at them as the short-term fix.

I was blessed about 10 days ago, I went down to Pensacola and watched one of [Graterol’s] first relief outings. I personally, outside of Aroldis Chapman, have never seen an outing in person where somebody threw only one pitch below 100 miles per hour. And that was one get-me-over fastball at 99. This guy has a miraculous skill set, he’s been blessed. We went out and got two relievers at the deadline, but we don’t view that as the end of the moves we can make. The other moves we can make is to optimize some of the talent we have in our system, have them come up here.

Now, don’t get me wrong. Not all of these guys are going to come up. And when they do come up, we’ve got to understand that they’re 20 years old, by and large, with zero major-league experience. We’re going to have to be a little bit patient with them on the front end, but I would expect that somebody out of that group is going to come up and possibly impact our playoff opportunities for this year.

It’s hard to envision former general manager Terry Ryan saying … well, any of that, really. Like much what has happened since the Twins fired Ryan and brought in Levine and chief baseball officer Derek Falvey as the front-office duo following the 2016 season, it’s a whole new world in Minnesota. But what about elsewhere? How often do other teams add pitchers before their 21st birthdays? And what happens to those young arms?

That hitters are more likely than pitchers to reach the majors before 21 won’t surprise many people. There’s long been a sense that young hitters can more strongly control their own call-up destiny simply by performing extremely well at every level, whereas pitchers are often held back at least somewhat regardless of their performance due to workload, health, and development factors.

Conventional wisdom says young pitchers need more protecting from injuries, more minor-league seasoning, and more fine-tuning of their raw talent before they’re ready to take on the world. All of which is reasonable. However, even if that’s mostly true, it’s also true that young pitchers get injured at a very high rate regardless of how carefully they’re handled and, even if they remain healthy, they’re likely to throw harder at 20 than at 30.

Or, put another way: Why waste a young pitcher’s bullets in the minors? Why ask a great 20-year-old pitching prospect to gradually work their way up the minor-league ladder rung by rung, throwing 100 or more innings at each level, if they’re risking injury that entire time and likely to have at least somewhat diminished raw stuff whenever they finally make it to the majors anyway?

There’s a fine line, of course. No one is suggesting every promising 20-year-old pitcher be rushed to the majors simply because they hit triple-digits on the radar gun. But special ones who combine a great baseline performance with an advanced approach? At the very least, there’s likely more room to put young pitchers on the fast track than we’ve generally seen, and of late several teams, including the Twins, seem to agree.

Since the beginning of last season, six pitchers have debuted before their 21st birthday, the highest two-year total in the 2000-2019 sample. One is Blue Jays right-hander Elvis Luciano, a 19-year-old very obviously rushed to the majors out of necessity after being plucked from the Royals in the Rule 5 draft. He’s pitched sporadically in a mop-up role and will surely be sent back to the minors after the season.

Of the other five, three were Braves (Mike Soroka, Bryse Wilson, Kolby Allard) and two were Padres (Andres Munoz, Adrian Morejon). Those two teams called up more pre-21 pitchers in two years than every other team has combined in eight years. That’s not a coincidence given the aggressive nature of bosses A.J. Preller and Alex Anthopoulos, whose approach has applied to pre-21 hitters (Ronald Acuna, Fernando Tatis Jr.) as well.

The sample of pre-21 pitchers to both debut since 2000 and already have enough time in the big leagues to pass any kind of real judgment on their careers is about 28 names — far too small to carry much weight in either direction. However, given the relatively high bust/injury rate for pitching prospects in general, it’s difficult to look at the pre-21 group and conclude they’ve collectively suffered by arriving so early.

Feel free to quibble with any specific placements, but here’s a quick-and-dirty attempt to separate the pre-21 debuts into three career outcomes: good, moderate, poor.

There’s selection bias at play here, because in addition to pre-21 debuts almost all being top prospects they were specifically deemed ready for the majors at the time. So we should expect the group to out-perform a random sample of pitching prospects or even top-100 pitching prospects. Factoring that in, those are seemingly still very good results. Several superstars, tons of All-Stars, lots of decade-plus careers, and very few all-out busts.

Graterol has already blown out his elbow once, missing the entire 2016 season, and he just got off the injured list after two months on the sidelines with a shoulder injury. His odds of pumping triple-digit heat for the next decade without another lengthy injury absence seem slim, so why not get him called up, contributing to the big-league team’s success, and earning a big-league salary while he’s slinging the best raw stuff of his life?

You need to be logged in to comment. Login or Subscribe
Ross Fortner
I totally agree...it's been great watching all these young guys get up to the Bigs the last couple years. One trend I actually do like in baseball is the way prospects are handled nowadays as opposed to years past.
Reply to Ross