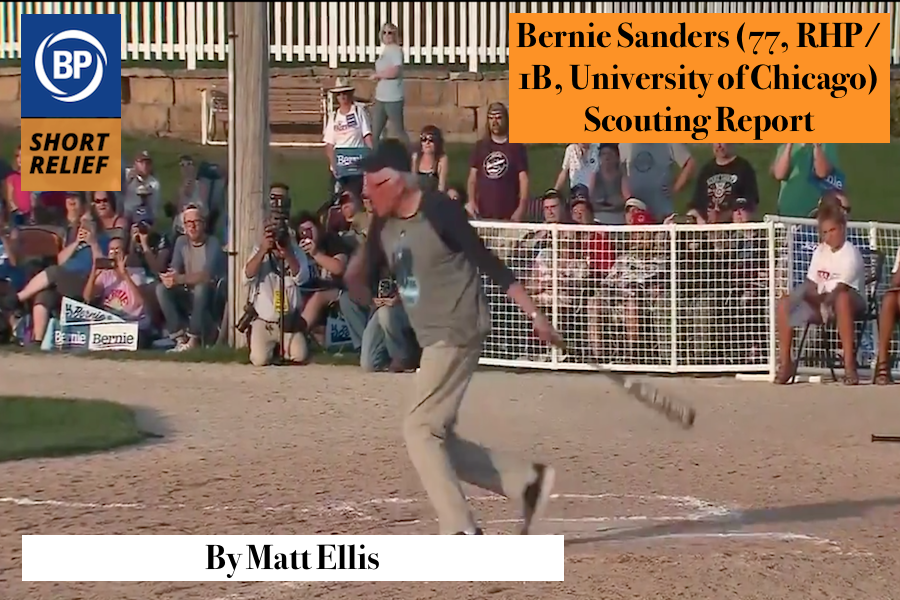 Mechanics: Quite fluid delivery, quick start/stop motion. Sets up strong with right leg, frontloads his upper body weight to increase velocity, could be warning signs for lower back problems in the future. Has good deception with grip in glove, gets set smoothly before beginning motion. Velo 05, vertical motion 20. Only problem is that he sets up literally halfway between the mound and home plate, which I’m pretty sure is in direct violation of the MLB rule 8.01a.

Hit: Terrible stance inside box, stutter step possibly also illegal. But incredible speed out of the box for a 77 year old, and nice, clean follow through with one hand. Griffeyesque, except for the parts of it that don’t resemble Griffey’s hitting ability in any way, whatsoever. Recognizes pitches early and tracks well. Excellent contact skills, except he was probably facing 40mph at best. Will be interesting to see how he tracks live pitching.

Power: Lots, inexplicably, somehow, stunningly. And yet when pressed, will go on and on about “distributing” it or something along those lines.

Baserunning/Speed: 80 grade when scored on handicap, 02 as is.

Glove: He has a glove, yes.

Arm: Relies too much on underhanded throw — topping out at 10 grade at best. But I’m told this to save energy for when he needs to shake his fist at corrupt oligarchs in righteous anger. Difficult to grade, do not place him anywhere in the outfield.

Overall: Bernard Sanders would be an absolute disaster of a draft pick for any team in the 2020 MLB draft. For starters, he’s 77 years old, and it’s troubling to think he may have never played an inning of ball above the high school level at any time since the late 1950s. If he faced even college-level pitching its possible he would swing himself into a herniated disc, and his insistence that the Brooklyn Dodgers were stolen from the good working class people of his hometown borough does not bode well for his ability to consider himself an atomized individual playing to increase his own salary, first and foremost.

At best, he’s a warm body on the end of the bench who can be shuttled to and from the 26-man to make room for players returning from the IL, at worst he mobilizes the entire clubhouse to strike for guaranteed contracts, to say nothing about what havoc he would wreak in the minors. Steer clear on draft day, and perhaps let the man find a career in something else, say, politics or the like. 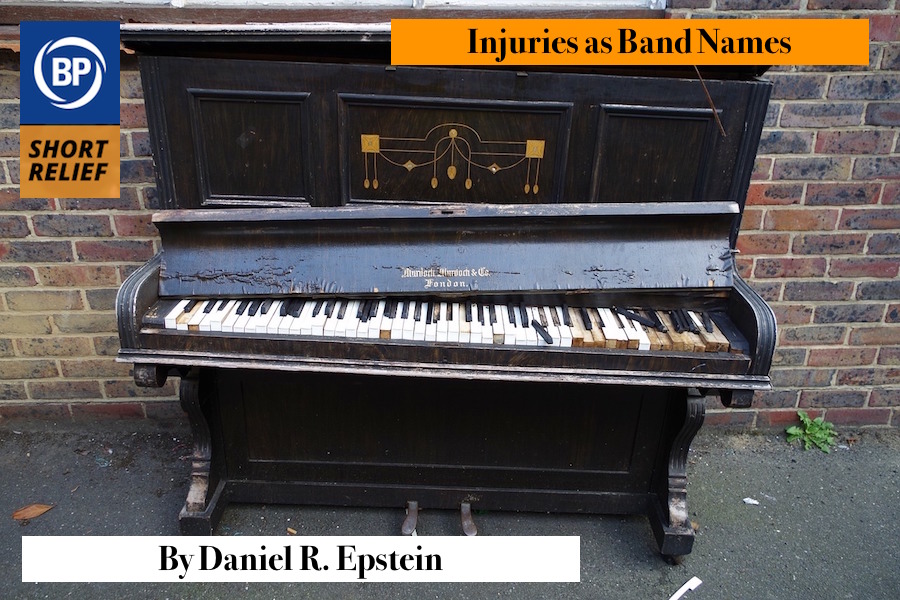 Watch enough baseball, and you become desensitized to the injuries. We’ve all heard “elbow inflammation” and “sprained knee” so often that they lose meaning. The same goes for band names. If you listen to enough music, even the strangest monikers don’t impress you. But which common baseball injuries could double as band names?

Pulled Groin: They were seniors when you were a freshman, and the epitome of cool. Sporting real facial hair, they wore the clothes from Hot Topic that your mother wouldn’t let you buy. They were the best punk band in the whole school, and when the bassist actually talked to you, you were too starstruck to speak. All you could do was nod wordlessly, mouth agape, gladly consenting to buy their comp for $20.

Blisters: An acoustic side project involving members of Limp Bizkit, Sevendust, Incubus, and Papa Roach. They were a commercial and artistic failure.

Tommy John: Dr. Tommy John is an orthodontist by day, but leads a Parrothead band on evenings and weekends. You’d never expect such an upstanding member of the community would hold the record for “fastest body shot” in six different bars.

The Obliques: Hailing from Manchester, England, The Obliques were an obscure British Invasion band. Their single, “Love Danger” got some airplay in the UK in 1962, but never charted in the US. When you find their 45 in your attic, the song is stuck in your head all week.

Pulled Hammy: Pulled Hammy isn’t exactly the name of the band, for the band has no name. It’s the best darn BBQ pit in the county, and on Friday nights some of the boys from the kitchen play country, blues, and zydeco. You’re only there for the smoked brisket, of course, but an hour later you’re line dancing.

Lat Strain: You’ll never admit how important Lat Strain was for you. The band was forgettable, even by 80s hair metal standards, but the girl from the video was your first crush. It was a cover of “Love Danger” by The Obliques, and her big hair and spandex inspired feelings you didn’t know you had. She briefly married Rance Mulliniks. Or maybe Ron Karkovice? Someone like that.

Plantar Fasciitis: This is the most psychotic mosh pit you’ve ever seen. You’re used to a few people bumping into each other in a VFW at a Pulled Groin show, but during Plantar Fasciitis, some dude had his nose ring ripped out. Risking dismemberment, you close your eyes and jump in. At some point, you fall down, but the one really buff dude helps you up. Ten seconds later you emerge, bruised but whole. Someone else’s blood is on your jeans. You’ll call that a win. 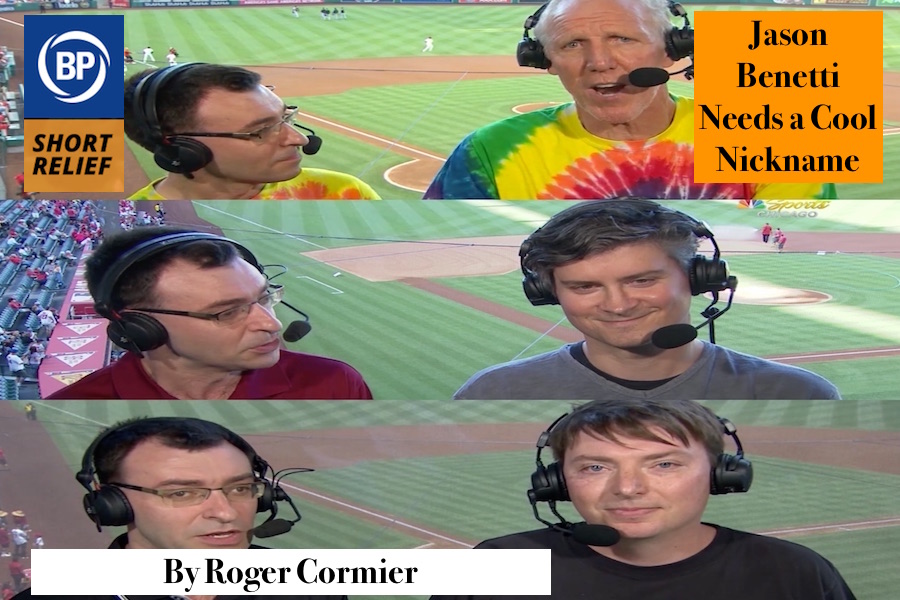 Only Jason Benetti could have played the straight man in the White Sox’s stunt programming this past weekend. It was, technically, team VP and chief marketing officer Brooks Boyer’s idea to replace a vacationing Steve Stone with people who had never announced a baseball game before, but the 35-year-old Benetti was the one who in 2018 alone worked college football play-by-play, a national championship for electricians for ESPN2’s “The Ocho” marathon, the Statcast broadcast of the National League Wild Card game, wrote and narrated animated shorts for the Cerebral Palsy Foundation, covered Sox games a retiring Hawk Harrelson didn’t, and worked on NCAA basketball telecasts, most notably the Maui Invitational during Thanksgiving week, where he met, and survived, Bill Walton.

I must admit I am not a Benetti completist, but it was not surprising to hear him admit on Sunday that his dream was to make so many John Mulaney references the comedian himself would check out White Sox games, fall in love with the White Sox, and want to broadcast a game with him.

Although come to think of it, it is kind of incredible for a major league baseball announcer to have that wish.

It was also (sadly) incredible to hear someone in a major league baseball announcers booth — comedian and White Sox fan Jimmy Pardo during his three half-inning pop-in on Sunday — that it was ridiculous for people to complain about protective netting.

It was also incredible to have Michael Schur, aka Ken Tremendous, lead rabble-rouser of the website Fire Joe Morgan, which endlessly mocked and ridiculed crappy, tired, problematic, hopelessly clichéd broadcasting and sportswriting in baseball, provide color for a baseball game. Because Benetti had trained his viewers well, a Fire Ken Tremendous blog was launched before the bottom of the first.

Benetti doesn’t automatically turn off the middle-aged and senior citizens watching with his young whippersnapper wishes though. He grew up a White Sox fan, and more than happily joined fellow Pale Hose supporter and former SNL writer Mike O’Brien (wearing a Joe Crede shirsey) in lovingly impersonating Hawk (“Alexiiiii” for more than one ground ball to a White Sox middle infielder.) Benetti is literally the mellifluous play-by-play voice of Statcast baseball, the internet’s present and what we believed to be baseball television’s distant future you could bring home to your mother.

Alliteration, for one thing.

Also, he stabilized the ship when a Bill Walton mutinied and wanted to send the Mayflower to Laguna Beach. He allowed Schur room to talk about the baseball game unfolding in front of him, revealing his smart baseball mind, only inquiring three times howThe Good Place ends. He let O’Brien’s fandom and knowledge of the franchise come through, and set him up to renew his feud with Betty White.

Here’s @MikeOBrienXOXO saying what everyone else is afraid to https://t.co/xXnHaoM2Vu

Baseball broadcasts are meant to be entertainment, you know. Deconstruction of television has long become television itself — finally baseball noticed. Benetti and the White Sox crew showed people that the kids today don’t think baseball is the bug, it’s the feature. Doesn’t mean we can’t have fun with it, or call out sacred cows like Betty White.

The one drawback from any fun weekend is it has to end. On Monday night, with the White Sox in Minnesota, Benetti was back at it with his usual partner. 48 hours after Schur kept jokingly asking if Benetti thought what was upcoming was a “big pitch”, the White Sox were up 6-3 with one out in the bottom of the ninth inning and the potential tying run for the Twins on deck. “This is a pretty big out,” noted Steve Stone.

You need to be logged in to comment. Login or Subscribe
Llarry
I've heard Steve Stone work successfully over the years with Harry Caray and Hawk Harrelson. Putting him in the booth with an actually-engaged, qualified announcer, might not be playing to his strengths...
Reply to Llarry
drdaley
Back in the '90's I believe for about 3 years or so you could pay to broadcast a Cardinal's game.......for an inning. You picked your date, got assigned an inning at random, and then 2 innings prior went to the special, small booth on the 1b side, at the same level as Mike Shannon & Co. You had a small tv monitor, and at the end you got a video tape copy of your time, complete with an occasional cut aways from the action of you . Both my brother and I long time Cadinal fans got it as Christmas gifts. He did it with a close friend, both half plotched. A year later I did at a Card-Cub game, great for me as a Card fan who had long ago left St.Louis, and for my Cubs fan brother-in-law. We did it seriously, he as pbp, me color. I had to come back to Busch from out of town. We luckily got an inning where both the Cards and Cubs got men on base. Forget if either team scored, but it was better than my brother's, as both teams went down in order! Not sure why the Cardinals stopped this.....probably as they could make more $$ from the small booth as a corporate box!
Reply to drdaley