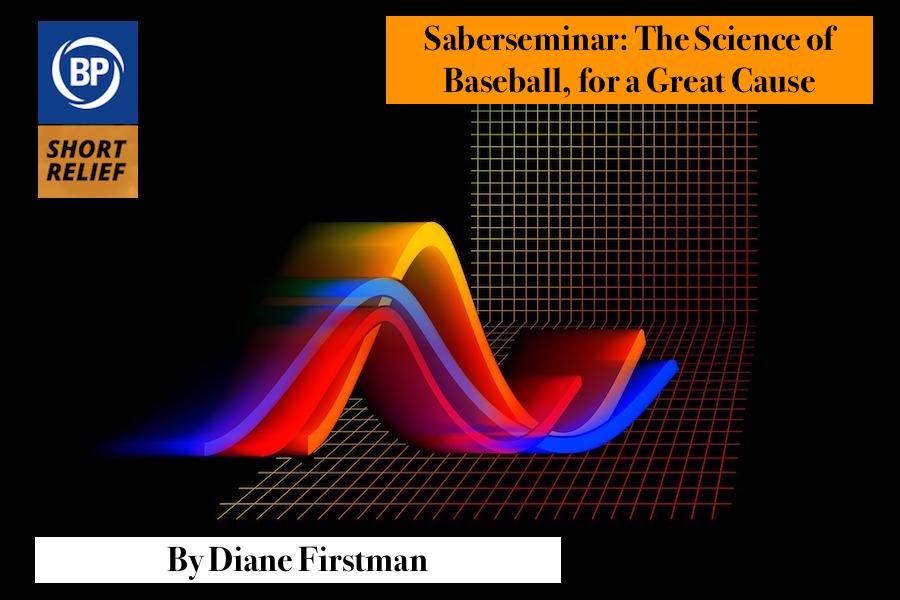 This past weekend was the ninth annual Saberseminar, held at Boston University. Touting itself as “Sabermetrics, Scouting and the Science of Baseball”, it is a gathering of roughly 350 nerdy baseball types from a variety of backgrounds: physicists, data wranglers, MLB front office guys (and gals) and tech-savvy fans of the game.

The event is primarily a fundraiser for the Angioma Alliance, an organization by and for those affected by cerebral cavernous angiomas (CCMs), which are mulberry-shaped abnormal blood vessels with thin leaky walls in the brain or spinal cord. These angiomas can grow and hemorrhage at any age, resulting in debilitating seizures. Red Sox prospect Ryan Westmoreland had his career cut short due to this condition, and Saberseminar event co-organizer Chuck Korb has dealt with CCMs for years. Thanks to ticket sales and generous corporate sponsorship of the event, Saberseminar has been able to donate more than $250,000 to the Alliance since 2011.

Dan Brooks, the other co-organizer of the event, describes the goals of the weekend as three-fold: 1) fundraising, 2) research, and 3) job-seeking (there is a resume drop for those looking to get into the administrative side of baseball). Whereas a regular SABR gathering might focus more on historical analysis of the game, Brooks states that Saberseminar’s emphasis is on the game’s “mechanics”. Brooks and Korb are proud of the diverse make-up of the attendees and presenters, and believes they mirror the diversity of the baseball research community. The Seminar offers at least two student scholarships at $2,000 each to female and minority students who want to work in baseball analytics. As stated on the seminar’s website, “We feel these groups are criminally underrepresented in baseball front offices, and hope our scholarships can help make a small difference.” To apply for the scholarship, students are expected to present an abstract at the seminar. A large proportion of the student abstract presenters get jobs in sports, and many of those have made their first big sports presentation at the conference.

There were over 50 presentations and panel discussions at this year’s get-together. “Women in Sports” was this year’s theme, so we were treated to a conversation between Jean Afterman (long-time Yankees assistant GM) and Raquel Ferreira (Red Sox Senior VP for Major League and Minor League Operations). A lawyer by trade, Afterman started out working for a player agent with an emphasis on Japanese clients. She now represents the Yankees in cases impacted by changes in labor law or MLB rules. Ferreira started with the Sox as an administrative assistant in 1999. Her advice to those working their way up the business ladder is to be yourself, to own up to your mistakes, and to dress for the job you want, not the job you have.

Another panel with a distaff tilt to it was titled “Dirt in the Skirt”, featuring women in various baseball jobs, such as umpire Penny Barber, scout Robin Wallace, Yankees scout Kelly Rodman, Liz Benn of MLB, and Donna Mills of Team USA baseball. Every woman on the panel stressed the importance of being a voice and public presence for a young girl growing up today, and giving her the knowledge that there IS a place for her in baseball.

There were talks given on such diverse issues as: the impact of “c-flap” helmets on batter performance (no statistical significance), which side (batter or pitcher) benefits from a long at-bat (starting pitchers win out over batters, while relievers lose out against batters), and rethinking the shape of the strike zone (based on ball/strike calls, the strike zone isn’t a square, it’s a “superellipse”).

One of the highlights of the weekend was Dr. Meredith Wills, who did yeoman work in quite literally taking apart baseballs to determine the cause of the home run spike in the game of late. She presented findings that detailed changes in the seam height in the balls being used this year. The seams are lower, which makes the ball harder to grip and also reduces drag. Additionally, the leather is smoother (also contributing to less drag). Less drag means longer flights means more homers.

Given some of the buzzwords heard throughout the weekend (including but not limited to biomechanics, linear regression, predictive modeling, optimization, machine learning, and decision trees), this isn’t your father’s baseball game anymore. But just because there has been an explosion of numbers and measurements in the game, the weekend proved just how much heart and passion the game still generates. 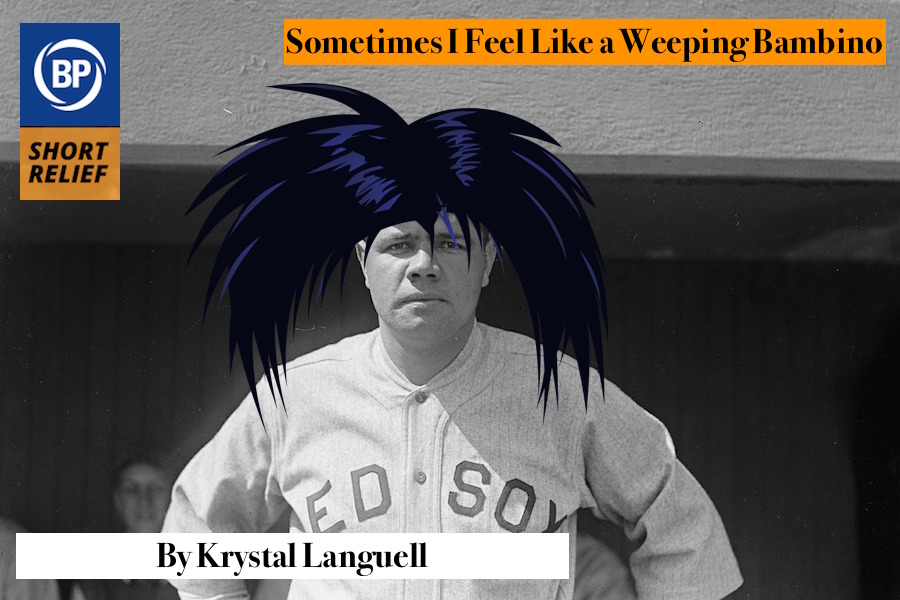 The internet is really only good for a couple of things anymore. Unlikely animal friendship documentation. Next-day delivery of household goods. Grandmas accidentally tagging Grandmaster Flash in Facebook posts. Parody social media accounts, like ElBloombito or BronxZoosCobra. And crossover or mashup accounts, like textsfromyourexistentialist, which offers Jean Luc Godard quotes in iPhone text bubbles superimposed over paintings, and Emo Bambino, which pairs photos of Babe Ruth with lyrics from emo bands. And whatever you’d call Garfield Minus Garfield.

Maybe I should fly out to Montana—
It’s quiet!

Out past the electric lines
Out where no one will know my name
And whoa-oh, I’ve had it now I am
Walkin’ down to your house pic.twitter.com/7m5Q1mUnlb

What’s most stunning about this account is the inescapably American nature of seemingly every picture of Babe Ruth ever taken. Here he is doing double duty, combining baseball and the second most American pastime, confidently pretending to do something (above: swing a lasso?) you are not trained in. We all know the Babe liked to have a good time, and many of the images utilized by this account conform to or confirm that understanding.

TWO BEERS IN
ALREADY FEELS LIKE IT’S ONE OF THOSE NIGHTS pic.twitter.com/v3DdmCFqbs

The architect of @emobaberuth certainly plays into the pop culture image of Ruth as a “good timin’ man”. But unlike the reliably surprising, comical reversals of viewer expectation that sillier social media accounts offer, Emo Bambino often offers up unironically devastating text and image combos. Notably, following the recent mass murder in El Paso, the account reused an image of Ruth, head in hands, stogie between his index finger and the next, which had previously appeared as follows.

I think it’s about time that I warned you I might cry in front of you
But I don’t want you to feel like I’m afraid of the truth pic.twitter.com/cgppy2WVJx

The tweet that appeared on August 4 included lyrics with some swears and the hashtags #WhiteSupremacistTerrorism and #EnoughIsEnough. Predictably, it was razzed by a few seeming bot accounts that took umbrage to this constellation of images and text.

The serious point stands. The rawness and sincerity of emo lyrics paired with the Bambino is a powerful depiction of pain. Sometimes I feel like a weeping Bambino, and I’m grateful for his presence on Twitter. 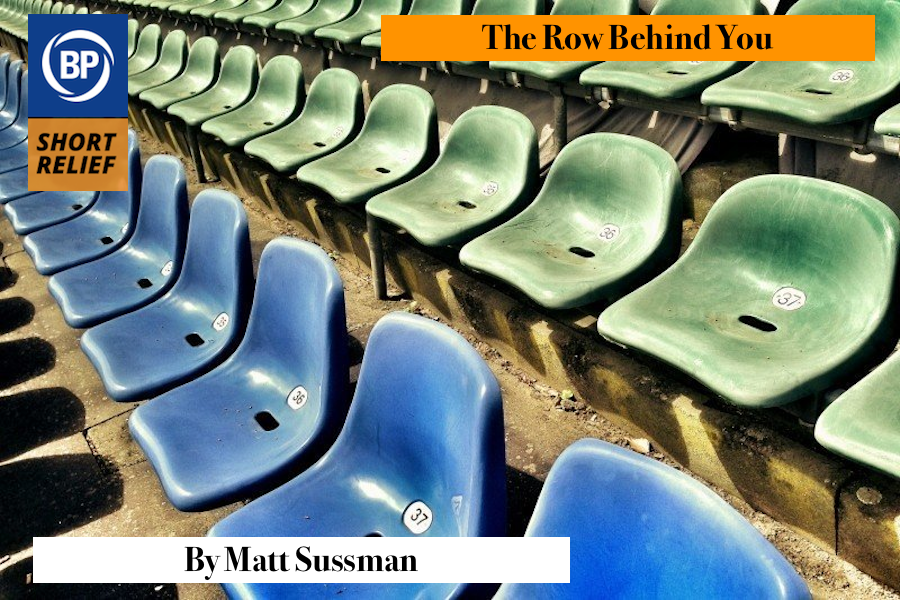 My first ever baseball game was a 1993 match between the Cincinnati Reds and the Montreal Expos. One of their scoreboard trivia games was basically having the fans try to guess the name of the former Reds player given their picture. As a young lad of 10, I had no idea who any of these players were. But I recall the grown-ups behind me were really good at it. Except one player came up and a confident male voice said, “Tim Belcher?” followed by an incredulous female voice, “Belcher!?” I don’t know why I remember this exchange. But I can tell you how I remember it: they sat behind me.

Eavesdropping in the row behind you is not endemic to baseball, it’s a storied tradition wherever rows of seats are carefully assembled. We’re all paying attention to the game when we’re not staring at our phones — am I right millennials? — but we’re also acutely aware of the drama in the rows behind us. We’re learning so much about parents that said crazy things on the phone last night. We’re getting hot hearsay about bosses who won’t leave them alone. We’re learning so much about Steve. Freaking Steve.

Once I was at a Triple-A game, probably the year after they put in the pitch clocks. The people behind me noticed them but weren’t entirely sure what they were.

“What’s that timer for?”

“Is that for the batter to swing?”

Eventually they figured it out enough, right there in the open, behind my ears.

This may be a reason to sit in the front row of any section — because that conversation isn’t going to touch any innocents. Your conversation dies with the passage of innings. On the other hand, you may consider sitting in the last row of a filled section, for your inane conversation may have a trickle-down impact on your entire group. Chatternomics, if you will. Start having a chat with your pal about, I don’t know…abolishing the draft and holding Major League Baseball owners accountable to the cities that provide them subsidies. Or about more taco stands. It’s your call.

You could additionally be that person to stand against the natural order of baseball’s oral tradition of crosstalk and, dare I say, turn around to add to the conversation. Your mother is just looking out for your best interest. You don’t have to like your boss, you just have to get along with them. And I know, honestly, what is Steve’s deal? C’mon, Steve.

You need to be logged in to comment. Login or Subscribe
Shaun P.
Diane! Thanks for the recap and so good to see you again in the virtual pages of BP!
Reply to Shaun