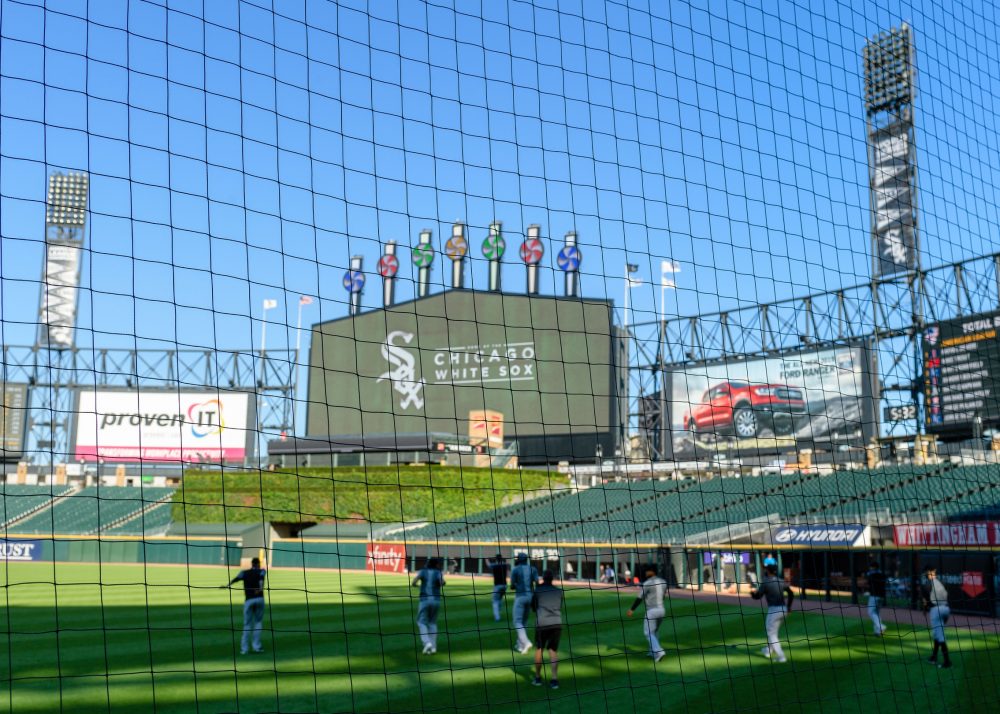 You’re going to see a lot of people say that this play wouldn’t be possible without the extended netting at Guaranteed Rate Field, which is both true and not. Certainly what Jeff McNeil did — rebounding into the field, etc. — would not be possible without the netting. But the catch itself could and would still have happened, I’m quite confident. He caught the ball before leaping into the stands, and even if he hadn’t, we’ve seen many a player leap into the stands without regard for their own safety in pursuit of an out. Not to mention it seems borderline impossible for someone to make that calculation and recall whether there is or is not extended netting in the amount of time it took for McNeil to decide whether he was going to go for this. In fact, McNeil said as much:

Jeff McNeil said this play, in which he went flying into the protective netting, was "kind of fun."

"That’s instincts taking over," he said.

And if the netting wasn't there?

"It would’ve been unfortunate for whoever is in the front row. I’m going into the stands on that." https://t.co/JjyWmMlyBf

But the important thing in this specific instance and in these scenarios writ large, is that we don’t have to care anymore. We do not have to find out whether he would have made that catch otherwise, and we need not feel bad for anyone in the front row. The nets were there and no one was hurt in a situation that previously could have easily resulted in an injury, either to a player or a fan. And no one, to my knowledge, declared that the game was ruined because of the presence of the nets.

I’m understanding of the idea that some people feel that their view is affected with a net in front of them. These individuals won’t be swayed by the notion that the best seats in the house have been behind netting (or fencing) for a long time. They want an unencumbered view of the game and they’d like to have it in the lower bowl of a ballpark. I get it! But where these people tend to lose me is when they prioritize that view over the safety of their fellow spectators. It’s easy to go straight to kids and elderly in this role, but really, age doesn’t matter. Whether someone is looking at their phone doesn’t matter. Whether they’re turned around talking with a friend in the row behind them about the Bravolebrity they saw on the street doesn’t matter. That there is a warning about flying bats and balls on the back of the ticket they bought does. not. matter. The frequency with which people actually get hurt, or seriously injured, or any of those distinctions is irrelevant to the discussion, no matter how much anti-net backers tell you they are.

These arguments are all distractions from the central thesis that those who detest the nets hold, which is simply that their view is worth more than your, or anyone else’s safety. And they are willing to allow others to be harmed to retain that quality of that view. Please understand that this isn’t about risking harm to others, though that is of course present, but rather that every year fans are harmed by high-velocity projectiles, or a player diving into the stands. They are not always severe injuries, but they need not be serious for us to value them seriously. The nets will not stop every potential or future injury to a fan, but the perfect need not be the enemy of the improved. Reducing injuries that needn’t occur is a win, full stop. The extended netting at ballparks do exactly that, and they can even add in a bit of fun along the way, in the form of catches and rebounds like the one Jeff McNeil made on Thursday. And that’s why that play was the best thing in baseball this week.

We don't even know. Just, yeah.

You need to be logged in to comment. Login or Subscribe
Matthew Marquez
So basically any argument which shows how ridiculous the people who want netting are isn't relevant to the discussion because you say so. Revolutionary work you're doing here bud.
Reply to Matthew
Craig Goldstein
None of those arguments show that people who want netting are being ridiculous. They show how little people who won't support netting care about others, which I said.
Reply to Craig
Matthew Marquez
Dude how often is a pitch thrown? Every 15 seconds? You have to pay attention to about 1/7th of the game and that's it. Is this honestly too much to ask? Trying to discredit all valid arguments against netting by trying to smear everyone against it as somehow "not caring about others" is pretty low. Where else do you apply this logic? I get the feeling this isn't the only argument you do this with.
Reply to Matthew
Craig Goldstein
You can keep saying they're valid or trying to restate them but everything you say boils down to the point that you care more about your view than others' safety. There are a lot of reasons people don't look up for every pitch and it isn't your or my decision to decide the validity of those reasons.
Reply to Craig