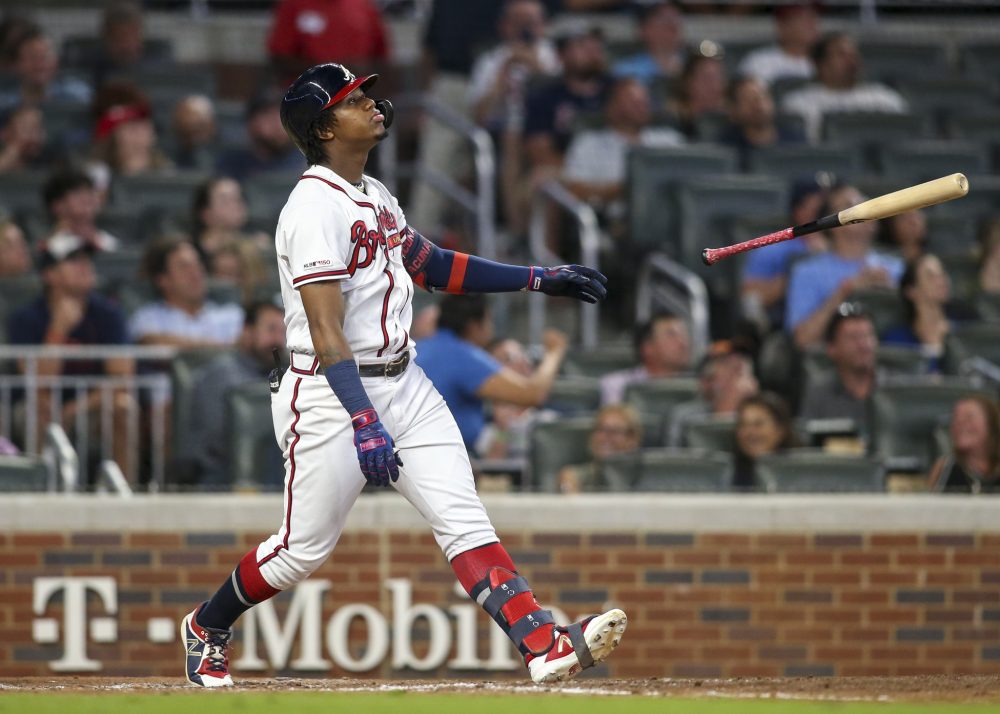 Several weeks ago, we looked at the accuracy of Statcast launch speed (a/k/a “exit velocity”) measurements, and some of the stadium effects that might be confounding those measurements. Today we’ll move on to launch angle.

The modeling approach for launch angle is substantially the same as for launch speed. The general details, including the removal of probably-imputed values, are described in the previous article.

For launch angle, a hierarchical model was fit with varying coefficients assigned to the groups of batters, pitchers, and stadiums who all had at least one batted ball in play. We placed a unit exponential prior on the precisions of these effects.

Because angles operate on a circular scale, errors are assumed to fit a circular normal distribution, rather than the standard normal distribution. All seasons were modeled separately, with values modeled in radians and converted back to degrees for ease of understanding. We looked at full-season data from 2015-2018, and 2019 data taken through the beginning of the All-Star break.

As before, we start by looking at the overall spread among stadiums over the years:

Let’s look at the modeled stadium spreads by season, focusing on the stadiums which exceed the standard deviation (a/k/a the “margin of error”) by the greatest amount in either direction. These are the stadiums where we are most confident there is something “off” about either the stadium environment or the way Statcast is measuring balls in that environment.

First, as implied by the summary presented in Table 1, the spread in launch angles among stadiums progressively declines over the years. Again, this is consistent with ongoing improvement in Statcast measurement performance.

Second, as with launch speed, we see plenty of stickiness on either end of the spectrum from year to year. Colorado, San Diego, and Houston consistently report the lowest launch angles, even after we control for the batters and pitchers who play there. At the other extreme, Detroit and Boston tend to run hot, with Seattle and Wrigley Field in Chicago popping up often as well. (Detroit retains its status as one of the more interesting parks in baseball).

Third, while much progress has been made, there have been some startling spreads in launch angle measurements between stadiums. The same hitter in Colorado in 2015 would have their launch angle, on average, reported over 8.5 degrees lower than Baltimore for the same type of ball contact. That gap has improved, but even as of last year, we estimate that the same ball contact would be reported 6 degrees higher in Detroit than it would in Colorado. Although most players will experience a variety of stadium environments, positive and negative, these are not trivial differences.

Having removed probable outliers, and modeled stadium bias for both launch speed and launch angle, we now consider their relationship with each other. Does a trend in one measurement tend to correspond with a trend in the other? Statistically speaking, the answer is almost certainly “yes,” and the implications underscore the importance of adjusting Statcast measurements for each stadium environment.

Let’s begin with the magical transition of Arizona, shown above, from being a massive positive outlier in launch angle through 2016 to a massive negative outlier beginning in 2017 and running through the present day. What changed in 2017? We don’t entirely know. Perhaps the equipment was overhauled. Perhaps the equipment was calibrated to take measurements the same way the system does in Colorado. As we discussed in the launch speed article, 2017 was the season Arizona introduced its own humidor for storing baseballs, and Colorado has famously had one for some time.

Here, though, we are talking about launch angle, not launch speed, and while humidors are associated with a reduction in launch speed, if the same effect exists for launch angle, that’s news to us. Nonetheless, Arizona’s average launch angle as of 2017 suddenly lurches in the same direction as the launch speed and goes from an extreme outlier in the positive direction (almost six standard deviations above the mean) to the most extreme outlier in the negative direction (about three standard deviations below the mean). The odds of that happening by chance are basically zero, and we can discern no science-based explanation for it either.

But what does it signify? One limitation of statistical assessment is that while we can often tell when something has changed, that doesn’t mean we can identify what the change actually was. What we can say is that at the same time massive change occurred in Arizona’s launch-speed measurements in 2017, a similarly massive change occurred in Arizona’s launch-angle measurements.

Arizona is the most extreme example of a curious connection between reported measurements of launch speed and launch angle, but it reflects a larger trend. After controlling for batter and pitcher identity, stadium launch-speed measurements correlate suspiciously well: 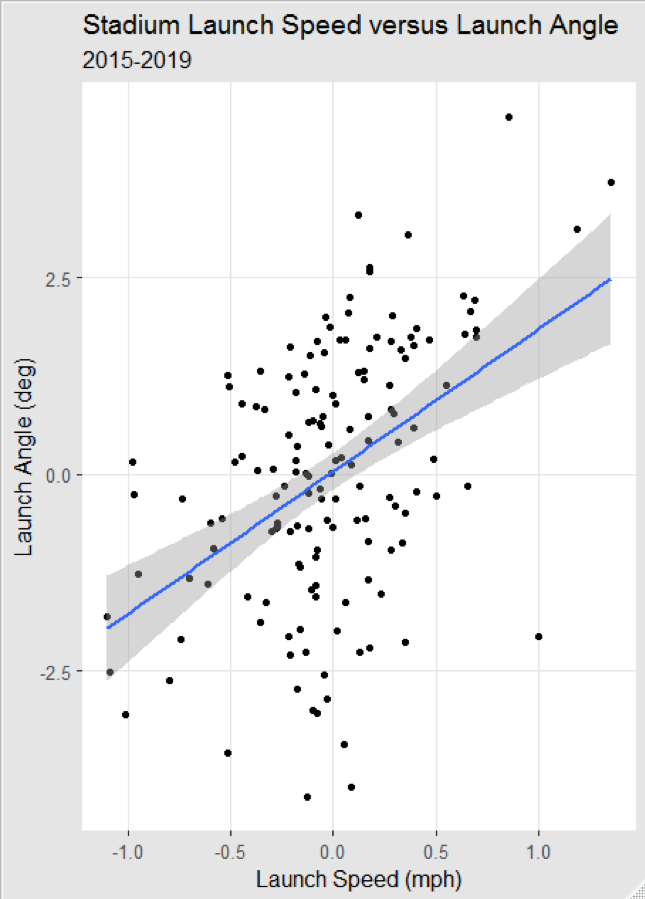 The plot above shows a linear fit with a 95 percent confidence interval.

As it turns out, launch speed and launch angle have a fairly strong connection almost everywhere. Although better hitters might want to hit the ball both harder and somewhat higher, and pitchers probably want the opposite, stadiums are neither hitters nor pitchers, and it is difficult to explain why this clear residual effect would exist short of system bias. Notably (perhaps), the slope of this connection declines as the years progress and overall deviation among stadiums declines also.

The takeaway for us, based on admittedly limited information, is that Statcast’s measuring errors for launch speed and launch angle tend to either compound one another or derive from a common source. Thus, stadiums which run “hot” are likely over-valuing both measurements at the same time, and the opposite is true of stadiums that run “cold.”

Has the League Changed its Approach to Launch Speed and Launch Angle?

We conclude by looking at whether major-league launch speed and launch angle have materially changed over the four complete seasons since Statcast was first introduced.

Here are the probable, average league-wide values that remain for the 2015 and 2018 seasons after removing what we predicted to be imputed values, and also adjusting for batter, pitcher, and stadium identity:

Launch speed appears to have gone down, if anything, but is probably more fairly described as constant.

Launch angle presents a more substantial question. Among the observations we used, the average adjusted launch angle across MLB has gone up, from just under 10 degrees to almost 10.7 degrees. Both distributions are approximately normal in the observation ranges of interest, so the change required to produce this result would be an increase of .71 degrees with a standard deviation of .63 degrees.

Because the average change exceeds the standard deviation, it seems probable that the observed change in launch angle is “real.” An analogous result can be derived from the other direction by looking at the overlap between the two distributions, which in our estimates appears to be less than 50 percent: another sign of probable difference.

Just because a change is real, however, does not mean it is meaningful. There was a spread of 179 degrees among batted ball launch angles during the 2018 season. Is 0.7 of a degree large enough to signify a meaningful change in league-wide approach? Possibly, although that sure doesn’t seem much. Likewise, is .7 degrees sufficient to demonstrate a meaningful connection to the latest home run surge? I doubt it, but perhaps others would argue differently.

Special thanks to Sean O’Rourke for assistance with trigonometry, which I despise.