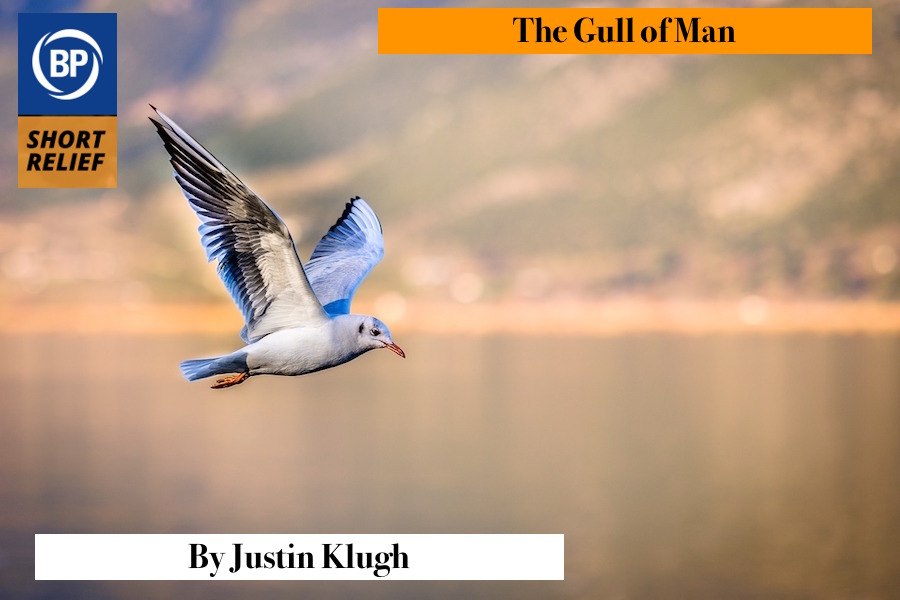 It was the end of the seventies in Canada, and the seagulls just weren’t right.

Lake Ontario, said to be the most polluted freshwater in the world in 1979, was warping its herring gull population. Pesticides and industrial waste in the region were dulling their parental instincts: They were abandoning their nests, laying fewer eggs, and most notably, slicing open the faces and heads of far fewer human researchers coming to check on them–normal gulls, according to a biologist with the Canadian Wildlife Service, were “known to lacerate the skulls of human intruders” with far more regularity and enthusiasm in the past.

Whatever was going on, it was, as most regional environmental concerns are, considered nothing more than the crazed jibber-jabber of teens wearing smelly bandanas. But when a possibly deranged seagull landed at Exhibition Stadium in Toronto four years later, it was all anybody could talk about.

On August 4, the Blue Jays and the visiting Yankees played a close contest; a 3-1 Yankees victory in which both starters, Dave Stieb and Shane Rawley, went the distance. But in the middle of the fifth inning, Dave Winfield trotted out to his position in center field and began warming up with right fielder Steve Kemp. As the bottom of the inning was set to begin, Winfield unloaded a throw toward the New York bullpen and accidentally brained a seagull that had landed between him and Kemp during their toss. It was killed instantly.

The Canadians blamed Winfield. Fans booed him as he shrugged, unsure of how he could be at fault. A shaken Blue Jays bat boy emerged from the dugout with a towel and solemnly placed it over the corpse. A groundskeeper arrived and removed it. After the game, Winfield was taken into custody and promised to appear in court the next time the Yankees were in Toronto, which wouldn’t be until the following season. He was let go with a $500 bond.

The Americans, of course, blamed Canada. Winfield called it “unfortunate,” but his teammates Graig Nettles and Goose Gossage found his treatment by Canadian law enforcement unacceptable. In fact, you’ll be surprised to learn that at least one witness believed that the seagull had been not right in the head when it had showed up in the first place, making Winfield’s execution an act of mercy; a concept that exists solely among humans, and never in gull world.

“The bird was screwed up when it landed,” Yankees coach Lee Walls told reporters. “This is an embarrassing day for Canada, that a player of Winfield’s stature be charged with cruelty to animals.”

And to this day, the war between the gulls and the humans rages on.

As the earth fractures under the weight of environmental cataclysm, the gulls are at peace. They do not fear the wind. They do not fear the rising waters. And as they become more of the twisted creatures that our chemicals have made them, we can only wonder: Perhaps if Winfield’s errant throw had not struck down one of their kind, they may have told us the secret to living on a broken planet. 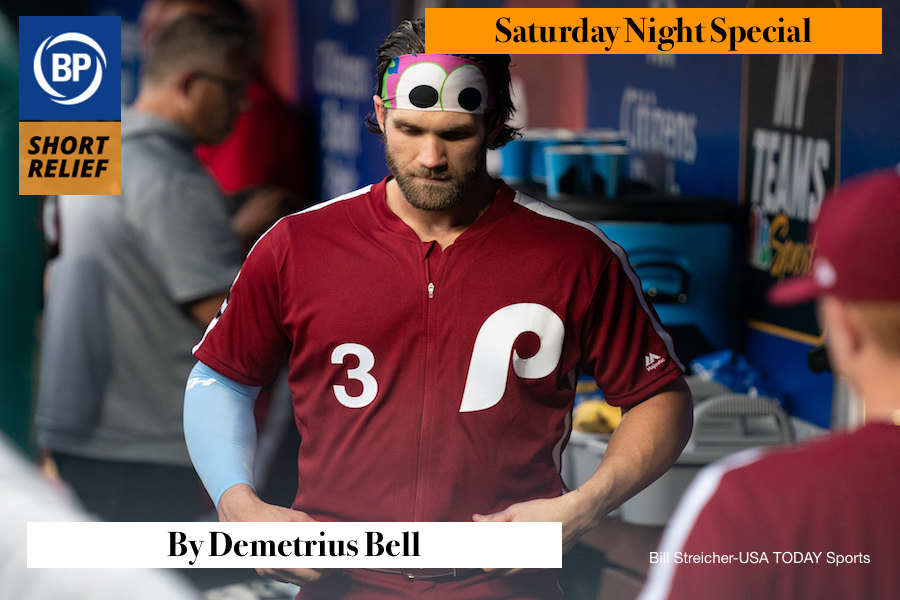 During the seventies, the Pirates and Athletics attempted to completely rewrite the baseball uniform rulebook forever. In Pittsburgh, they took the field in all-black duds. In Oakland, all-green regalia In both, all-gold garb. Those two teams led the way in what was an explosion of color across the sport. On May 19, 1979, it found its way to Philadelphia.

On that fateful evening, the Phillies kicked off what was supposed to be a season-long promotion where they would wear their “Saturday Night Special” all-burgundy uniforms. The players responded to this at first by verbally roasting each other as they put the uniforms on. Then they went out and lost 10-5 to the Montreal Expos. It wasn’t a special night, and rumor has it that the equipment manager took all of the uniforms, put them in a bin and sent them to a secluded place in Veterans Stadium where they would never be worn or seen in the public eye, again.

That was the case for 40 years, until Saturday. After the Phillies brought back their powder blue away uniforms from the past as an alternate uniform, someone must have looked at all the jerseys from back then and remembered that the burgundy uniforms were a thing. So on July 28, 2019, the Philadelphia Phillies took to the field at Citizens Bank Park wearing those infamous burgundy ensembles.

The players did not roast each other this time around, and there did not seem to be any sort of embarrassment. It even looked like a lot of the guys were having a good time zipping (yes, zipping) and suiting up in the dark-reds.

There’s cool, and then there’s @TheCUTCH22 in these throwbacks COOL. 😎 pic.twitter.com/7tETKTZnBy

The fun stopped there, as Atlanta jumped to a 14-1 lead in the 5th inning before the Phillies climbed back to only lose 15-7. That 10-5 loss all those years ago seems so quaint now.

There’s no word on whether or not the Phillies decided to revive the bin that housed the original burgundy uniforms and stuff the 2019 version in there too. It could be yet another few decades before we see the Phillies bring it back to be worn under the lights of a major league ballpark. Maybe in 2059, when the Phillies are taking on the 8-time World Series Champion San Diego Padres, the Phillies will wear the uniforms in an effort to shake things up a bit. 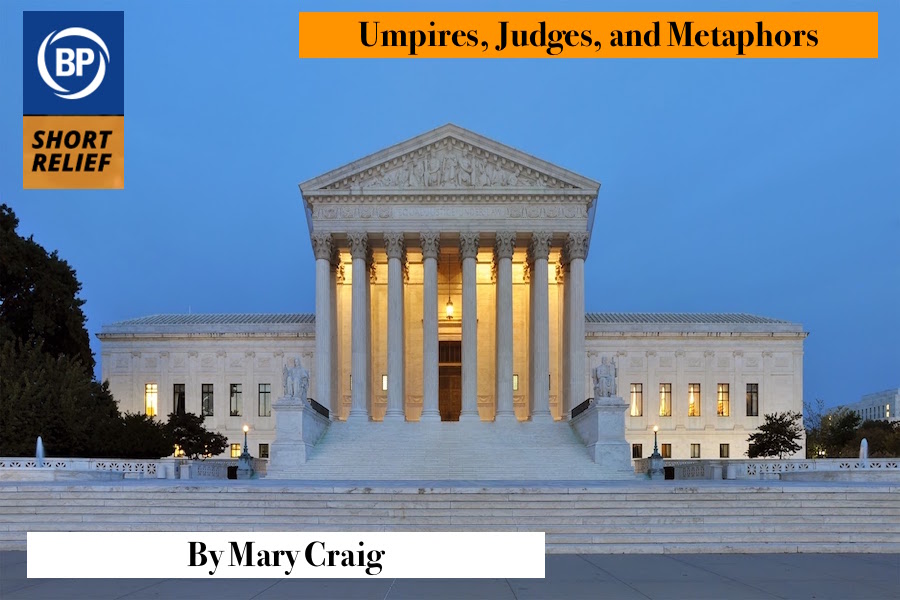 Though Major League Baseball in its history has had three cases reach the Supreme Court, the sport’s influence on the final arbiter of the law extends well beyond these cases. For decades, the Supreme Court has turned to metaphor in order to help explain its role in American government, relying often on the likeness between judges and umpires. Of course, no two justices have been able to come to an agreement on the nature of umpires or justices.

In writing the opinion for Richmond Newspapers, Inc. v. Virginia (1980), Justice Brennan rejected the long-standing notion that justices are akin to umpires. He asserted that “judges are not mere umpires, but, in their own sphere, lawmakers––a coordinate branch of government.” While both umpires and judges primarily deal with separate sets of individuals, the impact of Supreme Court rulings extends far beyond that of calling balls and strikes, meaning that

Conversely, in his opening statement during his confirmation hearings, Chief Justice Roberts argued that umpires and justices are very much the same. “Umpires don’t make the rules, they apply them,” he declared, adding, “the role of an umpire and a judge is critical. They make sure everybody plays by the rules, but it is a limited role. Nobody ever went to a ball game to see the umpire.”

Standing somewhere in the middle is Justice Kagan, who in her confirmation hearings stated that judges must be as impartial as possible and recognize their limited roles. However, she added, “[T]he metaphor might suggest to people that the law is a kind of robotic enterprise…That it’s easy, we call ball and strike and everything is clear cut that there is no judgment in the process. I do think that’s not right. It’s especially not right at the Supreme Court level, where the hardest cases go.”

Because of these ambiguities, many consider this metaphor incredibly flawed. Indeed, Justice Kagan’s revival of the metaphor led to many calling for judges to abandon it, for the love of God! And for the most part, these people are right. It’s ridiculous to base arguments for judicial activism or judicial restraint on how well one thinks one knows what umpires do in a game.

But in another bizarre way, the metaphor with all its ambiguity is perfect. It combines two fundamentally American things in a flawed, puzzling manner that leaves one less sure of one’s grasp on both judicial review and baseball. It incites argument, both serious and facetious. It offers a way for many of us to relate to the Supreme Court for a moment, to draw it nearer our realm of understanding. It reminds us that both umpires and justices at the end of the day are human beings, prone to error, and it is up to us to determine the degree to which we can forgive before we call for robots.

You need to be logged in to comment. Login or Subscribe
Cameron eadie
Of coarse Winfield went on to become a Jay and fan favorite. I took my daughter who was 5 at the time to some of the Dave Wants Noise series. Canadians who are usually subdued really made a ruckus . My daughter, from a quiet small town spend most of the game with her hands over her ears. Dave got his noise .
Reply to Cameron