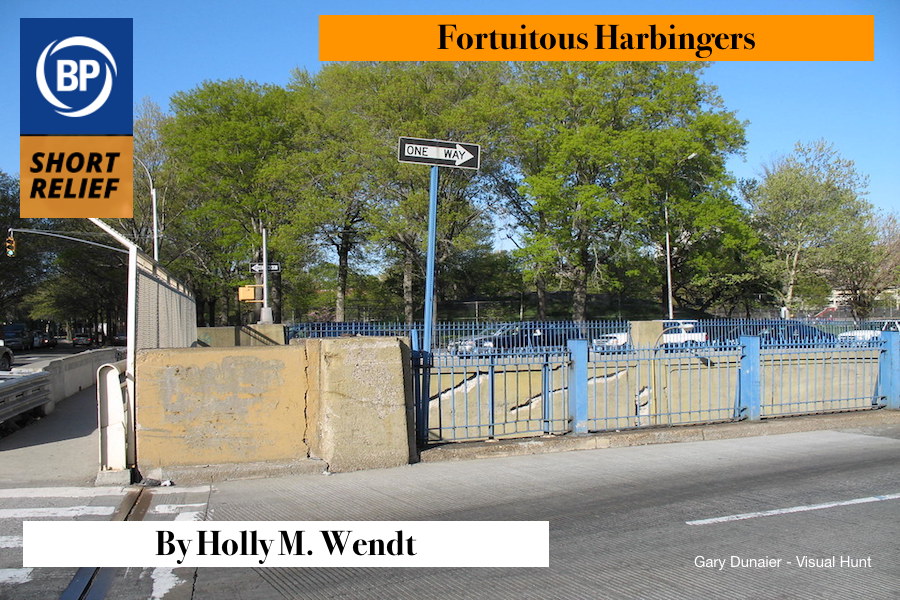 While I am well known as that person among my friends who has definitely not seen whatever show everyone else has been talking about for months, I have seen Good Omens, the Amazon Prime adaptation of the 1990 Neil Gaiman and Terry Pratchett novel of the same name. Both of these texts are quintessentially British things (a significant factor toward my enjoyment, along with cleverness and very good acting well peppered with witty repartee). Good Omens is also about averting the Apocalypse, and not in any kind of metaphorical fashion; an angel and a demon who’ve been on Earth since the beginning take it upon themselves to avert the end times, as precipitated by the 11th birthday of the Antichrist. Through a series of unexpected events, the Antichrist grows up in a perfectly mundane household in the sleepy village of Tadfield instead of being swapped for the child of the American ambassador (played to boorish perfection by Nick Offerman). And it’s at this moment that Good Omens, a show in which biscuits, ice lollies, and tea factor heavily, becomes a baseball show.

In greeting his newborn son, the ambassador says, “A boy! Mr. President, I have the honor, sir, to report myself the father of a regular Y-chromosome son…a male, boy son…I’m going to teach him to play baseball, and on Sundays, we’ll go fishing…”

It’s notable that this welcome to the world takes place via a tablet screen; the American ambassador is with the President instead of being present at the birth of his child, and the President calls him away from even that much attention, even before he can finish the sentence.

The implication: it’s not enough to be male (with regard to XY chromosomes and the physical accouterments expected to accompany said chromosomes); one must also be a boy, which is to say masculine in behavior, in hobbies, in accordance with a very narrow script of what both masculinity and Americanness are. And boys play baseball.

Because the show is a comedy, the ludicrousness dial is obviously cranked to eleven, but it’s an equation most of us are familiar with. As last week demonstrated, through so many testimonies to the presence of women in baseball, not to mention the many people who identify outside of the gender binary who love the game, who play it, who are shaping it, some of us are a little tired of that equation. Not tired of boys and men playing baseball, but tired of the suggestion that only boys and men play baseball. Tired of the suggestion that there’s only one way to see the sport, only one way to be in it.

Ashlynn, 7, was told that “girls shouldn’t be playing baseball.”

Good Omens does not come back to baseball, but the shorthand of the ambassador’s monologue—a certain kind of rigidity that, when paired with the combined privilege and absenteeism the ambassador’s character exudes, could indeed lead to disaster—is a warning. It’s hyperbolic (the extremity is built into the show’s concept – apocalypse! angels! demons! the M25 on fire!) and I’m definitely turning the screws on the script here, but the question of who is permitted entry into the kingdom of baseball is always on my mind. I wish it wasn’t. I’m thinking so hard of what is an aptly written, actually very funny characterizing moment in a show that has brought me incredible joy because baseball also brings me incredible joy, except for the times when it doesn’t. Except for the times the sport and its ambassadors seem more intent on slamming the gates closed than holding them open.

More Ashlynns. More joy. That would be, as a particularly English angel might say, tickety-boo. 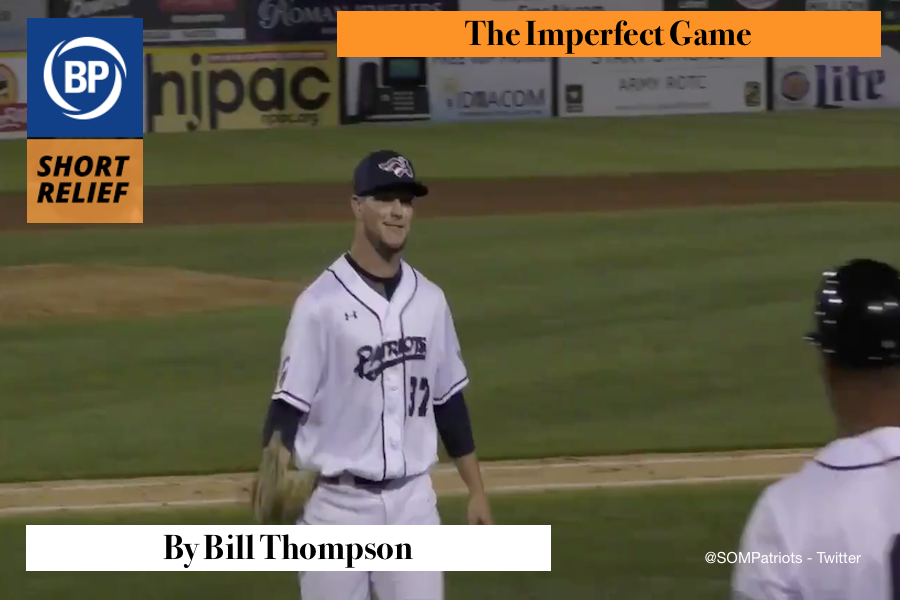 Rick Teasley pitched a Perfect Game, and then he didn’t. On Friday Teasley retired all 27 Long Island Ducks he faced. The only problem was the inability of his fellow Somerset Patriots teammates to score a run over nine innings. The Florida native was pulled before the 10th, and in doing so lost his chance at Atlantic League, nay, baseball perfection. But did he really lose his chance at perfection?

Ascribing perfection to teams and players is nothing new to baseball fans. It seems like we are always in pursuit of perfection of some sort. The Immaculate Inning, The Perfect Game, The Cycle, etc. Various feats have all been offered up as examples of baseball perfection throughout the years. Despite this, we all know deep in our bones that perfection in baseball is impossible. No inning is actually immaculate, no game close to perfect. Teasley pitched the game of his life against the Ducks, but even had his 27th out recorded been the end of the game, he wouldn’t actually have been perfect.

Pitchers throw balls, and thus they aren’t perfect. A hitter who goes 4 for 4 with four home runs still most likely swung through some pitches, losing his claim to perfection on the spot. Yet we laud these performances as examples of perfection, because the beauty of baseball is that it is not perfect. Baseball as it once was, is now, and will be in the future is a game with ragged edges and carved out holes that make the game beautifully imperfect. It is those imperfections that make baseball so grand. The warts on the face of it all give the game the texture it needed, and still needs, to connect with fans the world over. We embrace those warts and still try to make them perfect all the same.

Perfection will still be sought out. The Perfect Game isn’t going anywhere, nor is The Cycle, The No-Hitter, or The Immaculate Inning. We know that none of these are perfect, but we celebrate them because their imperfection is just like the game that we love. That love causes us to seek perfection where there isn’t any. We want our game to be beautiful so badly that we try to will it to perfection. Beauty is in the eye of the beholder, and the crooked imperfections of baseball lead us to see a wonderfully, amazingly perfect game in our mind’s eye. 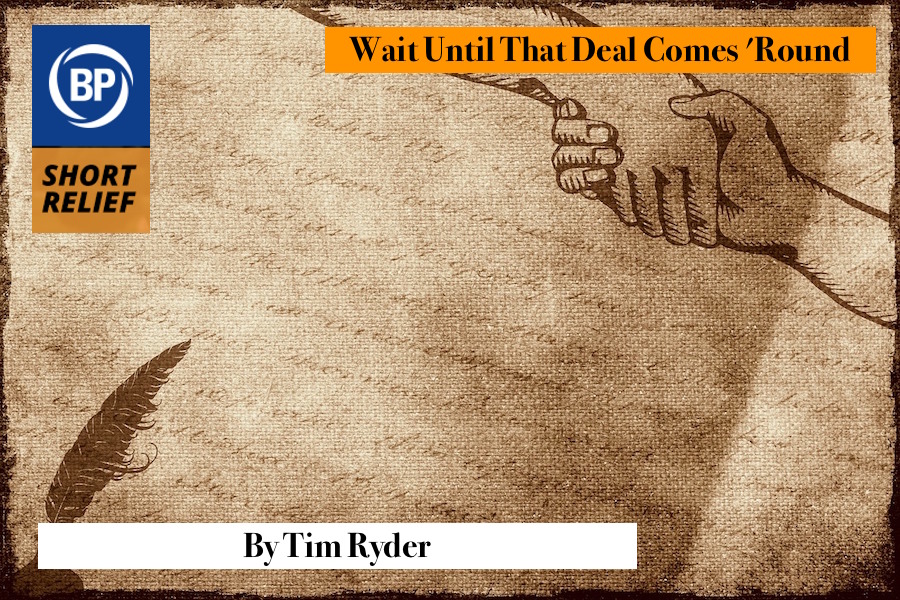 I wake up to music. It’s something I’ve always done and will always do. I woke up to some Good Ol’ Grateful Dead on Saturday. I wasn’t exactly in search of inspiration, but once in a while, you get shown the light in the strangest of places if you look at it right.

With Major League Baseball’s one and only trade deadline a mere 48 hours or so away, and all but eight teams in the game definitively out of playoff contention, there’s surely no shortage of internal “buy or sell” debate going on within front offices across the land.

The San Diego Padres are middling. With a healthy dose of young talent at the major-league level, as well as a proven superstar in Manny Machado in the fold long-term, a fast-track to prominence is within reach if general manager A.J. Preller is willing to part with a handful of significant cogs from his best-in-baseball farm system.

Do the Friars speed up the process by grabbing, say, just throwing it out there, Noah Syndergaard, from the Mets to head-up their inexperienced rotation in exchange for a small collection of blue-chippers? Or do they hold onto their elite cache of prospects and wait out their arrival?

Weighing the value of mortgaging away the future with hopes of bringing the heftiest of hardware home to your fans is an age-old dilemma that dozens of teams face every season.

Most teams are shaken awake from dreams of contention by the time August rolls around. But mirages of playing October baseball can be intoxicating. Organizations with aspirations of making those dreams come true will inevitably be faced with similarly tough decisions.

If Preller & Company are intrigued enough by the notion of making a bonafide run at the postseason before Syndergaard hits the open market in 2021, shuffling off a generous handful of San Diego’s primo stash of prospects to make it happen should be a no-brainer.

Having a solid plan in place to help navigate these hectic weeks is always prudent, and finding one’s self in the position of making a reactionary move just to make one hardly ever works out well. As the old adage goes, patience is a virtue. We shall see.

Sometimes, teams have to learn the hard way to let risky opportunities simply pass them by. The songwriters of “Deal”, Robert Hunter and Jerry Garcia, know what I mean.