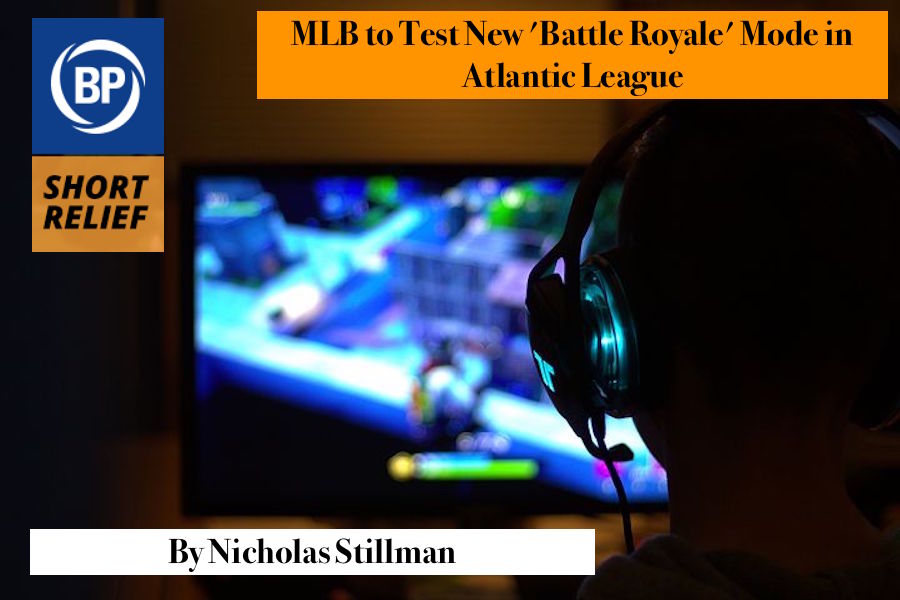 LANCASTER, Pa. — After successfully implementing the automated strike zone, the ability to “steal” first base, and several other rule changes into the Atlantic League, on Wednesday the MLB announced something more ambitious.

“We sat down in one of our brainstorming sessions,” said Jason Domo from the MLB Commissioner’s Office, who spoke with us through his Apple Watch this week. “This had to be hour thirteen of that meeting. We had big letters on the white board: How to Save Baseball. Absolutely no ideas. Then someone said, ‘Let’s just let the kids play.’ Simple as that. ‘Let. The. Kids. Play.’ I started thinking: Kids. Play. The kids play. Let.

“That’s when it hit me. What do kids like to play? Fortnite. Why? Battle Royale Mode. You better believe I was happy to finally get something on that whiteboard.”

The new game mode will mimic the popular online video game genre by moving in the outfield fences, mound, and bases after each inning. MLB explained it should work like a typical Battle Royale—each inning the stakes are raised as the environment closes in around the players, forcing them to adopt new strategies of play. They will attach wheels to fences, which players and grounds crew will manually roll to predetermined grooves between innings. For ease of moving the infield, the mound will be artificial and the bases magnetic.

The measurements seem to be the largest hurdle. The current maths, according to the MLB report, are ten feet of outfield fence movement for every half inch of mound movement. By these estimates, at the end of a nine inning game the fences will be ninety feet closer, and the mound and bases four and a half inches. When asked about extra innings, league officials said they “haven’t really thought about it.”

“The sport is trying to appeal to a younger audience, that’s no secret, that’s no lie,” said Domo. “My son, who plays video games all the time, he doesn’t care about baseball. Not interested in dad’s job. Not inspired. But you should have seen him perk up when I told him daddy’s idea. Suddenly he asks his mom if he can visit me, and not just every other weekend.”

When reached for comment, ALPB president Rick White responded: “You can just do anything, I guess. Move the mound back, move it in. Move the fences. Give us live shrimp instead of baseballs. I don’t really get it. I don’t know Fortnite. I don’t know, maybe this is good.”

When asked about other mainstays of the popular Battle Royale genre, no one we interviewed mentioned implementing randomized loot drops, or seemed to know what they were. 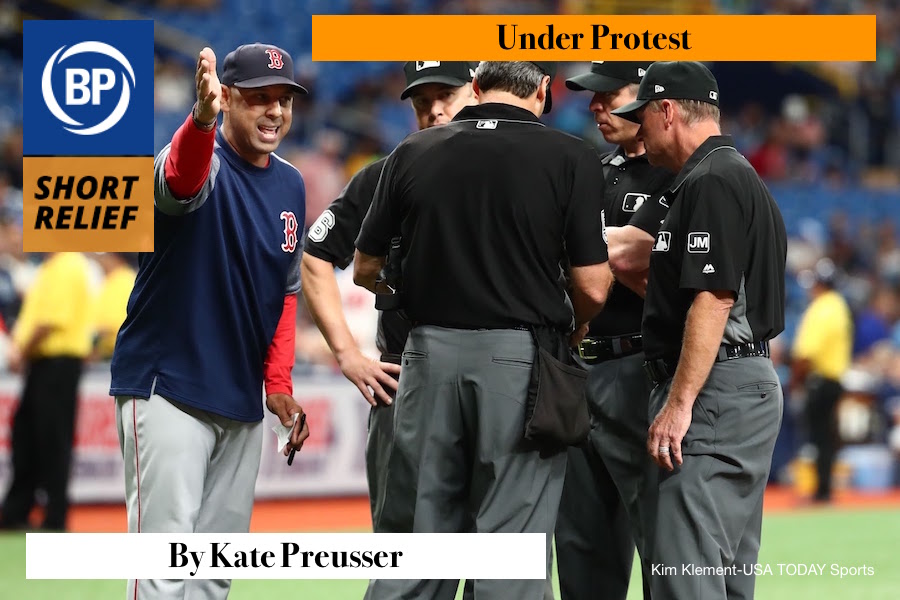 The Red Sox and Rays played a game on Wednesday in which the Rays did some tricksy substituting to maximize pitcher matchups, and the Red Sox did not like. The Red Sox moved to play the game under protest, which to the letter means MLB will review what happened, and if they rule in favor of the Red Sox, the game will be re-played from the point of conflict.

That almost never happens in actuality. The last time a protest was upheld was in 2014, when the Giants successfully argued that the grounds crew at Wrigley had improperly applied the field tarp, causing the field to be unplayable and the game to be eventually called in favor of the Cubs. Before that, you have to go all the way back to 1986 to find the last game where a protest was upheld. The low success rate doesn’t stop teams from protesting; this isn’t even the first protested game this season. In May the Cubs protested Nationals closer Sean Doolittle’s toe tap, namely because they felt their own pitcher, Carl Edwards Jr., had been subject to scrutiny for a similar motion earlier in the year. That wasn’t so much about the outcome of the game so much as it was about wanting clarification on legal pitching motions. Sometimes a protest is just about wanting to be heard.

Protests take place in baseball off the diamond, as you know. During a World Series game at Dodger Stadium last year, activists unfurled a banner reading “Trans people deserve to live.” An “Impeach Trump” banner appeared at Nationals Park after a game this season; a “Trump 2020” banner at Fenway Park. Banners protesting racism in general and police violence specifically have appeared, however briefly, at several parks over the past few years. Just this past weekend, banners reading “RickyRenuncia” were visible in crowd shots at Cooperstown, where many Puerto Ricans were in attendance to see native son Edgar Martinez inducted into the Hall of Fame. (“Ricky” refers to Ricardo Rosselló, the governor of Puerto Rico who made derogatory, inflammatory comments in text messages that recently came to light; his constituents are now demanding his resignation.)

The efficacy of off-field protests is similar to their on-field counterparts. In most cases, the banner is confiscated, and the protesters are escorted from the field, perhaps to face legal repercussions. In the governor’s mansion in Puerto Rico, Rosselló, who had promised to resign after being threatened with impeachment, bars the doors and sends out an armed guard. The Red Sox will in all likelihood not be given the opportunity to replay a game against a team they’re vying with for a Wild Card spot. What’s the point then, of protesting? Why endanger one’s safety or freedom? Why take the time to make a sign, to ask for a review? Why raise a voice if it won’t change anything?

Writing on protests for Time in 2017, Susanna Schrobsdorff acknowledges that protesting is hard. It can feel futile, fruitless, frustrating. It’s also necessary, she argues. “The motivators need bolstering, and the triumphs are precarious. And so the faith of the faithful is our best resource.”

The faith of the faithful is currently channeling through Puerto Rico, the home of Red Sox manager Alex Cora. They line the streets outside the governor’s mansion. 1800 miles away a sign held up in a tiny village in upstate New York captures and broadcasts that faith. Together, they demand to be heard.

Rosselló announced late last night he will step down on August 2. – Ed.