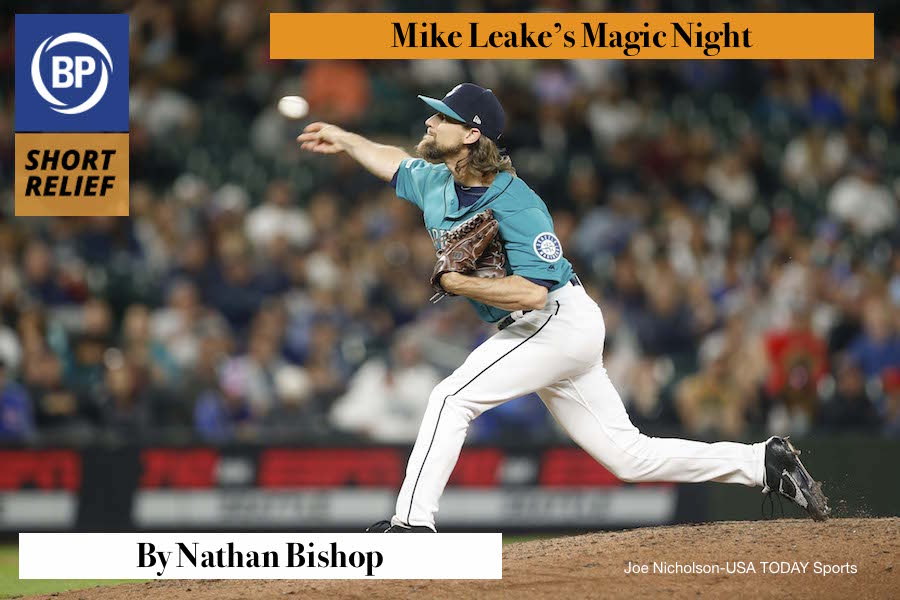 It is the top of the first inning, and Mike Leake is pitching for the Mariners. That’s a boring sentence. Mike Leake is a boring pitcher. Still, not long ago I would have been watching anyway. Instead, as Leake begins throwing his average stuff with average command against an average Angels team on a statistically average summer evening in Seattle, I’ve found myself in the low-ceilinged basement of a card shop. There are life-size figures of mages and wizards, fluorescent lighting, and over to the left some……papier-mâché terrain? I’m not sure what it’s for. My son says it is for “battles”.

We’re here for the weekly Magic: The Gathering tournament. I don’t play Magic. Or, at least I didn’t until a month ago when my son started to play. It is the kind of game you seemingly get into young or not at all, and while the various powers, special abilities, triggers, phases, and combos tend to avalanche down on my poor mid-thirties brain, I do my best. He loves it, and at his age, with middle school starting next year, loving something is important.

It is the top of the fourth now, and Mike Leake is still pitching for the Mariners. I’m sitting awkwardly in a corner by myself, watching Gameday on my phone, perusing a menu filled with luxury items like “Middle-Earth Sandwiches” and “Mordor Pizzas”. It’s a games store, and gamers love Lord of the Rings, you know? Leake is sailing through an Angels lineup that knocked him out of his last start in less than an inning, and my son is laughing and joking with his opponent, a man at least ten years older than I am. I hunch behind the phone, trying to not look too conspicuous. Looming adolescence makes my presence an embarrassment.

The tournament ends in the top of the seventh, with Mike Leake still pitching for the Mariners, and with damn Mike Leake throwing a perfect game. Baseball’s last Perfect Game was thrown by a Mariner, Felix Hernandez, seven years ago. For that I left work with my desk littered with important half-finished projects, found a bar, and drank and wept and screamed as the bartender looked at me with bemusement. Today, as Leake pursues perfection on the drive home, I keep it inside. There’s no room for baseball, because I am getting the full turn-by-turn breakdown of how a “Frenzied Raptor” was given “+4/+4” at just the right time with “Prodigious Growth”, and secured his victory over a lady named “Gwen”.

We’re at home now, and as the tale is retold in exacting detail to my wife, I sneak out to the back porch with a bluetooth speaker. It’s the top of the 9th, and Mike Leake is pitching for the Mariners. He is pitching a Perfect Game. No sooner is the beer cracked, and my butt in the seat than I hear the crowd groan as Luis Rengifo slaps a single through the hole at second. It seems crazy to have history thwarted by Luis Rengifo, but no less crazy then having Mike Leake on the doorstep of history in the first place. Remember that deep down we love baseball because it is, by far, the dumbest sport in existence.

The game is over now, and I head back inside. During a short pause in the tale of the night’s Magic duels, my wife asks me “Did he do it?” I say no. My son looks at me and asks “Did who do what?” I explain it. He listens carefully and then says “So he almost did something really cool but then didn’t?” “Yeah, man. I guess that about sums it up.” “OK well anyway so I was really struggling because my Skyknight had Luminous Bonds and then….”

I suppose it’s the kind of game you get into young, or not at all. 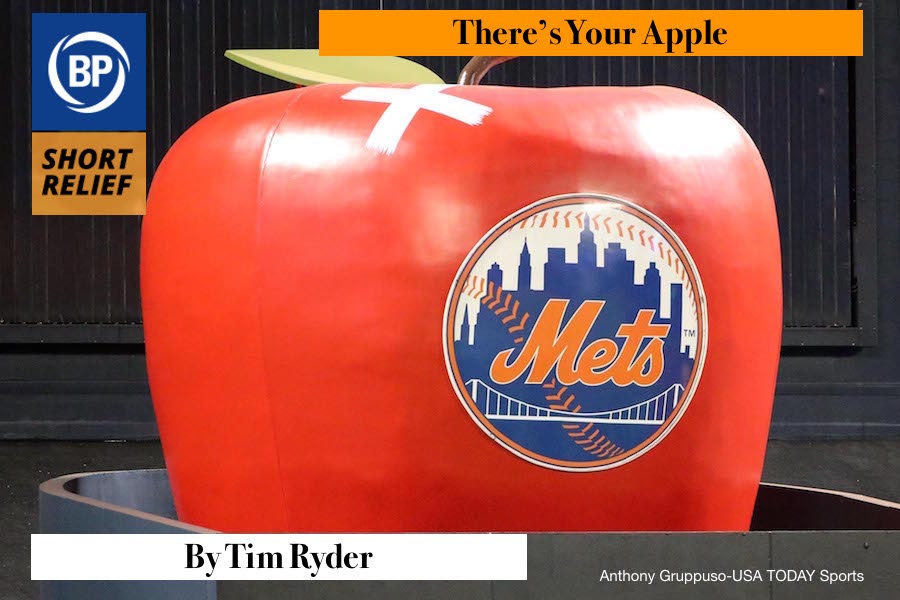 Tim Ryder: It’s the second inning, relax kiddo. Take the game in. Notice all the little intricacies. Watch how the defense shifts with each batter and sometimes with every pitch. Notice how well the pitcher hides the ball. Watch the guy in the on-deck circle getting his timing just right.

KR: But, like, when are the home runs? I’m here to see that apple. *points to center field*

TR: Ha, yes. Smartass. But that’s not what I’m getting at. Back when daddy was your age, in the magical year of 1997, home runs were all the rage. After the 1994 strike wiped out the season from August through the World Series –

TR: Yup, but I digress. So after the strike, things were bleak. Cal Ripken breaking Lou Gehrig‘s ironman streak in 1995 and the home run chase of ’98 pretty much brought the game back to life.

Turns out, the increase in home runs was heavily influenced by steroid use. Testing began, the game shifted again, and things reverted back to the norm.

Waiting on confirmation on whether Ripken was indeed a superhero; jury’s still out.

TR: Correct, but players using drugs to keep that wrinkle toward the forefront of the game isn’t good for anyone.

So MLB, in all their wisdom, decided to have the best of both worlds. After buying the company that makes the baseballs, the balls began to be produced more aerodynamically, and home runs started going up again.

KR: So they were smoother?

TR: You get it. The laces are less pronounced, so there’s nothing to slow it down as it’s soaring through the air. So, basically, MLB wanted clean players and more dingers. Mission accomplished. 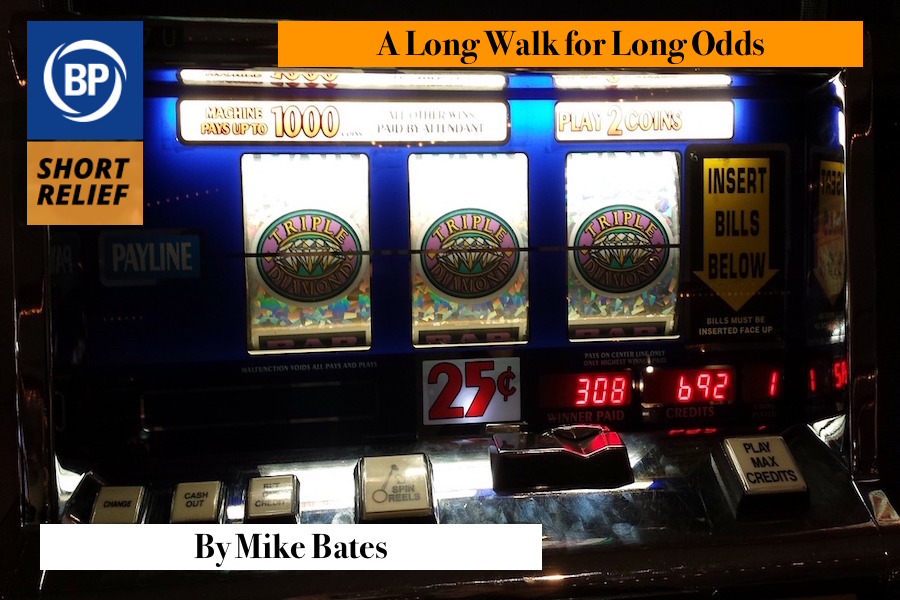 After the final pitch had been thrown on Saturday night, there had been 113,094 plate appearances in Major League Baseball in 2019. Of these, 9,588 had resulted in a walk, and 1,187 batters had been hit by pitches. There had been 4,067 home runs; 11 of those were of the inside-the-park variety. There were also 40 instances of catcher’s interference, which are not counted as “plate appearances.”

So one in three. Like the Red October’s chances of reaching the United States with all of the Soviet and American Atlantic fleets standing in their way. For baseball, that’s good. But in the real world, it would be alarming if two-thirds of us didn’t have a chance to succeed at the job we’re paid to do.

It’s more complicated than that, of course. I’m only looking at the outcomes, rather than the processes themselves. As we all know, there are three true outcomes, and batters actually have a chance of reaching base any time they put the ball into play. The probability of them reaching base changes drastically based on how hard they hit the ball, at what angle it leaves the bat, where the defenders are positioned, and whether they get a good jump on a ball in play. League-wide BABIP was nestled at .299 at the end of play the other day.

But even within the true outcomes themselves, there is wiggle room. Home runs in one ballpark are not necessarily going to be home runs in another, given the variability in fence distance and height, and the altitude at which batters are hitting. Weather too can drastically impact, from one day to the next, the chances of a ball leaving the yard. And even the 25,374 strikeouts in 2019 were not necessarily a true outcome, when some small percentage of those batters reached first after a wild pitch or a passed ball. There had been 55 of those, according to Martín Alonso, meaning even 0.2% of strikeout victims still got on base.

Indeed, it would seem that in baseball, everyone has at least some chance. Except, of course, for these two, who, according to one expert, have none:

Let’s all listen to @keithhernandez roast some bros on a boat. pic.twitter.com/Q9i5i5yi7X

RIP, gentlemen. Mr. Hernandez will see you out now.