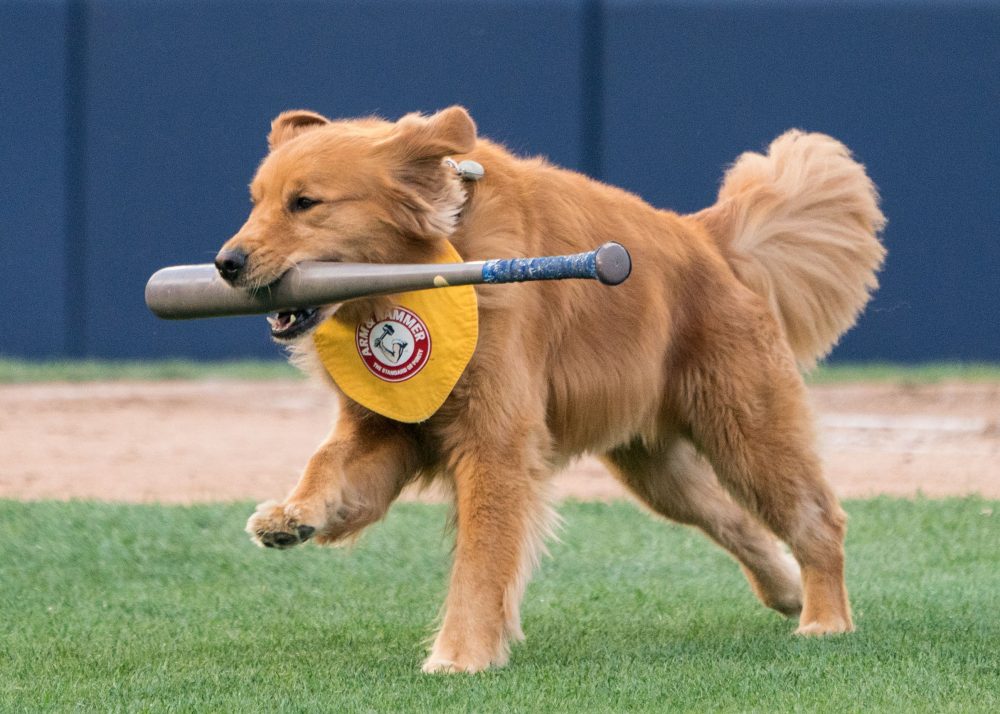 The Situation: Rookie is the goodest boy.

Background: Rookie, a Golden Retriever, was born on December 15, 2013. He was in a two-pup litter along with sister Mickie. He was named in a fan contest early in 2014, and made his pro debut for the Double-A Trenton Thunder in the 2015 season.

Rookie is a third-generation baseball pupper. His grandfather, Chase, was Trenton’s bat dog from 2002 until his passing in summer 2013. He was succeeded by Rookie’s father, Derby, who shared bat dog duties until he passed away early last year.

The Yankees teased calling Rookie up in April, but it turned out to be an April Fool’s hoax. They brought him to Yankee Stadium on Tuesday, following in the pawprints of his father and grandfather. Unfortunately for literally the entire world, MLB rules do not allow the use of bat dogs in major-league games, so he was only on the field for batting practice.

Scouting: The first thing you’ll notice about Rookie is that he’s incredibly fluffy. He is just a big ball of fluff. Incredibly pettable.

He has a long, graceful stride. His strong jaw allows him to pick up any bat, and he dutifully returns it to the dugout, often while wagging his tail. He does his job with verve and professionalism.

If there’s a weakness here, it’s the recognition and plate discipline. Rookie will sometimes chase out of the zone at balls that catch his eye. He’s improved at this over the years, and will generally make the plays at the position.

Now, the Yankees have added his powerful energy to the mix. He already spurred his hooman friend Aaron Judge to hit a go-ahead two-run homer on Tuesday following a quality series of pets. The Yankees already have the best record in the American League, but if they win the World Series this year, we’ll know who to credit: Rookie.

Immediate Big-League Future: Rookie is a present 80 OFP, the best bat dog in the world. But the Yankees returned him to Double-A Trenton after the game on Tuesday. He’ll be back available for fetches and pets starting on tonight’s homestand.

Fantasy Impact: Immediate add in all formats where he is eligible.

Baseball doesn’t always have to be serious. Sure, it’s an eleven-figure business. It’s also grown men running around a field of grass and dirt counter-clockwise hitting a projectile with a piece of wood while wearing pajamas. There should be room in the game for things that make you smile, even if they’re objectively silly. It is, after all, an entertainment business.

Rookie makes a lot of people smile. He’s a cute dog who hangs out at a baseball stadium. He plays fetch with bats during games. I’ve been going to games in Trenton for the entire time Chase, Derby, and Rookie have been doing the bat boy routine, and seventeen years later it’s still really cool.

We talk about ways in which baseball needs to connect to the younger generation. I’ve seen a whole lot of kids have little interest in the batter/pitcher matchup but tons of interest in the dog running back and forth in the first inning. Maybe that kid comes back next time and gets wowed by the game itself. It’s okay if they just want to come back to see the dog, too.

I’ve heard talk about how being around the bat dogs comforted players on a bad day, or reminded them of their dog from home, or whatnot. And if you look at the pictures of Rookie reunited with players like Aaron Judge and Gleyber Torres, you might even believe there’s some sort of fleeting competitive advantage here. But it’s good even if it only makes the hard minor-league grind just a little bit easier, too.

I smile when I see Rookie, too. I try not to complain about this job, because it’s one of the coolest things I’ll ever do, but I do have a day job, and am often at the park as part of a 14-to-16 hour day of work. Often, there’s a bunch of those days in a row for me. Seeing a friendly dog is just a nice thing.

We’ll return to your regularly scheduled prospect column next week. If you’re starving for info on players, I wrote something like ten thousand words for publication last week, and there’s a fantastic set of Notes From the Field up from our staff. But for today, we’re going to celebrate a Golden Retriever in this space, one that exemplifies the greatness of our game as much as any of us. Rookie is baseball.

You need to be logged in to comment. Login or Subscribe
Robert Murray
Awesome!
Reply to Robert
Shaun P.
Excellent reminder of the fun parts of the game!
Reply to Shaun
Jon Fishman
Best story of the day, by far.
Reply to Jon
Scott Jones
This was a fantastic column.
Reply to Scott
Matthew Gold
Is it possible that the column did not mention the dog days?
Reply to Matthew
Nicholas
Love this article! What a good boy
Reply to Nicholas
sbnirish77
He will be back up with the Yankees sooner than Clint Frazier !!!
Reply to sbnirish77