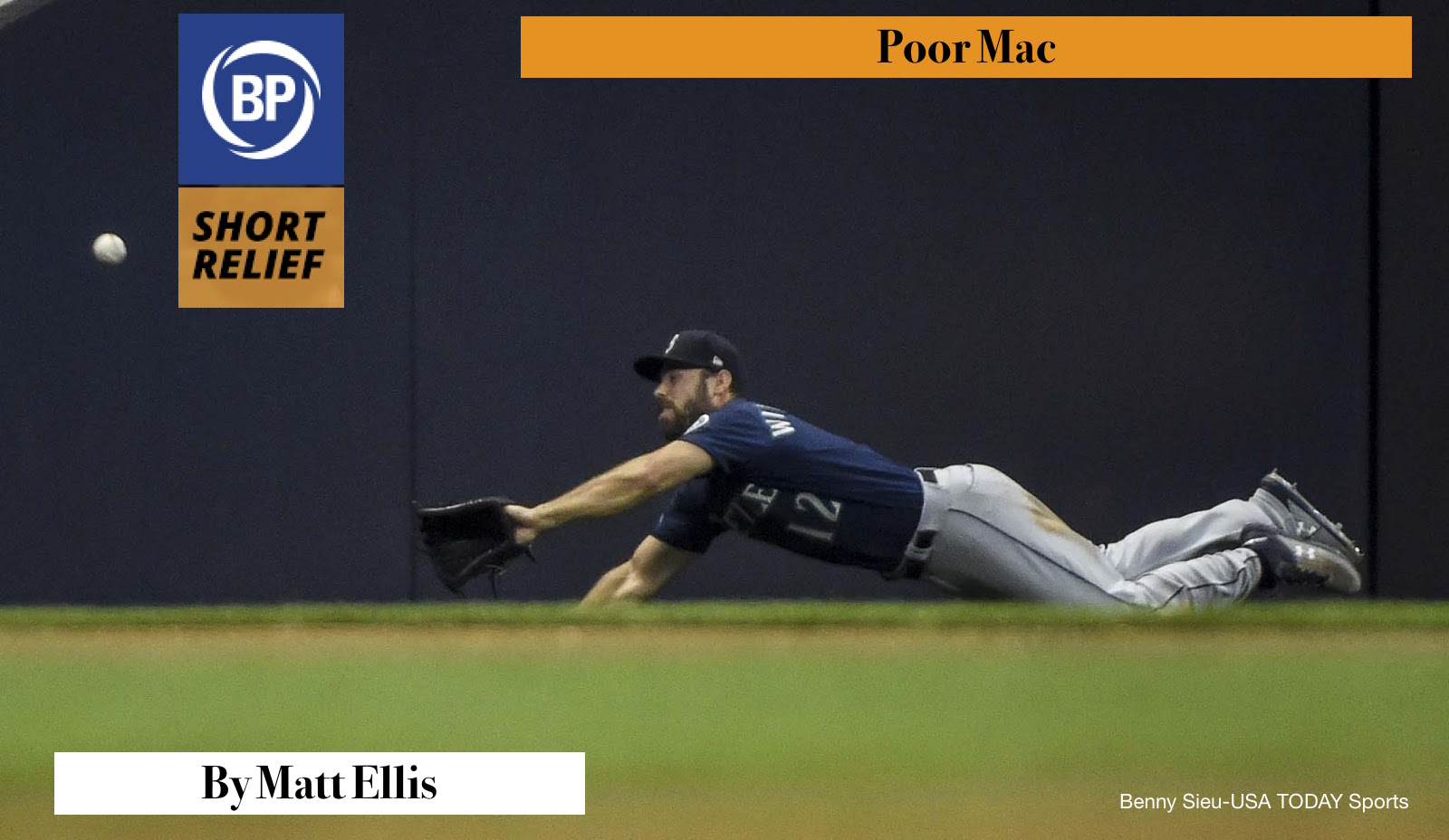 Marx once said, famously, quoting Hegel, that all historical events and persons appear twice – the first time as tragedy, the second as farce. It’s become something of a popular colloquialism ever since, and applied to various situations in ways both accurate and misleading. For Marx, it was the various revolutions, failed and otherwise, of the tumultuous nineteenth century. For cultural critics and your average thirty-plus-year-old standing in front of the marquee at the local cineplex, it’s “ANOTHER Lion King!??!!” Which is not to say the feeling is misguided–but rather that it says very little about why the first would be a tragedy, the second is a parodic farce of the first, and why there is such a mystery behind historical events recurring again in the first place.

Enter: The Seattle Mariners. On July 8th, 2014, the Mariners were eight games out of first place, but for the first time in what seemed like decades, they were nine games over .500, and in sole possession of the last Wild Card spot. After years of a seemingly failing rebuild, lackluster prospects, and a lineup the middle four spots of which were yearly staffed by various human embodiments of Warning Track Power, the Mariners, despite their best efforts, were in the hunt for October. Which is why it felt so strange that night to see the Mariners DFA their otherwise wholly inoffensive backup catcher, on his birthday, after a win. It was a move that was wholly defensible for various by-the-line baseball reasons, but screamed tragedy; waking up to an unintelligible historical event which very well could have changed the course of history altogether. The Mariners did not make the playoffs in 2014.

In the years since, the Mariners continued to make a respectable push for fall relevancy but repeatedly fell short, setting them up for the situation which would come to define their 2019 season: a true rebuild, a true trip into irrelevancy, a true dispositif of sorrow. So to find they DFA’d whatever a Mac Williamson is, in the midst of it all, is truly, perfectly, perhaps even better than the various global uprisings of the past four years, perhaps the most perfect embodiment of a tragedy turning to farce.

So to Mac, who we never knew: may you earn this moment in history as your own. And please, let’s let the third get on with it. 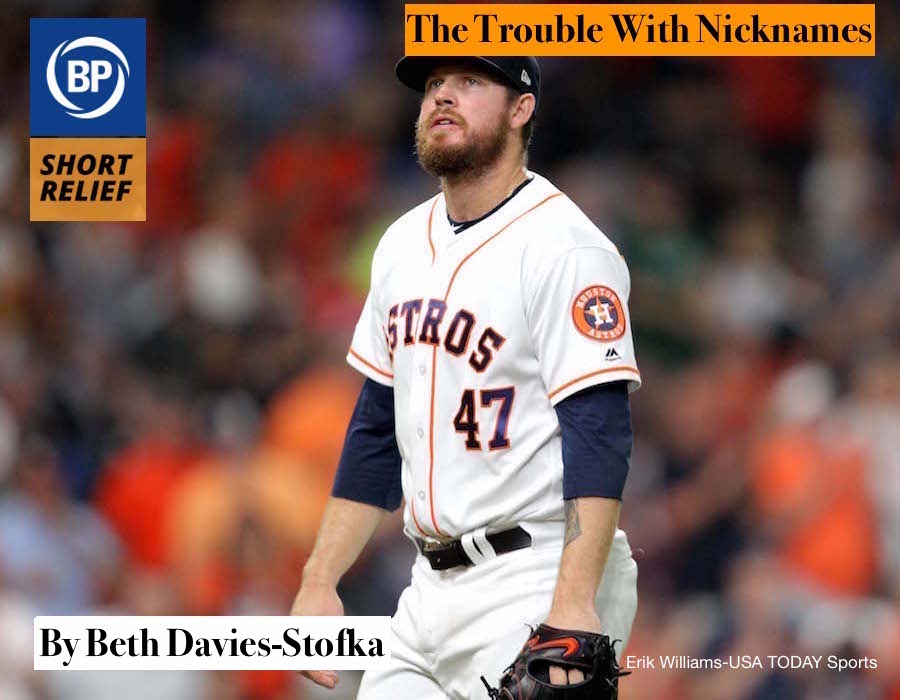 Inconsistency. Ugh. That is one of the worst words in sports.

It is also the best way to describe Chris Devenski. I hate it, because I’m very fond of him. Do you remember him? In 2016-2017, he was an adorably successful pitcher. He exuded youthful ambition. Through his changeup he said, “I’m valuable!” Through his flexibility he said, “I am unique!” Eager to learn, serve, and grow, he threw hard and worked harder. He embraced his nickname “The Dragon” with fire-breathing pitches, fire-breathing adrenaline, and a fire-breathing attitude.

Nothing about him in 2019 suggests fire. What happened? I think the problem is his nickname. When you are “The Dragon,” what are you? There’s no clear answer. The characteristics of dragons are inconsistent across cultures. Depending on where you are, they are associated with earth, water, fire, the seasons, astronomy, even trees. They are active creatures, always doing something, but that changes from culture to culture as well.

In some places, dragons are benevolent creatures, guardians and givers of life. When associated with water, they can bring thunderstorms to nourish the crops, or lead raiding parties from the prows of Viking longships. When associated with the sky, they can be harbingers of the end of hibernation and signals of the coming of spring. From their heavenly homes in the constellations, they can oversee the doings of rulers and send eclipses and comets. In the most dramatic cases, dragons manifest the gods themselves, ruling over all creation!

Dragons can also be fiery and destructive serpents. They can be selfish and cruel, hoarders of treasure and wealth. They have been known to kill a man who tries to pilfer a single golden cup (even though that man’s motives are pure). They can be harbingers of chaos. They come from chaos and they can bring it any time. And yet they can be tamed, becoming the playmates and intimates of children and warriors alike.

And yet, dragons can be weak. In fact, they can be slain. When Devenski embraced his nickname, it must have been exciting to take the mound as a fire breathing monster. But when you are the monster, you are not the hero of the story. Worse, when you are the monster, the hero will defeat you. As a dragon, you can be as competitive as anyone, show up fully prepared, and give your all in battle, but inevitably Beowulf will come along and split you down the middle; even if it kills him.

Devenski needs to get out ahead of this identity crisis, and fast. He needs a new nickname. His alternate, Devo, is unsatisfactory because it hints at devolution. No, Chris Devenski needs a nickname that epitomizes consistency. In other words, he needs Sandman. Maybe he should reach out to Mo. 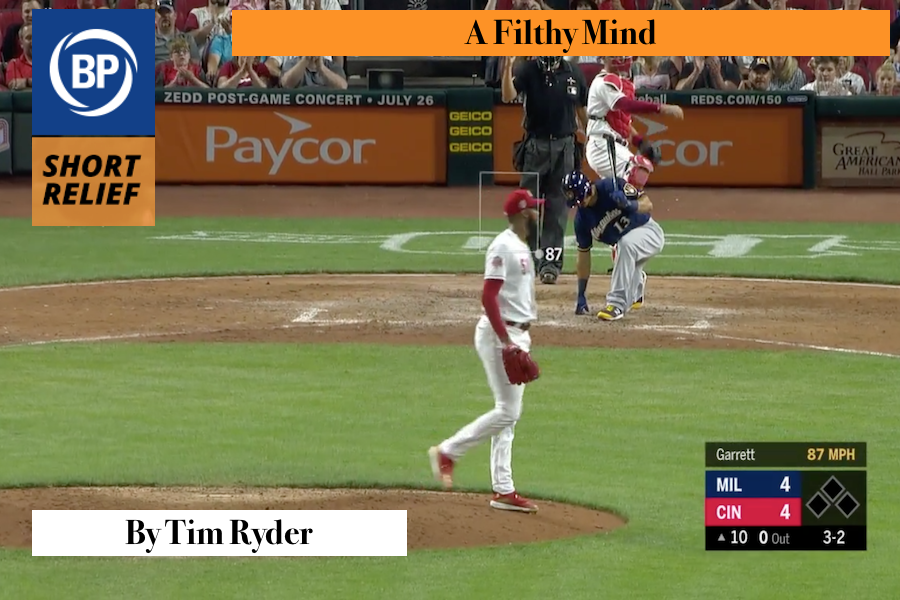 Nothing quite stirs my drink like a darting two-seamer on the black, a back-door slider that moves as if it were on a track, or a knee-buckling 12-to-6 curve that falls in for a called third strike.

The alloyed look of frustration, disbelief, and awe in a hitter’s face as he trudges back to the bench always brings a smile to mine.

Whether a hurler stares daggers at his opponent as he slinks away or simply refuses to acknowledge his fallen adversary — that’s my swag, sir, and you’ll get none of it — the ever-present overabundance of “come and get it” confidence brooding 60 feet, six inches away is alluring.

To me, a guy firing in heat and sliders the entire at-bat, only to drop a splitter on an unsuspecting foe and watch his entire body follow the ball as it falls off an invisible table seven feet from the plate is exactly what this aspect of the game is all about.

Don’t get me wrong, watching ballplayers turn a 100 mph pitch around on a dime and send it screaming 400-plus feet in the other direction is exhilarating.

But witnessing a professional baseball player flail helplessly at changeup that took the exact same path as the last three four-seamers he saw just does something for me that few at the plate ever could.

A childhood filled with the likes of Gooden and Cone hooked me. Spending my formative years in the television-aided company of Maddux and Pedro reeled me in. Today’s game is like a goshdarn carnival for the pitching-crazed.

And despite unnamed forces’ efforts to tilt the scales back in the favor of hitters — another discussion for another day — these major-league mound bullies aren’t backing down.

Slider ain’t sliding like it used to? Pop flies landing five rows deep? Adapt and adjust. What else can you do?