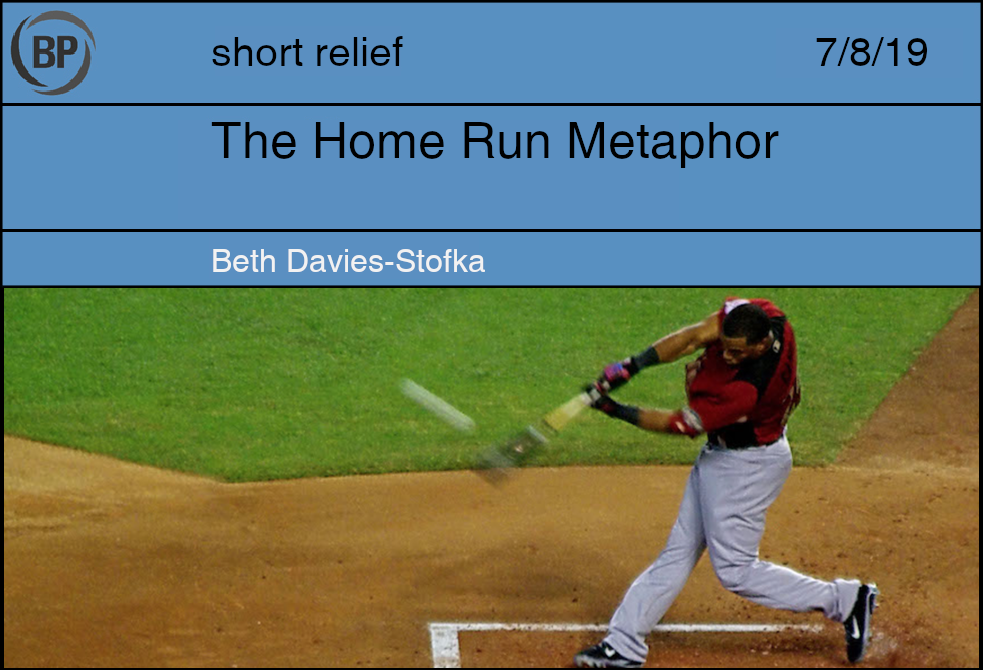 I love these words, but I hear them a lot. So I created my own list of home run metaphors, fresh and new. For my source material, I turned to the novellas of E.T.A. Hoffmann. His playful, early-nineteenth-century romantic fantasies are packed with expansive and intentionally silly overstatements. They’re like random metaphor generators for home runs. Here’s a preliminary list of ideas, drawn from Hoffmann’s novella Princess Brambilla (1820).

A home run, that is, a melodious sound from a good bat, is:

A home run is a ball that instantly grows a pair of wings; it blazes, unrestrained, paralyzing the mind, ablaze with rapture, exuberant, valiant, menacing, ardent, lavish, and bewildering. It is a ball that suffered a palpable hit and, after proudly taking its ease in the lights, now floats in a heavenly realm.

Conversely, a ball that drops in the outfield is a graceful leap made in vain. If it’s the ball that stays in the park and eliminates the hitter from the competition, then it is a piercing agony of unutterable pain. It withers and whimpers in an agony of death. An agony of death! I think I’m all set with the hyperbole.

Princess Brambilla is set during the Carnival in Rome, which at the time was one of the most important events of the year. In Hoffmann’s hands, Carnival was “a farcical comedy directed from the deep darkness of the wings…a merry world of jubilation in all its pleasure, splendor, and magnificence.” The Home Run Derby’s religious and cultural importance does not mirror Rome’s Carnival, but the spirit of jubilant pleasure persists. Eight athletes competing, and me, eight years old again, living a rapturous dream. Oh, and citing her source: 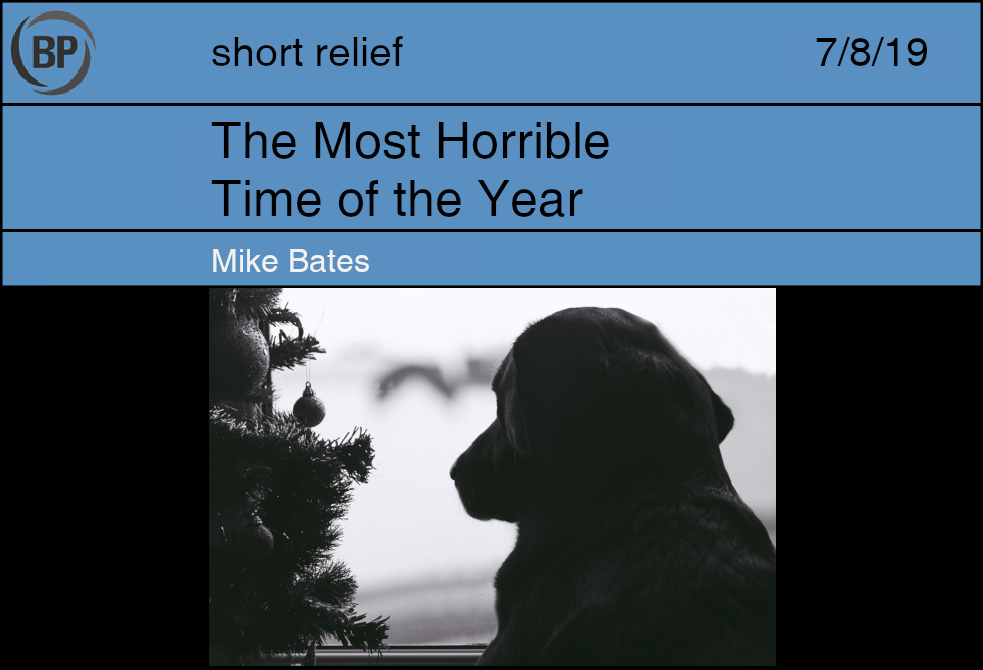 Following closely on the heels of two weeks ago, when I was excited for the best few days of the year, here come my least favorite.

I can feel them approaching. Slouching toward Cleveland to be born.

Two days of purgatory, poised between heaven and hell and unable to see the face of God.

They are the two days after the All Star Game. Days when almost nothing will happen. We’ll be stuck between the first and the second halves of the season. We’ll be waiting for the pennant races to begin in earnest. Waiting to feel the trade deadline, this year a true deadline for some reason, bearing down on us. There are no games on Wednesday. There is one game on Thursday. We will be living, briefly, in a formless, baseballless void. It will be utterly boring.

It’s on days like the ones upcoming when I think back to the words of Emil Cioran, as probably provided to us once upon a time by Carson Cistulli, “No one can enjoy freedom without trembling.” During the baseball season, I don’t have freedom. I have baseball. It demands that I watch it and I do. The routine is comforting. It’s soothing.

But after the All Star Game ends, and the players go home, we will have a night free. And then another virtually free. But I don’t want this. I want my structure. I want my routine. I have come to need it. Like a toddler, I want my binky before I agree to go to bed. I want baseball to tuck me in and read me a story.

But we will not have that. Not on Wednesday and Thursday, at least. We will be cast adrift on our own. Like you, I will have to decide how to spend my night. And it’s the choosing that fills me with dread and anxiety, because I could choose wrong. Whereas baseball? Baseball is always right. 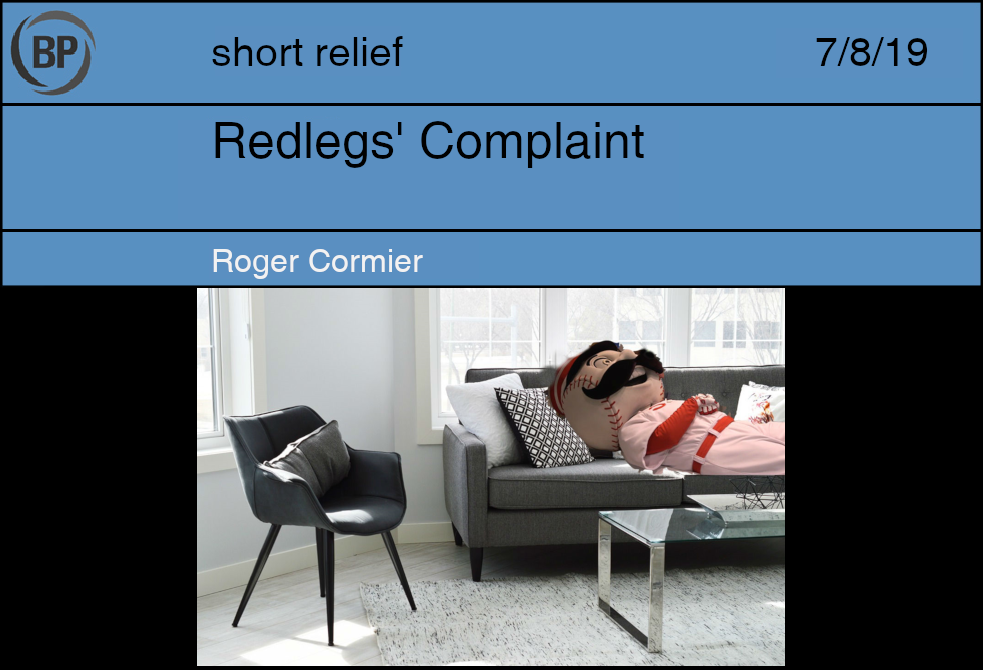 Mr. Redlegs plopped down on the couch. He had no time for idle chatter.

“The world wants me to forget. ‘It’s the All-Star break,’ they say. I want to forget. I can’t. Look at the size of my head. Many lifetimes of memories can be stored in this bad boy.

“We lost to the New York Mets on a Thursday. It happens. The way it happened is what bugs me. Noah Syndergaard threw a complete game shutout against us. In 2019. Went nine innings. He hit a home run too. The home run was the only run of the game. No pitcher did those two things in the same game since 1983. It was also against us.

“So we called up the kid, Nick Senzel, the next day. Good vibes all around. We were back home. The chili? Chef kiss. Don’t have to say anything more. We were up 8-0. Friday nights don’t get better than that! There was some fight in San Francisco, so we had to make it 10-3. And then we lost 12-11. In 11 innings! So the torture was extended, almost into Saturday.

“We won that Saturday. 9-2. Whatever. Another of the lord’s ‘hilarious’ tricks. Everything will be fine, right?

“Not right. Sunday we hit three home runs in the first inning, on back-to-back-to-back pitches. I must admit I went pretty crazy. Not Derek Dietrich crazy mind you, but crazy all the same. I didn’t wear eye black mustaches and play in that mustache for an entire game, is what I mean. Who does that? Someone fun, that’s who. Good vibes on a Sunday, what’s better than that? Nothing, that’s what.

“The Monday was no picnic. There were bees. Bees! I get it is our 150th anniversary and we are trying to celebrate all that came before us, but I didn’t think we would replicate the two previous times we were delayed by bees. Hey did you know we went 58-50 lifetime against the Boston Bees? +41 run differential, thank you very much. So we used to be able to handle bees. But we never learn about actual bees. All three times we had a bee problem we had to rely on paying customers happening to be in the ballpark at the time to handle it. Can’t rely on Tony Kubek that’s for sure. Did you know he was there when it happened in 1976 and all he did was watch other people handle it from his cushy announcer’s booth for 35 minutes, doing nothing, even though he “makes a hobby in bee-keeping”? Hey Kubek, NBC Games of the Week back then always had an alternate game to throw to if crazy delays like this went down! You weren’t even on the air!

“We won the game 12-4, but nobody was talking about us. It was about the bees, and the Panda. Pablo Sandoval hit a homer, stole a base, and tossed a scoreless inning, Second player ever to do that. Of course he did.

“Then we flew across the country to Oakland for the Tuesday game. Lighting delay for almost two hours. Then we got no-hit! No freakin’ hit!

“There was no delay on Wednesday, thank goodness. Game only ended at two a.m. Cincy time because it took us 13 innings to lose. Least painful of all, somehow.

“My life is a waking nightmare, with constant reminders of my shameful past. I keep seeing Marge Schott’s dogs in my dreams plotting to poop on me. Then they turn into pandas but continue to defecate like dogs. I think it’s because I don’t know what panda poop looks like. Please doctor, help me.”