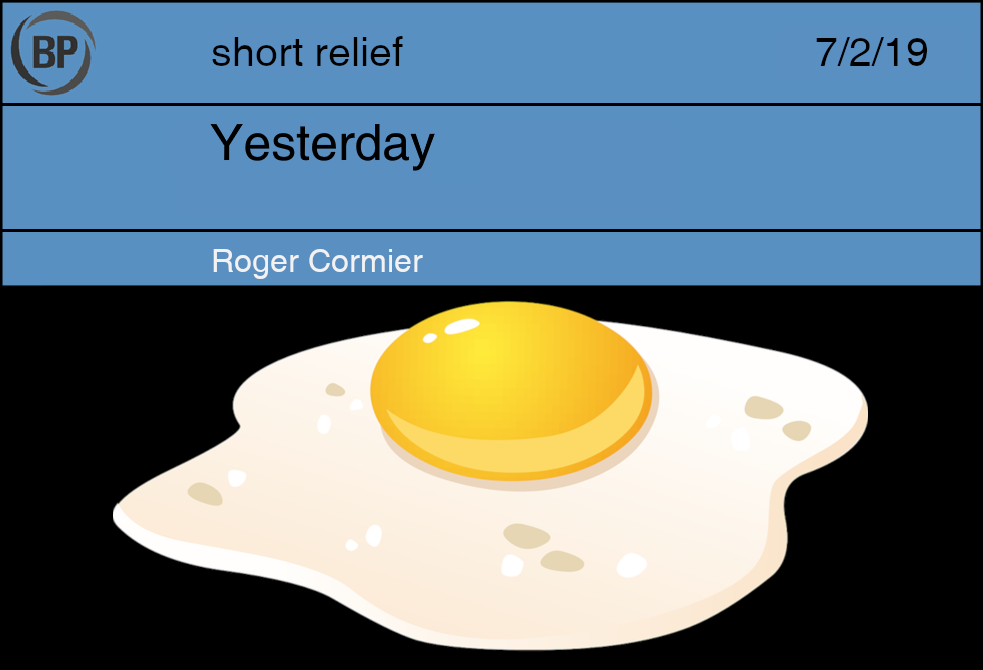 The damn stove wasn’t working again. I hate having to light a match to fix it. I’m afraid I’ll burn myself and then have to explain to people what happened. It had become very important to me that on weekday mornings I have a breakfast of eggs and coffee, and in order to cook the eggs I need the burner to light and, you know, burn stuff. A daily routine is something I’ve grown to appreciate more and more, and when life once in awhile laughs at my precious schedule I don’t handle it well, and then I feel shame, and the day is ruined.

Not to mention that the previous Monday the stove would not cooperate, so this wasn’t an isolated incident. That Monday was awful. After I was forced to skip breakfast I was accosted by someone trying to sell me a phone case at the library, and then I passed by the new pharmacy and its sign promising they are equipped to take photos for my passport, and I didn’t go in and ask for specifics even though I need to renew my passport, and I still didn’t know why I was avoiding this, and there was that shame again, and then in the gym a young man decided to take pictures of himself right in front of my locker, and after I patiently waited for him to finish he asked me to move because I was in front of his locker, which it turned out contained exactly one (1) skateboard and nothing else, and then somehow we walked out together and started to walk (he was carrying his skateboard) in the same direction, me silently furious and big time hating my fellow humans, while he racked up Instagram love.

This Monday was just going to be a repeat of last Monday. No doubt about it. July 1st is Bobby Bonilla Day, after all, where the Mets are a joke even though most teams defer money to players until years that seem impossible to even fathom, and the move inevitably led to drafting David Wright. (Everything else the Mets get made fun of is fair.)

In defiance I finally walked into that pharmacy and asked about the photos (they’re cheap but not suspiciously cheap), and I came home and checked the news while I contemplated when the other shoe was going to drop.

Angels statement on the passing of Tyler Skaggs. pic.twitter.com/6XA2Vu1uWV

Yeah, that shut me and my brain the hell up. 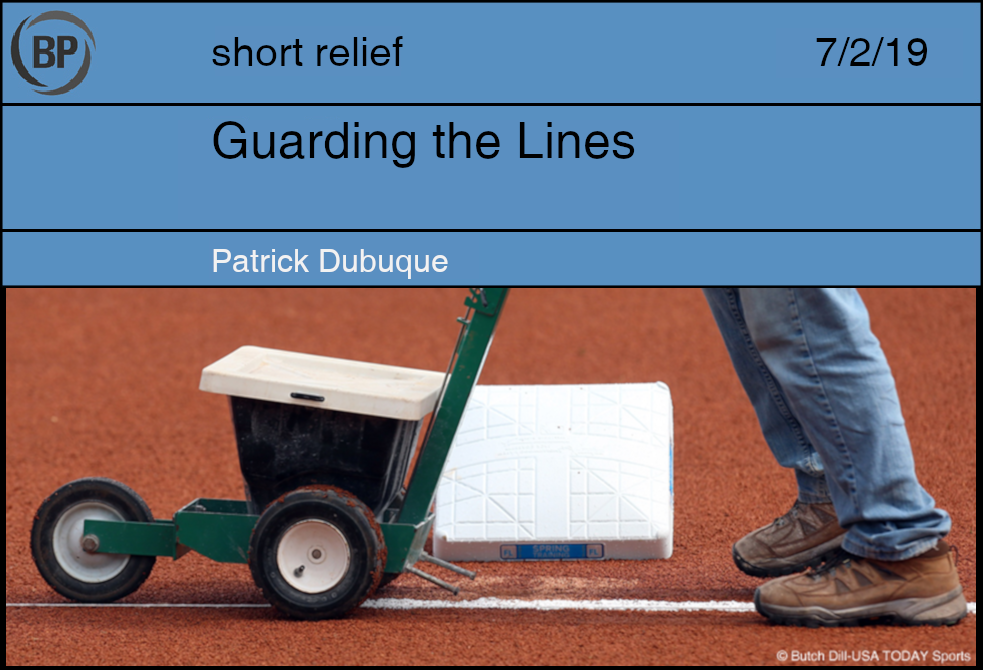 One of the most attractive aspects of baseball is the diamond itself. As a boy I loved the fresh, straight chalk lines that stretched far beyond where I could hit, trace paths around the bases I hoped to steal. I loved the right angles and the perfect curvature. But there were other lines as well: the rules themselves, the patterns, even the numbers that instilled that sense of predictability in the game, the order. Baseball was the opposite of that empty green not-city; it was pre-designed, well-planned. Everything made sense.

Fifty-five years ago the French philosopher Jean-Paul Sartre did something that did not, at first blush, make sense. He was awarded the Nobel Prize for literature, the highest honor for his field. He rejected the honor. “A writer,” he explained in his response to the Swedish Academy, “should not allow himself to be turned into an institution.” Sartre understood, earlier than most, the power of brand politics. “If I sign myself Jean-Paul Sartre it is not the same as if I sign myself Jean-Paul Sartre, Nobel Prizewinner.”

The decision is the natural conclusion of Sartre’s personal philosophy: that each person is free, and that freedom is, at its root, terrifying. I myself am terrified by it. His logic is that we are all our own masters, which sounds appealing; it also means that the person next to us is, too, which is less thrilling. We all, in our “free” societies, elect to trade some of our freedom for the sake of security. Sartre is fine with this, pragmatically, but he believes that such actions are in what he calls “bad faith,” in that we feel compelled to do so but only feel that way because it relieves us from the burden of being truly responsible for ourselves.

As much as I adore the hard-nosed, stubborn existentialism of my father’s generation, I struggle with this extreme. It sidles a little too close to anarchy for my tastes; I prefer the thoughtful, public service-oriented democracy that held sway on our side of the Atlantic around the same time. It’s particularly challenging when that personal freedom runs up against the common good, like when the cook at the local deli engages in their freedom to not wash their hands.

Sports are the opposite of freedom. Men wear the shirts of corporations, act only in prescribed patterns, designated by rule and custom. Their accomplishments are numeric, quantifiable, the artistry wrung dry. Sartre would consider them the perfect example of bad faith actors, men pretending to be something else. I can’t be that pessimistic. Rousseau thought us better off in the trees, stripping off the uniforms and probably the underwear as well, discard the society that ruins us. I tend to think the opposite: that the ability to pretend, to conform ourselves to the shape of baseball (and democracy, even against our personal interests) is a virtue. That we can act against our own nature, and follow the rules, is something worth celebrating.

Maybe that makes me the pessimist. I’ll make sure not to accept the Nobel Prize until I figure it out. 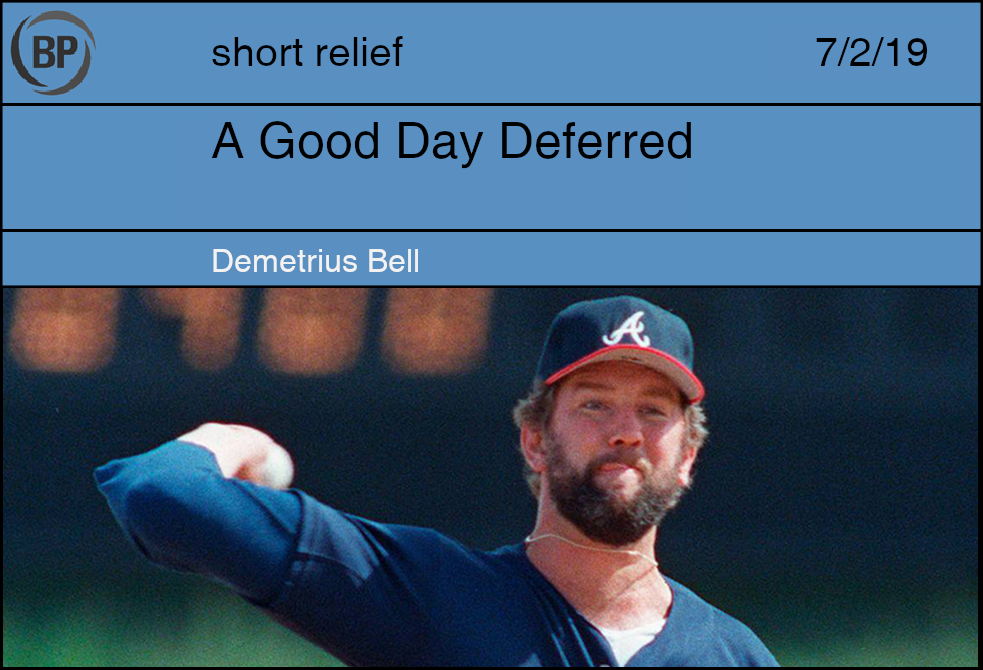 A couple of weeks ago, I had to run an errand after taking a visit to the doctor. This involved me going across Metro Atlanta, returning to my house to put something that was time and temperature-sensitive into my refrigerator, and then running right back out of the house in order to complete the errand. Lyft and public transportation are currently my two main ways of getting around, so sometimes it’ll end up being an entertaining ride to and from my destination.

This particular time, it really was a fun ride. The Lyft driver was an aspiring comedian, so he was cracking jokes the entire trip. It was a 20 minute ride with traffic, and it was probably one of the most pleasant rides I’ve had for a while. Once he dropped me off, he wished me well and it was a pleasant way to start doing what I had to do.

Unfortunately for that particular day, I was unable to get it done. That’s because I managed to stumble upon a place that doesn’t take cash. This was also the rarest of rare days for me, since I only use cash once every February 29. The one time I actually needed to use cash, I end up in a place that’s solidly operating in the 21st century by only taking credit or debit. So I had to postpone the errand within minutes of arriving there, and it was time to go back home.

This was also a rare day in another way. It was 75 degrees and barely humid on a summer day in the South. I would’ve been foolish not to take advantage of that, so I took advantage of it. I walked a mile to a restaurant, treated myself to a meal outdoors and then kept on walking around the area just to enjoy the weather. I’m not a huge fan of being outside unless there’s a bat and ball involved, so it was truly a beautiful day. Eventually I got tired, caught a Lyft back home and enjoyed the rest of my evening just messing around and watching the replay of the Braves game that I missed that afternoon.

If it sounds like a mundane day, then you’re right. It wasn’t really one of those super special days that you’ll remember for the rest of your life. I wasn’t pulling a Jack Bauer and having an insane 24-hour period. The point is that even a somewhat boring day is still a beautiful day. Life is beautiful. It sure would be nice if I was Bobby Bonilla or Bruce Sutter and receiving a million-dollar check in deferred money, but the life I’ve got is still a precious one that I’m trying my best to cherish.