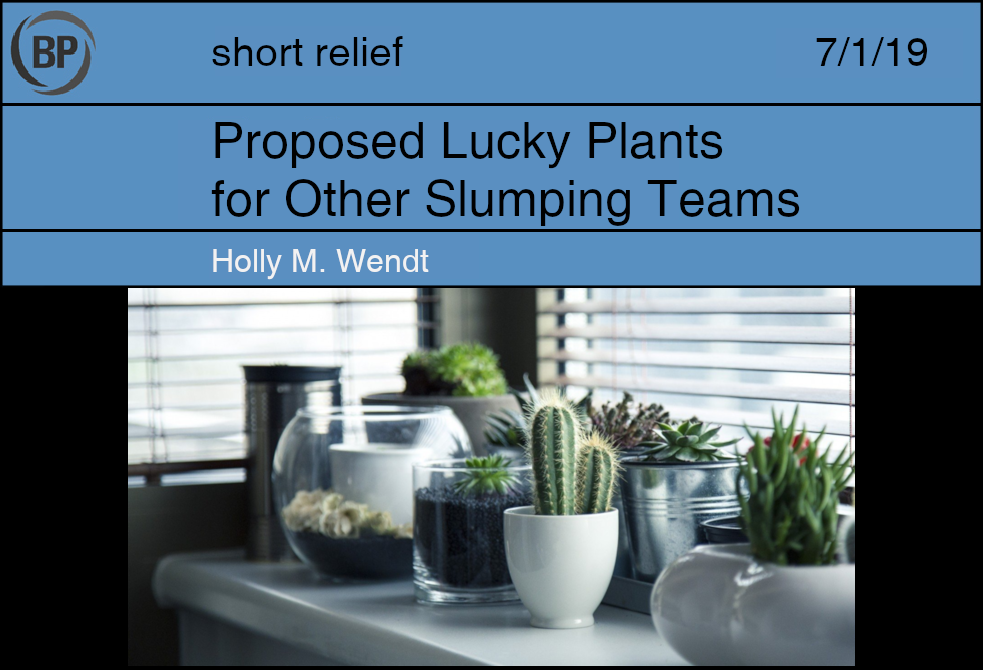 The city of Philadelphia is awash in all things bamboo, thanks to the horticultural optimism of newish Phillie Brad Miller. With the team in the middle of an ugly and ill-timed skid through the NL East, Miller sought a change of fortunes through the procurement of a desk-sized (or player locker-sized) pot of lucky bamboo. The arrival of the bamboo coincided with the Phillies scoring 13 runs against the Mets on Monday night. On Tuesday, a much larger bamboo graced the clubhouse general, and the Phillies tallied their first walk-off win of the season. On Wednesday, manager Gabe Kapler received another small bamboo. The three little plants did their work, and the Phillies swept the Mets, and it is undoubtedly due to the magic of some fortuitous panda-fodder. So perhaps some other teams might want to harness some plant power? Let me offer some suggestions!

Arizona Diamondbacks: Aloe vera (Latin: coincidentally, aloe vera). Good for sunburns. Just makes sense for a team that plays in the desert. And maybe that will help ease a little of the burn caused by having to share a division with LA.

Baltimore Orioles: An air plant (tillandsia). Air plants don’t need soil to thrive and barely need watering. The ambient moisture from the harbor should be enough, which is good, since the O’s have enough to worry about.

Cleveland Indians: Hedgehog cactus (echinopsis). The hedgehog cactus is the perfect companion for Cleveland: hearty and compact, it can also be relied on to produce occasional spectacular blooms. Additionally, it looks right at home when hunkered down, prickly and unmoving, during the offseason.

Kansas City Royals: Meyer lemon tree (citrus meyera). It’s not going particularly well for the Royals, but maybe the promise of cheery ripening lemons—just the thing for a long season—will help. And, of course, at least their season isn’t Detroit’s. That’s worth a glass of lemonade.

New York Mets: Poison ivy (toxicodendron radicans). It might work? What if the team just really leans into the horror? The bad luck and dysfunction just might come all the way back around to functional. Just have some calamine lotion on hand.

Seattle Mariners: A nice spider plant (chlorophytum comosum). The little spiderettes the plant produces are quite lovely, and when they start to take root and really flourish, they can easily be cut off and given away. Much like promising young players. 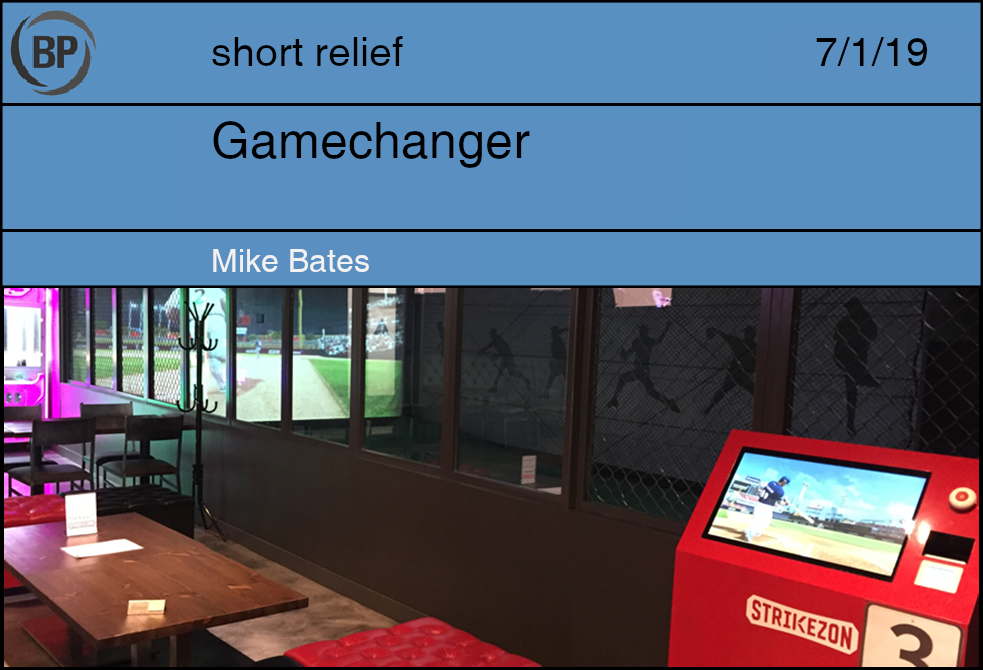 Friends, I have seen the future, or at least my future.

It happened when I was in Los Angeles on Wednesday, killing time with my friend before going to see Paul F. Tompkins do improv. I had successfully completed a diagonal journey across downtown LA from Union Station to Koreatown and I had a couple of hours before the show.

First, I asked someone at the theatre if there was somewhere close by he’d recommend that we could get a drink. He chuckled ruefully and shook his head no. “But there is a Fatburger with a full bar down the road about a quarter mile.” Well, that was obviously not going to get it done, so we kept walking, eventually resorting to Google to find a baseball-themed bar (called Strikezon (sic)) that might be showing the Twins against the Rays.

Arriving a few minutes later, we took an escalator to the 2nd floor of a plaza and walked in the front door to find…wonder of wonders!…a bar with four batting cages. The shock wore off a minute later, my mind clearing of fog enough to hear the hostess ask if we wanted to play. W-we…we did.

So we rented one of the cages for an hour. It was set up so that the pitch came out of a video screen on the opposite wall, 30-40 feet away, where it would appear to be released from the fictional pitcher’s hand. As my friend said, it was like playing a 2007-era video game, but with a bat and ball instead of a controller. Cameras would track your performance, kind of like (I’m told) Top Golf. 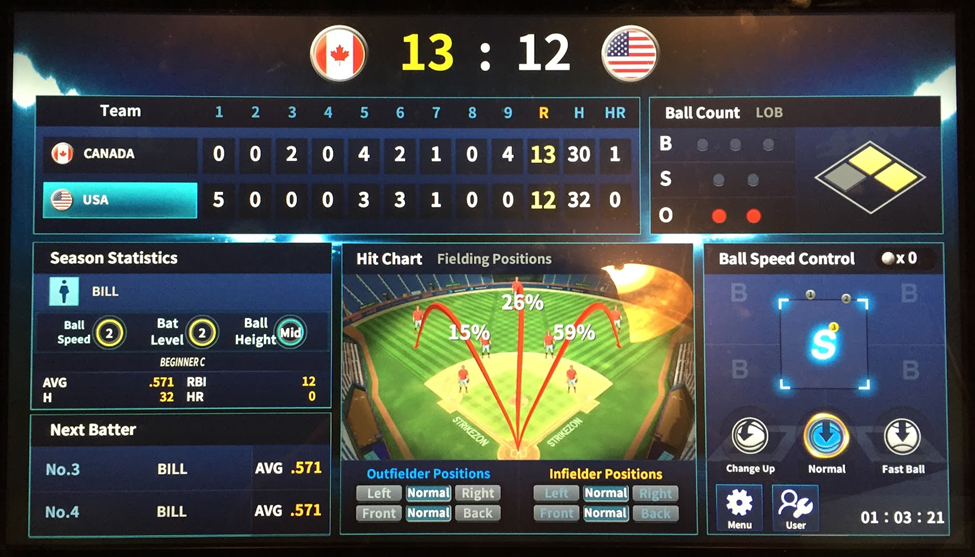 We wound up staying for an hour and a half, following up a couple rounds of batting practice with an epic nine inning game in which, I’m happy to say, I emerged victorious after falling behind by five runs in the first, with a ninth inning comeback helped along by a mammoth home run and my friend’s failed attempts to bunt a runner over twice in the late innings (remember kids: Don’t bunt; hit dingers). It took me far longer than I expected to A) remember how to swing and B) figure out how to adapt that swing around a far more ample midsection than I had the last time I went to the cages. I don’t know how Babe Ruth did it.

We quickly learned that this is an activity best shared among a group of friends. For one thing, it’s super expensive. The 90 minute session cost us almost $100, and that’s before we accounted for any beer. Split, say, four or six ways? That’s pretty damn reasonable; between the two of us, it was ridiculous (though ultimately worth it, because when was I ever going to have this experience again?). Also, by the end of it, after taking a hundred or so cuts, I was dying. Did you know that just the last two metacarpal bones in your hand can hurt? I do. Days later, I still do. My shoulders and back and forearms are miserable reminders of a wonderful experience.

Anyway, I’m telling you about this place in case you want to make a pilgrimage or have the means to investigate opening your own. And if you do, please invite me to join you. Because no matter how much pain I was in, as soon as we were done, I wanted to go again. My body will eventually heal, but my heart will never be the same.