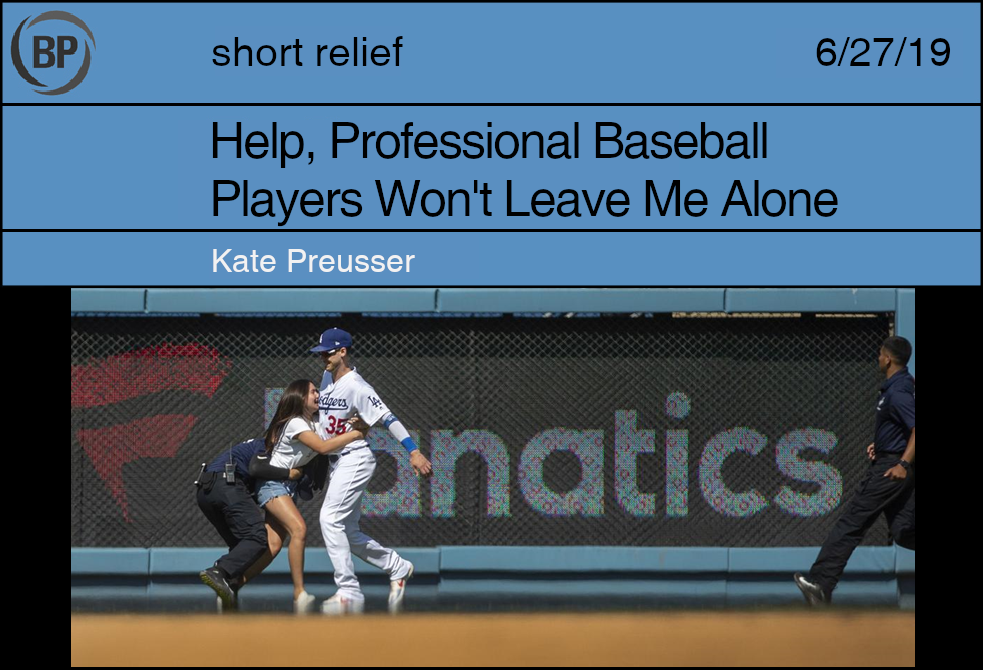 I have tried to be polite and civil about this matter, as it is not my wish any player should wind up in shackles turning the giant wheel beneath Rob Manfred’s office that powers MLBAM, but enough is enough: professional baseball players of America, I need you to let me live my life!

It was one thing when you showed up at my place of business and clung to my pantlegs as I crossed the employee parking lot, begging me to describe my day in detail. Christian Yelich, I know you weren’t as interested in the Haberer account as you pretended to be, and I know you took that file. I don’t know why you wanted it, but I must ask that it be returned post-haste, as there’s a big presentation next week. And Yadier, if you’re going to don a wig and impersonate Heidi the front desk receptionist, I hope you’re compensating her for the day off. I did receive many compliments on your phone manners, which I must grudgingly pass along. Also, Javy, while dropping down Mission Impossible-style from the ceiling tiles into my cubicle was certainly dramatic, there have been complaints from the custodial staff regarding the dust left behind, specifically because that dust turned out to contain asbestos and now the whole office is under abatement. We have a quarterly review coming up, Javy! I bet you didn’t think of that before you parachuted in and stole my coffee cup.

But things have really gotten out of control the past week. The other day I was in line at the deli counter when Robinson Cano jumped out of a display of spiked seltzers, ran over and sniffed my hair. “I just wanted to know what shampoo you buy in a store smells like,” he cried as security dragged him away. I am no cad, Robi, and will pass on your compliments regarding the scent of Secret’s Ultra Super Dry XXX-Protect deodorant to the manufacturers, which you described as smelling “floral and slightly metallic,” but will leave out the part where you wondered if this is what a laundromat smells like. No thank you, however, to Giancarlo Stanton, surprising me with a hug in the frozen food aisle and remarking loudly upon how “squishy” the “normies” are. And as much as it sent you into transports of delight, you better not have put that picture of you pinching my upper arm fat on your Instagram.

Pro players of one of the big four sports, I am flattered by your curiosity, but there simply must be an end to it. I cannot have you disguising yourselves as the Amazon delivery people tasked with bringing me my weekly supply of pimple potion and cat litter. The neighbors were first bemused, then amused, and now are leaving threatening notes in the mailbox. (You’re going to need to pay for those flowers you trampled next door, Aaron. Those size 17 divots weren’t made by Tommy down the street.) And stay out of my trash. I understand that it’s been years since you ate food that cost less than one thousand dollars per square inch, but I promise you, these Nutrigrain bars are not the ambrosia you think they are. Please, professional baseball players, I’m begging you, let me live in peace. 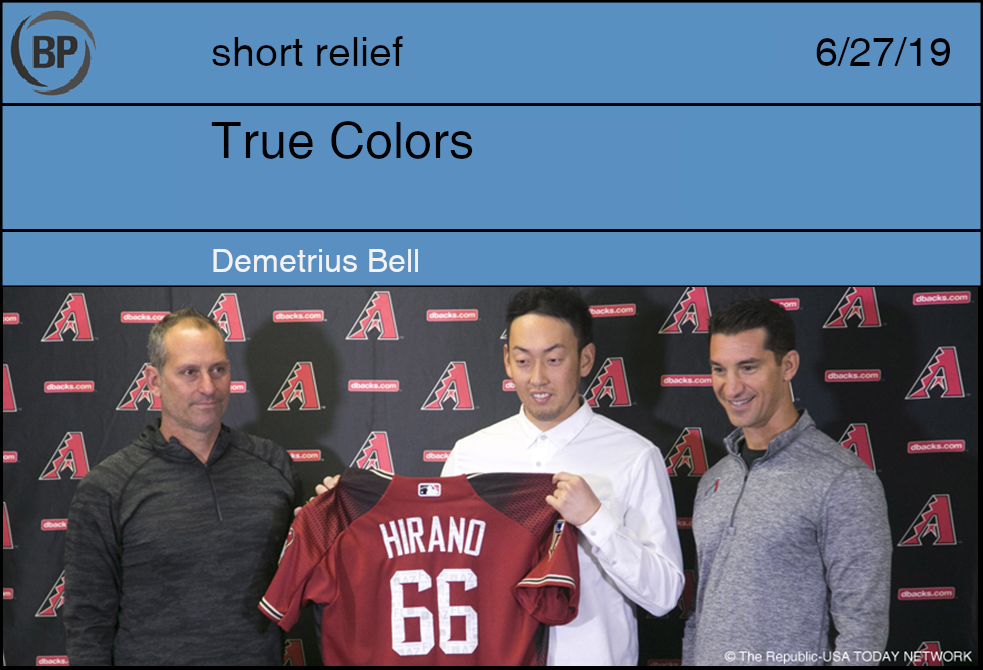 On December 3, 2015, the baseball uniform world suffered a nasty blow. The attack came from the desert. The perpetrator: a red-and-black snake with teal eyes and an ash gray complexion. The culprit was the Arizona Diamondbacks and the crime was against baseball fashion.

The violence was so heinous that nearly a year after doing the deed, the Diamondbacks went back to the scene of the crime in an attempt to fix what had been done. That should tell you just how bad the initial version of Arizona’s current uniforms were. From uniform enthusiasts to even opposing players, nobody’s really going to be intimidated or excited about a baseball team wearing a snake pattern on both their shoulders and their calves. It’s just a strange look, given the lack of shoulders or legs on actual snakes and all.

The saddest part is the fact that this wasn’t just a quick crime of passion or rage on Arizona’s part. Instead, this had been a long time coming. While the purple-and-turquoise look that the Diamondbacks entered the National League with during their infancy was clearly rooted in what was popular during the 1990s, it was unique across the baseball landscape and you could watch a D-Backs game and you’d know exactly who it was that was playing. “Oh, the team with the purple hats and a menacing 6’11” pitcher on the mound? That’s Arizona.”

They lost that uniqueness in 2007 when they went to a red-and-sand color scheme and totally revamped their look. The new look wasn’t bad at all, but it likely would have looked better if they’d stuck with their inaugural color scheme instead of basically emulating the Houston Astros. Instead of standing out, Arizona just blended in. Now, their current look has them standing out for all of the wrong reasons.

The sad part is that Arizona gives their fans a taste of what could have been during every Thursday home game. That’s when they break out the sleeveless throwbacks, and the regal color scheme that they used to sport becomes their current look for at least one night. At best, it’s a reminder of the team’s glory days from both an aesthetic standpoint and in terms of on-field success. At worst, it’s a bit of a tease of what this team could look like. I’m not naive enough to believe that a team will dump a new look so quickly, but I think that the next time Arizona decides to go to the uniform drawing board, they’ll go back to what was working for them before. 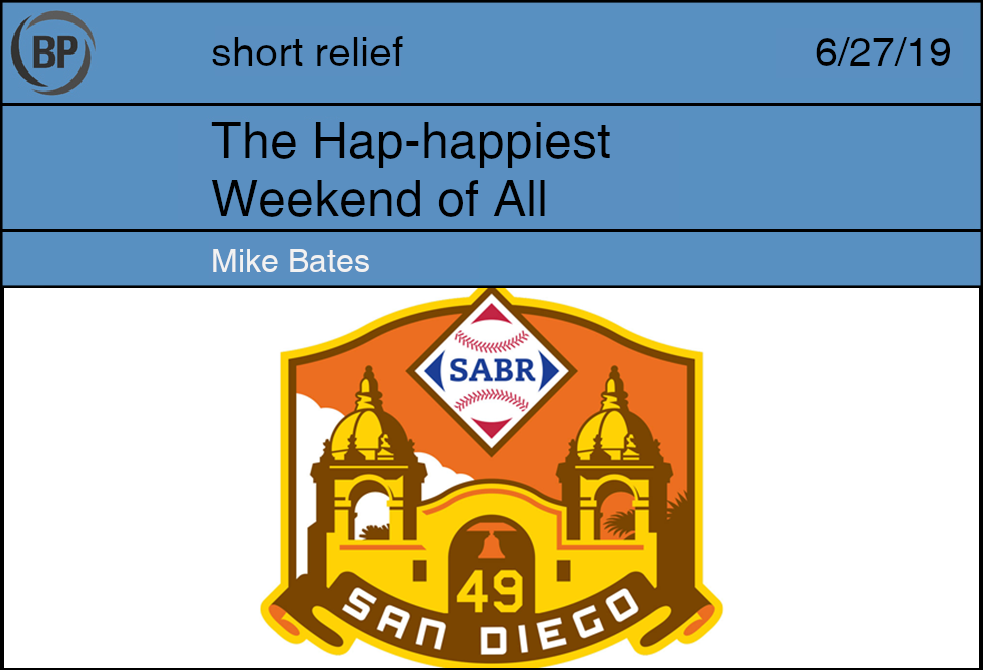 With appropriate apologies to the holiday season and to Andy Williams, it’s the most wonderful time of the year: When I ditch my family and fly alone to whichever city is hosting the annual convention for the Society for American (soon to be “for the Advancement of”) Baseball Research. This year, I’m off to San Diego, where I’ll take in research presentations, player panels, and ballgames. And I’ll be drinking and eating far more richly than I deserve, in that order.

SABR is for the nerdiest of baseball nerds. The ones who aren’t trying to get a job on some forward-thinking baseball ops or a writing staff. It’s for people who love the game so much that they want to spend the better part of four days talking and thinking about it while getting alarmingly little sleep.

You could be one of those nerds who does those things. I believe you have it in you. I believe we all have it in us. That’s why we’re reading stuff like Short Relief, because we have an innate love for the game that we want to see reflected in the people who write about it. We want to embrace the game, and for it to embrace us, and we are hurt when it falls short of that goal.

But SABR wants to embrace you, if you’ll let it. For decades, it also fell short of that goal, in my opinion. It did too little to make itself an attractive option for more young people, women, and people of color. But it’s better, and it’s welcoming. It’s for the stat nerds and it’s for the history nerds and it’s for the people who just want to hang out and drink beer and watch a ballgame together.