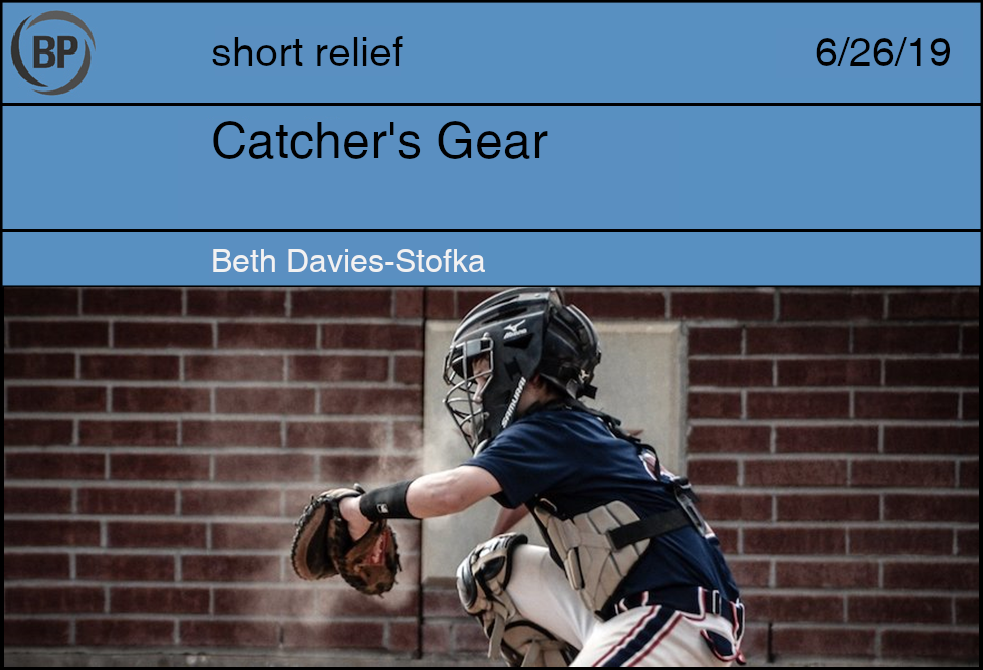 I’m not good enough. I’m incomplete and insufficient. My body isn’t good enough, my voice isn’t good enough, and, even if I could perfect them, my femaleness would still remain my fundamental flaw. Every woman and girl has to live with these messages. All my life I have fought back, all the while resisting this battle that I did not choose. I am well-acquainted with the man who becomes resentful when a woman shines, who becomes childish or cruel in order to dim her light. Last week, after I received praise from my writing group for a recent short story, one of the men present crossed his arms and said, “I think it’s bizarre that you are interested in baseball, because you’re a woman. And I mean that in a good way.” Thank you, Mr. WTF.

Baseball plays a lot of roles in my life, many of which cross into cliché. It’s an escape from the monotony of daily life, and the chaos too. It’s a spark to the imagination, beautiful, with curves, colors, and angles. It gleams with athletic achievement. It mirrors American culture. It’s just like life and it’s nothing like life. These are all good reasons to love baseball, but when that man took a shot at me, I remembered one of the first reasons I loved baseball. It’s a weapon.

I saw my first professional game, Cardinals at Mets, on a color TV with rabbit ears. For the first time, I saw Gary Carter and it was love at first sight. Later I would love his power at the plate, behind it too, but I didn’t know about that yet. No, what I found so captivating about Gary Carter was his gear. I fell for his helmet, face mask, chest protector and shin guards, the sweatbands on his forearms, and his glove, especially his glove, that giant left hand that could catch any pitch, no matter the force used to throw it.

Just transplanted to New York City, with all its promise and peril, I instinctively understood the usefulness of armor. So I sprouted my own. Now, I am covered. Now, I play the catcher. So hurl it at me. Go ahead. Aim your insults, derision, sarcasm, I don’t care. Vent your frustration in charms and threats, be subtly malicious, openly aggressive, or carelessly degrading. Take your best shot. You will fail. My face is protected. My head is protected. My body — chest, shins, ankles, wrists — all protected. And with my glove, my giant left hand, I will catch every fastball, spitball, and beanball you launch at me and I will throw it right back at you. I hope it takes out a tooth. I mean that. In a good way. 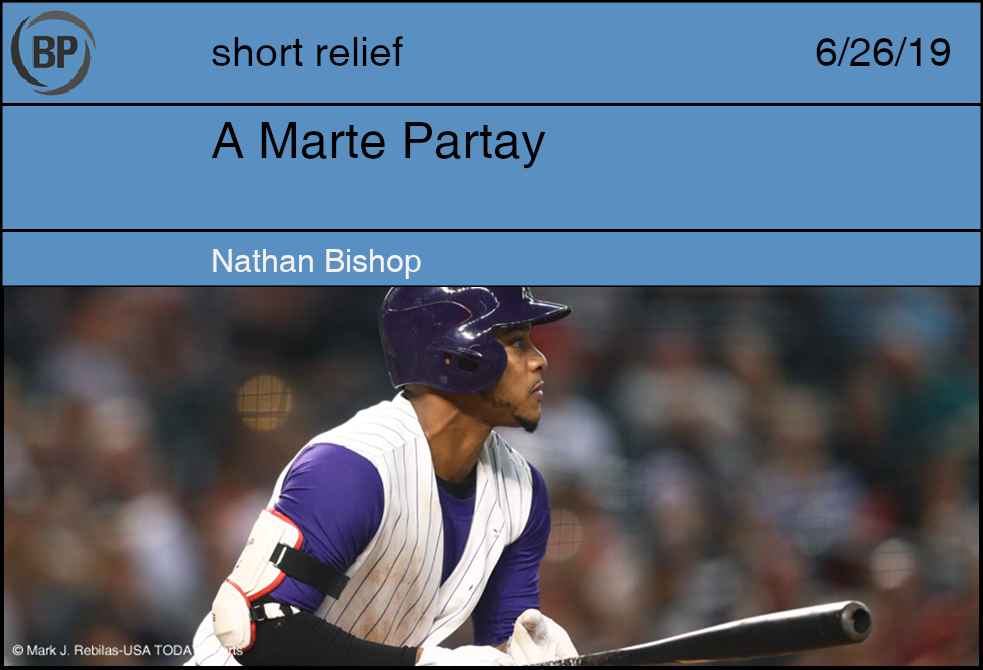 Of the many things that I am one has always been what employers would term a “good soldier”. As such I found myself dutifully playing around with our beloved main site’s new sortable leaderboards. These allow users to see how players rank in a variety of statistics and metrics, including our own DRA  and DRC+; for my money, the best metrics of their kind. Again, I’m a good soldier.

Scrolling through the leaderboards a familiar name to this Mariner fan kept popping up: Arizona Diamondback Ketel Marte. Marte was a mild breakout star in Seattle in 2015. He played good enough defense, showed good contact skills, and had just enough power and walks to be a perfectly serviceable major leaguer at 21 years old. That he did all this with blinding speed and hands quick enough to punch Neo from the Matrix in the mouth made him doubly enjoyable. For fans of a franchise that had developed exactly one (1) quality major league positional player since Alex Rodriguez, I and many others were smitten.

A nice hop through the ensuing four years, in which absolutely nothing of note changed either in baseball or the outside world, and Marte has become one of the National League’s better players. That he has done so after bottoming out with injury and illness in Seattle, and two years of tepid development in the desert, is not a huge surprise. Not all stars are great prospects, or great major leaguers from day one. No, it’s how Marte is great that shocks the senses of Those Who Knew Him When. The skinny, slap-and-dash kid from 2015 has 20 home runs at the halfway point. If you asked me in 2015 to wager on whether he would hit that many in his career, I may have just taken the under.

So Marte’s numbers are vastly different. Whose are not? It’s 2019, and the baseball is made of the stuff that splashed on Captain Marvel and gave her superpowers. Well, yes, there is that. But Marte’s transformative experience isn’t as simple as that. This is a player who went from hitting seven home runs in his first 900 MLB PA to blasting a baseball 482 feet into the Arizona night, at an exit velocity scientifically measured at 2,000.05 MPH. The swing, the physique, the intent, has all been radically altered.

It’s heartening, both for Marte’s career and my own continued enjoyment of the game, that a player like Ketel can still come along and completely take me by surprise. It can sometimes feel tempting to put every new player into a bucket that compares them to one that came before. Marte was a poor man’s Rafael Furcal, by my estimation. That we and I can get them so wrong, not just in how good they can be, but in the very essence by which they can succeed, gives me hope. Baseball’s globe often feels fully-mapped, but even in a game overflowing with power, Ketel Marte’s new home run trick keeps me looking around, wondering what might be next. 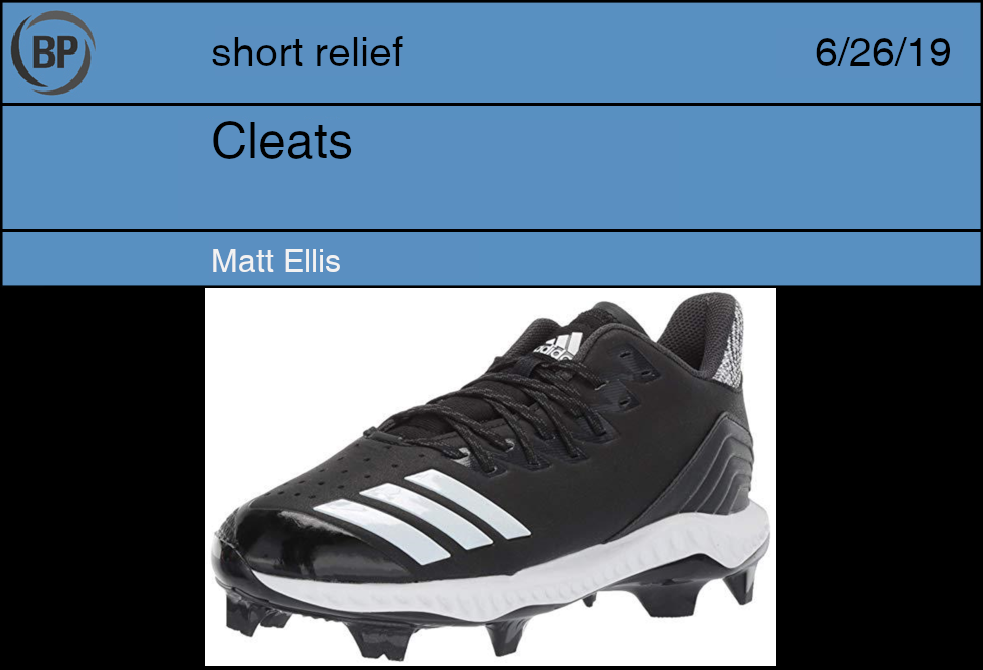 It was a wall of shoes, stitched by who I couldn’t even imagine, amounting to $75, $100, $35. Some were black, others white with some kind of cool and neat splotch design by the toes that made it look like a paint can exploded–all I wanted was something to help my fat ass get to second base a little quicker than the Vans I was wearing to the store.

One pair was red and I picked them up, staring at them less to enquire as to a purchase as to hide and pretend I was doing something valuable while the nine year old kid and his supportive sports mom were grilling the salesman behind me.

“I hope you realize that if these don’t work it’s your company’s fault,” she said, which is a thing I might invent to tell the story of a fake terrible person that is actually as bad as this narrative I’m giving you now. The kid sputtered some dumb platitude about how he wanted Nike instead of Under Armour and why his mom was mean, and I realized the story would sound like fiction.

When he came back I asked him for the $35 pair, knowing that the plastic cleats weren’t banned from my intramural collegiate softball league but also that they wouldn’t help me for a damn once it starts tomorrow, and then I started to think about what actually would help me, and I decided to take the shoes and put them on a card and quickly walk away without making eye contact with anyone working at the big box retailer that looks identical on the inside from Vancouver, Washington to Warwick, Rhode Island.

“Do you want to put this on a Dicks Sporting Goods Credit Card?” she asked.

I said no, and put the box in my bag, and then put it in my trunk, and drove away in the rain, forced to turn my wipers on harder than they were when I parked outside only a minute before.