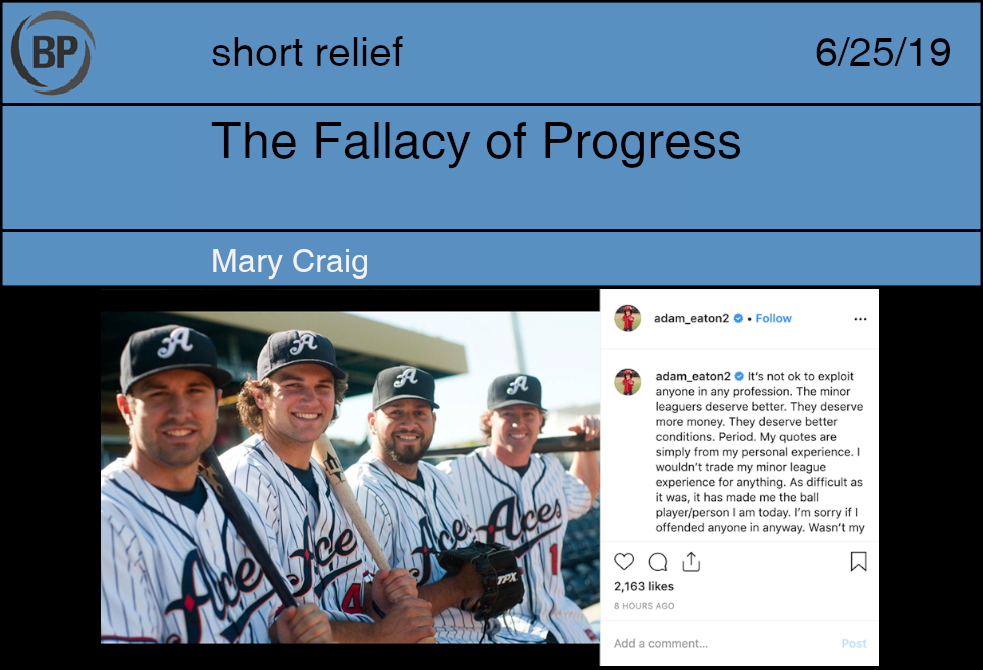 Deeply rooted in the American conscious is a belief in progress, that America exists to lead the way to a better, brighter future. This belief grew out of the possibilities embedded in the landscape of the country; there was enough land to exploit that each European settler could find prosperity for himself. The Industrial Revolution mechanized this belief, and machines soon became the symbol of both democracy and America’s ever forward march.

Out of this history emerged two tangential notions: the belief that anything is possible if you work hard enough, and that everyone should work hard in order to taste success. And so the belief in the goodness of progress transformed into an argument for stagnation. The future generations created to reap the rewards of progress became the bitter enemies of many who despised the idea that these future people wouldn’t have to suffer as they had suffered. This supposed absence of struggle, it was feared, would diminish their success. All of their accomplishments would be eclipsed by those who didn’t earn it.

The problem is that those who have been consumed by this bitterness are often the very people most rewarded by America’s mechanistic progress. Used to being at the forefront of society and believing that their dedication and hard work alone had placed them there, they came to understand the general progression of society toward human perfection as malicious attempts to cheat the competition.

Social progress gave way almost entirely to economic progress in the minds of many, and thus efforts to include those long prohibited from participating in economic progress were foiled repeatedly. The future became not something to celebrate but something to glare at warningly in hope that it wouldn’t snatch from them what they believed was theirs alone.

The struggle of the many ultimately became proof in their eyes of the triumph of progress. The technological advancement of the country blended in with the financial advancement of the few until the distinction between the two was lost. True progress, then, depended on the brilliant, hardworking few enlarging the gulf between them and the rest, no matter the cost.

To be complacent is to be regressive, and suffering wards away complacency. This is the lie built from centuries of American history, woven into every aspect of our lives, perhaps most especially in the things we love. 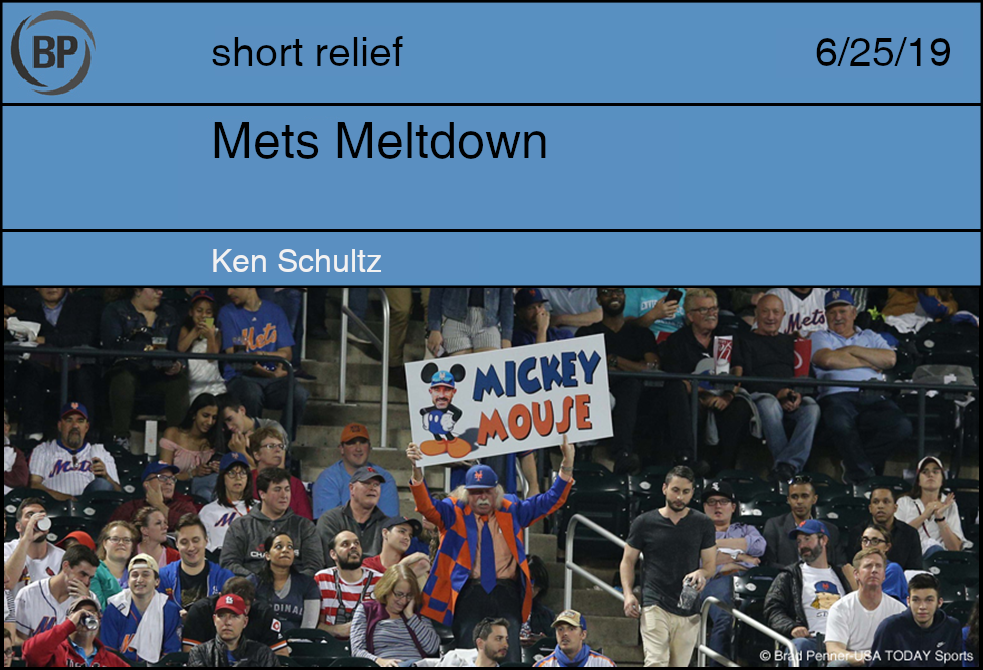 Good news for everyone who always wanted to see what would happen if a baseball team were managed by a Dr. Moreau-esque hybrid of David Brent and Larry David…the early 90s Mets are back!

There are many reasonable responses to the phrase “See you tomorrow, Mickey.” “Have a good one” is an example. So is “Talk to you later.” You have to go way down the list to come to “Shut the f–k up, get out of my face, get out of here!” The only thing close to a reasonable explanation for that kind of response is that after a year and a half of managing the Mets, Mickey Callaway is now outraged by the mere existence of tomorrow.

Not to be outdone, Jason Vargas attempted to come to his manager’s defense, threatening Newsday reporter Tim Healey that “I’ll knock you the f–k out, bro!” Which is also quite a response to a polite expression of farewell. But the underlying good news is that this could also inadvertently lead to a pitching rebirth. If the Mets change Vargas’s entrance song to The Sound of Music soundtrack, he might finally break 90 MPH. Not even Driveline could work that kind of miracle.

This clubhouse explosion seems like nothing more than the latest in a parade of #lolMets incidents that are the hallmark of the past few years. But in truth, the pattern actually stretches back much farther. Because public rage-fueled fights with the media are one of the few great traditions in Mets history.

As anyone who’s watched MLB Network on Bobby Bonilla Day can recite from memory, the most famous moment from Bonilla’s tenure in Queens was the time in 1993 when he challenged sportswriter Bob Klapisch to “Make your move” in the locker room and promised “I’ll show you The Bronx,” making Bonilla the first player in history to issue a threat of physical violence that doubled as a tourism slogan. That the Mets didn’t immediately move their next home game to the New York Botanical Garden is the definition of a missed opportunity.

That group was the subject of the infamous book The Worst Team Money Could Buy. And by uniting around the idea of beating the hell out of one unsuspecting writer, the current group of Mets are just carrying on a longstanding tradition that Bonilla and Saberhagen began. They’re the worst team money could buy, only without the money.

The Mets should run for Congress in Montana. 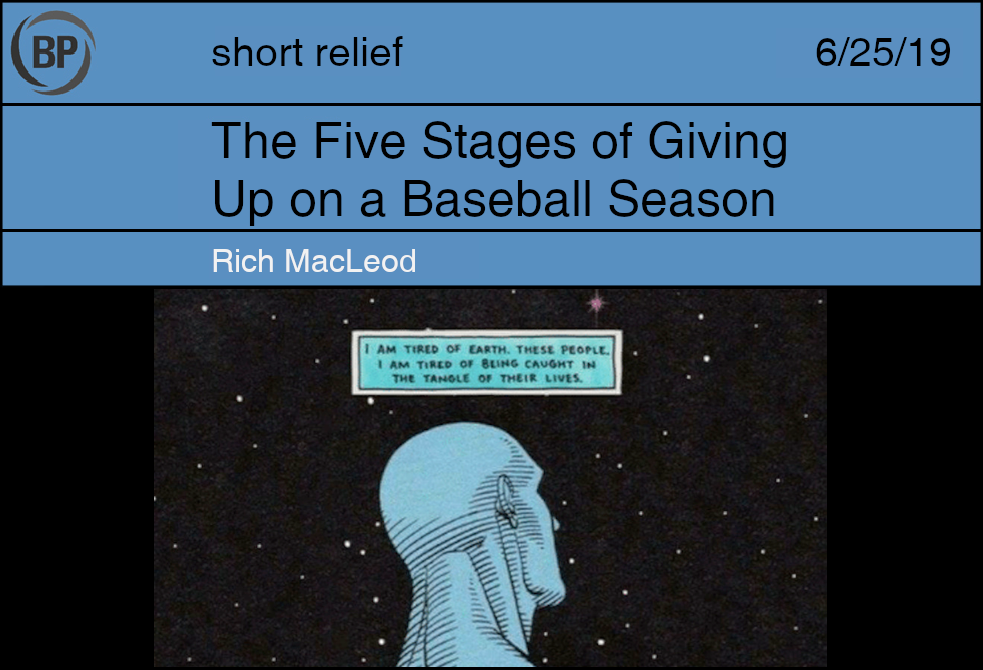 It’s something each and every one of us has experienced at one point or another. It doesn’t matter where your loyalties lie—you know this feeling. Whether it be in June, the dog days of August or before the 162-game marathon even starts, every single baseball fan has been faced with the crushing realization that their baseball season has come to a bitter end.

But because of our inexplicable attachments to these ever-changing entities, it’s never as simple as just saying “alright, that’s it.” It’s more complicated than that. This is baseball, after all.

When experiencing something like a death in the family or going through a difficult break-up, most people go through what is commonly known as the Five Stages of Grief.

Much lower stakes aside, waving the white flag on a baseball season isn’t all that different in principle. If you’re a fan of a select few teams, you’ll be in the lucky minority that won’t have to experience this for quite a while. For the rest of us poor saps destined for insignificance in 2019, here are the five stages you should prepare for (or may already be going through right now).

THE “THEY’RE STILL IN IT” STAGE

Things aren’t even close to getting away from them. A couple good series strung together and bam, you’re in first place. Things are gonna be okay.

God damn, things really got out of hand fast. You’re pissed off; rightfully so. The team still isn’t playing well. They’ve lost a few series in a row, some to teams they probably should’ve beaten. Maybe there’s a couple of blown leads by your bullpen, too, just to add to the sting of it all.

Your fingers hover over the keyboard. You know you shouldn’t, but you can’t stop yourself. You’re officially mad online.

Every few minutes you think of a new way to slander your team. It starts with a statistic to show off how truly bad things have gotten. Okay, now you’ve got a slam dunk pithy comment calling back to something one of the players or coaches said earlier in the year. Maybe you’ll even snap at a beat writer or two for not being critical enough. Yeah, that’ll show ‘em.

THE “IF THIS, THEN THAT” STAGE

Alright, let’s break this down. You know the team was playing like garbage for over a month and the standings aren’t where you want them to be but they just won two games in a row. Two is more than one and more than one is a streak. This is the beginning of the run. This is how all great sports stories begin.

Tweet out that classic team rallying cry because this thing ain’t over yet.

THE “I DON’T WANNA TALK ABOUT IT” STAGE

Yeah, you were wrong. This thing is over.

Your friends who are fans of other teams want to check the pulse of your fandom, but you’re not here for any of that. You’re tweeting less. You’re not as eager to watch the games on TV anymore and if you do manage to turn them on, it’s conditional. Maybe if they’re winning or your ace is pitching or our rookie phenom is doing rookie phenom stuff, but overall, you’re losing that drive. Whoops, the rookie went yesterday. Missed it.

Your anger is subsiding and now you just want to forget that you’ve wasted the last few months putting your heart and soul and time into a group of 25 strangers that has delivered nothing but late nights and disappointment.

More time has passed now. You haven’t sat down and watched a full game for quite awhile. You’re not even sure what the standings are anymore, but you know it isn’t good.

That’s because something painfully beautiful has occurred: you don’t care anymore.

Sure, you’d like to see your team win some games, your favorite players perform well, your young guys develop. Maybe there’s even something as cool as a no-hitter or cycle or something to give you something to enjoy in the midst of all this mediocrity. But you’re not living and dying with every pitch anymore. You’re not cursing out your radio or television or smart phone when your team gives up a five-spot or your manager does something you might not agree with.

You’re free now. And while the constraints of fandom can still be heard clattering around in the distance behind you, you’re not being held back by those chains anymore. Not this year, anyway.

The year will end and as with everything, time will heal your wounds. Even if the team doesn’t have the offseason you’re hoping for, even if you’re furious with the decisions they’ve made over the preceding six months or so, Opening Day will come and hope yet again springs eternal.

Despite any semblance of logic or reason, most of us will begin the process of dreaming big. The cycle will complete itself and there you’ll be, exposed and ready to be hurt once more.