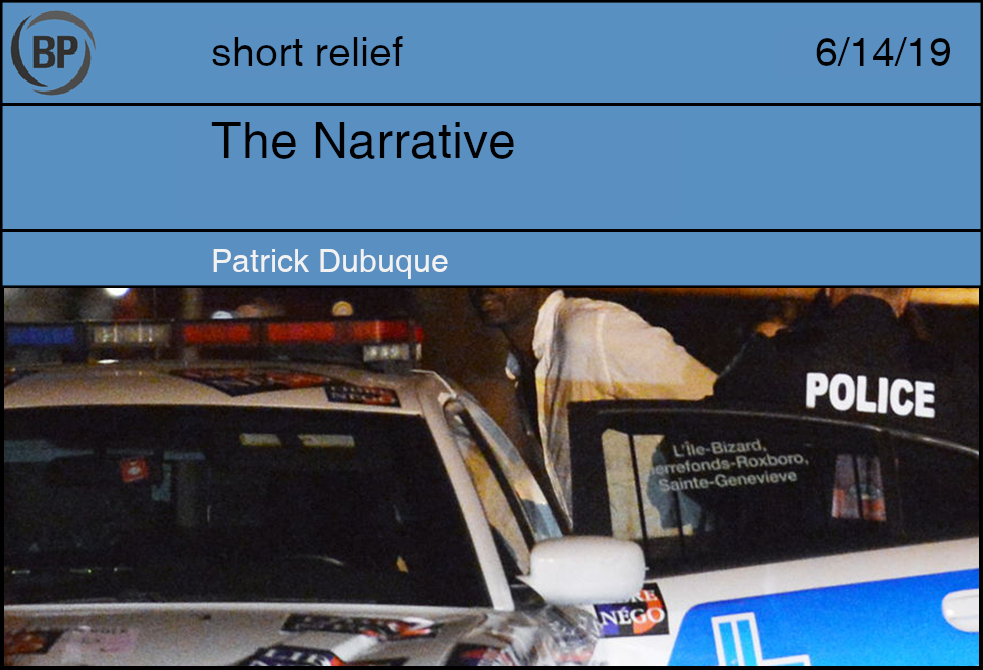 In 2001 he was arrested for misdemeanor criminal trespassing; the newspapers didn’t go into details, probably because they didn’t have any details. It’s the sort of crime where someone decides they don’t like where you are. The original complaint came, they said, when someone saw him trying to deposit an empty envelope into an ATM at the mall, just pushing it into the slot, over and over. At some point, teal and piped soft rock; at another, two weeks in an Arizona prison.

He was known for this. He fought with his co-workers, involving them in arguments they didn’t know they were having. He yelled at objects. Days after the previous arrest, he’d been taken to the hospital for a different episode, “just a checkup,” then got arrested for rolling a joint in the middle of the emergency room. He lost a couple jobs after that, went back to the hospital for some indeterminate amount of time, disappeared.

Fifteen years later he was arrested again. This time the 911 caller complained that he’d been threatened by a man with a knife. When the police arrived, they found him in his low-rent West Montreal apartment, hiding under the covers of his bed, playing with a lighter. He was handcuffed and taken into custody. What happened then is unknown: the newspapers summarized his life story, then moved on.

We know so little of this man’s life. That we know anything at all is only because of one thing: that he was on a couple of baseball cards, once.

There’s a pattern to the reporting: a mention of his high draft status, anecdotal evidence of his symptoms of mental illness, a paragraph bemoaning his “wasted talent.” One article quotes one of his managers in the Orioles system, who said: “He got into a fast crowd, got involved with some fast company and into some things he didn’t need to get into,” equating mental illness with a kind of weakness. It would be a very 2001 quote if it weren’t also a 2019 one.

There is also a pattern to what isn’t reported, the treatment he received from his employers, the support networks that were supposed to help an eighteen-year-old boy navigate adulthood. Conspicuously absent is the man himself, his own thoughts, his feelings, his internal struggle. One direct quote exists of him, describing a training camp appearance in 2009, a washed-up thirty-year-old getting a pity favor from an independent Canadian baseball team, the very lowest rung of capital-B Baseball. “I am here to give my 100% and have fun,” he said. “For the rest, I do not control anything.”

Now, he is gone again, no longer an ex-baseball player, just a pronoun. Until it suits the narrative. 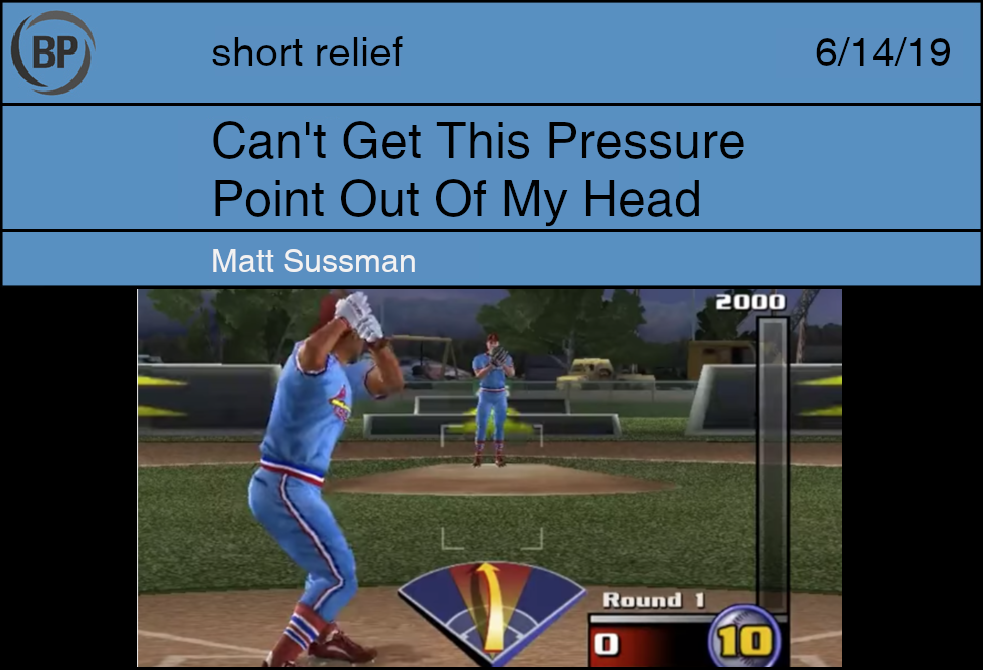 Sports video games have always been a roulette wheel of success but the vein of commonality has been that novelty sustains the legacy. Games that try to introduce realism just turn the game into an airbrushed sport. Bases Loaded had Paste. Base Wars had the fights. RBI Baseball lionized Vince Coleman. Yes, MVP Baseball 2005 had John Dowd, the antithetical stand-in for Barry Bonds. But it also had that soundtrack. That damn soundtrack.

I am wholly unsure why this set of nine songs remains in my head years later. It was mostly alternative rock filler, which doesn’t fit in with my personal musical taste of a 65-year-old uncle. Perhaps the song that anchors the soundtrack is Dropkick Murphys’ “Tessie,” a nod to the Red Sox and the 2004 World Series, and a harbinger for how the next 30 years of Boston sports is going to be. There are some decently energetic anthems such as the Donots’ “We Got The Noise” and Rock n Roll Soldiers’ “Funny Little Feeling.” And You Will Know Us By The Trail Of Dead offered the ambient “Let it Dive,” and Louis XIV provided the perhaps problematic (with desperately cleaned up in-game) lyrics of “Finding out True Love Is Blind.” The Zutons’ “Pressure Point” and The Bravery’s “An Honest Mistake” were catchy enough and Hot Hot Heat’s “You Owe Me And IOU” is just a straight up weird combination of notes. The High Speed Scene’s “The IROC-Z Song” just sounds like a demo tape.

This is where I’m supposed to say that these songs are highly underrated and deserve attention, but … they’re not. What I can say about them is they were played in my head relentlessly while I tried to unlock points and achievements as Brandon Inge tattooing BP pitches over ramps and lawnmowers in that blasted mini-game. It’s probably the same reason I hold dear that Dragon Warrior overworld song, a mindlessly trite ditty that lasts literally 16 bars but has probably repeated half a million times in my presence. They’re benevolent earworms with lifespans of Galapagos tortoises.

It might also help that 2005 was my college graduation year and therefore my transition into adulting, serving as a life lesson I didn’t realize I needed. In this case it was that every day isn’t filled with new exciting challenges, but rather a series of repeating things that you didn’t choose to happen and due to its infinite loopiness you are going to remember them years later for no reason at all. Having said all that, I kinda want to play the game again and wish I still had it. 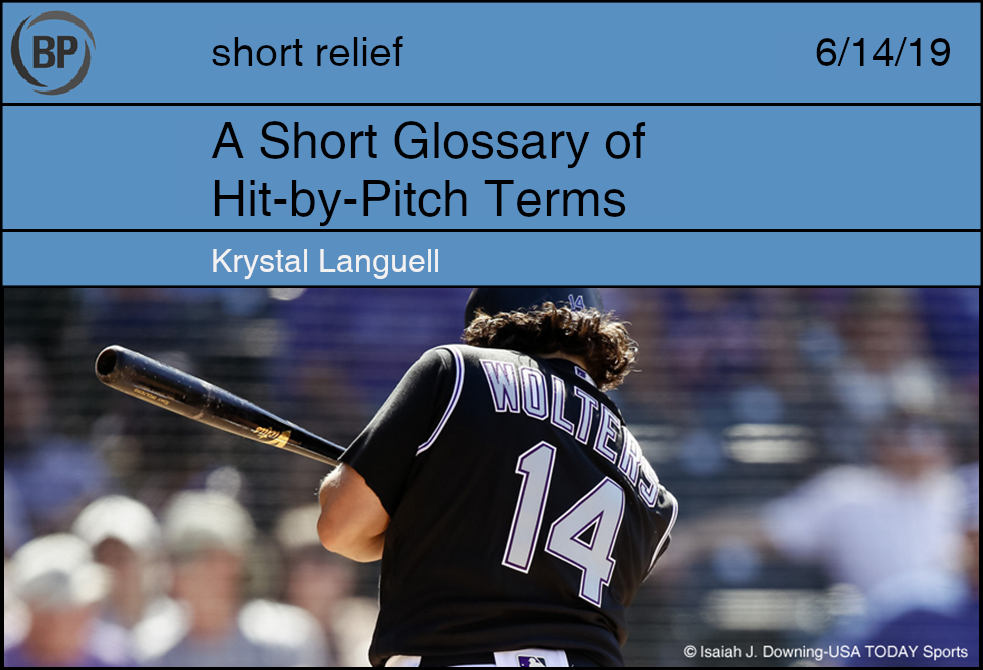 Sports commentators often employ a verbal shorthand that can be opaque to the casual listener or viewer. The following offers definitions for some key terms one might encounter when pitchers hit batters with the baseball, however intentional or wild those plonks may be.

losing command: The pitcher is bad at his job and I definitely expect this base runner to score.

don’t start none, won’t be none: Maintaining consistent behavior typically results in a player being regarded as neutral; however, unusual behavior will yield unusual results.

to be honest with you: The terms I’d prefer for this description are not permitted on a national broadcast.

the staredown: Personal responsibilities and financial commitments prevent me, the batter, from coming over there to discuss an unexpected item in batting area.

play around, play around: If one chooses to engage in unproductive conduct in this environment, such conduct will be met with a correspondingly unproductive response, which may result in less enjoyable outcomes than one is accustomed to experiencing.

that’s baseball: I am tired of this particular rivalry and this conflict is taking too long.

employing some choice words: Viewers of the television broadcast can read everyone’s lips, but radio listeners will have to watch the name-calling clips online later.