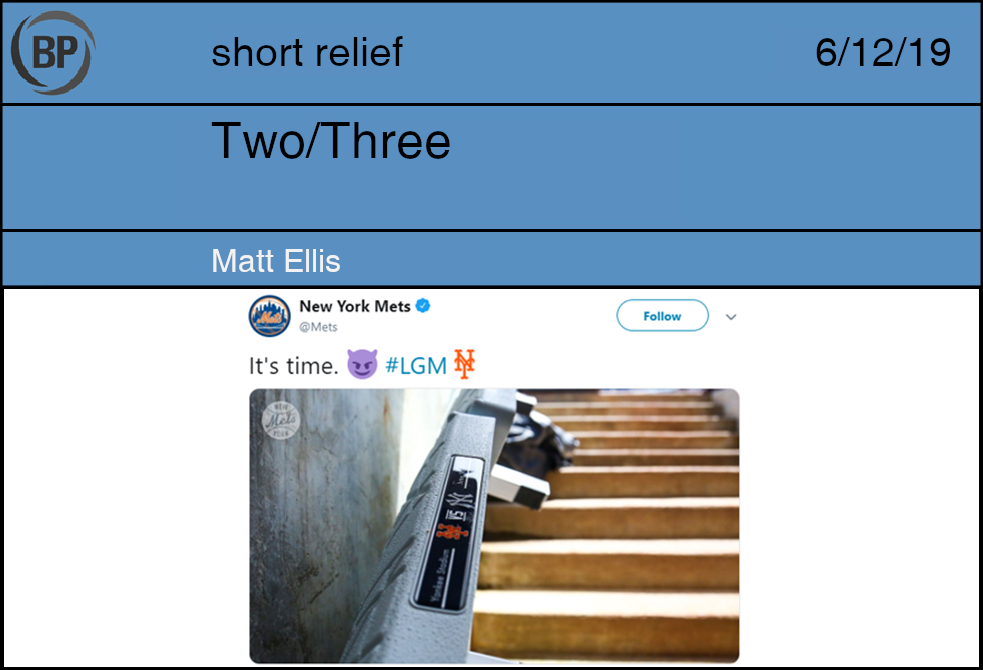 German philosopher Georg Wilhelm Friedrich Hegel is often credited for developing one of our society’s most important modern philosophical concepts, that of the dialectic. Hegel’s dialectic builds off and extends classical philosophy’s Greek concept of a dialectical exchange, in which two opposing sides of an argument–a thesis and its antithesis–stake out a kind of territory to battle out their wits amongst themselves before arriving at a conclusion: either with one side’s ultimate victory, or with a synthesis of both arguments, taking bits and pieces of the best parts of each.

But to Hegel, and the German philosophers who followed in his wake, the dialectic soon became much more than a model for winning a high school debate tournament. And to some followers, it would even become something like a model for making sense of the development of history itself. I’m simplifying here, but rather than following a straight line from start to finish, many thinkers started to wonder if historical developments themselves could be considered something like stages in a dialectical process, one event’s reality giving rise to an anti-thesis in an attempt to battle it out over material resources. One event, quickly followed by something like an opposite, but unequal, reaction.

Twenty-four hours ago the Mets were 32-33 and the Yankees were 40-24. Now, they are 33-34 and 41-25, respectively. This is because both teams played a doubleheader on Tuesday, both teams from New York, in one single day. As you can see here, the score for each game was nearly identical, but flipped: the Yankees routed the Mets by seven runs before the Mets won game two with a score of 10-4. Looking deeper it continues to get weird. In both games, each losing team still earned exactly nine hits. Both losing pitchers were upper-end rotation starters chased from the field early. Two opposing forces, smashed together like oncoming trains.

But unlike the new of that metaphor’s train wreckage, or a synthesis emerging out of the conflict between the two, what we got was just a set of strange mirror images which cancelled the other out right away. The Yankees are still tied for first in the AL East, but have seemingly half the roster on the IL. The Mets are still sputtering around .500, and are still the Mets. In what could have been a day of progress, a movement towards a new, transformative reality that brings back pinstriped stars or sees a front office begin to realize their path has been sullied, we got a reset button. The dialectic, it seems, has been stopped dead in its tracks. 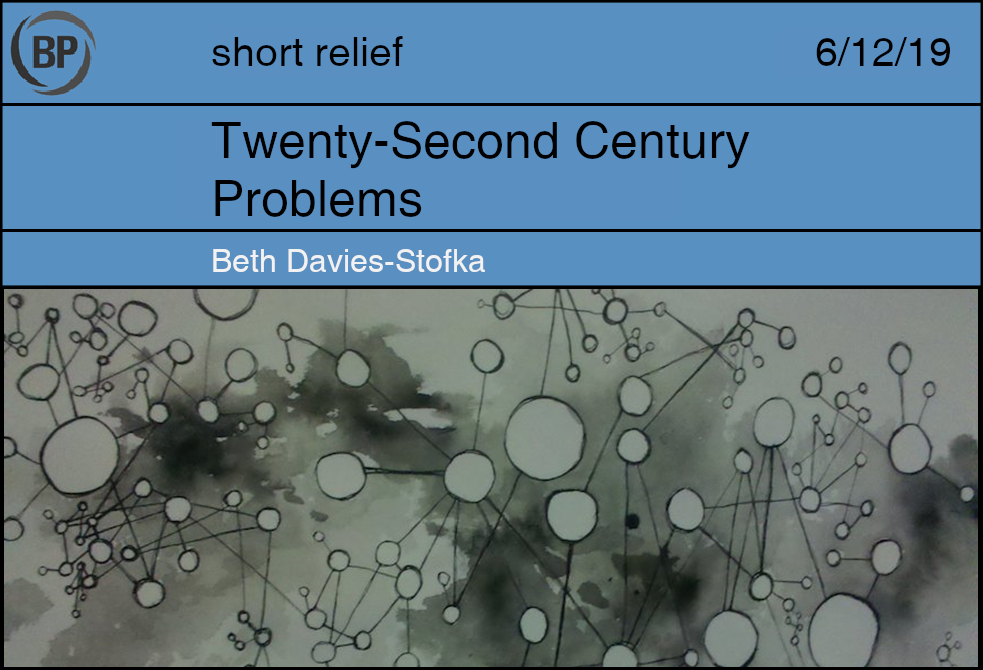 The year is 2021. A middle-aged man in a crisp white shirt sits at his desk with the unmistakable air of futility. There was a hiring frenzy when MLB combined the major and minor leagues, which is how Larry landed this job as GM of the Tulsa Turbines, but it turns out he can’t handle it. So he sits at his desk, running his hands through his thinning hair.

“Hey, is anybody still here?” he calls out. He wouldn’t mind some coffee, but as expected, silence. He picks up a pencil and doodles aimlessly. “Why didn’t I see this before?” he says to the empty room. To himself he mutters, “Everyone else has, that’s for sure.” He slumps in his chair. “So I need a second baseman with some range. What am I going to do?”

In the outer office, Larry hears someone. “Who’s there?” he calls. A lean man appears in the doorway, dressed casually, and smiling casually too. “Can I help you?” Larry asks, but he’s worried. Is this guy here to fire him?

The stranger strolls into the office and says, “I’ve brought you some new tech, courtesy of MLB. I think you’ll like it.” He sets a cylinder on the desk that reminds Larry of a processed potato chip container. When a circular light on the cylinder activates, Larry deflates. “We’ve got one of those at home,” he says. “They’re nice for grocery lists and music, but I need to acquire a second baseman, fast.”

The stranger sits down. “Tell it what you want,” he says. Larry decides to play along. He says, “I want a second baseman who can move when the ball is hit.” The cylinder lights up promptly and says, “Stephen Areles with the Clinton Stackers will be available in four days. A five- year contract is $2 million. Shall I order him for you?”

Larry stares at the stranger and lets out a short laugh. With a forced smile he tells the cylinder, “Oh, yeah sure, order Areles.” “As if,” he adds.

“It’s no gimmick,” the stranger says.

“It’s no advantage either,” Larry says. “What’s to keep all teams from getting one?”

“All teams are getting one,” the stranger replies. “I’m delivering them now.”

“Same as all the GMs are going to do,” the stranger says. “Figure out what you want and tell the tech. The devices are networked and the software does the rest.”

When Larry gets home later that evening, he tells his wife what happened. When they wake up the next morning they see the news that the Tulsa Turbines are acquiring Stephen Areles from the Clinton Stackers. The next century came early, and with it, Larry’s success. 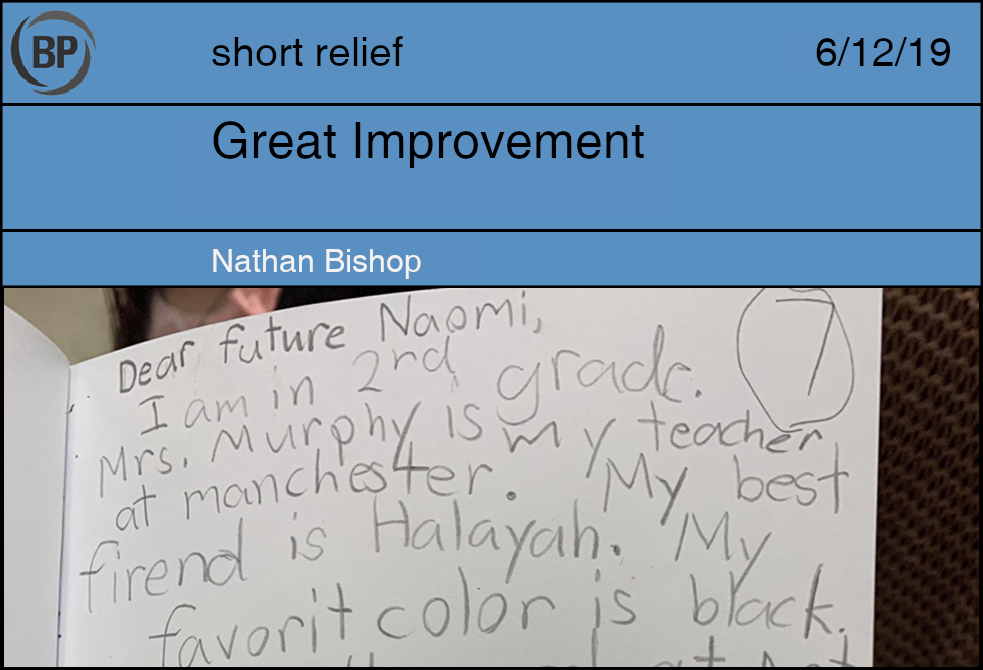 Inspired by the wise words of my daughter

Hello there. As I’m writing this we are experiencing a lot of difficult circumstances, but let’s keep this note primarily focused on baseball. Other people are reading this, after all.

Oh Nathan, where to start with baseball? Our Mariners are in last place. In some way that feels comforting and familiar. As we’re growing older we’re finding ourselves falling into the nostalgia trap of thinking everything was better when we were younger. The Mariners were always in last place when we were a kid and so, in some sense, things feel right. This is how it was, back when the world felt sane and safe. You know?

It’s probably good to remind you what things are like right now. Remember, from the time of this letter our society feels very much like it is teetering on the edge of a cliff, waiting to plunge not just us, our friends, our family, and our country into an abyss, but maybe even the human race itself. We are collectively asking ourselves if we want to do what it takes to survive, and the first answers trickling back are not very encouraging. It’s a tough time to be human, man.

That time has clouded over into baseball, too. For 150 years baseball owners worked through various machinations and schemes to eliminate the variability of winning and losing, and ensure their teams were efficient, predictable profit machines. Well they finally figured it out, and I’m sure you don’t need me to remind you it sucks! Teams are owned by giant mega-corporations that treat baseball organizations as just another subsidiary, like a set of regional fast-food franchises flipping burgers in billion-dollar, tax-payer subsidized palaces. No team fails anymore, because none are trying to succeed. In the ways they care about, they already have. The game is over, because it finally got gamed. Everything ahead is just profit, profit, and more profit.

But that’s all the bad stuff, Nathan, and not the reason I’m writing this letter. I wanted to tell you how hopeful I am that you’ve stopped mourning the death of your childish love of baseball. At your best you could use the game as a way to unite people, and promote not a team’s success (what success did the Mariners ever give us to promote?), but the idea of caring about them as a regional experience.

At some point you stopped doing that, and started arguing a lot. I get it. The world’s on fire right now, and everyone is yelling about everything. But it’s hard to say “Here is this great and beautiful thing that I love. I think you might love it too.” through gritted teeth. I hope you eventually learned to overcome that, and not only hold your tongue but to let things go; to truly cast aside things and people that don’t matter. It’s better for everyone if you did.

Nathan, I hope between when I write this and you read it you spend a lot less time staring at a computer, and a lot more time outside. I hope you finally get off your butt and join a softball team, swing a bat, and laugh at how badly age has eroded your middling athleticism. I hope you laugh a lot. You’re not doing that much right now, and it’s not good for you. I hope you remember that baseball isn’t MLB, and it’s not the Mariners. What you loved about the game never started with those things anyway, and nothing they do can destroy it. It’s a game, and a great one. I hope you’ve been playing a lot of it, and doing a lot less writing about it. There is a balance to these things, and yours is off right now.

I’ll look forward to meeting you, and seeing how you’ve done. You have a long way to go, but you’re not alone in that.

I hope you make great improvement.