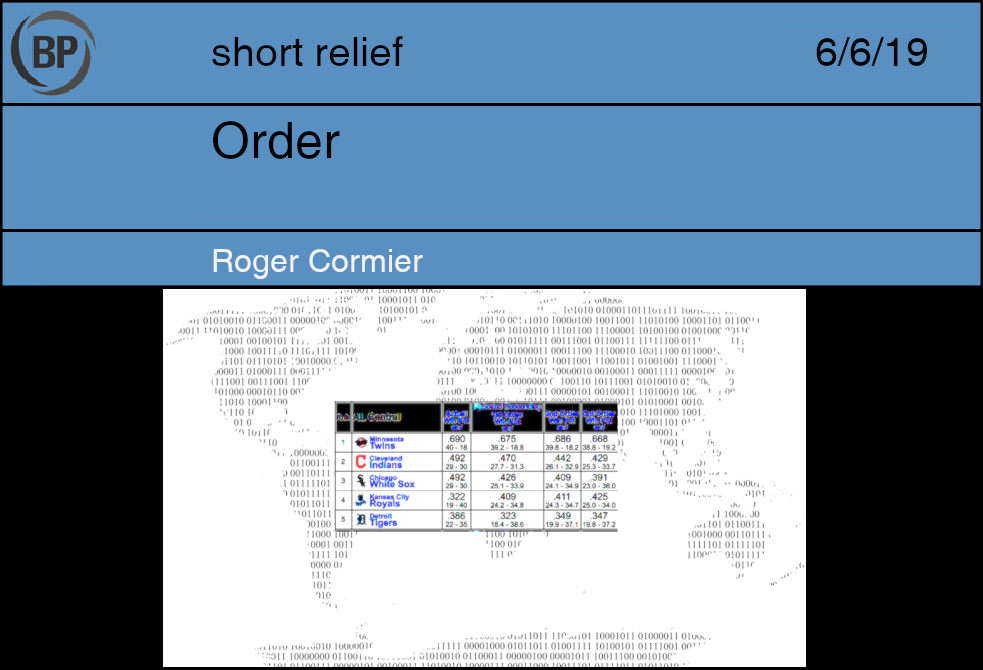 It was a nice hotel suite. My guest paid for it.

He was sweaty the entire time, in any sense of the word I have seen it used. It was obvious he practiced his questions beforehand. I felt sorry for how hard he tried to make them sound off the cuff, to be honest. Each answer I gave him added a new wrinkle to his seasoned face, and for what it is worth I felt sorry about that too. Not enough to stop giving them, mind you. But sure, a little bit.

“What is 1st Order Winning Percentage?”

“It’s the same as Pythagorean record.”

“It’s ironic, since Pythagoras was such a square.”

“Are you serious right now?”

“Please don’t call me sir. 1st Order is what your record should be based on run differential. The runs you scored and the runs you gave up are factored in.”

“And the um…Twins… are doing well there?”

“The Twins are doing well with 2nd Order and 3rd Order too. They’re seemingly for real.”

“2nd Order is 1st Order, but instead of the actual number of runs they scored it’s what they ‘should have’ scored, based on um, science. It’s easy to figure out but hard to explain out loud. 3rd Order is 2nd Order with the quality of opponents they faced factored in.”

“Is there a uh, particularly unlucky team out there right now?”

“Well, in the NL Central there are a few. Like the Reds.”

I decided at that moment to be cruel. Drunk with the power of a hotel suite will do that.

“There are a couple others. But then, we’re not factoring in 4th Order and 5th Order.”

My guest sighed so loud it reverberated. I was impressed.

“4th Order is 3rd Order, factoring in the level of perceived earnestness of the phrase ‘payroll flexibility’ the organization used during the offseason.”

“Of course, the 6th Order is the most important. It’s the 5th Order, but now character is factored in.”

The silence bothered me, so I decided to continue.

“The 7th Order is the 6th Order with possible ties to the Illuminati baked in. 8th Order and 9th Order I always mix up, and nobody really notices, but I seem smarter for some reason when I make them interchangeable. They are interchangeable to me because they both involve corn futures. Now the 10th Order is the tricky one…”

My guest was a few steps from the door when I noticed he was about to forget something. 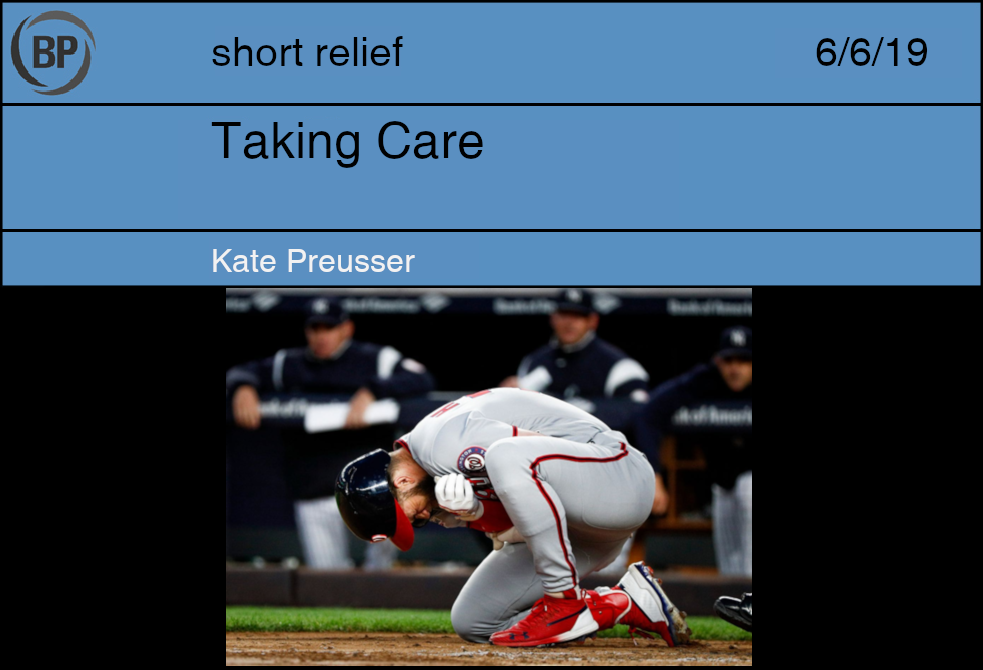 I’m pretty sure I have a cavity. There’s a constant dull achy feeling in one quadrant of my mouth, or not really an ache, but a sense of hollowness. Something that should be there, isn’t. I won’t do anything about it though; I don’t have health insurance, at least not the kind of health insurance that allows for luxuries like dental care that doesn’t also entail forgoing food or lights for the month. This seems bizarre to me, the way we are allowed to treat our bodies like beater cars where the cost of improving them outweighs the value of the vehicle itself. At what point can I declare myself totaled?

There is a trend now of stories going viral in which a worker somewhere–a teacher or secretary or bank teller or retail worker–becomes ill with something serious, or has a child become very ill, and has to miss work, and eventually runs out of sick time or personal leave, which threatens their job security and leaves them without a way to pay for the treatment for the problem that’s causing the absence in the first place, and then the person’s co-workers chip in by donating their own days of leave, and these are framed as heart-warming stories, of people helping people, when in fact they are ghastly. Recently a story went viral of the workers at a Home Depot constructing a walker out of PVC pipe for a child born with “floppy baby syndrome” (one of those afflictions we haven’t had time to come up with a less-Victorian sounding term for, I suppose), because the parents were afraid their insurance wouldn’t cover a walker for a baby with floppy baby syndrome and the story was painted in bright hues of American resourcefulness and can-do-it-ism and not in the dystopian gray of a society tottering towards the deathline. Because of all the concerns the parents of a baby that flops should have, wondering if furniture-grade PVC pipe is necessary or if foamcore will do should absolutely not be one of them.

The human body is a complex machine, and like a Mini Cooper, there are endless things that can go wrong with them and only a few manufacturers of approved replacement parts. It’s common for baseball folks to joke about Mets players coming down with injuries that can only be described as B-sides from Gray’s Anatomy, but beware that when you point a finger at someone, you have three pointing back at you, and one of those fingers probably has boutonnière deformity. Today one of my own favorite Mariners, Braden Bishop, was placed on the IL with a lacerated spleen, apparently caused by being hit by a pitch in the ribs in Triple-A earlier in the week, but maybe also caused by briefly handling a cursed pocketwatch. While it stinks to see Bishop’s time in the majors aggressively halted, he has crossed the threshold of playing in one MLB game in order to secure a lifetime of healthcare from MLB. Provided he makes it back in the next month or so, he should still be on pace to clear the 43-day mark, at which point he’s eligible for a pension. The MLBPA argued strenuously for expanded medical benefits in the last CBA, and as they should; baseball is a slow, fairy tale-like grinding away at one’s bones, until at one point, the body eventually gives out: Prince Fielder’s neck, Miguel Cabrera’s knee, Rick Ankiel’s everything.

Meanwhile, the Mariners have opted to call up a recently-acquired Giants castoff in Kelby Tomlinson to fill Bishop’s space, passing over seven-year minor-league veteran Ian Miller, still waiting for his chance in the bigs. The light-hitting Miller has made his living in the minors by gritting his way on base with infield singles and stolen bases. Hopefully his body will hold up long enough that he, too, can make it to the majors some day, and secure himself a lifetime of health care. I’m not sure if the PVC baby walker scales up or not.

You need to be logged in to comment. Login or Subscribe
Cameron eadie
We have universal health care in Canada. No need to treat our bodies like a rental car . Sure people still “ total “ there bodies but in there final days spent in the health care system it’s all bought and paid for.
Reply to Cameron
Matthew Moon
I think the link is supposed to be Mac Williamson, not Kelby Tomlinson, Kate?
Reply to Matthew