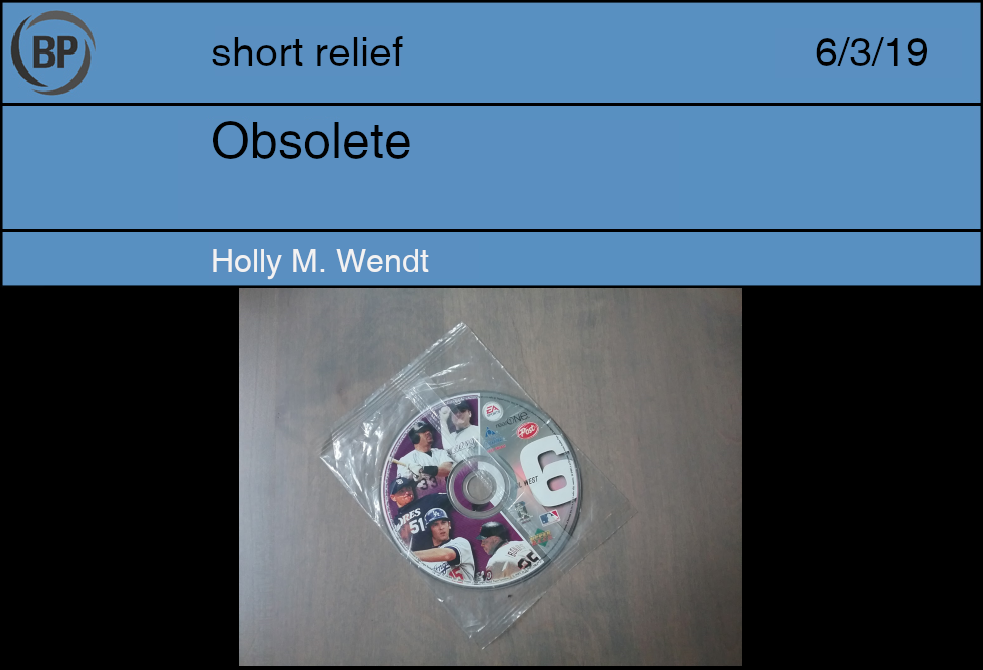 In a box of computer-related detritus my parents didn’t want to get rid of without my input exists a still-in-package CD-ROM, complete with what can only be cereal dust caught in the tighter corners of the plastic. On further inspection, the disc is #6 of a six-disc collaborative promotional effort from Post, AOL, EA Sports, Upper Deck, the realONE media player, the MLBPA, and Major League Baseball. Disc #6 is dedicated to the NL West, and the half of its surface not dedicated to brand names shows five players: Curt Schilling (Arizona), Larry Walker (Colorado), Trevor Hoffman (San Diego), Shawn Green (Los Angeles), and Barry Bonds (San Francisco).

Shawn Green was back in Dodger Stadium on Saturday night, on June 1, 2019, for the team’s annual alumni game, taking up his old outfield post, but on this piece of plastic, it is forever 2003. Barry Bonds is two seasons removed from 73. It is the year that Facebook launched in its earlier guise as FaceMash, and Curt Schilling, not a college student, is not regularly embarrassing himself on social media. In the summer of 2003, I’m only peripherally aware of baseball, spending the season’s opening and closing finishing and then starting degree programs and the middle month figuring out what it’s like to travel alone on the other side of the ocean. In 2003, like in 2019, though, I wish it was any of the other discs that’s been retrieved from that cereal box; even in this strange in-between, I want my nostalgia to be more personal, more connected. Ken Griffey, Jr. is on the NL Central disc, and Pedro Martinez is, of course, featured for the AL East—the former a generational icon, the latter a future—past?—Phillie. In 2003, John Smoltz and Pat Burrell are still sharing space in the NL East and on this silly marketing tool, and that’s familiar enough. What isn’t familiar is what’s on the disc.

I no longer have a computer with a CD-ROM drive—neither do my parents, and we haven’t for years. Given its still-packaged and solo state, no one ever investigated the thing even in its relevant context, which card-collecting forums and eBay sellers describe as containing virtual trading cards, video clips, and a playable video game—in addition to the requisite free AOL trial. How this strange thing came to be preserved at all, I couldn’t say. But it was part and parcel of a very large box of similar things—an unopened Who Wants to be a Millionaire? game that someone probably won at family reunion Bingo, dozens of cords and adapters for machines no one has anymore, some floppy discs containing a copy of Doom and the remnants of my first college work—and convincing my mom that I didn’t want any of it was harder than I expected. That I was content to cut and run from so much of it I found less surprising; even though I can think of a few ways to circumvent the logistical challenges—borrowing external drives from campus IT, a thing I’ve done before—I couldn’t think of a reason why I would want to. I’m not surprised. I’m just not sure what else I should feel about it. 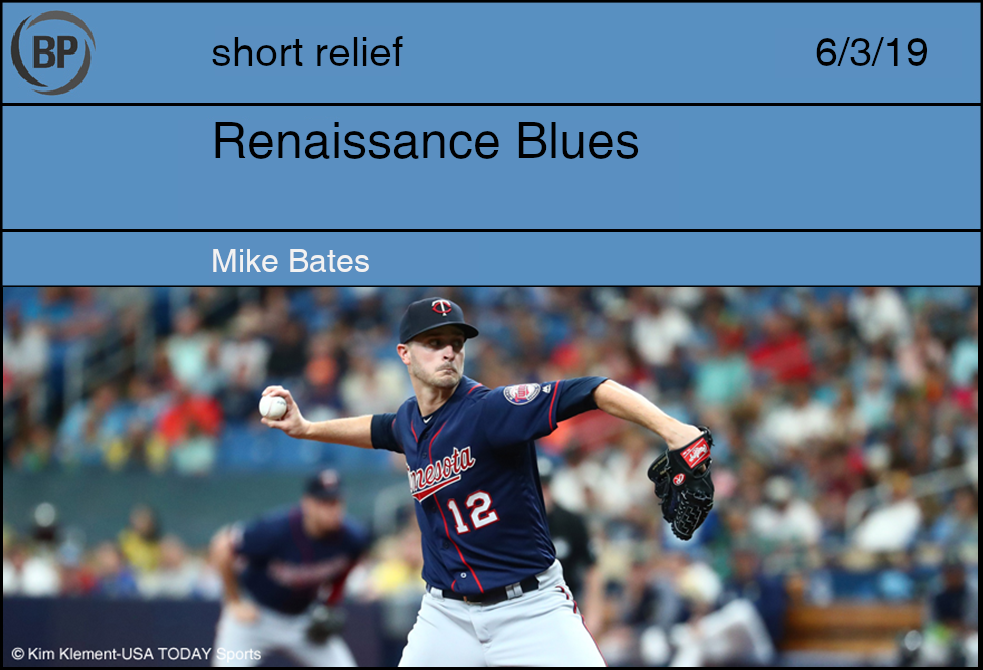 I spent much of today in a mud-drenched field where a renaissance fair unfolded around me. Mostly, as I took in this alternate world where people dressed as Danish invaders and slept in “authentic tents the way Vikings did” 50 feet from their cars, I found it all to be very exhausting. The pageantry and costumes and affectations. The 30-minute line for funnel cake. As we tried to leave after three hours, a man without a costume told my kids and me that the king would be very upset that we left early, unless of course we had lots of fun and promised to come back next year. It was…a lot.

I don’t mean to slag on all ren-faires or the people that go to them. My infinitely-patient fiancee is one of them, and we went to support her. It’s just that, these days, my personal capacity for playing pretend has a breaking point, and it’s several degrees and at least an hour short of my experience today. I can handle trick or treating or playing school with my daughter, but that’s about it. I’m afraid I’m not going to be able to banter with the mermaid who also does face painting.

I wish I could have enjoyed it more. Everyone there seemed to be having a great time (except for the funnel cake fryer). I’m generally a jovial person, but so much of my personal capacity for fun and whimsy is being taken up by the Minnesota Twins, a franchise who has had a renaissance of their own in 2019. And whose game today I skipped for our family outing. For most of the last eight seasons, I’ve been so disappointed I haven’t felt at all bad about skipping a game here and there. It was good for my productivity and my mental health, and I never actually felt I was missing anything important.

But this year’s team is so damn entertaining and so damn good that it’s nearly impossible to turn away. They are electric. Byron Buxton could make an impossible catch at any time. Willians Astudillo makes going from first to third into performance art. Eddie Rosario simply can’t stop hitting home runs. Jake Odorizzi, of all people, has an ERA just a hair over 2.00.

It’s exhausting in its own, much more deeply satisfying way for me because it promises a reward at the end of October that isn’t an elaborate wind chime made from discarded turkey bones or a necklace etched with Nordic runes that spell out your name, or a wicked sunburn because it turns out you forgot to bring the SPF 30. When the renaissance fair leaves town, all that’s left behind is mud and garbage, whereas what will be left at Target Field after game 162 promises to be so much more. And much more real. 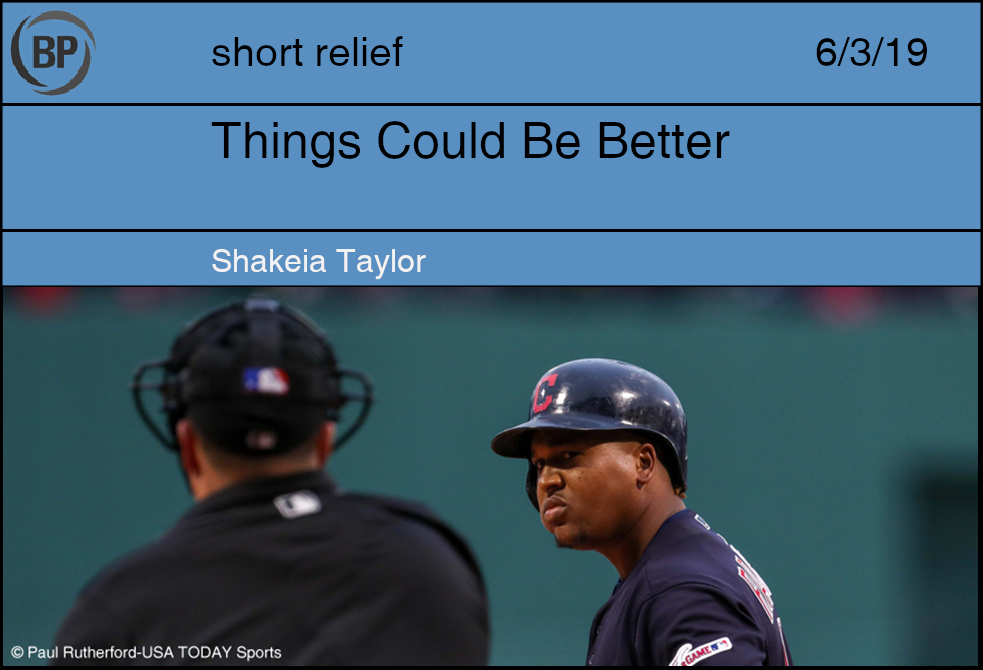 The Cleveland Indians are not playing good baseball. The organization made basically no moves this winter, and now I am paying the cost. Yes, me personally. For the last few seasons, I’ve been struggling to find the balance in having a little bit of optimism and in, well, being a fan of a team from Cleveland. I’ve been trying to just keep the joy in knowing Francisco Lindor is on my favorite team at the forefront of my baseball thoughts, but I am then rudely reminded that the Dolans are definitely going to screw this up – “enjoy him while he’s here.” It’s extremely unfair to me that this team went to the World Series three years ago and the postseason twice since and I have nothing to show for it but a migraine and performative indifference. Behind the shrugs, I’m actually hurting inside.

This team has won five times in two weeks. Five. They’re hosting the All-Star Game in less than two months and it will take literally everything possible going right for them to be able to go into the break able to breathe even a little bit. A lot of people expected the Minnesota Twins to be good, but no one seemed to know Cleveland would be this bad. 11 games back bad.

Right now, the Indians are basically dueling with the Chicago White Sox for second place and they aren’t looking like the stronger team out of the two at all. If the pitching is good, the bats are silent. About a week ago, a friend texted me, “what’s wrong with José Ramirez?” I stared at my phone, wishing I had an answer. With a stretch against the Twins, the Yankees, and the Reds – all in Cleveland – I really hope Tito and Co can come up with a couple answers and more than a couple wins. If not, I’m putting my fandom on the IL.