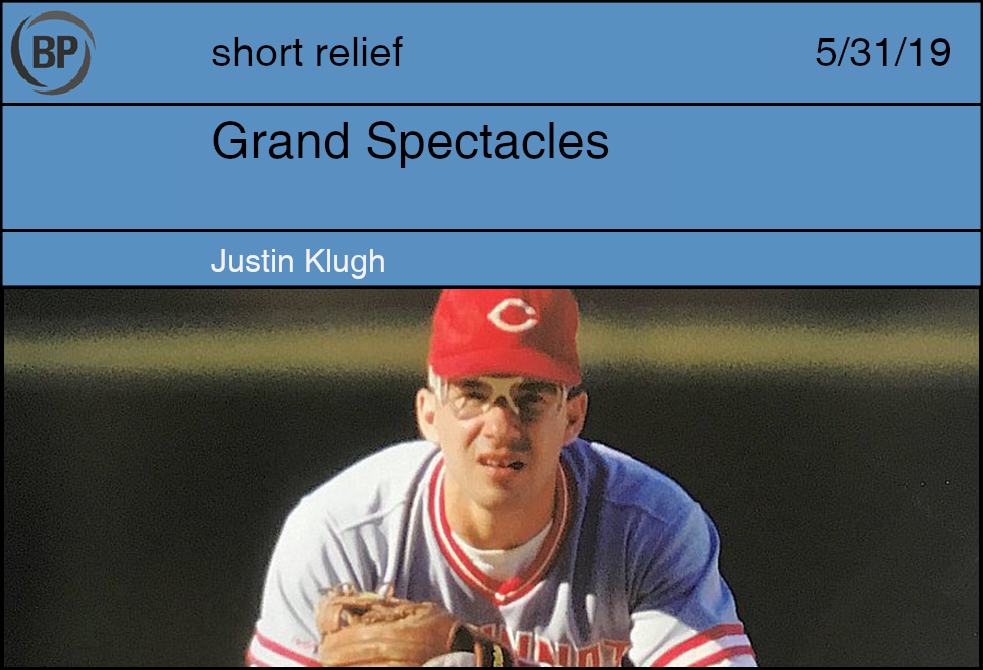 The teacher handed me an envelope, and my heart started racing. I never got envelopes. I never got called out. I was very much a background character of my second grade class, putting my books in my bag and thinking about Nintendo. I wondered what it could be. Had I won a prize? Had they determined I was gifted? Was I the chosen one, destined to be whisked off to a magical academy invisible to the unworthy?

“HOLY S***,” I now realize the letter must have said, the words scribbled in my teacher’s handwriting over the results of my vision test.

Looking back, I have no idea how I made it to second grade. I have the worst eyesight of anyone I know. Neon signs were just blocks of illegible colors to me. I was a curious child, oblivious to the crippling curve of my corneas; a perfect combination for fatal nearsightedness. I had every reason to get pulverized by a cement truck or fall into an open sewer before I was 10. Thankfully, a lack of motor skills prevented me from being too active a child and I remained safely indoors with my LEGOs for quite some time.

But when that envelope went from my backpack to my parents’ hands, it was off to the eye doctor–the same one who had treated my father when he was about my age. The story goes that my dad had been brought in for a routine exam by his father, the doctor ran some tests, and that day he put a pair of glasses on my dad’s face that changed his world.

Walking back outside, he looked up and began sputtering excitedly .

My grandfather’s eyes went wide as he realized the depth of my dad’s vision problems to this point and considered what else they might have missed along the way. Eventually, my dad became downtrodden at the prospect of being bespectacled for a lifetime, so my grandfather–in classic a “my grandfather” move–took him to the local VFW where he’d hang out, and a crew of his day-drinking buddies cheered dad up by pointing out how many of them were wearing glasses, too.

I didn’t have a bar full of Korean war veterans to lift my spirits, but I got used to my glasses, too, even though I failed to swap them out as fashion dictated over the years. The result of this is a series of pictures from my childhood in which I am wearing the glasses of a high school principal from the 1950s.

When I eventually did step onto a baseball diamond, I learned that glasses didn’t come with me. No, when you play sports, they call them Rec Specs. And they look just as cool as you’d think bulky eye wear with a rhyming name would look.

You don’t see rec specs too much anymore. This week, when J.D. Hammer made his MLB debut for the Phillies, he did so wearing the glasses I had so longed to replace with contact lenses for much of my adolescence. I grasped a photo of myself in my hands, demanding answers.

“Is it too late?!” I yelled. “Is it too late to go back and assure my teammates that my eyewear may make me ‘the kid with the goggles’ now, but one day, I’ll be fashionable and cool?”

“Yes,” said the picture. “You also sucked at baseball.” 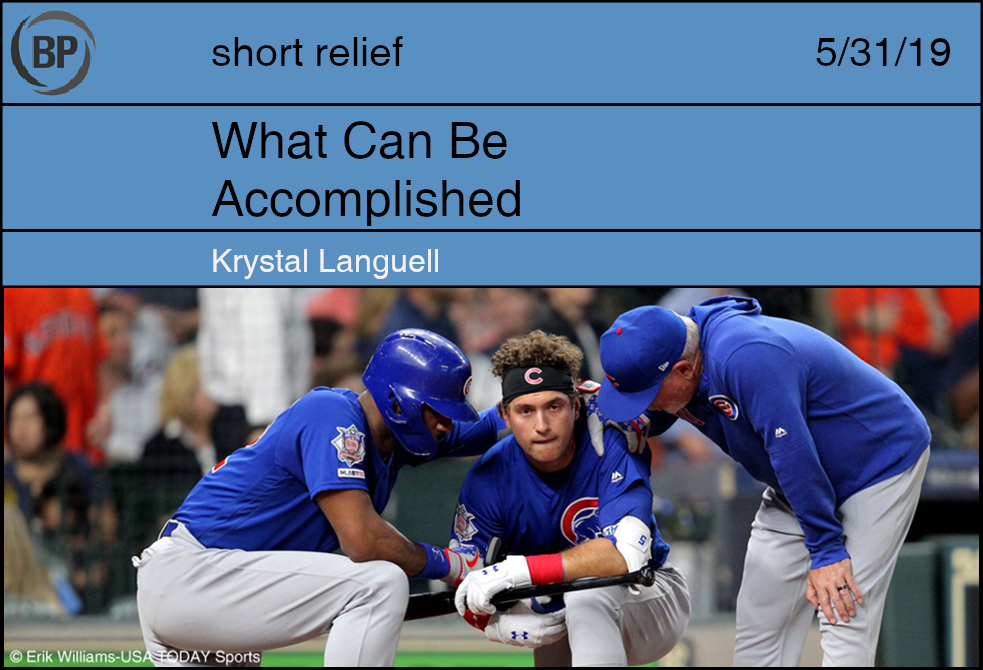 green light has a ring to it on three and nothing
the body gains damage, gaining much grief
grief punctures, complete
the check swings beneath all their subtlety
on a roster vacancy, management moves
under stress, in those eras he scored only solos
yet no one knew each run fully
but often the mascot was deflated for storage
a batboy was punished
I wondered why the trainer said pre-sprain
when we’re all pre-dead
even with the sun out, the ball game can stink
if you’re leading when the last half inning ends
you usually win
of late, it seems like player energy breaks
under the wrong pressure 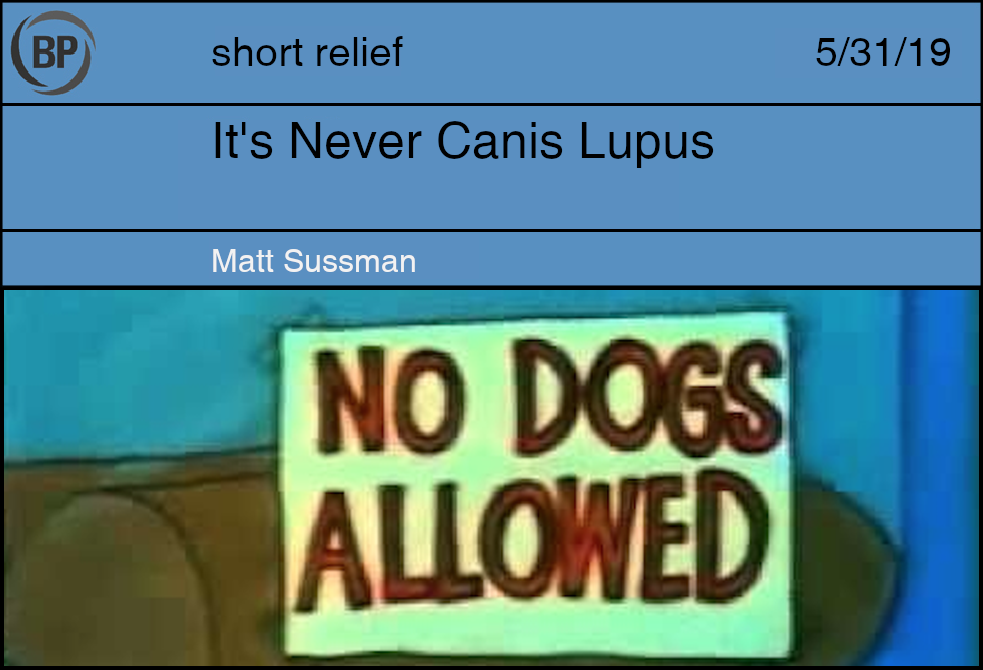 Baseball has done good by hosting heritage nights, pride nights, womens nights, deaf nights, family nights, cheap seats nights, and several other promotional festivities to increase inclusivity in the stands among racial, gender, ability and socioeconomic fault lines. We can celebrate all of these. We cannot, however, include other species.

So it is with a heavy heart that I must announce that we should no longer have barks at the park. That’s right. I’m cancelling dog nights.

According to a recent Slack conversation, fellow Short Relief correspondent Nathan Bishop referred to dogs as the “RBIs of sports,” which is not untrue, since they cannot exist without help from those in front of them, namely their money-possessing owners.

But the real question is why bring the dogs at all. This sensation feels pretty recent, which means I’m definitely mostly sure it’s just for #content purposes. I get it, the vast majority of logged-on folks enjoy dogtent, as it alleviates their stress from reading about what the humans have done lately. In which case… just put pictures of dogs on social media. Save the aisle space for the two-legged.

And if it needs to be stated, it is impossible to cultivate baseball interest within dogs. They do not understand the rules. They can’t clap or sing along. They do not care that they might show up on the jumbotron. They do not understand why the large upright animals who look like their owner are throwing a ball around in the vicinity but for SOME REASON NOT TO ME. In fact they probably loathe baseball for this very reason, never mind the loud noises and fireworks and aforementioned large upright strangers suddenly running scattershot for some reason. No, they’re mostly in it for the car ride, specifically one that does not end at the vet, unless we’re talking the Phillies ballpark and only your owner refuses to call the new stadium by its trademarked name. Dog owners can still attend the games by themselves because it’s ridiculously easy to keep the dog at home for a nonspecific period of time. And since dogs have no concept of time, and three hours feels like forever to them, then they already understand what it’s like to attend an American League East game.

You can easily abolish barks in the park and dog owners will still identify themselves after exactly 10 seconds into a conversation about someone else’s human children. Dog nights can exist, but only if we’re talking about the popular sausage sandwich and it’s discounted. The dog population probably doesn’t appreciate that either, and all the more reason to do it. Stick to sapiens.