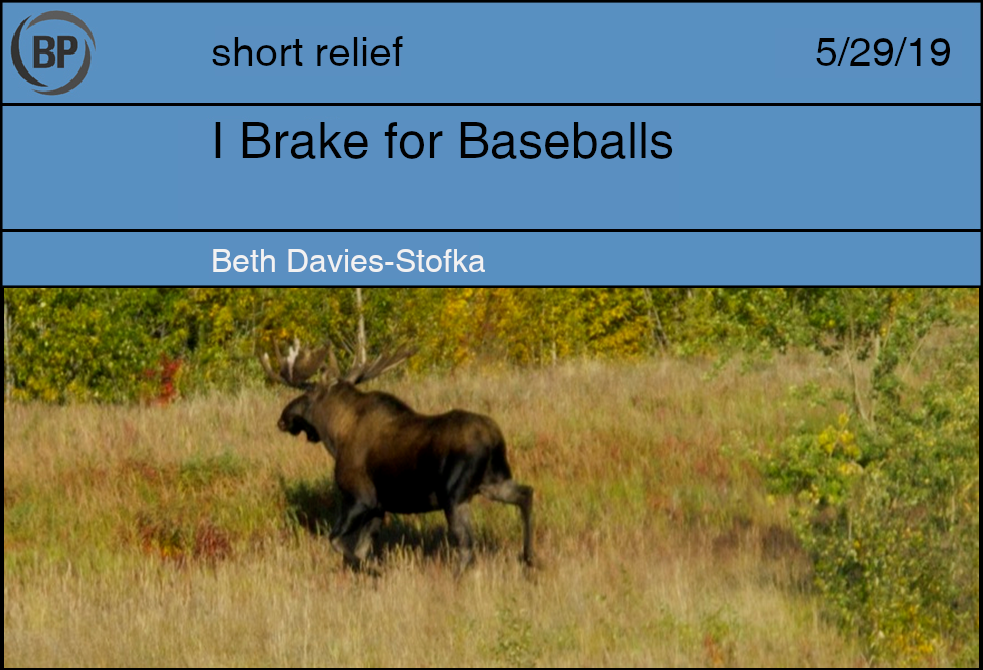 Last week, I was driving down a wide city street lined with box stores, chain restaurants, and strip malls. I could have pulled off into Discount Shoe Warehouse, or Best Buy, or Wendy’s. I could have grabbed a taco while getting my oil changed. I was provided the opportunity to pick up my dry cleaning, drop off a photo for framing, and wash my car. Basically, it was typical drive on a typical day, down a typical American street.

It’s a little hard to describe the surprise I felt when a baseball shot out in front of my car. It was an astonishing sight; a baseball in the crosswalk, sailing and bouncing as if it had just come off a hot bat. There was no place it could have come from, but more to the point, it was crossing the street against traffic. Instinctively, I braked.

I don’t always use the brakes when surprised. Sometimes I press forward. Think of the time I had cancer. The day the call came, “your biopsy was positive,” I dove in. Within a week I’d had surgery, a week later, radiation, and 35 days later, I was done. Cancer was behind me, unprocessed, unresolved, and the following April I was on the road. I explored Georgian Bay. I watched the sky at dawn. I listened to the loons, writing and sleeping and making new friends. I did and saw all kinds of things, but what I did not do was stop.

Ironically, it was in Marathon that I finally stopped, on the northern shore of Lake Superior. I had just turned off the Trans-Canada Highway and was meandering down the road to the coast when I saw a moose. It was right there, that moose, right there at the side of the road, so I braked. I came to a complete stop. We eyed each other warily, but it did not budge. It just stood on the side of the road and glared at me. So I gave in and resumed driving, and the moment I did, that perverse creature charged me and I hit it. It bounced up in the air and slammed down on my hood, and then it got up and stalked off into the woods, without so much as a glance. There I sat, a huge dent in the hood of my Jeep. I took it as a sign and started home.

What do you do with a bolt from the blue? When it was cancer, I gripped it hard and threw it back. That moose looked so stupid, but it dictated events. I was helpless. And the baseball? If I hadn’t braked for that baseball, it would be stuck in the grille of my Subaru. That would have been kind of nice, but I braked for it. It looked so free. 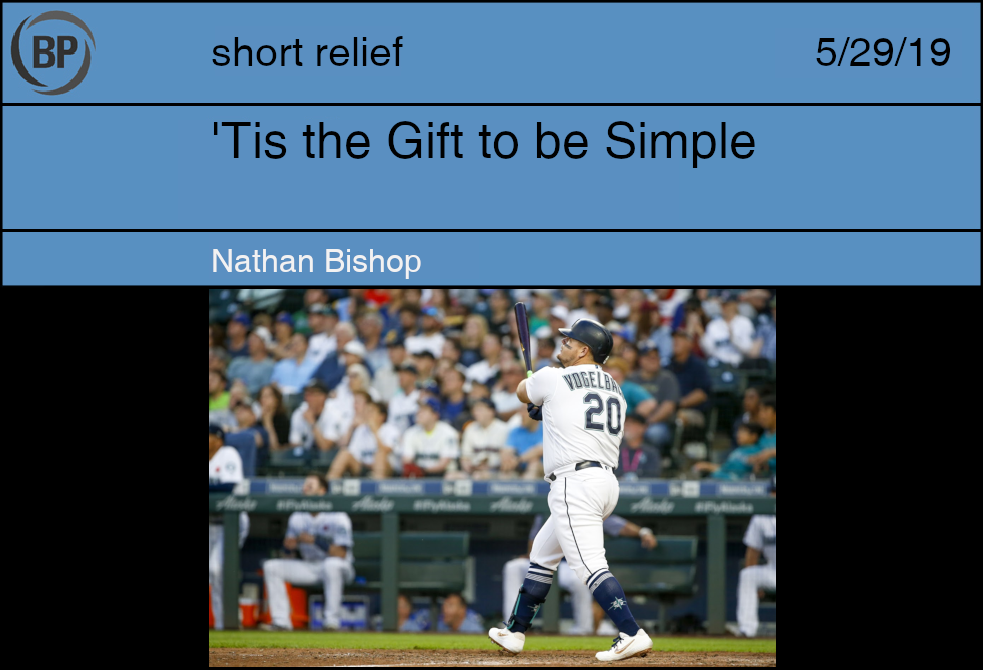 Amidst the eternal wellspring of teal-tinged miasma that is Mariners Baseball, we see an example of perhaps baseball’s oldest and most timeless scripture: You never know what you’ll see at the ballpark. We see it in Jose Leclerc trying to spin a 3-2 backdoor slider to Daniel Vogelbach, having that slider slip out of his grip just so that the break of the ball does not find its usual bite down and left, but rather soars gently towards the middle of the plate, as though caught in a warm, pleasant updraft.

A pleasing illusion of baseball is that a mistake pitch seems stuck in time, gently wafting its arduous, lustful curves into the middle of the strike zone, tempting viewer and batter alike. It does this while still moving at a rate of speed almost decidedly too fast for you or I to barely register it. The ability to move in slow motion at nearly 90 miles per hour is, as I said, an illusion.

As I was saying, before I got distracted by lustful baseballs: Leclerc’s slider sat, its thicc butt (sheesh. Stupid sexy baseballs) right there in the part of the strike zone he did not want it in, and fellow thicc butt Daniel Vogelbach absolutely clobbered the heck out of it.

We love home runs because they score runs and help win games, sure, but we mostly love them because it’s extremely pleasing to see how far a human can smack a baseball with a wooden bat, and we have a preconceived idea of what that entails. A massive, all-time dinger isn’t some perfectly efficient mixture of launch angle, exit velocity, and backspin sent hither into the shapeless void of, say, Great American Ballpark. No! A True Dinger requires drama. It must tower over its audience, and linger at the same divine altitudes mankind sought to achieve with its cathedrals, and for the same reasons. It should not land simply far away from home plate but somewhere….else. Somewhere we’ve never seen baseballs land. Places we never conceived they could go. All this and more was found in Vogelbach’s Memorial Day Mash, and for that it was a truly timeless tater.

In his write up for Deadspin, esteemed writer Samar Kalaf lamented Statcast being down for the night’s game a “cruel twist”. I do not agree. Statcast would have transformed something magical, something we can talk about the way crazy people talk about Mickey Mantle’s home runs, into an impressive but still mildly disappointing set of very real measurements. Without them, we can say whatever we want. I’m saying that Vogelbach’s home run left the bat at 129 MPH and went 512 feet. It’s the first time a Mariner has ever reached the upper deck of right field during a game, and such a feat deserves gaudy numbers. Nothing and no one can prove me wrong, and it’s the story I’ll tell forever. An amazing accomplishment, with just enough of my own bullshit to make it memorable. I’m very happy about all that. It’s baseball just how I like it. 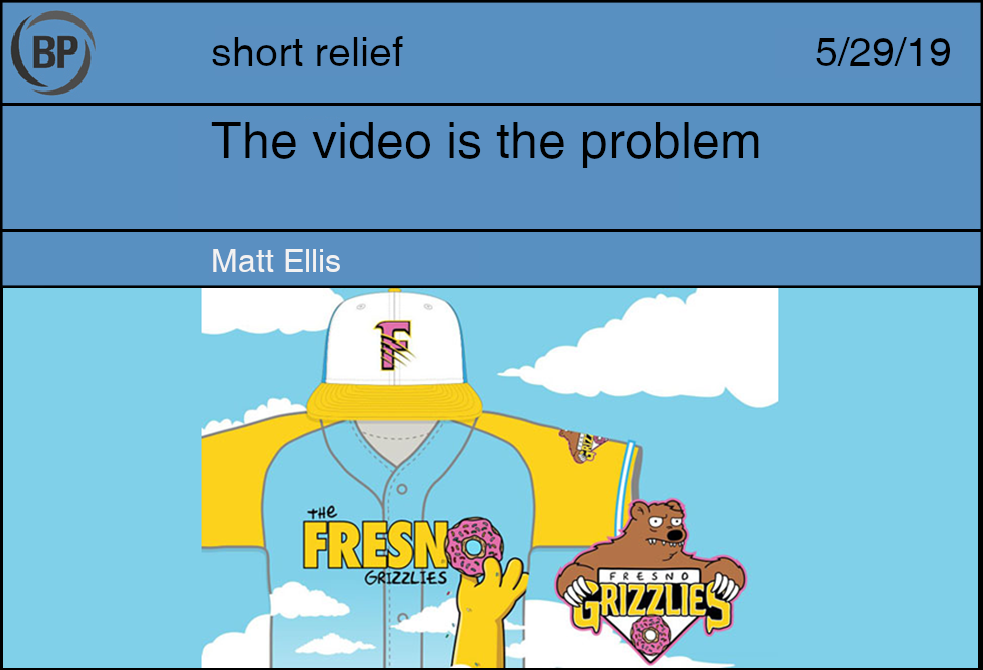 Over the holiday weekend, the Fresno Grizzlies–the Triple-A franchise of the baseball team housed in our Nation’s dear Capital–did what any minor-league baseball team does on a holiday like Memorial Day: they played a video on the outfield screen that some poor media intern found to celebrate the occasion.

Except, as it turns out, the video in question wasn’t exactly an icon of American pluralism come to life:

We’re embarrassed we allowed this video to play without seeing it in its entirety first. We unconditionally apologize to Rep. Ocasio-Cortez (@AOC) in addition to our fans, community and those we hurt. It was a mistake and we will ensure that nothing like it ever happens again.

By now the takes of this incident have made just about every major media platform imaginable, from the Washington Post to Deadspin. All accounts tell somewhat of a similar story: what at first seemed like an innocuous video celebrating the American values we all hold dear–honor, loyalty, bravery, sacrifice, etc–quickly gave way to an odd segment our imagined intern missed in which the “enemies” of the American republic were trotted out for all to see: Antifa, North Korean Supreme Leader Kim Jong-Un, and most troublingly, freshman congresswoman and beacon of the new (New) Left, Alexandria Ocasio-Cortez. 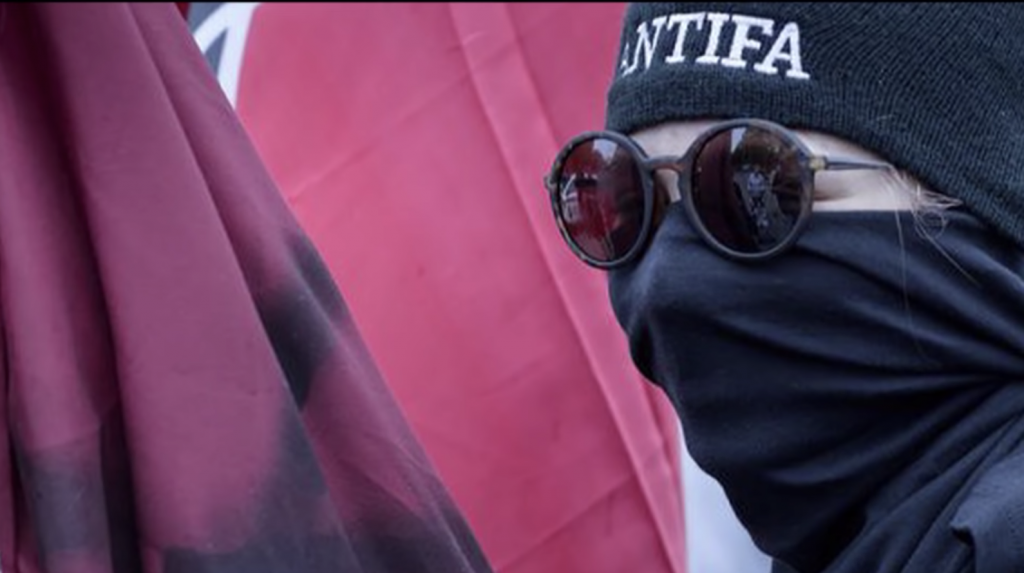 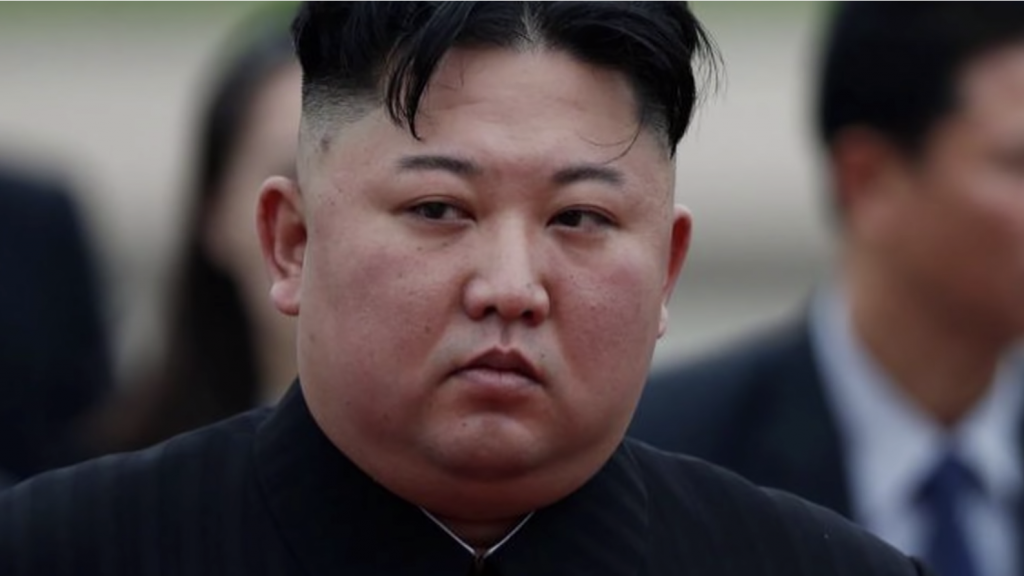 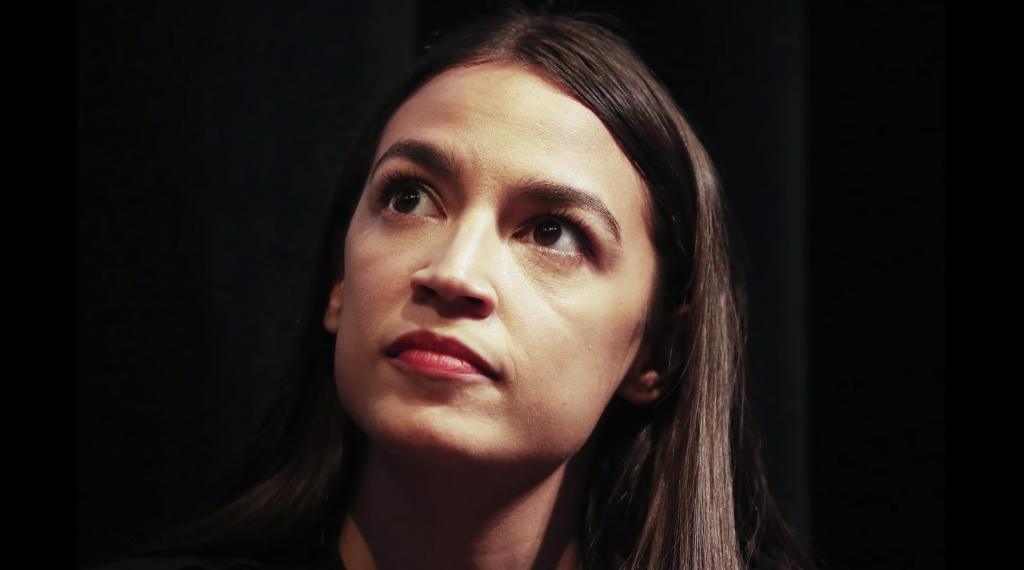 (stills from the video, over a speech from Ronald Reagan denouncing the “Enemies of Freedom”)

The story given by the Grizzlies and echoed by news reports says the same thing: we didn’t watch the whole video, and would have known not to play such incendiary material had we actually done that! or We are shocked to learn a video that depicted patriotism and honored the sacrifice of our troops–all apolitical concepts–would stoop to such lows and partisan attacks! The Grizzlies then apologized to Ocasio-Cortez and denounced the “offensive editing” that led them to make such a mistake. The editing, to be clear, is offensive, but only aesthetically–the problems here run much deeper than mere formalism.

There are a number of ways one could approach this story, of course, all dependent on where one sits on the political spectrum. That is not my business to parse out here. Perhaps one could point to any other number of controversies unearthed by Minor League Baseball’s more rough-and-tumble approach: an unregulated league with nonunion labor making its home more often in rural America, a league that has one “What About White History Month” promotion days after a racist mass shooting for each fun “Pawtucket Hot Weiners” night. Major League front offices–situated as they are in major urban areas with billions of dollars of marketing liability at least–respond to these kinds of crises faster and with more might than a subsidiary operating with trickling house money and a long-distance phone call to the mothership made in Iowa.

But another approach would be to think about any of the recent cultural controversies surrounding Major League Baseball in recent years, from Adam Jones bringing attention to Boston’s culture of racial animosity after being repeatedly taunted at Fenway, to the Chicago Cubs’ ownership’s close connection to the Trump campaign, to the Seattle Mariners’ ushers telling a lesbian couple to stop…apparently being people who know each other in case it would offend “family friendly” attendees (the real offense, of course, was what was happening on the field that day).

In this scenario, the well-meaning liberal commentariat notes the hypocrisy of supposedly woke front offices operating in Modern Cities like San Francisco and Denver, with their requisite pluralism and open tolerance in the twenty-first century. Phrases in disbelief are uttered: “…in 2019,” or “…in this day and age,” and maybe something is said like “it would be more understandable had this happened in KANSAS,” or the like–those backwater nesting pots which bring up new rookies each year to appease the big city fans with disposable income. As long as they don’t have to live in the boonies themselves.

I wonder what it would look like to take seriously the fact that every Minor League Baseball team in America is affiliated with a multi-billion dollar profit-making enterprise in an ostensibly “liberal” city, and to recognize that every big-league PR crisis bleeds down to decisions made by their minor league affiliates. That placing blame on geography obfuscates the actual power mechanisms at play. The Baltimore Orioles didn’t play this video for their Memorial Day game this weekend, but it’s not because they found it gauche, or un-American. It’s because they had access to money to give them their own video content–telling the same exact story as the Fresno Grizzlies’ video–without relying on random YouTubers to muddy it up by making what’s implicit explicit.

It seems clear that moving forward the Fresno Grizzlies will do all they can to stop such a thing from happening ever again. Whoever found the video, I hope, is embarrassed, and assuming it was a mistake, will be very careful moving forward in their job from this day forward. But a question is worth asking why the first few minutes of the video were good enough for Minor League Baseball, why they were probably also good enough for Major League Baseball, why they set off no alarms with the narrator in question, the content in question, the images in question. It’s worth asking why the video took the turn it did–as if it had a consciousness of its own independent of the programmer–and why the turn wasn’t predictable in those first few seconds, and perhaps, most importantly, why it was the Fresno Grizzlies who made this mistake instead of the Washington Nationals, inoculated as they are from the worst PR decisions, playing in a city which represents better than any other the icon of our split society, rudderless, still inchoate, occupied and confused.