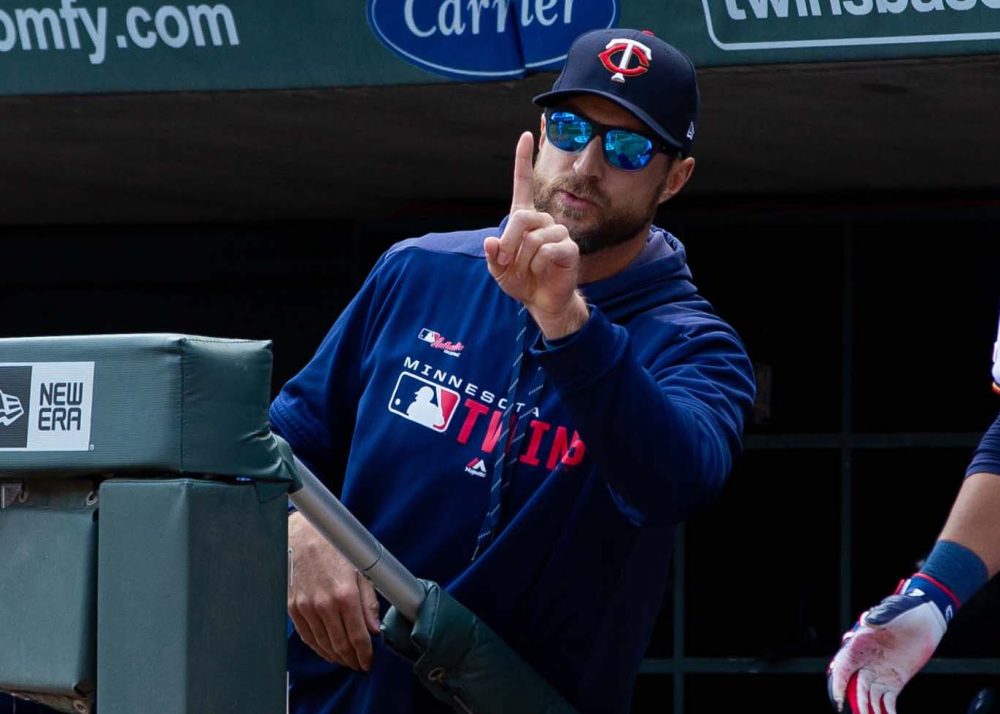 This is an article about time and distance (and marriage).

Minnesota jumping out to a 10-game lead over Cleveland in the AL Central got me curious about how often teams build a division lead of double-digit games before the calendar flips to June. However, because “before June 1” isn’t an apples-to-apples comparison historically — for example, Opening Day was March 28 this year and April 6 in 2012 — I decided to swap “before June 1” for “within the first third of the season.” Same basic idea — holy crap, they have a 10-game lead already?! — but more consistent context.

With the help of Rob McQuown and the BP stats team, here’s a list every team during the divisional era (1969 to present) to have a division lead of double-digit games at any point within their first 54 games:

Pretty rare! This year’s Twins are the 10th team to build a double-digit lead within the first third of a season in the past 50 years.

What happened to the previous nine teams? Here are their regular-season win totals, along with whether or not they won the division title, the league pennant, and the World Series. 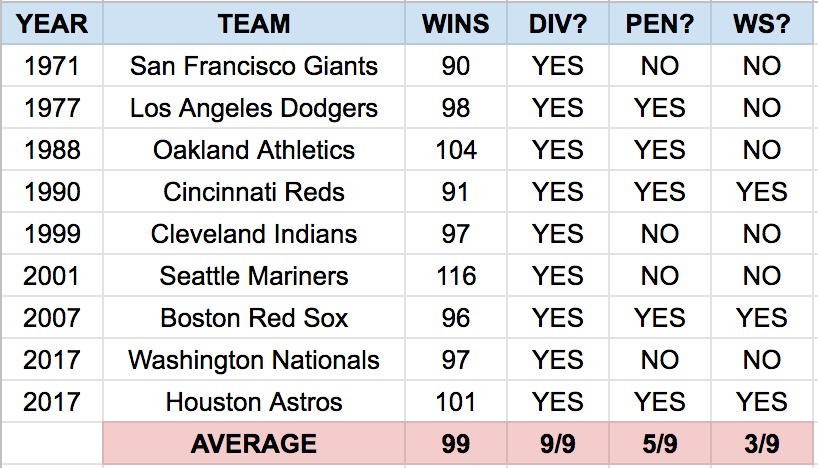 Every team since 1969 that’s built a double-digit division lead at any point within the first 54 games of a season went on to win that division. In doing so, those nine teams won an average of 99 regular-season games. Five of the nine teams advanced to the World Series and three of them won the World Series. How you view those numbers is subjective, of course, but given the unpredictable nature of the playoffs, those are pretty good overall results, even for what is admittedly a group of particularly good teams.

BP’s playoff odds currently give the Twins an 85.5 percent chance to win the AL Central and project them to win 95 games.

I thought the Twins had a very good offseason, albeit one or two pitching moves short of ideal, and I picked the over on their 84.5-win betting line. I also picked them to make the playoffs as a Wild Card team and figured they could plausibly win the AL Central if the Indians faltered. I say this not to suggest I was right about the Twins, because I wasn’t. No one was “right” about the Twins. Even my relatively optimistic view was so far below what has actually occurred that I might as well have picked them for last place.

Not only do the Twins have the best record in baseball — along with the best run differential, the largest division lead, and the most homers — the heavily favored Indians have faltered in such a way that leaves them in danger of not even making things interesting in the AL Central. It took just one-third of the season for the Twins to go from a fringe contender hoping to stay in the AL Central race to amassing such a huge lead that the odds suggest they’ll be able to coast into the playoffs. 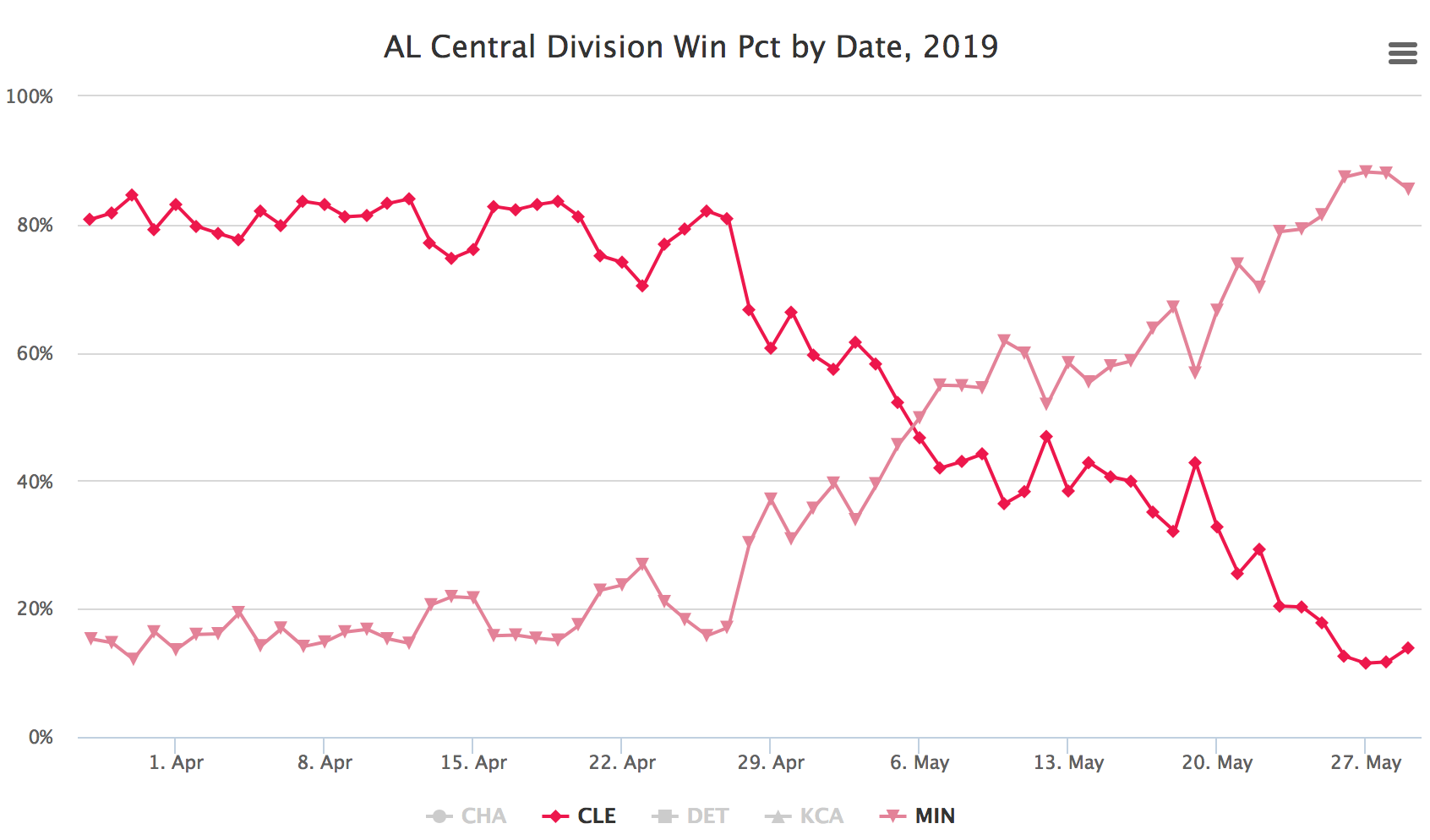 Rookie manager Rocco Baldelli‘s first year on the job was supposed to be about learning — to motivate players, to divvy up playing time, to manage a bullpen, to facilitate the flow of information between the front office and the clubhouse, to deal with the media. Instead, nearly every button he’s pushed has worked flawlessly, and now his biggest challenge might end up being keeping players well-rested and motivated without much in the way of stress down the stretch beyond trying to secure home-field advantage.

I realize all of this probably seems absurd to say about a team that hasn’t won a division title since 2010, has the league’s worst overall record this decade, and hasn’t won a playoff game since 2004, but it’s almost as if the Twins skipped several steps in the whole process of becoming a contender. Don’t get me wrong, Twins fans certainly aren’t complaining, and no lead is large enough for Minnesotans to ever assume sports will end without pain, but a 10-game lead before June 1 is plenty absurd too.

Baldelli no longer needs to wring every last win out of this team at all costs, and in fact he may be better off giving out extra rest, trying inexperienced players in expanded roles, and generally taking a big-picture view of each decision. Similarly, any midseason pickups pursued by the Twins’ front office can be focused less on adding depth that might help the team get through the dog days of summer and more on bringing in players with the best chance of making a series-changing impact in October.

Watching the Twins bludgeon opponents into submission on a daily basis is incredibly fun, and they should absolutely try to run away from the Indians and toward as many wins as possible, but if, say, skipping a Jose Berrios start or giving Byron Buxton an extra day off potentially increases the team’s odds of being at full strength come October, that’s really the goal now. This year is no longer merely about how the Twins can get into the playoffs, it’s about how they can arrive there playing at something close to their peak.

This has all played out like a Hallmark Channel movie in which the Twins and the AL Central meet for coffee and then immediately get married. Everything seems right on the surface. They’re so perfect for each other and surely destined for a long, happy marriage. But all that fun stuff in between is missing from the experience and it feels suspiciously … easy. Years from now, when anyone asks about how they fell in love, they’ll have a pretty thin meet-cute story and not much depth.

But the thing about most relationships is that once you achieve matrimony, no one really cares how you met. Those stories are for the engaged, the fiancee’d. Once vows are spoken and you smile for the camera, maybe break it down on the dance floor and get roasted in a toast, the questions turn to children and houses (that Ruth built). It doesn’t matter how you got here, it matters where you’re going. There can never be a June 1 guarantee on that front, but a 10-game lead sure invites dreams of growing old together.