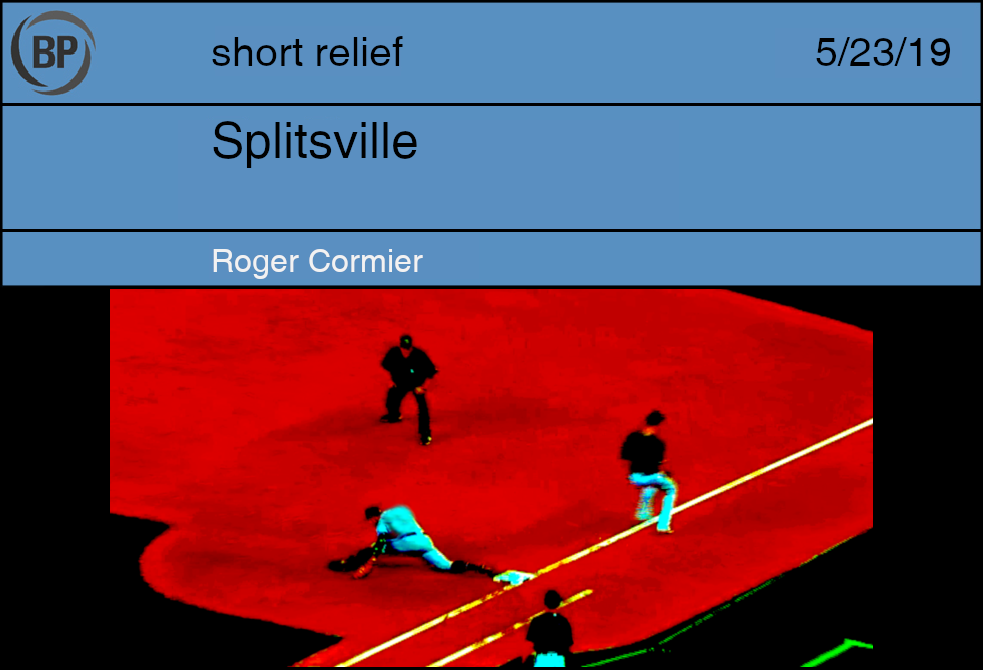 Oh my goodness. You did it.

You did a split.

Is it an Olympic-level split? Probably not, no. It is close enough, though. It looked at the task at hand and completed it. Often that’s all you could ask for. You don’t understand why the word ‘serviceable’ has a whiff of insult to it.

Maybe some folks will think it was worthy of floor gymnastics, and your necessary baseball attire was obstructing the true nature of how damn good your accomplishment was. Yes, you could hang your hat on that possibility. The hook of that possibility is as sturdy as the ones found in meat lockers. That hook is so strong it could make a song with the lyrics “cake by the ocean” an earworm for years.

Here’s the deal: don’t turn around.

The runner is probably out. In a just world, he is out. He is humbled. He returns to the dugout, to the clubhouse, to his car, to the airport, to his childhood home, where he spends the rest of his life trying to forget how he screwed it all up by not trying as hard as you.

But you know better.

He might not be out. He might be safe. So what? You did your best. Look at you. Did you ever in your wildest dreams think you could contort your body like that? Your guidance counselor said you couldn’t. Remember that? He didn’t say that, of course. Not in those words. Not in those words in that order. But he communicated as much. But you put the work in. And you became a version of yourself that could do a split. You put yourself in a situation to succeed, and to look damn good doing it. Are you going to find two 18-wheelers and JCVD yourself? No. You didn’t lose your damn brain.

You didn’t lose anything. You won. Out or safe. The scoreboard lies, sometimes.

Oh no, the umpire is about to say something.

Are you ready to not care?

Of course you are ready. 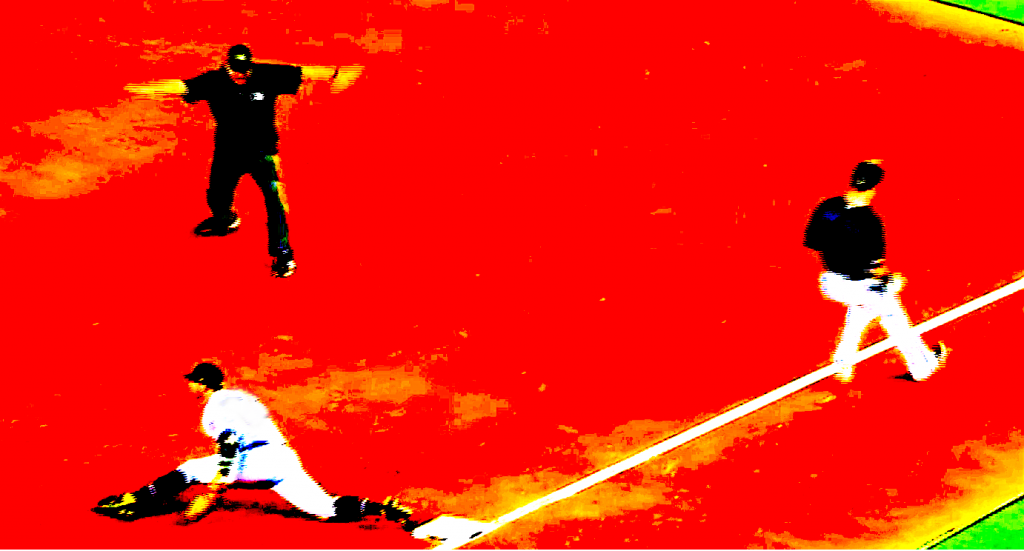 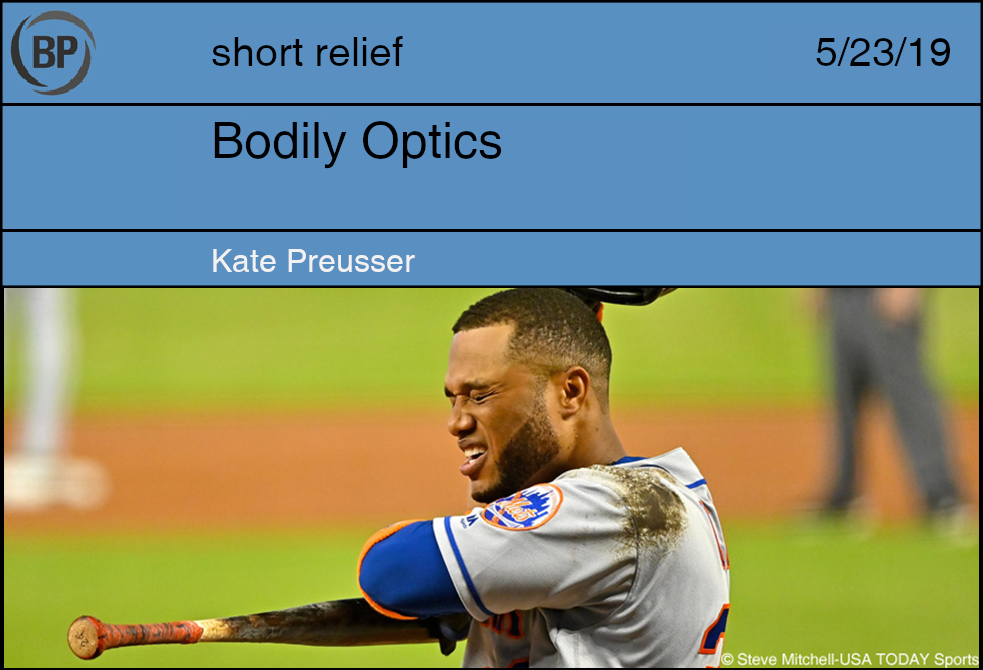 A terrible look for Robinson Cano, who has hit well the past two days, in grounding into an inning-ending double play in the seventh.

Two on, one out, tapper back to the pitcher — a seemingly simple play that gets messed up all the time. Cano jogs, barely, to first.

Robinson Cano leaves the Mets’ game with the limp; looked like he might’ve had some sort of hamstring issue.

So Robinson Cano gets put on blast for not running out ground balls, is benched, told he needs to run out plays, runs out a play today…and leaves with left quad tightness.

You can’t make this stuff up.

One of the very few gifts of getting older is you learn your own limitations. I know that if I want to do yardwork and not be reduced to a mewling pile of pain, I can bend over and pull weeds for the length of one (1) standard podcast. I know that I’m susceptible to calf pains and can experience tears (and tears) if I don’t take extra time stretching them out before exercise. I know that a canker sore means I’m about to get sick and to start swallowing handfuls of zinc and vitamin C, that choking up at phone company ads means I’m premenstrual, that when my skin feels dry I should put this cream on it, and when it feels oily this tonic. I know to put extra sunscreen on my shoulders and to stretch out my arches before bed or I’ll wake up with terrible plantar fasciitis. I’ve been granted this knowledge through the long tenure of living in this particular body with its ancestral-manse quirks (beware the left big toe, it’s quite haunted).

But because I am a woman, and live in the world, I’m still regarded as a tenant-farmer over this body rather than landlord of it. The doctor intimates that any health problem I have could be solved via diet and exercise. A therapist I saw once suggested cutting out alcohol entirely would cure the deep dissatisfaction I felt with my job, relationship, and living situation. Since my mid-20s, I’ve had family and friends alike–good friends, friends I considered allies–tell me that despite never hearing the slightest tick of a biological clock, one day I’d wake up in magical Mommy Mode. Once I was selecting a box of frozen toaster pastries at the store and a woman flew at me from down the aisle to admonish me about how I should just eat toast with jam for breakfast (look lady, last I checked toast doesn’t have a squeezable frosting packet).

Being a woman and being a professional baseball player have this in common: spectators feel entitled to comment on how one’s body looks and changes and moves. In his four years in Seattle, plus assorted time in New York, I estimate that I’ve seen Robinson Cano run out a grounder to first approximately 1,232 times, most of those in his mid-30s. Never has it once occurred to me that I, not a professional athlete nor Robinson Cano, know more about his body and how it works than he does.

What I do know about Robinson Cano is that he has a preternatural understanding of where balls go once they strike a bat, and what the probability is that they turn into hits. I’ve watched Cano stand, annoyed, idly in the box when everyone–the radio announcers, the pitcher, every fan in the stadium, the peanut vendors–have been convinced a ball was going out, only to see it land just shy of the right field foul pole. I’ve watched Cano and never questioned that he knows his body and its limits, trusted that he’s performed the same mental math I do when assessing how many bags I can carry in from the grocery store at once without cutting deep grooves from the handles into my forearms, grooves that don’t bounce back like they used to. I would never expect Cano to pick out the right cream for the suddenly crepe-y skin under my eyes, like I would never insist that his body do something he didn’t feel it was capable of doing. I guess that makes the two of us, then. 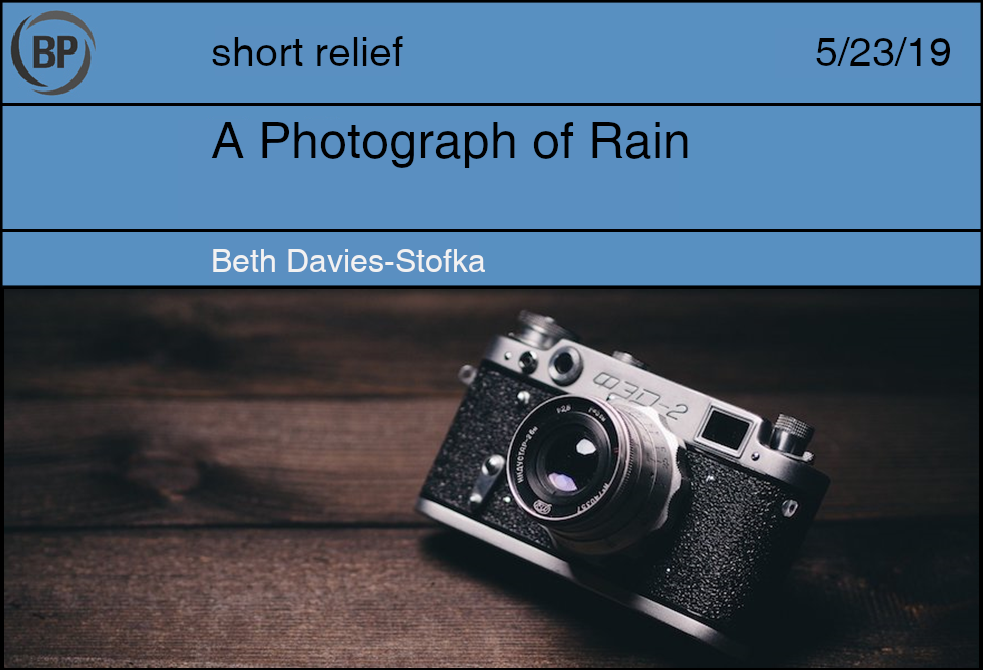 Two men, pitcher and catcher, approach each other, hands outstretched. In just one moment their hands will clasp and in that gesture they will say, “Brother, I’ve got you.” This is a muted, insular moment. These men know disappointment. It lies behind and ahead and they know it. They are not the type to leap about the field because of a Saturday win in May. There will be joy in the visitor’s clubhouse, but for now, they congratulate each other. They say, yes, we did it. They make a promise to each other. For whatever lies ahead, a simple vow. “I’ve got you.”

Their faces are masked, one literally. Their feelings are masked, one literally. Yet illuminated by rain, we are privy to their intimacy. We heard and understood their silent, three-out dialogue, the signs that traveled a circuit built from plate to mound and back again, through air, noise, and rain. We followed the carefully-constructed sequence through which they conspired and won. Now, we see them meet. Wet, gloves down, they are going to shake hands. An older brother, hand out, lifts the younger. You did good. A younger brother, hand out, receives the older. I am ready. Together they say, “We did it, well done. I’m strong. I’ve got you.” Adversity is best when shared. 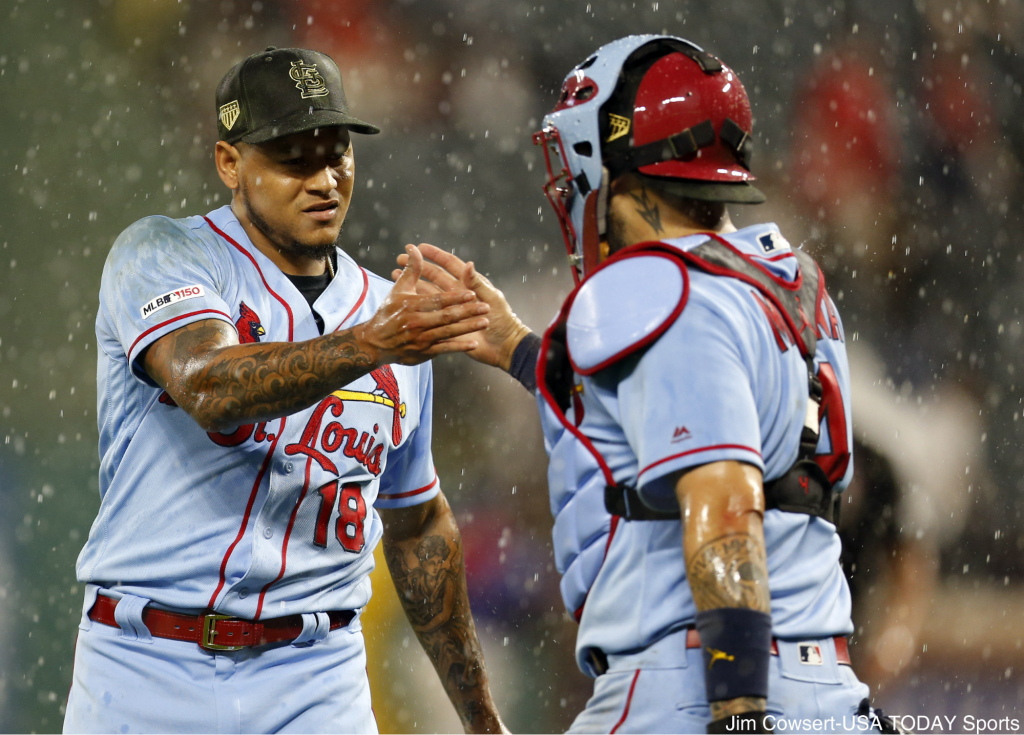 It got dark in a hurry, the announcers said. It only took three minutes. Why now, and what’s the hurry? Carlos Martínez was hurt, on the IL. This is his season debut, but as soon as he starts pitching, the rain picks up. It falls hard as if it understands how much he wants to come back. Martínez strikes out the first batter and the drops grow in size and breadth. The ball becomes slick, hard to control. Martínez hits Danny Santana and then, not impassive, crouches on the mound and is soaked as Santana is helped off the field. The rain comes even harder when a pinch runner arrives to take Santana’s place. Everyone feels the urgency to finish, and Martínez induces a double play. Twelve pitches, his team wins, and the rain comes pouring down.

Rain, determined to be part of the story. Rain, polished to a perfect shine. The fat, white bomblets dance in the air and glisten on the skin of Martínez and Molina, spackling a moment that recalls a return to the mound, adversity faced, and hands on the verge of eloquence. “Brother, I’ve got you,” the photograph says. Rain or shine.