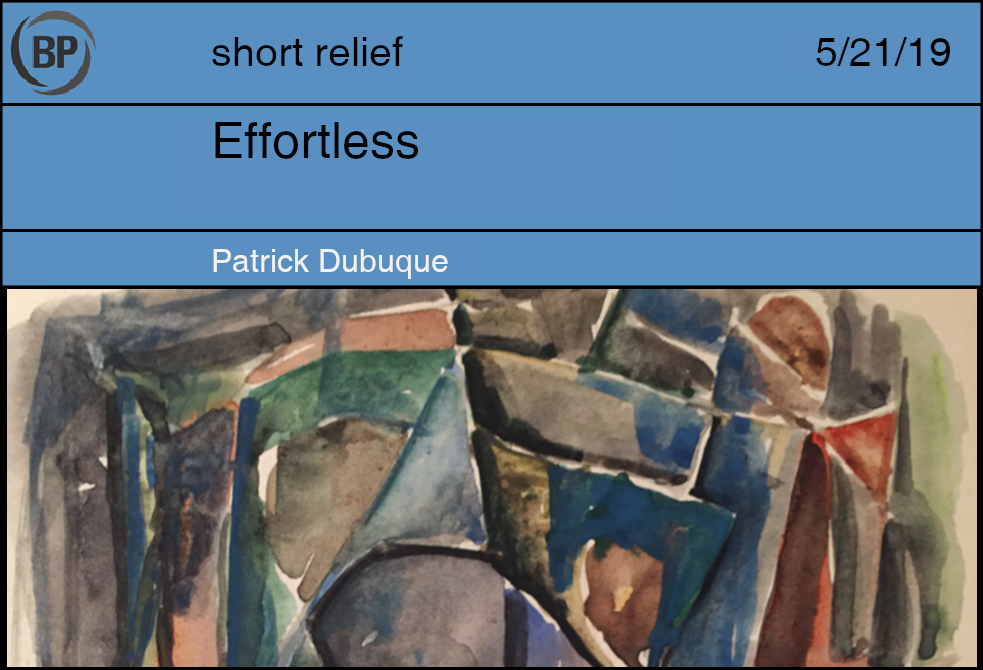 Last weekend, as I cleaned out my parents’ basement, I discovered a notebook not much bigger than a baseball card, the leather aged into plastic. Slipped into the front pocket is a little card, bearing a signature beneath the words, “The Museum of Modern Art, West Fifty-Third Street, New York 19, N.Y., Vern Mittlestadt, Date of Expiration: December 3, 1949.” Beneath it is the tuition ticket, $223.00, for a year at the Pratt Institute. The book contains the notes of that year of study, written perfectly straight on unlined paper, the handwriting shifting between paragraphs.

I find myself increasingly interested in art as I grow older, despite a near-complete ignorance on the subject. My artistic abilities carried me to a pair of Bs in high school, where I laughed with friends as I stippled a picture of Rickey Henderson copied from a local magazine. My father met and befriended Vern while he was stationed at the local army base in the early days of Vietnam, and many of his paintings now adorn my own walls. Many of our guests shrug when they see them; they’re the stereotypical modern scribbles, the kind of art that a child can do (except that none can). But separate from the works themselves, or the man I knew as a child, these notes on artistic theory, forgotten and freed of context, elevate to the level of the arcane.

It begins with rudimentary details on woodwork and moves into design: a radio? A speaker? “Sense the essence of each problem,” he notes. “Have an attitude toward any problem, or assume one.” He leaves wood behind (“Do not make wood do, what wood cannot do pleasantly,” he parts with) and me soon after. Tiny, neat diagrams begin to pepper the notes, annotated with cautions such as “Tension: dynamic pull of design. Tensions should not be similar – major and minor tensions.”

And another line, clearly at the end of a day: “Too many of you are realists. CREATE ARBITRARY MOVEMENTS.”

The instructions themselves are (to me) meaningless, except to demonstrate that even the simplest and most confounding of art, so common in the post-photographic age, is made with intention, and in fact the intention to make itself look easy, to instill the artist’s training so naturally that the viewer never even realizes the labor. It is, I think, a very rational outlook to take upon the path of a slow curve or a lazy, short-porch home run. The beauty of art isn’t something ephemeral or hopelessly intangible; it’s very real, just buried deep down beyond the depths of what we can measure. Thank god we don’t have to play baseball, or paint, to see it. 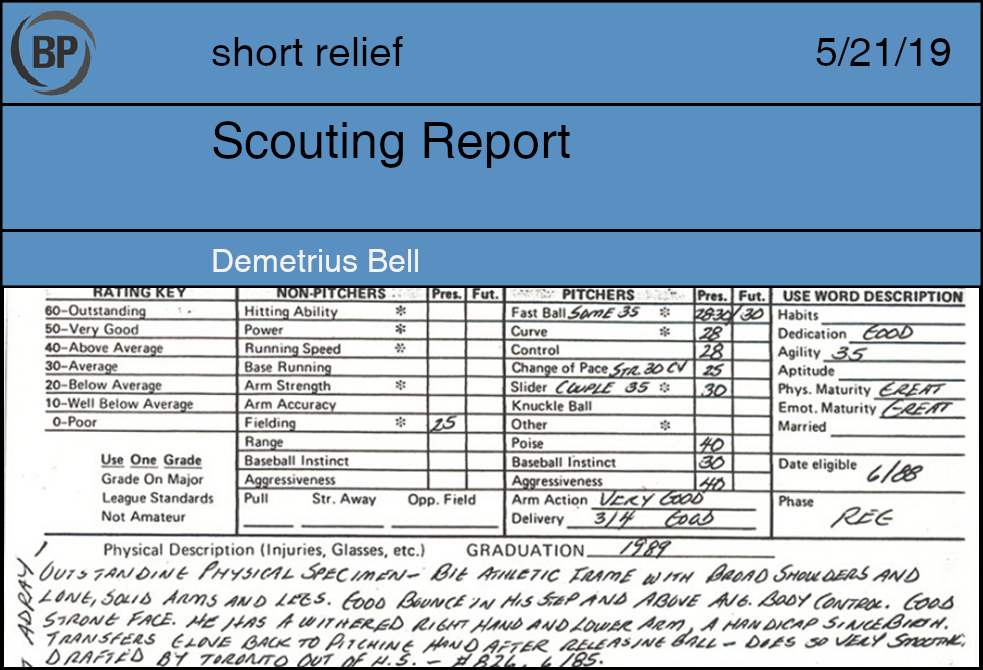 Over the years I’ve grown into a massive baseball fan, despite the fact that I didn’t play the game too much growing up. My closest experience in high school was when we got on the baseball diamond for a class of P.E. and I asked one of the baseball players to throw me a pitch. The result moved all over the place with the velocity of a speeding bullet, and that was when I decided that baseball wasn’t for me. Running into people on Friday nights was better than trying to hit whatever that nonsense was that the other kid tossed at me.

This was a recurring theme of my time playing baseball as an even younger kid. I played for a couple of years and according to my own personal scouting report that I am retroactively writing for myself, there were two things that were certain when it came to my baseball ability. I could hit the baseball a country mile, but that was only when a miracle happened and I actually made contact with the ball. To this day, I still remember one of the umpires offering to get me a free meal if I even got one hit in the game. I didn’t get the snack. Thankfully, that was the first time I learned how to laugh off failure, since I realized at that point that I was playing more for a hamburger than I was to actually win a game.

Although I couldn’t make contact to save my life, I still loved being at the plate. That part of the game was thrilling. What wasn’t as much fun to me was having to actually catch something flying towards your face. That’s why it was a foolish decision for me to try playing catcher. After I decided that squatting and having all that responsibility behind the plate wasn’t fun, I got moved to the outfield. That’s when I got hit with what I figured was a line drive. It wasn’t a liner; I was just caught out there not paying attention and got socked in the face. That was the exact moment when I decided that playing this game that I loved to watch was not for me.

Things have come full circle with me and the game I enjoy so much. I’m writing about it on a regular basis, I’m watching more games than ever before (in both the majors and in the college game) and even my nephews are playing it. The latter part is what excites me the most, and I hope that they’ll both stick with it for a while. At the very least, I hope that none of them will get smacked in the eye and decide that football is the way to go. To paraphrase Jay-Z, their uncle did that, so hopefully they won’t have to go through that. 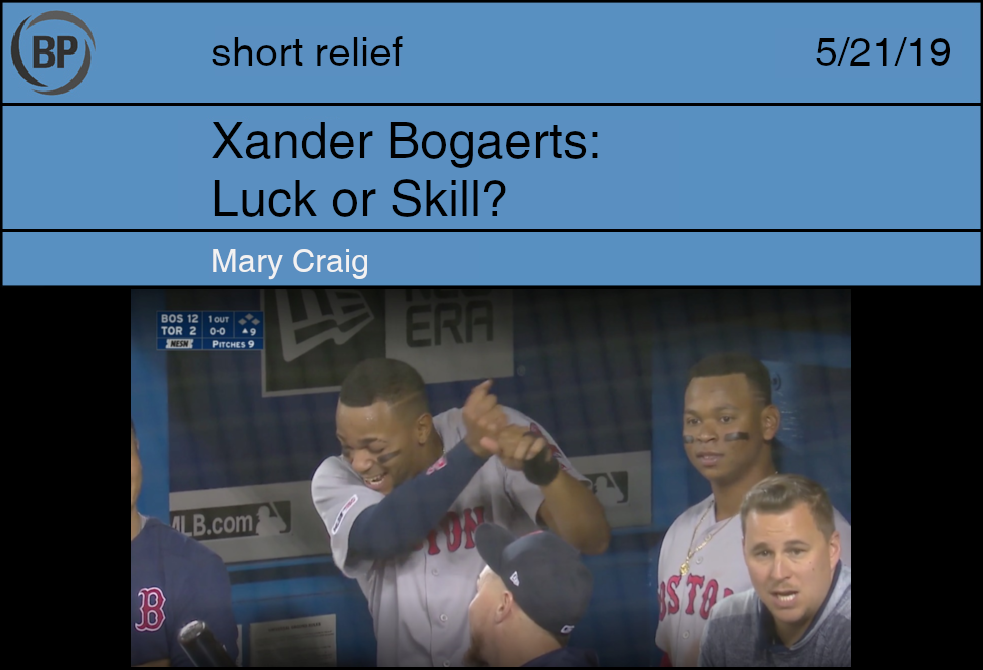 In the top of the 9th inning of Monday’s Red Sox-Blue Jays game, Xander Bogaerts described to his teammates the final swing of his at-bat. He incredulously mimed shutting his eyes and swinging defensively at a pitch up and in. This swing, of course, resulted in a second-deck home run.

Infielder and manager Buck Herzog always poopoo-ed the notion that baseball involved anything other than skill, claiming that to do so was to fail to properly acknowledge the players. Babe Ruth took up a different view, arguing that baseball requires both more skill and luck than any other sport, citing the difficulty of hitting a home run and the luck of hitting a grand slam. After a particularly sloppy win in August of 1955, manager of the first-place White Sox, Marty Marion, joked that baseball involves far more luck than skill.

Indeed, baseball’s advocates frequently point to the sport’s supposedly unique blend of the two as its biggest selling point. Baseball’s not alone in doing so, though, as golf, hockey, and many other sports claim to be home to the luckiest and most skilled athletes. The skill will draw in viewers while the possibility of inexplicable instances of luck will take hold of them. There’s interest in watching the most talented perform at the highest level, but predictability is often boring; there’s no need to tune into a match when the outcome is all but set in stone. Luck takes care of this. Luck provides the opportunity for the underdog to fight back. Luck endears us to athletes beyond those few figures whose greatness is unquestioned. Luck allows for un-noteworthy players to have one or two stories they can tell for the rest of their lives.

Before luck, though, comes hard work and skill. Or, more accurately, before we take note of their instances of luck, players have to put in their 10,000 hours and then some. There has to be Little League games, frustrating days in the batting cages, long bus rides through acres of farmland, and enough self-doubt to last a lifetime. Only when these instances of luck are thoroughly earned do we get to witness them.

Xander Bogaerts signed with the Red Sox in 2009 when he was 16 years old, after spending a decade honing his skills by hitting almonds with a bat. He played in the Dominican Summer League in 2010 before joining the Red Sox’s organization. From there, he toiled in the minors for three years before finally joining the major league team in September of 2013. Since that point, he’s been the Red Sox’s regular shortstop, blossoming into both a reliable hitter and fielder.

It’s impossible to know just how many more than 10,000 hours Bogaerts has spent playing baseball, but it’s enough for me to question whether his home run was truly a product of luck or just the culmination of his two decades playing baseball.

You need to be logged in to comment. Login or Subscribe
allanwood
Ruth was right: there is a tremendous amount of luck in baseball. But a wise man once said, "Luck is the residue of design." ... The more skill, the more time spent working at your craft, the more good luck you are likely to witness.
Reply to allanwood