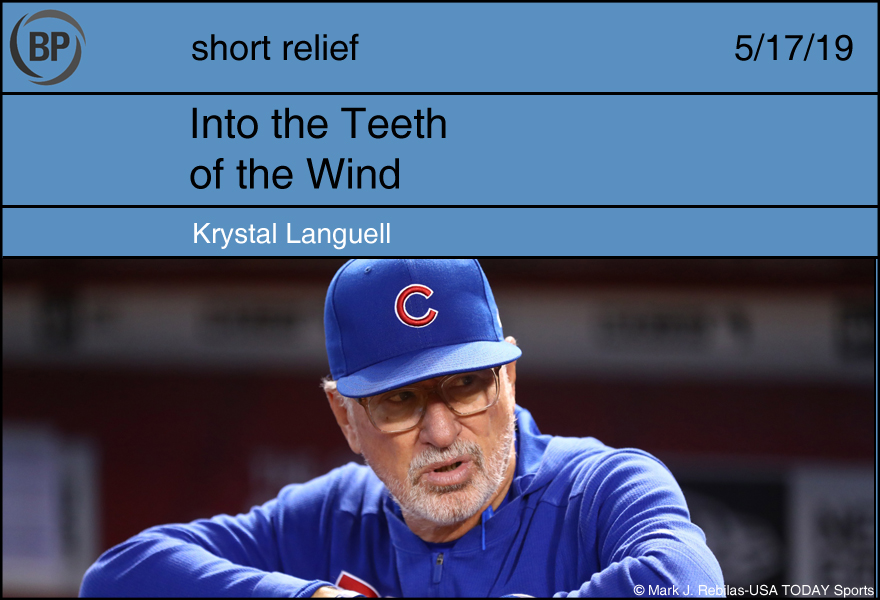 Reunion answers questions better left
alone. What we look like together, on
a team again. If the wind has teeth
it’s not to bite with but rather scratch
from hip down to ankle, to strip one
pinstripe away and chill your flank.

What ever changed except the date
on the calendar. Not you. Still, the
structure welcomes you back even
as we regret the thread that binds us.
A correction to permanence reads:
The new emotions twin the old ones.

The wind has big teeth to scare you
with, and if that doesn’t work how
will we get you to go away again?

A smash to the teeth of the wind,
a celebration, and who recalls the
damage? A bomb, a bullet, a string.
Certain of us know all those sounds
and we hold our noses all summer
as you strut around souring the air. 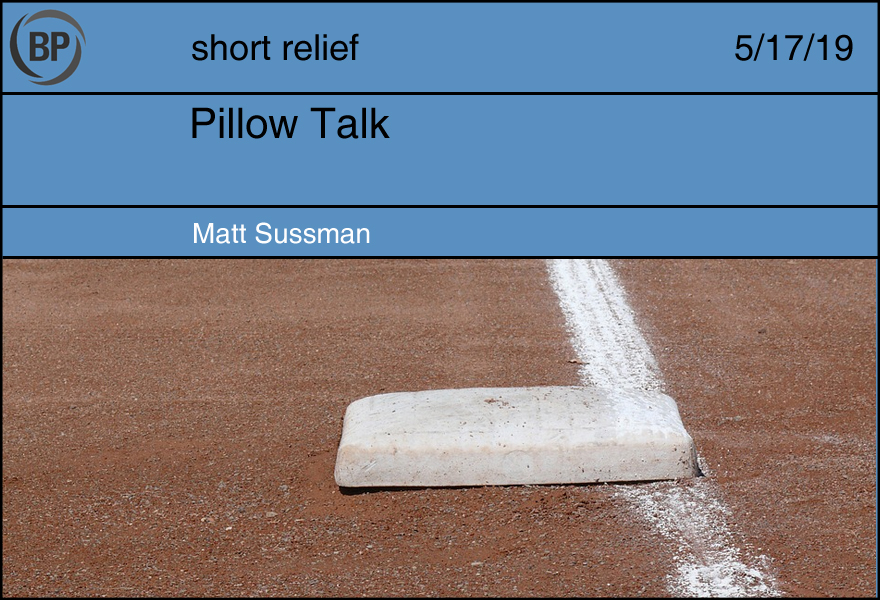 American movie icon Doris Day passed away this week at the age of 97. The second-billed celeb from “We Didn’t Start The Fire” grew up in the historic baseball village of Cincinnati, though little documentation suggests she was much into baseball. We would not have blamed her, as the Reds didn’t win a World Series in her lifetime until she was a teenager in 1940. Still, that didn’t stop her from touching the lives of several Americans, including baseball fans, with notable contributions.

In one of her earlier films, The Winning Team, she played Aimee Alexander, the wife of Grover Cleveland Alexander (portrayed by Ronald Reagan). The film included a few cameos of real life ballplayers (including Hall of Famer Bob Lemon), all of whom played fictional ballplayers and it’s safe to say they probably did not act well except in any possible scenes in which they played real baseball.

This movie, of course, the second most prominent baseball-related Americana that Day left us. The song below is obviously at the top of the list, and it’s still relevant today.

When I was finally in the major leagues
I asked the bench coach about the shift
Should I try spraying
To all the fields
He replied (and was rather miffed):

Now I’m retired from the game
They ask this player, what will I be
Should I make contact
Should I reach base
I tell them tenderly

“K’s are up, are up
Increasingly more than in my day
The fielders just sit and play
RBI Baseball on their phones
Because it was the only game
That let you make contact
And score an inside-the-parker
And even though
this song lost its harmony three bars ago
K’s are up, are up” 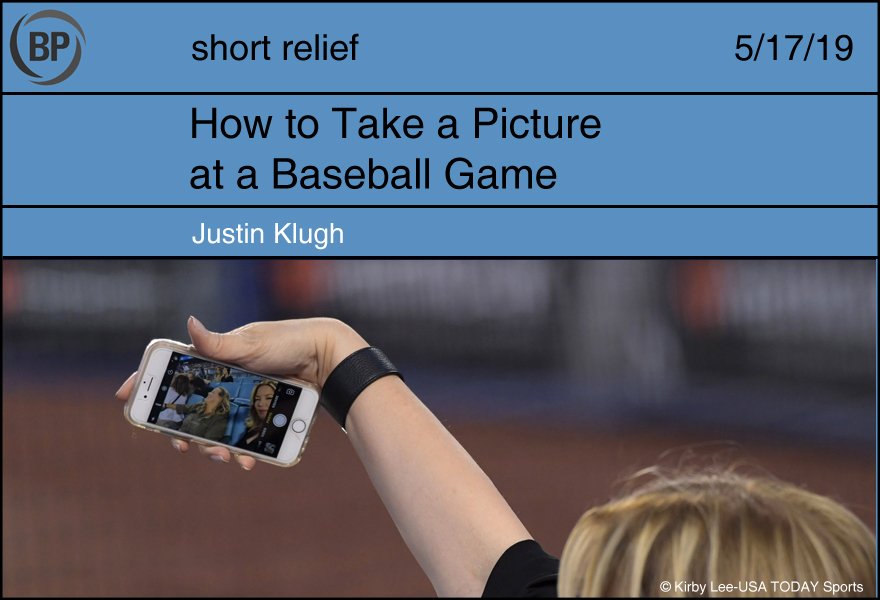 1. Ah, day baseball. The sky a crisp blue, the field a fertile green, the city skyline distant, yet present. This strikes you as a perfect background for some pictures, and you hand your phone to your partner to get a few shots while the lighting is working. Careful not to block anyone’s views, you go through all the classics–touching your hair, hand on your hip, pretending not to look at the camera. It’s corny, but it’s all in good fun. While you’re selecting a filter, the team scores a few runs and the place erupts into cheers. What a fun day at the old ballpark!

2. Uh oh! A video of you posing for pictures was taken by some third party and posted on social media. People are shaming you for not paying attention to the game like a real fan, which makes sense, because you are not one. A sports blog guy named “Carl” has gone viral, posting the video without credit to the original creep, but using a more clever, cutting caption: “Ah yes, who could forget the old baseball mantra,poetry ‘Feeling cute, might delete later’.” You message him, asking him to take it down, and he responds by selling your likeness to a white supremacist dating website. When pressed, he explains that everything he’s done is legal because of fair use and the Patriot Act, but he’d be happy to discuss the issue further if you send along some nudes.

3. Oh god, what’s this? Looks like another message from Carl, but this one is different. It’s from his mom, apologizing for her son’s actions. You scroll down–how long is this? What starts as an embarrassed apology quickly becomes her pouring her heart out about her relationship with her son. She’s concerned about Carl’s grades at college… she wants to be close to him without driving him away… she found a half-empty bottle of adderall in his gym bag with someone else’s name on the label… she’s pretty sure he ran over a nest of bunny rabbits with a lawn mower when he was 13 and he’s never talked about it. She admits to not fully understanding her son, and to a growing desperation to be closer to him. Every year he’s not in the house, he seems to drift further away. Her friends say she’s being smothering, but she discovered his “internet career” last month and, overcome by guilt, she’s been logging into his accounts without him knowing and sending apologies to the victims of his bizarre harassment. You feel a complete understanding for what she’s going through–the simultaneous anger and guilt, despite not doing anything wrong. Her name is Mare, named after the marigolds her mother planted around her father’s vegetable garden. Her mother claimed the brightly colored flowers kept the groundhogs away, but she’s pretty sure the fence her father installed that went a foot and a half deep helped–her mom lived to “add a little color” to things. Regardless, Mare felt as a child that her name instilled in her a need to protect people; first, she protected her child, but upon discovering his online persona of “keyboard shame-weenie,” (her words) she realized perhaps that responsibility now extended to the targets of his limp cyberbullying.

4. It’s twenty-four years later. Your and Mare’s correspondence had gone from frequent to distant over the years, but never stopped. One summer, you agreed it was finally time to meet up in real life; she was traveling to visit her sister and would only be a couple of hours away from you. You agree to meet up at a ball game, for the irony. But a few days before the game, she stops messaging. She doesn’t get back to you until weeks later, apologizing for her absence, but never explaining it.

Today, you saw on her Facebook page what you had long suspected–Mare succumbed to a long battle with illness. The address of the funeral services is provided, and you stand in the back, feeling like you are undercover despite no one knowing who you are. Her son, whose name you realize you do not remember, reads a fully plagiarized eulogy that is the first result when you Google “eulogy for mom.” As the crowd thins, you stand at the headstone, wondering if there was ever a morning when Mare woke up feeling better because she’d known you.

You take a selfie at her grave and send it to Carl. “Feeling cute, might delete later.”

You need to be logged in to comment. Login or Subscribe
Cameron eadie
What ever changed except the date
on the calendar. Not you. Still, the
structure welcomes you back even
as we regret the thread that binds us.
A correction to permanence reads:
The new emotions twin the old ones
( reminds me of life )
Reply to Cameron
clangswell
Thanks for reading, Cameron!
Reply to clangswell