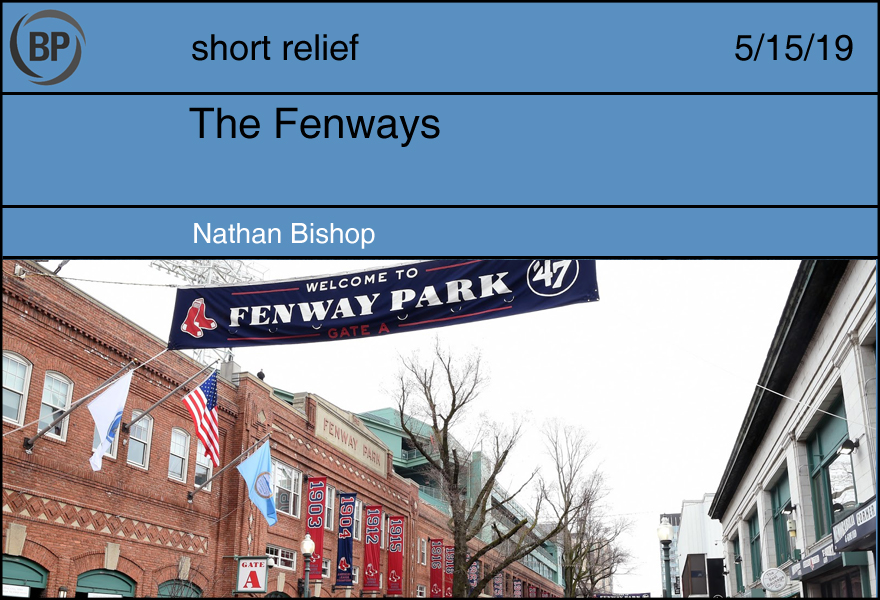 (Recently the author made his first visit to Fenway Park, and offers some thoughts)

Fenway the Museum: It’s a time capsule, which is very specifically different than traveling back in time. Seeing Fenway in 1920, or 1932, or some other year from the Williams/Yastrzemski/Fisk eras would mean seeing it with all the baggage of the times – scant bathrooms, questionable health codes, overt racism, etc. Today we get none (or at least comparatively little) of that. What we get is charming wooden handrails, sunken concrete walkways with low ceilings, plaques, plaques, ever-so-many plaques commenterating people, places, and plays. We get a whole lot of a very specific muted green.

It is a deep inhalement of the past, one very heavily cut with nostalgia, and snorted directly into the portions of our brain that tell us that baseball can make the insane world sane. It is a museum, which is a sort of branded history, but history nonetheless. And it is everywhere.

Fenway the Sitcom: When you stand, adorned in the visiting team’s colors, to catch a foul ball that lands far beyond your reach you hear a thickly-accented voice shout: “Hey buddy did you catch it!?” and an ensuing, rolling peel of laughter through right field. These people know their brand, and you have to respect it. In the quiet moments between innings there’s plenty of softly spoken kindness but whenever the voices are raised it’s to aggravate, antagonize, or otherwise instigate. You are in Boston, pal. As they say, “Whatcha gonna do about it?”

The place is a kind of Cheers-writ-large. Collectively, the crowd knows you came here for an experience, and they are happy to provide it. There’s humor mixed with just enough humanity (“Sorry about that Supah Bhawl pal”) to keep you there, and to think about coming back. Same place, same time.

Fenway the Mausoleum: You sit there, with all that muted green clashing hideously yet perfectly with the bright hue of the grass, all under some absurdly picturesque blueness that you’d swear was created very specifically for this single spot, and you start seeing things. You see Christy Mathewson, Fred Merkle, and Chief Meyers letting a pop up fall at their feet in the 1912 World Series. Somewhere over on the far side of the outfield you can see Manny Ramirez laying out to cut off Johnny Damon’s throw. A few dozen feet to your right, where most would see the Bullpen Cop, you can make out Jay Buhner pinwheeling over the fence, Scott Hatteberg’s hands on his knees, and Dave Niehaus’ nasal-baritone reaching for the heavens.

They spring, tumble, leap, and swing everywhere, these ghosts of history. Memory and dream collide, an orgiastic scrum of your childhood fantasies and Ken Burns’ BASEBALL. Everywhere you look it’s the past, your past. It is a time when nothing felt more important than running and chasing a stupid ball, a five-game deficit was just one hot week from first place, when winning mattered.

Those feelings, priorities, and fantasies aren’t with you anymore. Mortgages, politics, and rising sea levels blocked them out years ago. But it’s nice to know they aren’t gone. They’re right here. You can come back, remember, and pay your respects. 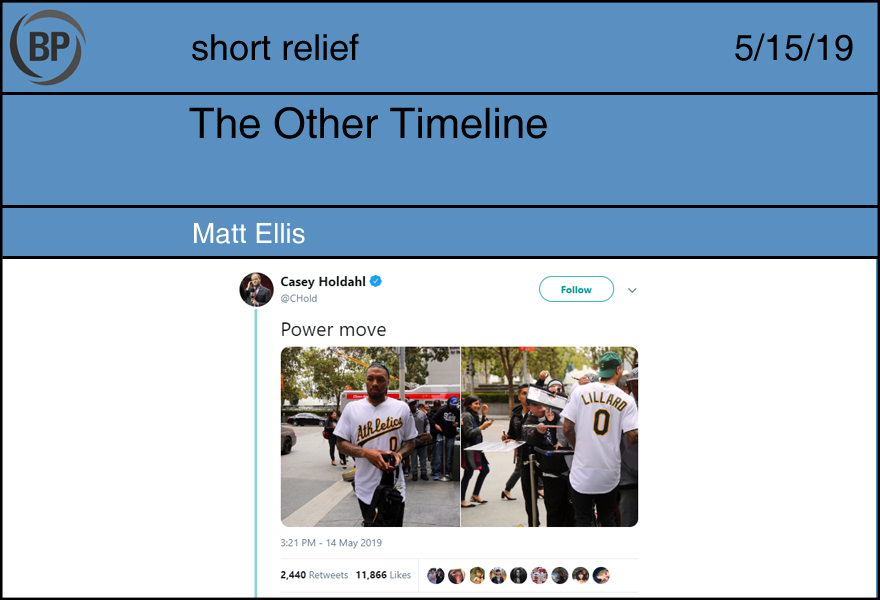 He dove for the grounder, just barely reaching the fair mark at third. The throw sailed through the Las Vegas air, reaching first before the runner, the slap of the leather imitating a sarcastic clap. He licked his fingers and pointed to his shortstop, his first baseman, as if to say he had all of them.

He was hitting below 3 but more importantly was that he wasn’t striking out, each time the bat made contact it found a space on the field that sometimes met a glove and other times didn’t. He was wearing an Oakland tattoo on his chest but nobody saw it because he had three layers above, to say nothing about the phiten necklace he wore around his neck like the weight of history itself: gentrification, racism, America. There was a foul popup an inning later to be had.

When he watched a bunt tip meet the catcher’s glove in the ninth, before sailing to first to end the game, he thought: What would it have been like had I chosen another game, had I done something, literally anything, else?

He closed his glove and watched his Double-A closer try to get the final out, and he knew he maybe had to grab a ball that bled through the corners and he thought what would it be like to have a city identify with me, myself, to have a million people tell me I was what convinced them they were full, contradictory but beautiful people, worthwhile? He put his glove aside and watched the Portland Trail Blazers on ESPN lose to the Denver Nuggets and he saw how sad it was that a franchise that had no concept for the future nevertheless tried to make one. He did that, and taped up his sore ankle, and thought about what it might be like when the Warriors had someone else to call their guy, and he took a sip of a Powerade and went home to sleep by eight PM. 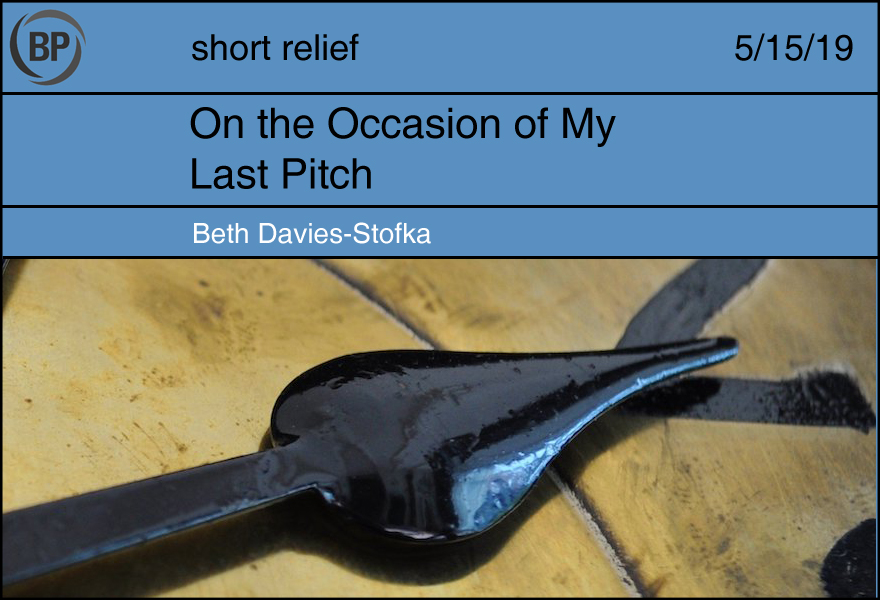 When time is up, what shall I do?
Throw a curve? Will it get through?
Perhaps a fast one, in and tight,
Will claim some space, prolong the fight.

Unless I need to check the state
Of my affairs
And set them straight.

My records, sorry, don’t align,
(I’m a liar, yes, the fault’s all mine).
Past and present, fast and loose
Yet organized for easy use
A decent story they’ll produce:
Of hard work, brown skin, windblown hair,
Of coal and dirt and Sunday prayer,
Of running, throwing, catching where a sandlot, in the open air,
Meant winning. I prepared.

No more hunger, no more mines, no more strikes
(well – not that kind).
Just a nice house for my kids.
Simply that, and nothing more.
I delivered. I adored
those children.
Nothing more.

Now time is up, and time looks old,
His shoulder’s dropped, his bat looks cold.
But don’t be fooled, his stance is wide.
A pitch inside? Already tried.

You shall not pass, he seems to say
While I am looking for a way
To smell the green grass one more day.
What shall I do?
I must decide.